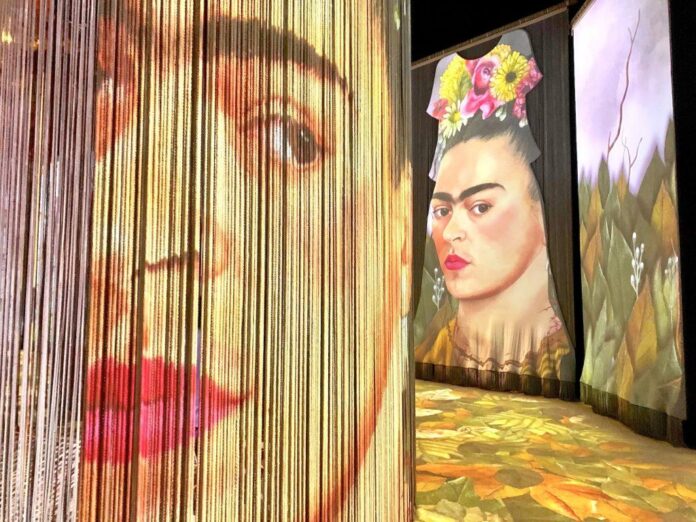 Would Frida Kahlo have liked “Frida: La Experiencia Inmersiva,” the snappy immersive-art experience currently at the Foro Polanco in Mexico City? I can’t definitely say no. Kahlo was a complicated person, obsessed with promoting a personal legend but also passionately politically concerned.

What does Kahlo’s leap to immersive-art status suggests about contemporary “Frida-mania?” “Frida: La Experiencia Inmersiva” has the stamp of approval of the Kahlo family itself (as does “Immersive Frida Kahlo,” another Frida attraction open at cities across North America). Keep in mind, though, that that’s the same arm of the family that announced last year it was planning a Frida Kahlo and Family Metaverse (supposed to launch in Q2 of this year, but so far quiet).

About 45 minutes in length, this immersive Frida experience fills two large chambers (there is also a side chamber with extra selfie ops, kids activities, and interactive, Frida-themed games). The walls are animated with high-res, super-scaled projections featuring swirling images culled from Kahlo’s Greatest Hits, from the (1939) to the (1944) to her funny final painting, a still life of a watermelon with the words “Viva la Vida” (Live Life!) carved into it.

Images are animated and repeated so that crowds can enjoy versions of the same show wherever they roam in the galleries. Foliage sprouts and moves. The atmospheres of her paintings change from day to night.

The giant central figures are occasionally overrun by tides of paintbrushes, human hearts, chairs, or nails. Sometimes these animated swarms leave only the eyes of Frida or Diego Rivera peeking out, unintentionally evoking that meme of a frozen Homer Simpson sinking backwards into a hedge in embarrassment. Warm, twinkly music plays. 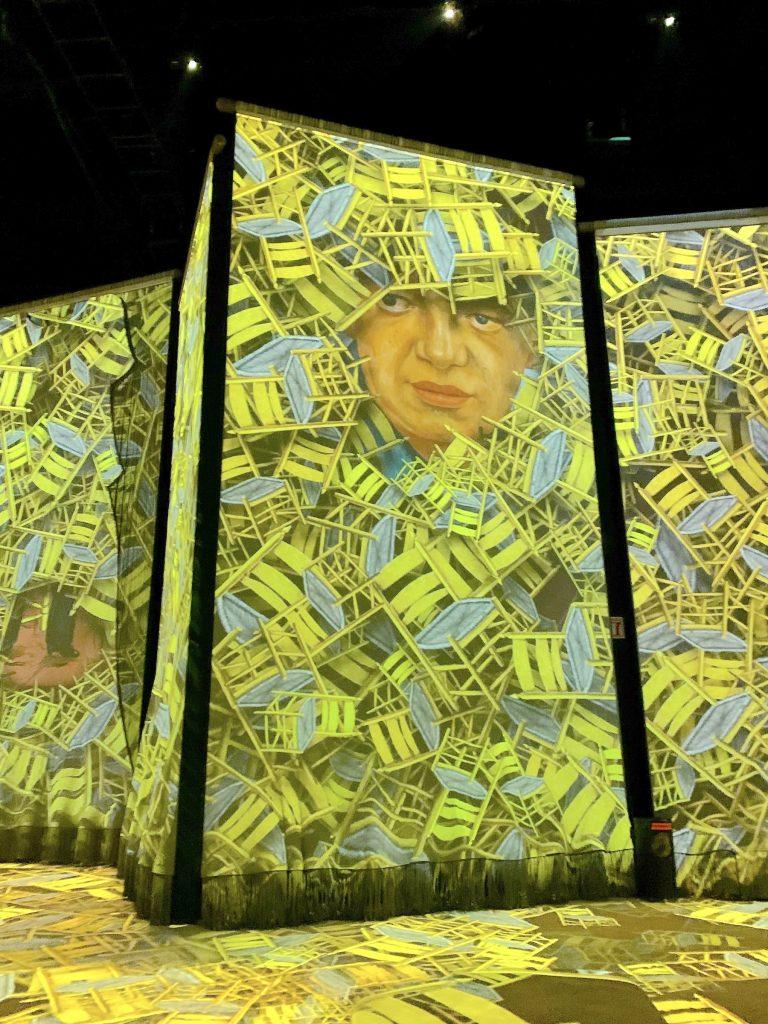 A smattering of Kahlo quotes on the soundtrack provide an atmosphere of biographical communion. These hit the familiar, big beats of Frida lore: the accident that left her in pain for life, her all-consuming passion for Diego, her shame at his affairs. It ends with a quote, spoken in the tone of a wise and mischievous grandmother: “No vale la pena irse de este mundo sin haberle dado tantito gusto a la vida” (something like: “It’s not worth leaving this world without getting a little pleasure from life.”)

Like “Immersive Van Gogh,” which it closely echoes in style, “Frida: La Experiencia Inmersiva” does the job it sets out to do just fine—providing an efficiently spectacular version of visual art mythology and a family-friendly break in the air conditioning. Just as Vincent Van Gogh has been refined by media culture into his most marketably simple idea of “tortured genius,” so Frida Kahlo has been refined down to “passionate woman.” 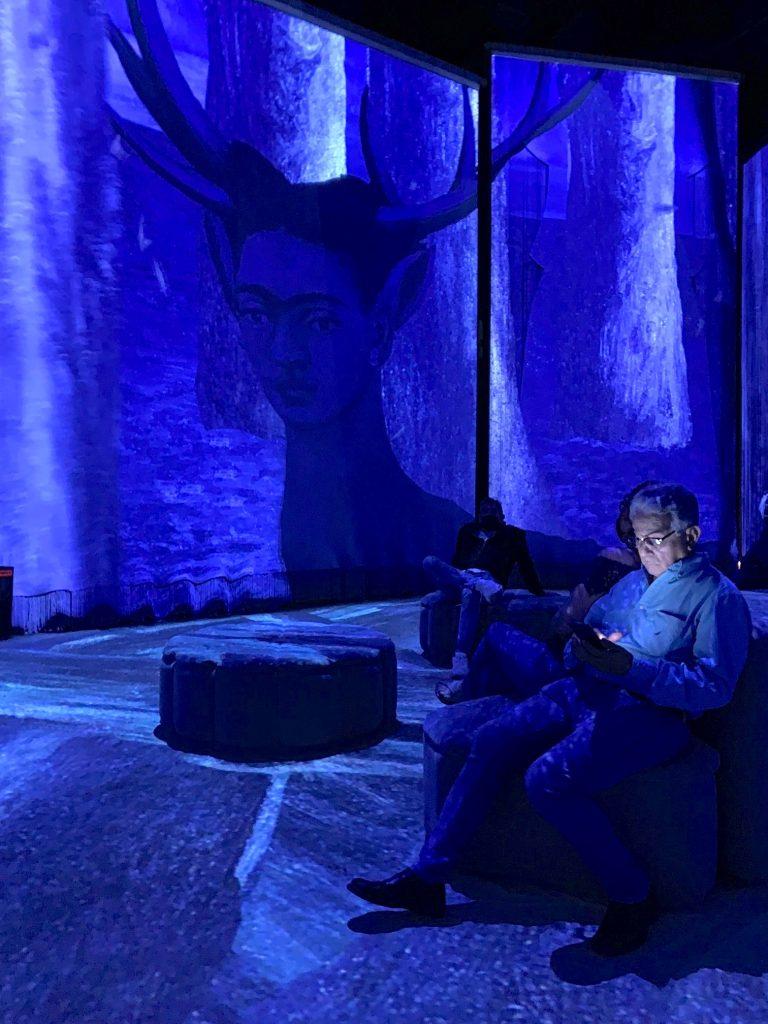 This particular immersive Frida doesn’t really make much of an effort to tell Frida Kahlo’s actual story—but then, the new Batman movie doesn’t bother to re-tell Bruce Wayne’s origin story either. The whole point of contemporary IP-driven blockbuster media is to feed you stuff that’s so familiar that you don’t have to do the work of learning about it. Instead you can just enjoy watching it creatively re-interpreted.

In Mexico City, Frida Kahlo is more than familiar, of course. Dolls and tchotchkes with her likeness are sold everywhere; she gazes out from murals and T-shirts, in cutesy cartoon form. But there’s also plenty of Frida easily available that gives a sense of the tougher, less marketable political side that almost every modern-day version of “Frida-mania” seems hellbent on burying in kitsch.

Go to see Diego Rivera’s famous mural cycle at the Secretariat of Public Education. In it, there’s an image called , from 1929, centered on the image on Frida in a red worker’s shirt, with a Communist red star on it, handing out guns to the workers. The Soviet flag flaps behind her. 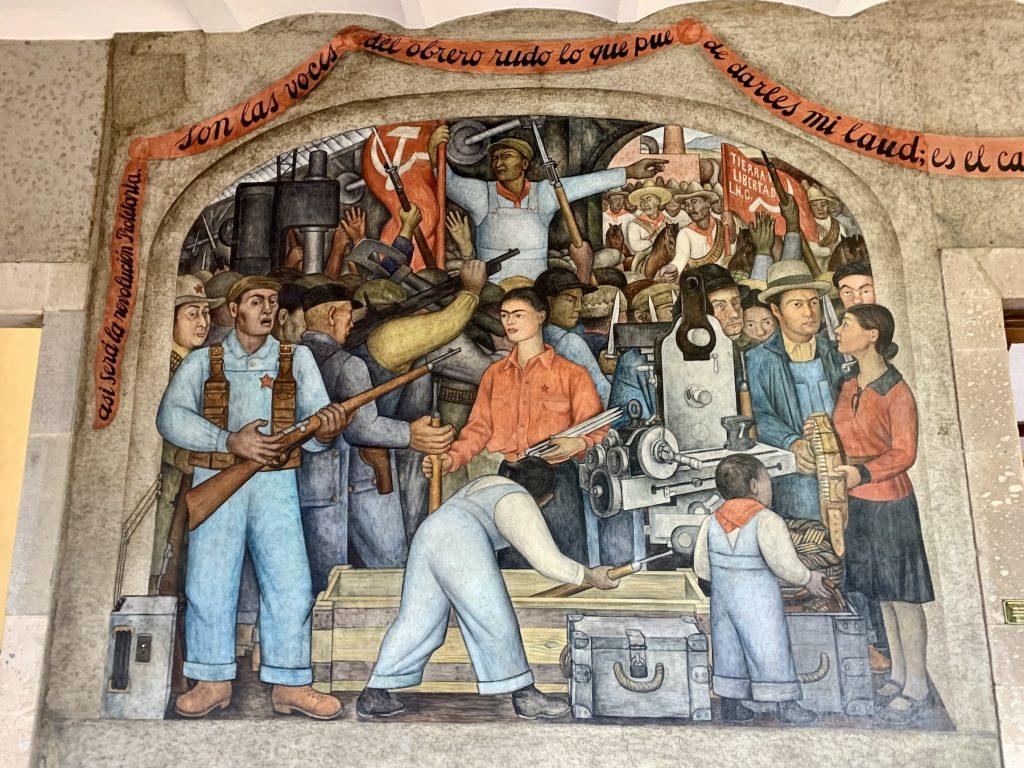 Even at the underwhelming, over-touristed Frida shrine that is the Casa Azul, where they sell all manner of inoffensive Frida merch, they still preserve her bed complete with the five photos that looked down on her at night, like saints watching over her sleep: Marx, Engels, Lenin, Stalin, and Mao. When I was there for my timed-ticket slot, the American tourist in front of me was loudly angry to discover that Frida was a Marxist. “You know, I read this shit in college—but I’m a grown man now, and it’s not cute anymore!” he snapped at his girlfriend.

No one is going to have any similar unwanted epiphanies during “Frida: La Experiencia Inmersiva,” which is sponsored by a bank, Citibanamex.

Defending the “political Frida” from the “commercial Frida” is by now its own critical trope. But the subject of Frida’s politics is also a knotty one, and I wouldn’t trust Citibanamex or its immersive art engineers with its intricacies. Usually, it runs in the direction of a simple heroization of the “political Frida.” But her politics were complex and contradictory. For instance, Frida was an anti-Stalinist, and then an ardent Stalinist by her final days. (She returned to the Mexican Communist Party, Hayden Herrera argues, because its vision of a muscular, actually existing world Communism offered an image of strength that served a psychic function for her as her own body failed.) 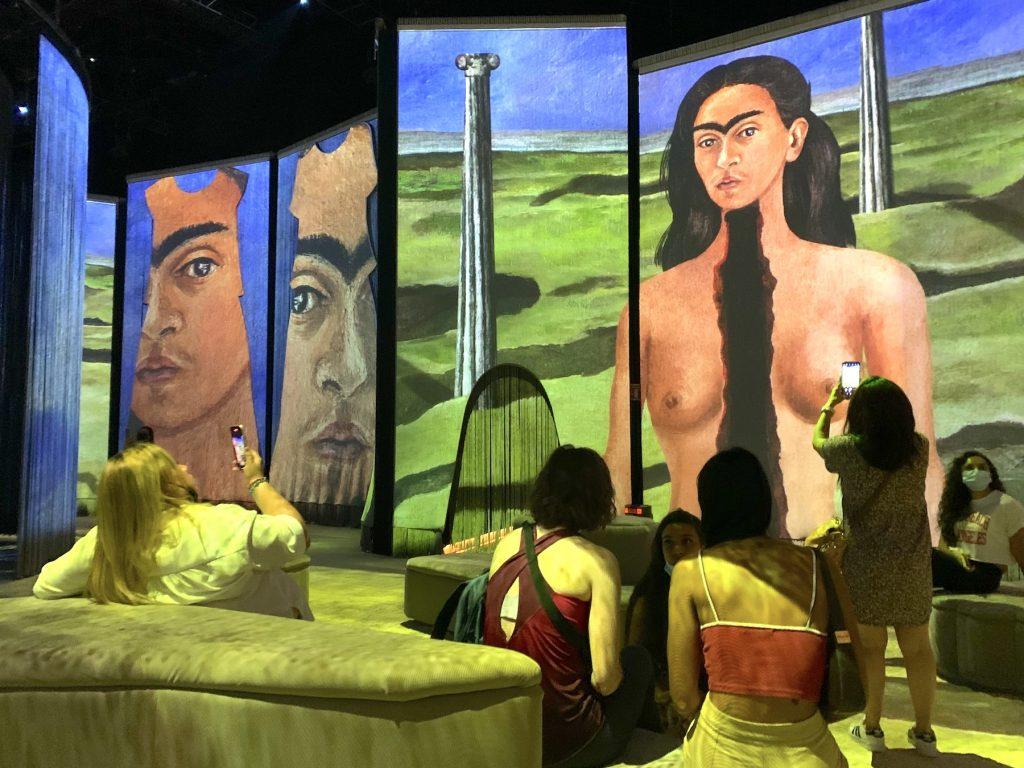 You might actually be able to create an immersive show that gave a sense of Kahlo’s complexity—but this would require some creativity and thoughtful engagement with history, which would risk harshing the audience’s mellow. It would also require breaking with some of the emerging “immersive art” clichés, which favor free-floating atmosphere and pre-digested storytelling.

The intro text that greets you outside “Frida: La Experiencia Inmersiva” all but says that it expects its audience to mainly come to the show primed by the 2002 Salma Hayek movie, (which, incidentally, some Mexican critics criticized at the time for its glammed-up Hollywood treatment of the artist). It states:

What does this mean—taking the “emotional path” into Frida, as opposed to the “biographical” or “historical” paths?

Maybe because we’re already talking about how present-day Hollywood processes art, my immersive Frida experience made me think of an article by critic Alison Willmore, who asked recently in Vulture: “is Jane Austen just a vibe now?” Willmore looks at the contemporary “Jane Austen industrial complex” (but specifically the new Netflix ) and how a set of tropes—“bonnets, walks in the countryside, sessions of piano playing in the parlor, a vague sense of a stuffy British accent”—have come to crowd out the intricate psychological and social observations that have made Austen’s actual books so lasting.

“Frida: La Experiencia Inmersiva” in Mexico City makes me think that immersive experiences are possibly best understood as agents of a similar process—or maybe what happens when this process takes its final form. They are a preeminent contemporary technology of vibe-ification.