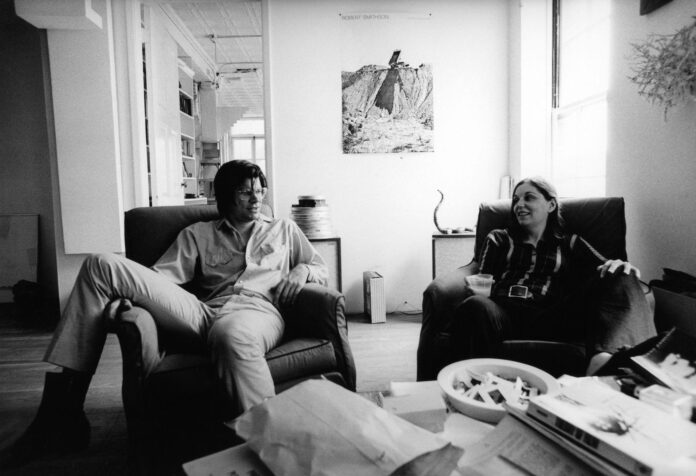 When Nancy Holt, a visionary of the Land Art movement, died in 2014 at age 75, she willed into being a foundation that would preserve her legacy as well as that of her husband, the artist Robert Smithson (1938-1973). The Holt/Smithson Foundation has since focused on the duties traditionally required of any artist-endowed foundation, including increasing access to their work. But it is also concerned with complicating the art and ideas of its namesake artists, whose monumental interventions such as Holt’s Sun Tunnels (1973-76) and Smithson’s Spiral Jetty (1970) have left indelible marks on the landscape.

“We know, without question, there are issues and problems with Nancy Holt’s work and Robert Smithson’s work,” Lisa Le Feuvre, the foundation’s executive director, says. “There’s an ethical imperative to ask difficult questions. To ask, what was their relationship to their land? How do we think about earthworks in light of the imperative to look at the politics of land, to look at Indigenous land rights, to look at ecology and climate change?”

The foundation hopes to encourage such questions with a new, ten-year programme that is simple in concept but sure to provoke debate and even discomfort in some. This autumn, it will launch an annual lecture series that invites artists, writers and other thinkers to respond to Holt and Smithson’s art. Each will occur at a location with significance to the artists, beginning with the Whitney Museum, where Holt donated many works from her personal collection. The two artists also lived in the West Village, a few blocks from the museum’s present location.

“This programme is an invitation to frown over what the legacies of Nancy Holt and Robert Smithson might be,” Le Feuvre says. “It’s really thinking through what their work means in the present. We really want to move away from the idea of pickling Holt and Smithson in the 1970s, because their work endures.”Inaugurating the series is the art historian Anne M. Wagner, who on 3 November at the Whitney will discuss the politics steeped in the sites and places where Holt and Smithson situated their works. The writer Rebecca Solnit will speak next year at the New Mexico Museum of Art in Santa Fe, where the Holt/Smithson Foundation is based. In 2024, the Utah Museum of Fine Arts will host the lecture, by a speaker the foundation has yet to name. Not every host site will necessarily be a museum, Le Feuvre says, adding that she is fixated on the idea of holding a lecture outdoors, perhaps in the New Jersey Pine Barrens, which Holt and Smith frequently visited and engaged with.

The programme arrives in the foundation’s fifth year, which marks one quarter of its lifespan. Operating with a sunset clause, the organisation is designed to exist for 20 years, until 2038—a century from when both Smithson and Holt were born. “We always knew that we wanted to be a short-lived foundation,” Le Feuvre says. “And the moment you make that decision, you’ve got this incredible luxury of needing to be very clear about what your values are, and what is really important.”

Among its initiatives to critically explore Holt and Smithson’s works are artist commissions, such as The Island Project: Point of Departure, which invites five artists to develop proposals in response to an island in Maine that the couple purchased sight-unseen. Tacita Dean, Renée Green, Sky Hopinka, Joan Jonas and Oscar Santillán will develop their ideas over the next four years. The Foundation is also working with Layli Long Soldier on a poetry commission inspired by Smithson’s Spiral Jetty, as part of the World Weather Network, a coalition of international arts organisations documenting climate change through art.Highlighting Indigenous voices is “absolutely essential to everything that we do”, Le Feuvre says, especially considering the legacies of Holt and Smithson in the context of American expansionism and settler colonialism. Still, she is cautious of virtue-signalling and simply asking Indigenous thinkers to confront problems instigated by two white artists.

“We don’t want to use Native voices, Indigenous voices, to somehow justify Holt and Smithson’s work,” she says. “We’re interested in those voices interrogating and saying, ‘This work is a problem.’ And for us at the Foundation, we will answer: ‘Yes, it is. Let’s think about it.’”