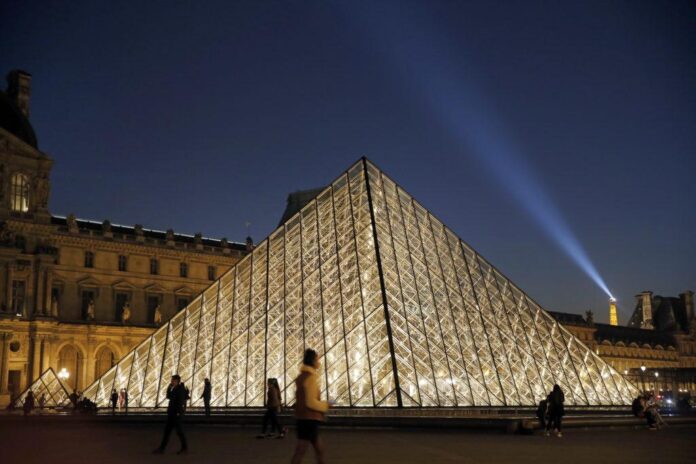 Along with the Eiffel Tower turning off its sparkling lights earlier every evening, the Louvre’s pyramid and other monuments around Europe are responding to the ongoing energy crisis with a variety of measures that range from the symbolic to the practical.

This week, French culture minister Rima Abdul Malak said on France 2 television that the Louvre’s iconic glass pyramid would no longer be lit after 11 p.m. The Chateau of Versailles was up next, she said, with lights out by 10 p.m.—an hour earlier than usual—starting next week.

Across Europe, fears of facing the coming winter, amid soaring energy costs and possible blackouts, have pushed governments to call for unified, belt-tightening efforts to reduce energy consumption. Some are also offering spending caps on electricity and gas bills, as was announced on Wednesday in the UK.

Cultural institutions and monuments have been singled out as focal points for implementing these new, power-saving tactics, as they struggle to deal with soaring energy costs. Some are even considering closing their doors to the public, at least part of the time.

“We welcome the six-month energy price cap [announced by the UK government today], which should help museums in the short-term get through the winter period,” said Sharon Heal, the director of Museums Association, representing 1,800 UK institutions, in a message to Artnet News. “However, it is only a temporary fix and will not address the systemic underfunding of the sector over the past decade.”

Heal notes that while some UK cities suggest museums serve as “warm banks,” or shelters from the cold, that may be less feasible as “some institutions are considering reducing opening hours or site closures if anticipated price rises materialize.”

“Many museums across the UK have pledged to open their doors as warm, safe spaces for their communities over the winter,” Heal added, since they are “ideal places to provide this service… But in order for us to do that we need to be able to keep the doors open.”

In Germany this week, state and federal leaders in the cultural sector met to underline the importance of cultural institutions in collective, “social self-understanding,” and to ensure they are supported during the current crisis.

The group, including German culture minister Claudia Roth, identified which institutions are part of a so-called “critical infrastructure,” or “cultural assets of great importance for cultural heritage,” to be prioritized with aid in case of a gas emergency. Plus, funds originally slated for cultural events will go towards alleviating rapidly increasing energy costs in targeted cases.

“Only together, with all of our expertise and strength, can we master the major challenges [ahead],” said German Culture Minister Claudia Roth in a statement following the meeting.

As it tries to wean itself off its heavy dependence on Russian gas, Germany is leading the charge in terms of drastic cutbacks to gas consumption, by about 21% since last year. Some analysts say that level of collective effort could keep Europe’s largest economy from running out of gas in the near future. This month, a new German law went into effect to ensure that happens.

The measure restricts heating of public buildings to a max of 19° C (66.2° F), while rooms and passageways are to be kept unheated. The initiative also forbids monuments be lit at night, except for emergency purposes and special events. Meanwhile, the German museum umbrella group, Deutsche Museumsbund has amassed a list of practical, energy-saving tips for art institutions to follow.

This summer the French government also called for “sobriety” measures to reduce energy consumption by 10% for 2024. Similar to their German neighbors, room temperatures under public jurisdiction are to be kept at a max of 19° C in winter, and no less than 26° C (78.8° F) with air conditioning in the summer. Abdul Malak announced that she had sent a questionnaire to cultural venues across the country to request “proposals and suggestions for the management… of the energy crisis,” with her ministry issuing its concluding analysis later this month.

Some museums are already leading by example. The Musée d’Orsay and the L’Orangerie in Paris told Artnet News it has reduced energy consumption by 15 percent over the first eight months of this year, versus 2021. Those results were mainly achieved by progressively changing all the museums’ lighting to LED bulbs. “The main energy costs in a museum like Orsay are linked to lighting and maintaining consistent climatic conditions in line with international conservation norms,” said a museum representative.

In 2023, the museum’s energy bill is expected to jump to 12 percent of its total budget, or more than $3 million, versus 5 percent of the 2022 budget. “Our ambition is to reduce our energy consumption by 25 percent by 2024, thanks to significant investment dedicated to ongoing LED installation, and the modernization of technical equipment controls,” the museum added.

The Orsay and other historic monuments, however, point out they were not originally designed to serve as museums, making them less energy efficient. The Orsay, a former train station, will propose “significant renovations” as a result.

The same is true in the UK. “Many museums are housed in historic buildings. They are not energy efficient and are costly to run, heat and maintain,” Heal said. “In the medium term we need investment to support museums to become more energy efficient and environmentally friendly, so we can reduce our carbon footprint and create sustainable futures for our organizations and our communities. And we need strategic long-term investment that addresses the issues caused by underfunding.” The Museum Associaton found that between 2010 and 2020, spending by local authorities on museums and galleries dropped 27 percent in real terms.

The more modern Centre Pompidou, on the other hand, was conceived as a museum, and has been regularly reducing energy consumption over the years. In response to the current crisis, the museum said it would turn off the lights on its façade as soon as it closes to the public, at 10:30 p.m. Only security lighting will remain on, while “other measures are being examined,” a museum spokesperson told Artnet News, noting renovations planned for after the 2024 Olympics will permit a 40 percent reduction of energy.

The museum’s programming joins others such as the Bourse de Commerce, Pinault Collection, in addressing environmental issues this fall.

“All together,” a Louvre spokesperson told Artnet News, “that represents 1,160 tons less CO2 emissions per year, the equivalent of 10,000 trips from Paris to Marseille by car.”

‘Tis the Season to Sparkle: New York Auction Houses Roll Out Their Finest Jewels for the Holidays