Home News A single owner sale of works by Gertrude Abercrombie may bring her... 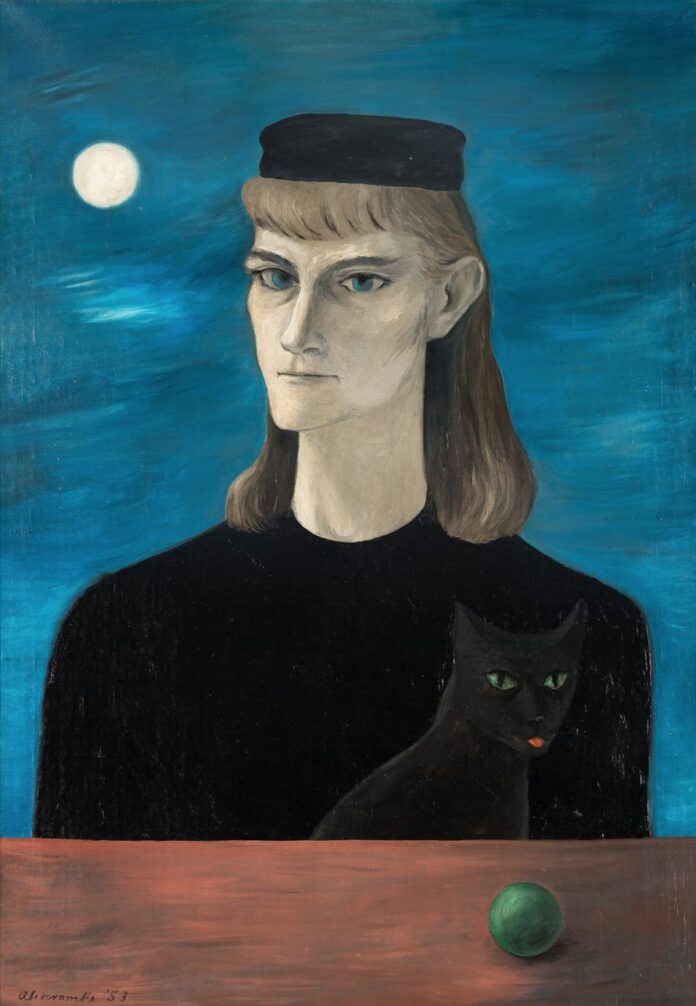 It seems that the art world has finally caught up with Gertrude Abercrombie. While her work has always been well regarded, until recently the market had failed to fully appreciate Abercrombie’s charming and delicate Surrealist works. That changed in February this year, when Chicago’s Hindman Auctions sold her small painting The Dinosaur (1964) for $387,500 (with fees) against an estimate of $30,000-$50,000, marking a worldwide artist record. With the recent surge of interest in Surrealism it is no wonder that Abercrombie’s work is being looked at more closely (even if one needs a magnifying glass to do so).

In September, Hindman will bring to the market Casting Spells: The Gertrude Abercrombie Collection of Laura and Gary Maurer. The single owner, single artist sale will see 21 of Abercrombie’s most significant works, including the mystical Self and Cat (Possims) (1953), one of the physically largest works by the artist, who is known for minute and richly detailed paintings that can sometimes be no larger than a postage stamp.

The recent interest in Abercrombie’s work largely stems from works in the very collection that is going up for auction. In 2018 the Maurer’s entire collection of pictures by Abercrombie was shown at the Elmhurst Museum of Art in Wilder Park, Illinois and then at Karma Gallery in New York City. Karma produced a large book on Abercrombie’s work and, according to Joseph Stanfield, Hindman’s vice president of Fine Art, “her market was sort of changed overnight. Works that were worth five or six thousand began selling for twenty, thirty or forty thousand. Almost overnight.”

The sale features works from throughout her career, from the late 1930s to the 1970s. And while almost all of Abercrombie’s work could be considered a self-portrait, albeit by means of her personal belongings or the otherworldly landscapes that inspired her, Self and Cat (Possims) (1953) stands out. The artist confidently stares at the viewer, perhaps with the knowledge that she is aware of something they are not. Behind her the moon glows high in a bright but starless night. Most appealing is the painting’s depth. Gradients of black betray the detail, and only upon a second glance does Possim, Abercrombie’s black cat, appear in the frame, red tongue only slightly visible and green eyes echoing the green orb on the table, which itself echoes moon in the paintings opposite corner.

At 34in by 24in, the painting is by no means overly large, but the size, unusual for Abercombie, makes plain where the artist may have looked for inspiration. “For Gertrude Abercrombie, it’s a big work and to me it’s so heavily influenced by Renaissance art,” Stanfield says. “It sort of has Leonardo’s Woman (Lady) with an Ermine look to it, and a very potentially a Netherlandish or early Flemish primitive look. If someone is interested in Renaissance art, I feel like this may captivate you more than some of her work.”

Casting Spells: The Gertrude Abercrombie Collection of Laura and Gary Maurer at Hindman Auctions on September 28