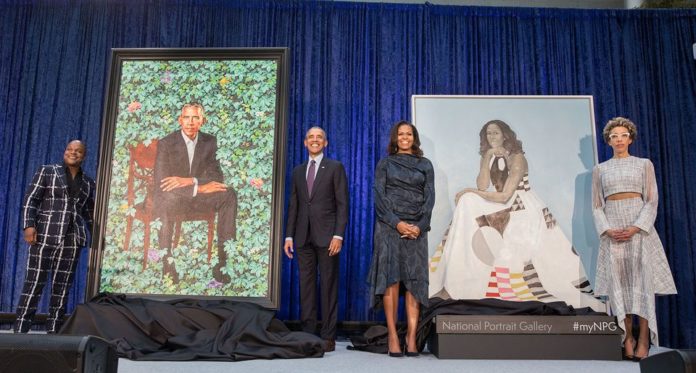 The Smithsonian’s National Portrait Gallery in Washington, D.C., which was created in 1962 by an Act of Congress, is the only location outside of the White House with a collection of portraits of former United States Presidents. Today, Barack and Michelle Obama unveiled their likenesses, created by Kehinde Wiley and Amy Sherald, respectively. The Obamas selected the artists—Wiley and Sherald are the first African American artists to be commissioned for presidential portraits.

Former US President Barack Obama joked about being a difficult, impatient model at the unveiling of his and First Lady Michele Obama’s official portraits this morning (12 February) at the Smithsonian’s National Portrait Gallery in Washington, DC, adding that he opted to forego Kehinde Wiley’s idea of posing him on a horse, dressed in regal attire. “I had to explain that I’ve got enough political problems without you making me look like Napoleon,” Obama said. “We’ve got to bring it down just a touch.”

Wiley, however, assured us that such a grandiose scene was never in the cards. The portrait instead shows the 44th president pensively seated in a chair surrounded—and sometimes obscured—by foliage that provides a botanical mapping of his life. Kim Sajet, the director National Portrait Gallery where the painting will join the historic collection of presidential portraits, surprised her staff by quickly recognising the flora in Obama’s painting. “I’m an avid gardener so I knew, ‘Oh, that’s an agapanthus,’” she said. African blue lilies reference Obama’s Kenyan father, jasmine represents Hawaii, where he grew up, and chrysanthemums, the official flower of Chicago where he started his political career as a community organiser, appear as well. 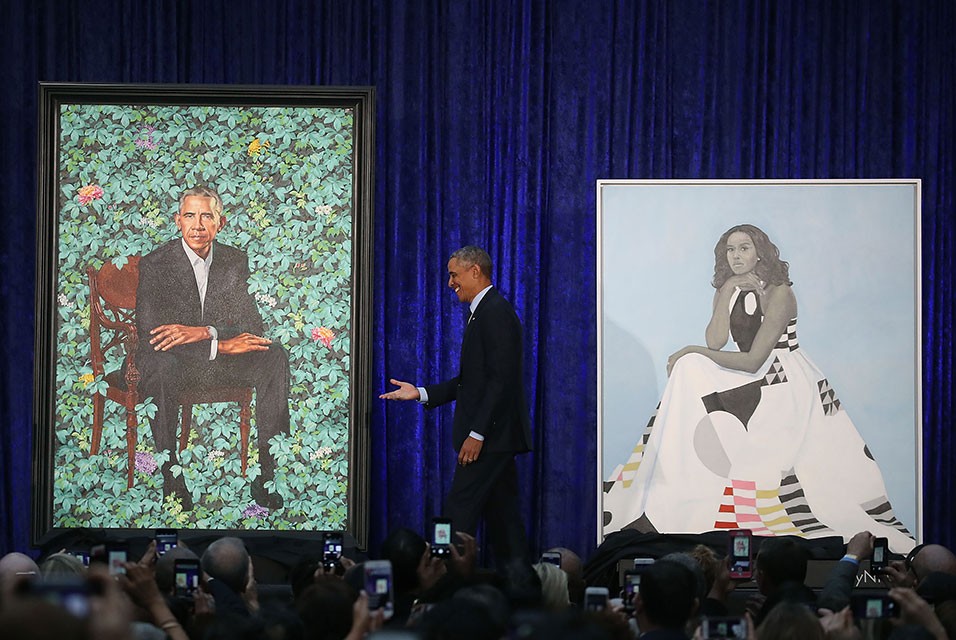 While discussing the portrait, President Obama said he found he shared some personal experiences with Wiley, including African fathers who were absent from their lives and American mothers who raised them with “extraordinary love and support”. Wiley also saw similarities: “He and I both have this kind of double narrative going on,” the artist said in an interview after the unveiling. “That was more fascinating than creating a stodgy old version of a presidential portrait.” And while speaking on stage, Wiley was moved to tears when talking about how his mother, who was in the audience, raised him in South Central Los Angeles. “We didn’t have much,” he said, “but she found a way to get paint.”

The Baltimore-based artist Amy Sherald, who painted Michelle Obama’s portrait, was equally emotional while thanking her mother at the event. She also spoke movingly to Michelle about how she inspires others. “What you represent to this country is an ideal, a human being with integrity, intellect, confidence, and compassion,” Sherald said. She explained that the portrait, which depicts the former first lady in a billowing dress designed by Michelle Smith, draws on the colour scheme and grids of the painter Piet Mondrian and the geometric quilts made by the women of Gee’s Bend in Alabama.

Wiley’s painting of President Obama will be permanently installed in the Portrait Gallery’s “America’s Presidents” exhibition, and Sherald’s portrait of Mrs. Obama will be displayed in the museum’s “Recent Acquisitions” corridor through November 2018. Sherald also has a solo show at the Contemporary Art Museum St. Louis, which opens May 11, 2018.