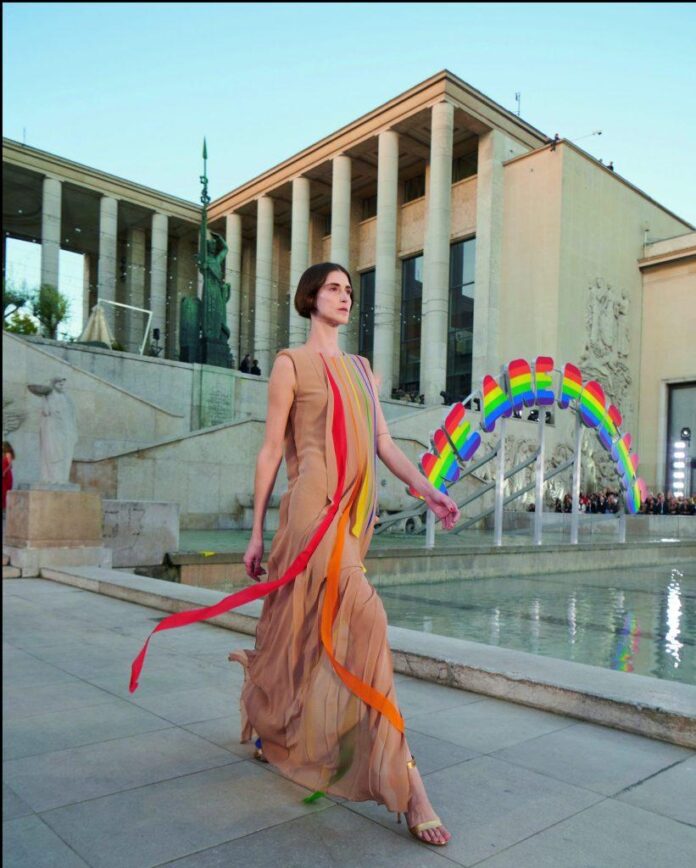 At last month’s Paris Fashion Week, Akris’s 100th anniversary Spring 2023 show was staged on the outdoor square between the Palais de Tokyo and the Musee d’Art Moderne—a fitting location for a brand that prides itself on being at art’s intersection. The outdoor fountains were appropriately festive for the occasion, adorned with a large Ugo Rondinone rainbow that read “We Are Poems.”

The sculpture had particular resonance for creative director Albert Kriemler, who frequently acts as an art curator in his role at Akris. “It has to do with his sensualness,” he said. “That’s how I see clothes. They should not only be looked at; they should be felt.” He added, “And the rainbow stands for everyone and everything. It’s an expression of a new horizon of hope and peace.” 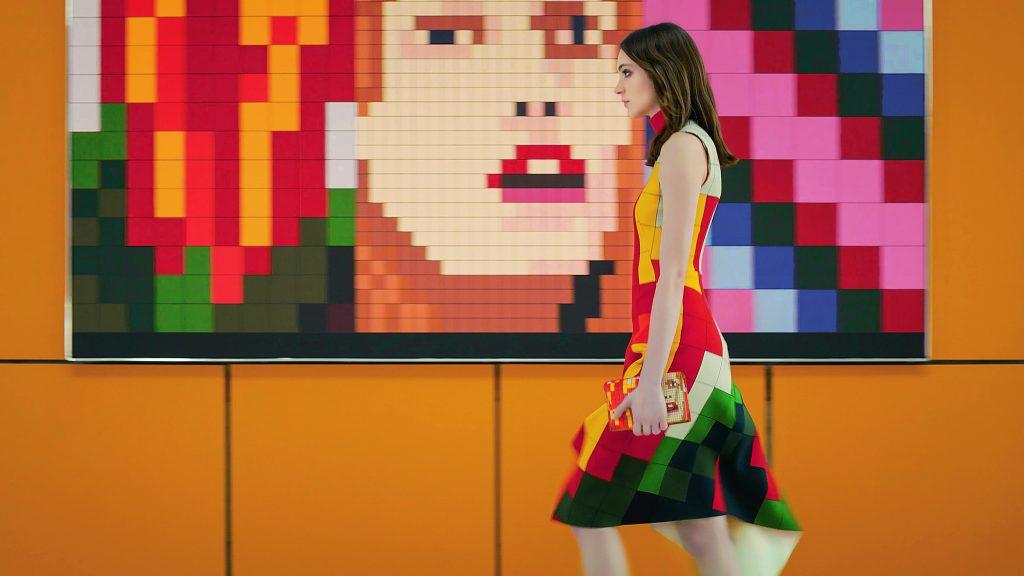 Albert Kriemler looked at Reinhard Voigt’s paintings for Fall ’22. “He was inspired by his mother’s cross-stitching. His approach was, ‘How much can I reduce an image without losing beauty?’ That’s how I see fashion. At the end, it’s a question of essential minimalism, but still keeping a value in it.” Courtesy of Akris.

The rainbow featured in the finale: a sand-colored dress with silk rivulets of the wafting spectrum. For the most part, the collection was a study in craftsmanship and restraint, but also time and timelessness. To celebrate the brand’s centennial, some archival pieces were interspersed into the show, including a chic 1978 cashmere wrap-coat that opened the show. They blended seamlessly and seemed just as modern as the new pieces. The retrospective book was released last month.

It’s hard to define what sets Akris apart every Paris Fashion Week. The Swiss brand specializes in minimalist luxury, but thrives on its otherness, slowly and steadily swimming upstream from the fashion continuum, its head down, ignoring everyone else, and doing its own thing. Most seasons, Kriemler collaborates with an artist or architect, with the resulting show serving as a visual aid-heavy entry in their oeuvre. 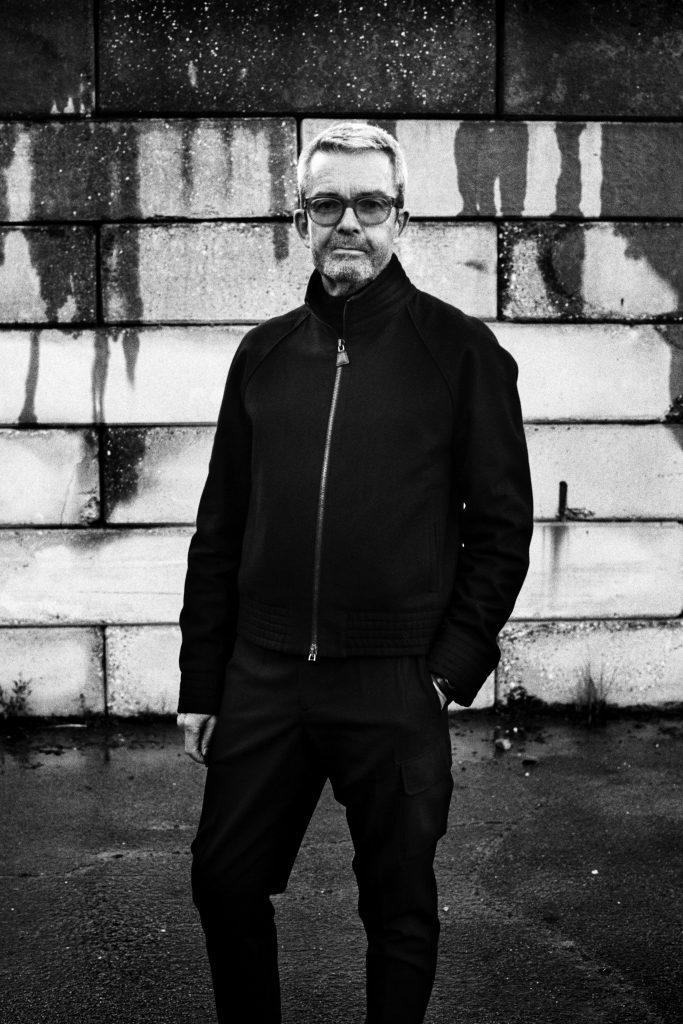 Art collaborations certainly aren’t exclusive territory for Akris, but Kriemler’s way of going about them is. He reaches out for an intellectual and heartfelt connection, instead of trying to forecast who the hip new NFT prodigy will be. He’s assembled a quirky and disparate list of brainy collaborators, a mix of heavy-hitter artists and architects, as well as under-the-radar creators he’s geeked out on. Kriemler has had a keen visual sense since his youth.

“I was always passionate about fashion,” he said. “I liked to draw from an early age. I accompanied my parents to fabric fairs when I was 15.” Kriemler has been at the helm of the company since 1980 when he was appointed creative director at 19. His grandmother founded Akris, which originally specialized in aprons, in Switzerland’s embroidery capital of St. Gallen, where it is still headquartered. Albert’s brother Peter is Akris’s president. 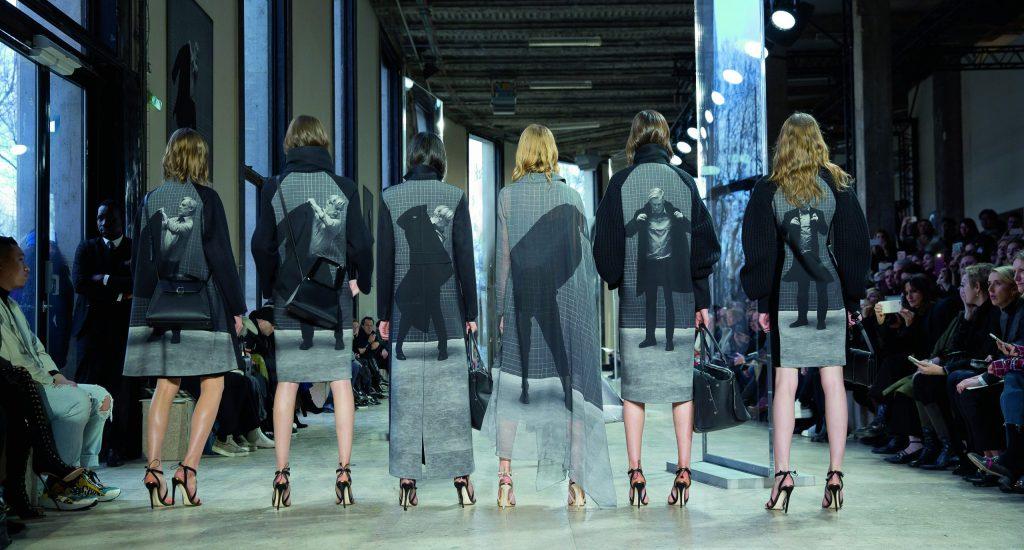 Art first became intertwined with Akris when the brand started showing on the Paris runway in 2004. Kriemler had been vying for a coveted place on the Paris calendar since 1996, but had been turned down by the Fédération de la Haute Couture et de la Mode. Akris was finally accepted after regime change at the institution. “I realized I had to do more than just showing my collections,” Kriemler said. “We’ve always stood for timeless, modern, wearable clothes. But I had to get additional messaging. The first collection was dedicated to Félix Vallotton. He was this Swiss artist and not respected in his lifetime in Paris. I saw this as a perfect metaphor.”

This new path of inspiration unlocked a rebirth for the brand and creative passion for Kriemler. He has shaped Akris into an international player and ongoing art project. Sitting in front of a large picture window on the second floor of the New York flagship, he chatted about 100 years of Akris and some of his favorite art crossovers. 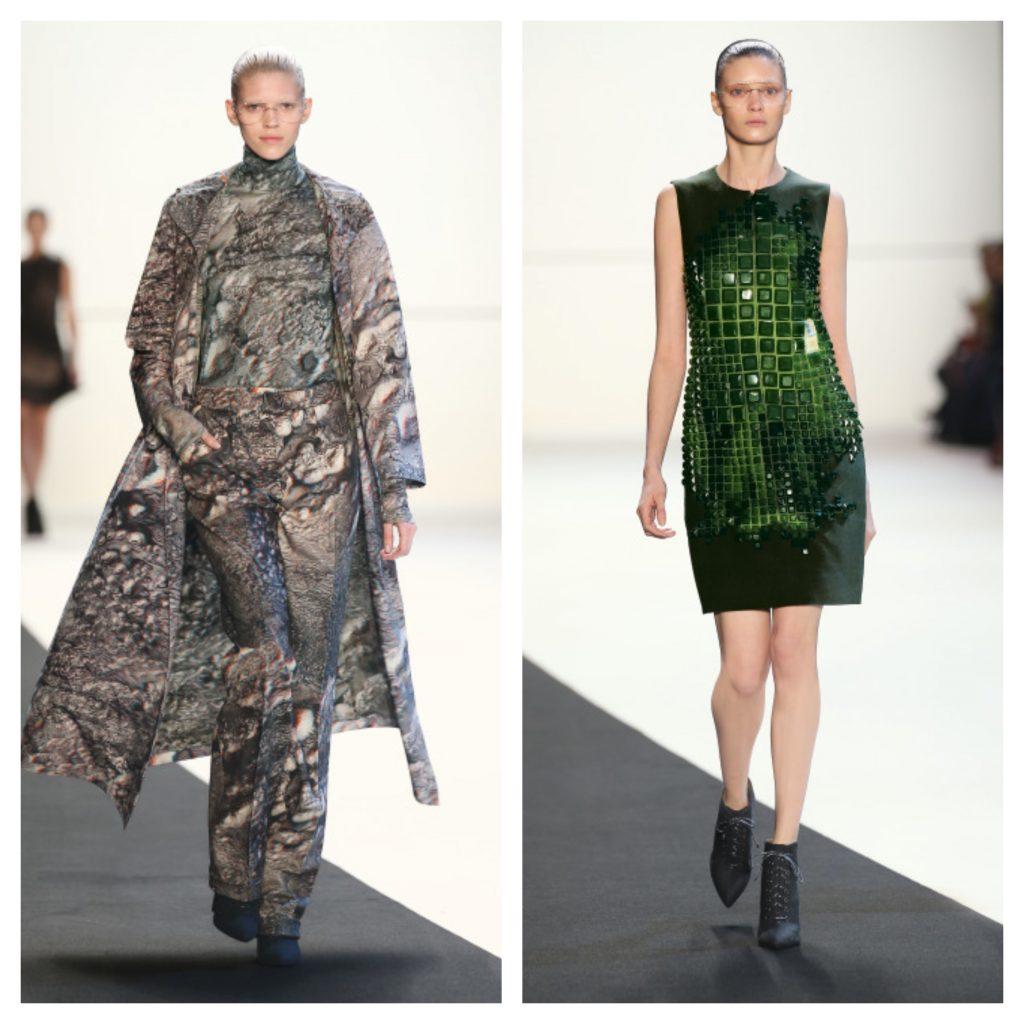 “I saw Thomas Ruff‘s retrospective [Works 1979-2011] at the Haus der Kunst in Munich, and I knew I’d design a collection inspired by him. He’s been a friend for over 40 years, but also one of the most important photo artists of our time. He said, ‘I’m not a fashion designer, but come here and we will discuss.’ I selected seven works, mostly out of his galaxy and universe photos, the Cassinis, which couldn’t be done today anymore because the Cassini burned up, so this was an interesting work group. 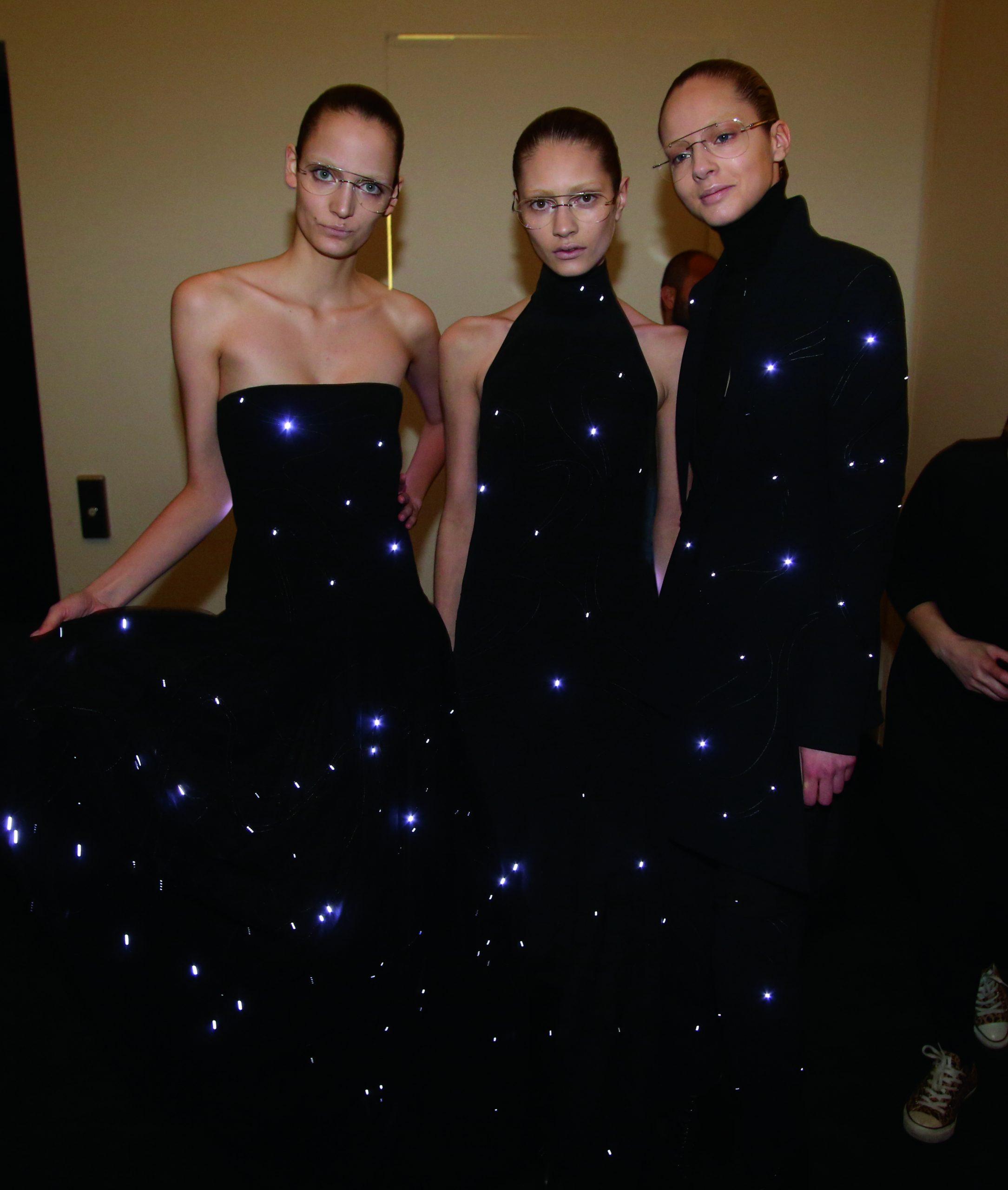 “Every month, I went to his studio in Dusseldorf. He was totally involved in the fabric development and then the silhouettes. When you work with an artist, you’re most concerned that he feel respected. It’s fabulous when you can work with an artist’s work and make him happy too.” 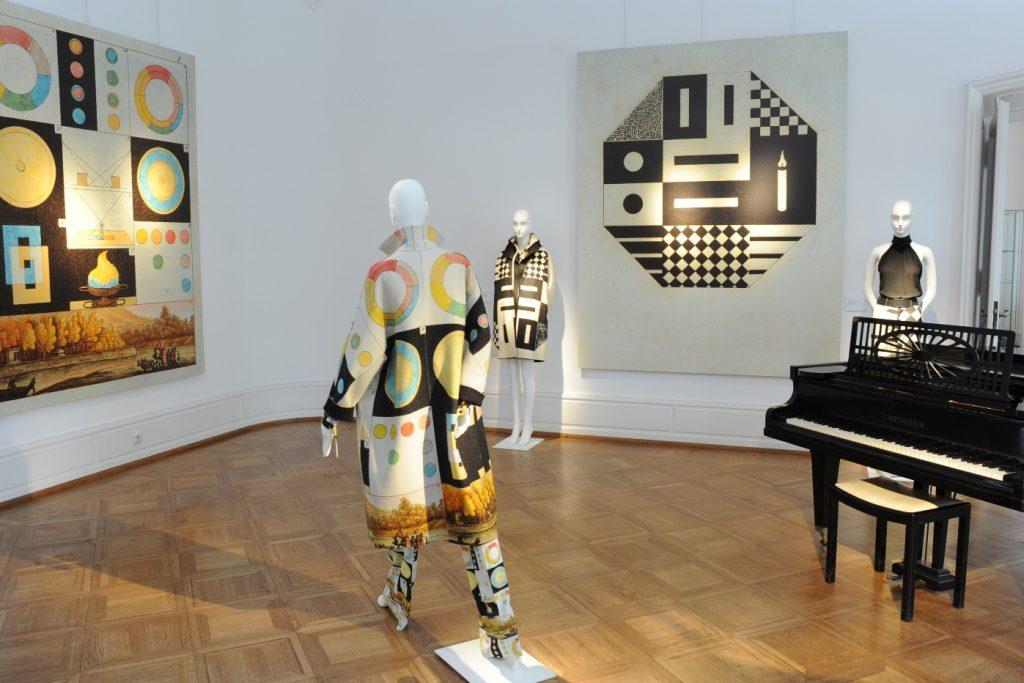 An installation view of “Farbenlehre for Fashion! Akris & Goethe.” Courtesy of Goethe-Museum Düsseldorf.

“I did this collection with a lot of items out of horsehair fabric, which is pretty amazing. It takes color in such a great way when you dye it, comparable to cashmere. And it’s a sustainable fabric because, principally, the horses just go to the hairdresser, you know? It’s one of the most valuable natural fiber fabrics still woven using weaving machines created in 1884. I wanted something more out of this period, and then I discovered his Farbtafel tables. They had such utmost modern graphism and fabulous colors that I reached out to the Goethe Museum to collaborate.”

“This man has an incredible sense of color. It’s very difficult to get in touch with Imi Knoebel. He’s really shy and he doesn’t want an audience at all. He doesn’t care. He doesn’t want to speak about his art. He thinks, ‘My art has to speak for itself, and any explanation is obsolete.’

“His studio has about 800 different colors that he develops and mixes himself. It was a joy to work on this collaboration during the heavy lockdown. Imi once explained to me that he calls himself a craftsman rather than an artist, and that the only answer to what you think when you look at his paintings can be: Don’t think at all.” 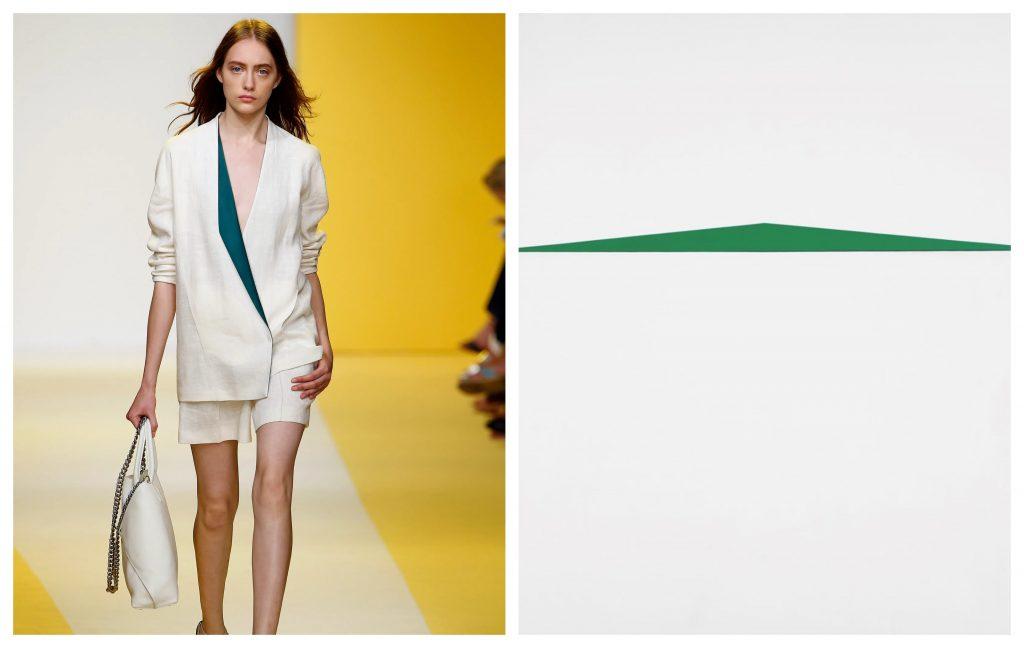 “I was on a tour with [museum director] Adam Weinberg through the Whitney and it was wonderful seeing Ellsworth Kelly, Agnes Martin—all the most striking American minimalism. Then there was that painting from Carmen Herrera. The second he told me she was still alive, I was so tempted by that delicate triangle in a fantastic green color. And to see these color combinations, white and green in the ’50s! I found that quite striking. She never got the recognition she deserved because she was a woman. She lived on 19th Street and I dropped by on her 101st birthday. She was in a wheelchair. I designed the collection and we showed in September, the same month she had her first retrospective.”

Etsu Egami Is a Breakout Star at Auction—and She’s Not Even 30. But Her Supporters Worry All That Success Could Backfire