Home News The ‘House of the Dragon’ Set Artist on How Pompeii and Medieval... 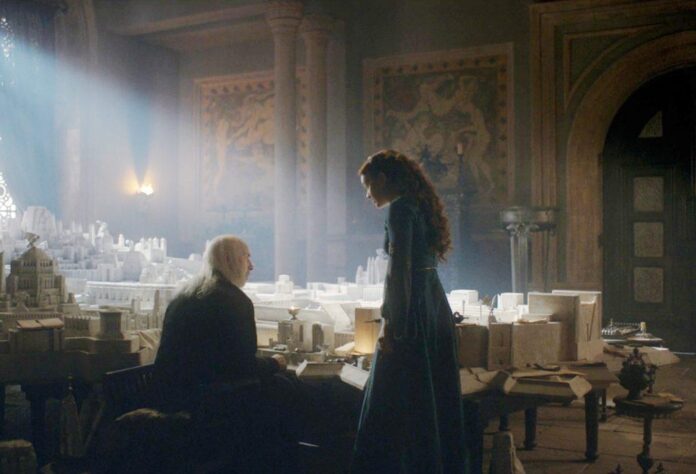 From those curious instructions, Harris would go on to paint massive wall panels for select rooms in the Red Keep, the seat of the king, backgrounding the show’s palace intrigue with uniquely sexually charged images. Or, in the words of fansite Westeros.org, “pornography kind of strewn all over the walls.”

It’s fitting though for a show inspired by  , the world-dominating HBO production that ran from 2011 to 2019, and pioneered “sexposition” (that is, expository dialogue delivered mid-coitus). As a prequel, the new HotD set forth the royal succession drama that would envelop and ultimately decimate the Targaryen dynasty, members of which are flagrantly incestuous and recognizably powerful for their command over dragons. 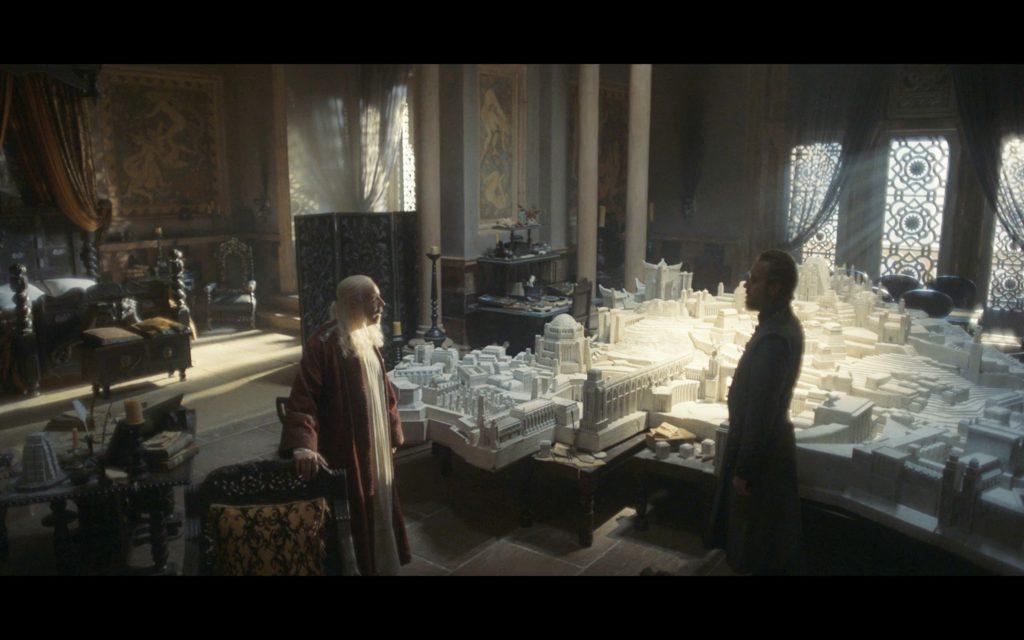 The paintings can be found across the royal residence where plots are hatched to usurp the Iron Throne, where political bonds are formed and betrayed, and most pointedly, where a queen died in childbirth. In episode five, as the new queen, a non-Targaryen, questions a Kingsguard about the princess’s sexual indiscretions, she does so primly without once uttering the word “sex,” allowing the racy mural behind her to do the heavy lifting. 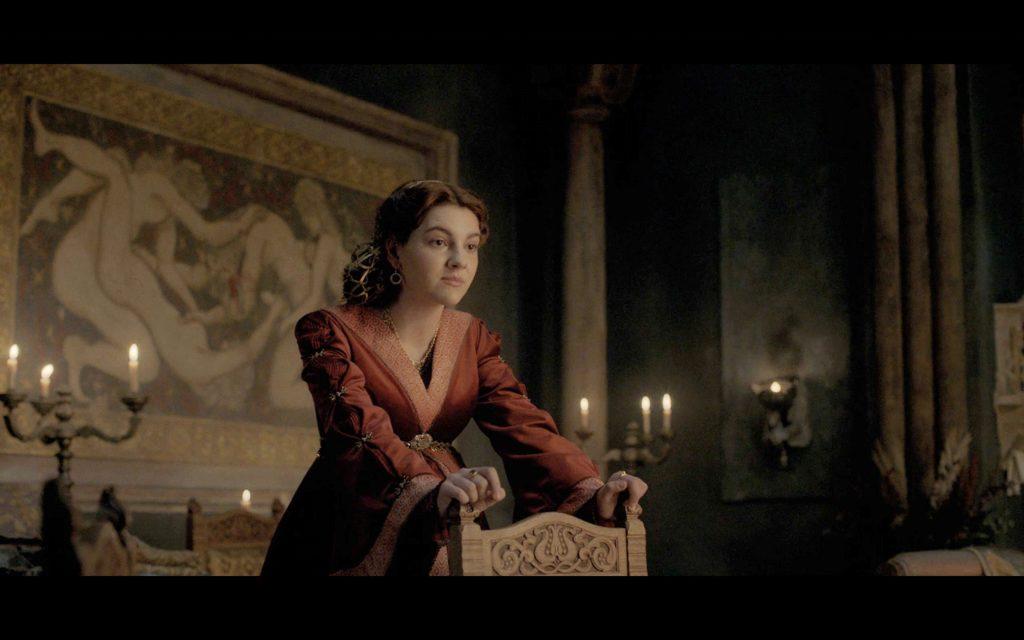 “The overall feel was to be ‘medieval,’” Harris told Artnet News. “But as there is no medieval painting with this subject matter, that was really just a guide in how to treat the figures as motifs and have them floating in space.”

Instead, to source ideas, the artist looked to ancient Greek and Roman artifacts, especially the art unearthed from Pompeii, which included a cache of frescos and sculptures so saucy, it was hidden from public view for over a century.

“The Greek ceramics were particularly useful in the simplicity that the figures are depicted and their frieze-like quality,” Harris said. “Combining aspects of these with references for early Northern European medieval frescoes and manuscripts helped to develop a style that the [production] designer was happy with and felt believable for the setting.”

They’re also references that would sate any GoT buff. George R.R. Martin, who authored (and is still authoring) the collection of novels on which the television series is based, has been upfront about the Greek and Roman influences in his work. The books’ ice-made Wall, for one, was inspired by Hadrian’s Wall, while the polytheistic religion and sybaritic culture of the fallen city of Old Valyria, from which Targaryens originate, take cues from ancient Carthage and the Greek pantheon. (Jim Clay, HotD’s production designer, likewise looked to “Roman and Byzantine times” as he designed the Red Keep.)

“It was less about the lurid nature of the imagery and more about showing that the Targaryens hold to different customs,” showrunner Ryan Condal told Westeros of HotD’s interior decorating choices. “These aren’t really Targaryen murals, but Valyrian murals, with the idea that when the Red Keep was built, that was something from the Valyrian texts that they brought.” 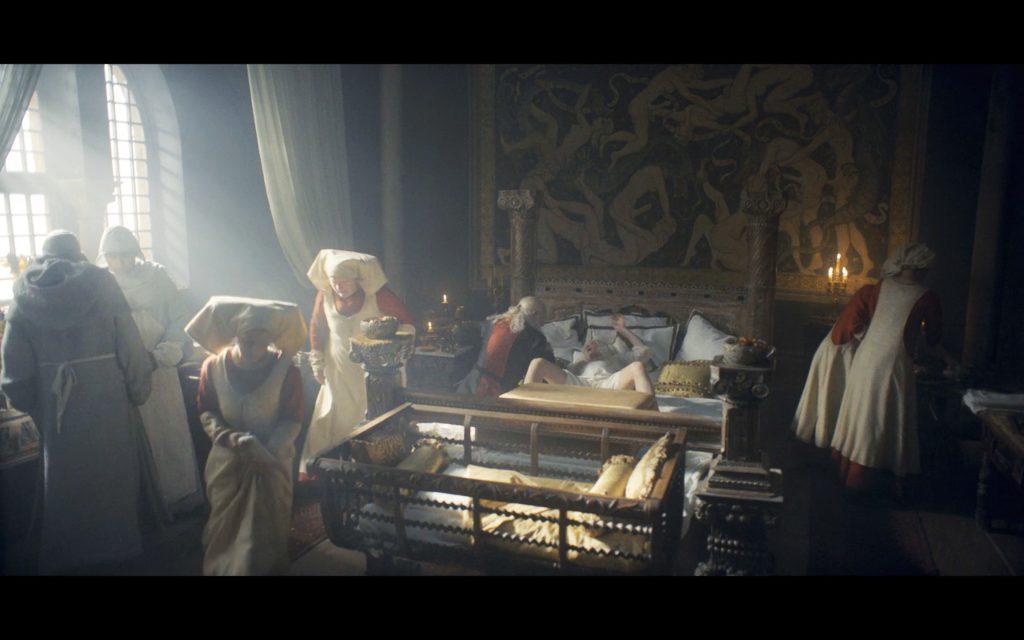 Harris painted these murals on primed and prepped plaster spread panels, with the figures sketched out in chalk, before being refined with a brush using water-based emulsion paints. Each panel was framed with a medieval-era decorative border, first stenciled in then embellished by hand. The paintings were then sealed, aged, and installed on the set.

It was an assignment that called on Harris’s two-decade-plus career in the scenic arts, during which the London-based artist has produced such work as the richly tapestried backdrops in The Favorite, the wood paneling of an 11th-century church set for 2015’s Macbeth, and a recreation of Vermeer’s Girl with a Pearl Earring for the 2008 film of the same name. Painting to match a particular period, as well as production design specifications, might be challenging, he said, but “rewarding when achieved.”

“I am always in such awe of art and the wonderful things that have been created through the ages across the world,” he said. “Just trying to capture some sense of that for what is a quickly executed approximation of a real thing is what I aim to try and do with every job I take on.”

Arriving on the back of that resume, the HotD job remains, for Harris, “quite unusual” in its ask. The NSFW results have caused equal excitement and confusion among eagle-eyed viewers, and understandably were blanked out in official stills of the show. But they’ve also served thematic and plot purposes: in later episodes of the season, the panels were unceremoniously removed, reflecting King Viserys Targaryen’s fading authority in his own court.

On set, Harris remembered “a lot of comments, laughter, and occasionally shock about what I was doing,” considering the subject matter. But as he pointed out, Targaryen erotica picked him, not the other way around. “I often need to make it clear that I just paint what I’m asked to fill the brief,” he added. “I don’t choose what that is.”