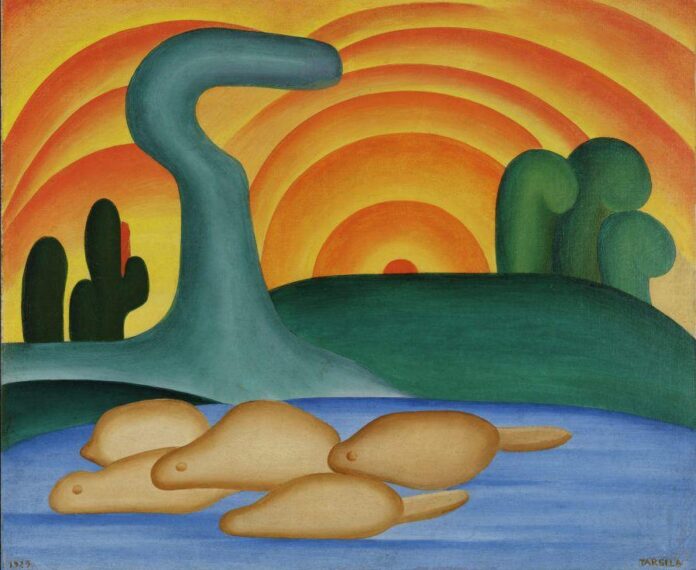 A stolen painting by the Brazilian Modernist artist Tarsila do Amaral, one of the most influential figures of Latin American art, was recovered underneath the bed of the suspected criminal Gabriel Nicolau Traslaviña Hafliger, whose home in Rio de Janeiro was raided by police this week. Hafliger was one of three individuals allegedly involved in a scheme to extort funds and steal art from an elderly woman whose daughter hired them to pretend to be Candomblé spiritual workers.

One of the works recovered, Do Amaral’s Sol Poente (1929), was painted at the height of the artist’s career and is valued at 250m reais ($50m). It was included in the Museum of Modern Art’s retrospective of the artist in 2018. Two other paintings by the artist—titled O Sono (1928) and Pont Neuf (1923)—were also seized by police.

A video posted on social media shows detectives pulling the paintings out from beneath a slatted bed frame. Two of the stolen works had allegedly been sold to the Museum of Latin American Art in Buenos Aires, Argentina.

Hafliger’s mother, who resided in the home, was also arrested during the raid for her role in the scheme; she had approached the victim and introduced herself as Mother Valéria of Oxossi, or a Candomblé priestess.

The victim, Geneviève Rose Marie Coll Boghici, is the widow of the famed dealer Jean Boghici. She was allegedly attacked, deprived of food and threatened with a knife when she discovered that the scheme had been orchestrated by her daughter, Sabine Boghici, who had attempted to sell some of the works to a São Paulo-based gallery.

The victim’s daughter and the three suspects have been arrested for embezzlement, extortion, false imprisonment and criminal association, and arrest warrants have been issued for two other individuals. Several pieces of jewelry including three Rolex watches valued at around 6m reais ($1.2m) were also stolen, in addition to cash.