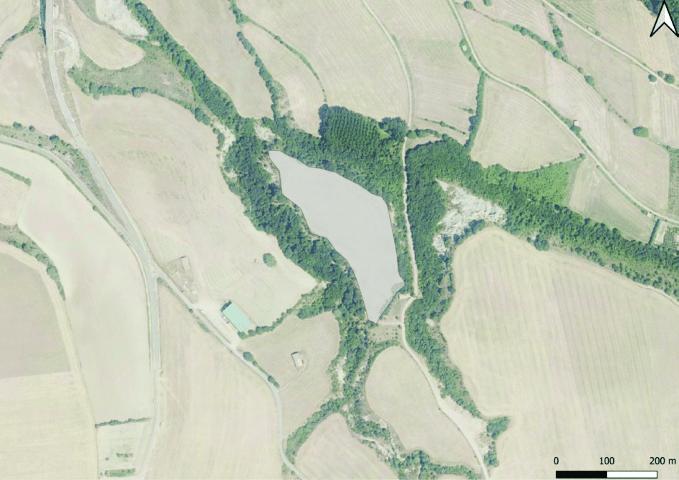 Archaeologists at the University of Zaragoza in Spain have unearthed an entire Roman city that was previously unknown. Until they discover its historical name, they’re calling the site El Forau de la Tuta.

The flat, agricultural area in question lies less than a mile northwest of Artieda, a small town in Aragón, and near an ancient road that linked Jaca, Lumbier, and Pamplona during antiquity through the Middle Ages.

Until now, researchers thought this 10-acre expanse was home to several separate archaeological sites, including the Hermitage of San Pedro and Rein. El Forau de la Tuta is the name for everything now, since the team realized they’re all one interconnected city.

Research remains ongoing, but 13 experts from the university recently released a report on the project’s findings so far. According to an English translation, their involvement started in 2018, when Artieda’s city council contacted the University of Zaragoza out of concern for the “deterioration and neglect” of the existing ruins.

In early 2021, after two years of planning, researchers opted to focus on the area formerly known as the Hermitage of San Pedro. They spent July and August that year conducting field work, “which combined intensive surface prospecting, clearing, and cleaning of opus caementicium elements of the western slope and the delimitation of four stratigraphic surveys.”

Only two of those surveys have been conducted so far. Their findings’ importance demanded the researchers take their time.

Pairing remote sensing techniques like georadar and aerial images with traditional methods, the researchers located two streets, the whispers of sidewalks, four rudimentary cement sewer outlets, one life-sized marble hand of a presumed public monument, and even the reception room of a thermal bath—replete with mosaics preserved by the collapsed sandstone ceiling.

That stunning discovery, adorned with motifs of shells and scallops, centers around two cupids riding on the backs of seahorses.

These remnants of urban planning belie an ancient imperial Roman city that existed from the first through the fifth century. It was home to “buildings of monumental proportions,” as well as stone sculpture elements, including two Corinthian capitals and three Italic Attic bases, which lend further weight to the report’s singular city theory.

Researchers also learned that this site has lived multiple lives. A medieval peasant village sat atop the Roman ruins from the ninth to 13th centuries. This one had at least four possible names: Artede, Arteda, Artieda, or Arteda Ciuitate. Circular silos and an extensive necropolis mark new findings from this era in the site’s legacy.

Researchers are still examining two new tombstones uncovered at the necropolis. The team will also continue studying the area’s hydraulic complex, which resembles water supply systems in nearby Basque cities like Andelo and Los Bañales. They’ve made significant headway on the disembodied hand, too, but María Pilar Lapuente Mercadal, an expert from the university’s department of earth sciences is still on the case.

While the unknown Roman city might steal the headlines, the report notes that a full look at El Forau de la Tuta “will also allow progress in the study of the past of this region in the High Middle Ages, a period particularly poorly known.” Stay tuned.