Home News Ringleader of group who attempted to steal Banksy mural in Ukraine could... 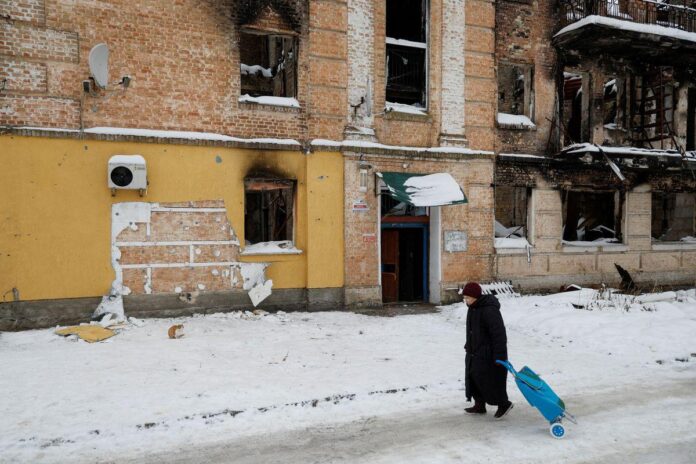 The ringleader of a group who attempted to steal one of seven works created by the street artist Banksy on buildings across war-torn Ukraine last year faces up to 12 years in prison.

Ukrainian police said in a statement on 2 January that the investigation of suspects detained on 2 December for cutting down a mural of a woman in a gas mask in Hostomel, a Kyiv suburb, determined that the artwork was worth around $2.4m. Hostomel was the site of a battle between Ukraine and invading Russian forces between 25 February and 1 April, which ended with Russia’s retreat.

Although police did not name the suspected ringleader, providing only a photo with his face blanked out, it is likely that he is Serhiy Dovhyi, a Kyiv-based mathematics graduate and environmental activist. Dovhyi identified himself as the organiser of the attempted theft to the The New York Times last month. More recently, he told Ukrainian news site Graty in a story published on 2 January that he had planned to auction Banksy’s work to buy approximately 40 vehicles for the Ukrainian military.

“I would write to Sotheby’s,” he told Graty, because of their experience in selling works by Banksy. “If they said: ‘Who are you?’, then I would write to some smaller auction [house].”

Dovhyi, who says he was saving the work from demolition of the building, also explained to Graty why he brought cameramen along to film the dismantling of the mural on 2 December. “I thought in the film to apologise to Banksy. To say that if it were not for the war, I would not do this,” he said. “Any person who understands street art will say that the dismantling of graffiti is also an art event,” he added.

According to Graty, one day before Dovhyi came to cut down the mural, the Hostomel village council had registered it as a monument. Graty also describes efforts to preserve Banksy’s other Ukraine murals, and record locals’ interactions with the anonymous artist.

The suspected crime is, according to Ukrainian police, “theft committed on an especially large scale or by an organised group punishable by imprisonment for a term of 7 to 12 years with confiscation of property”, part five of article 185 of Ukraine’s criminal code.

Maya Ruiz-Picasso, the Eldest Daughter of Picasso and Keeper of His Legacy, Has Died at Age 87

Joshua Tree‘s Invisible House, a Mirrored Marvel of Desert Architecture, Has Hit the Market for a Sizzling Sum