Home News Roy Lichtenstein’s Art Has the Most Pop in the Private Market. With... 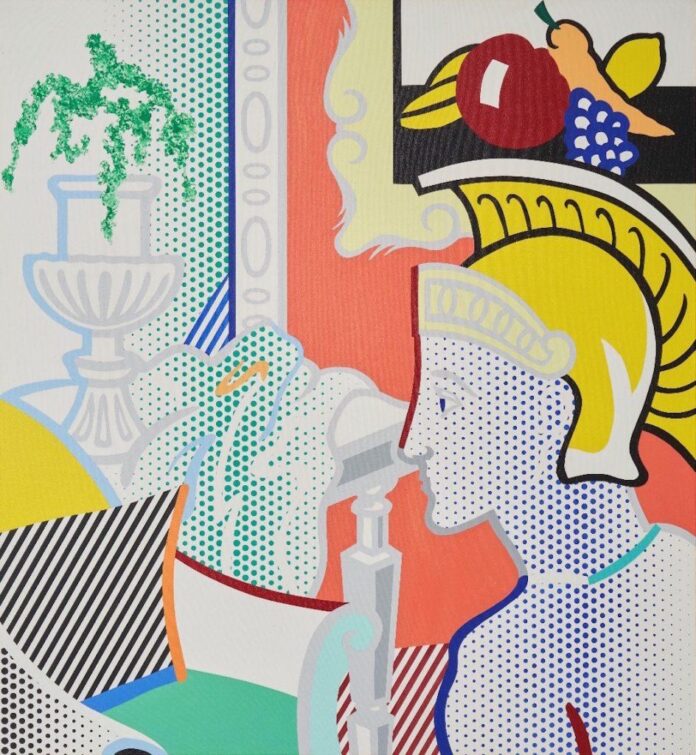 Phillips is shining a spotlight on Pop art star Roy Lichtenstein this summer—and providing a jolt of energy into what is typically very quiet stretch of the art-world calendar—with a special sale (through September 6) that features two works once destined for the home of Gianni Versace.

The late fashion designer commissioned the Greco-Roman-inspired works now on offer at Phillips to decorate the studio of his Milan home the same year he was notoriously murdered. They are priced around $4 million to $5 million, a representative confirmed.

and “encapsulate many of Lichtenstein’s most important themes, including the female nude, still life, interiors, and architectural motifs,” Robert Manley, worldwide co-head of the department for 20th century and contemporary art at Phillips, told Artnet News. 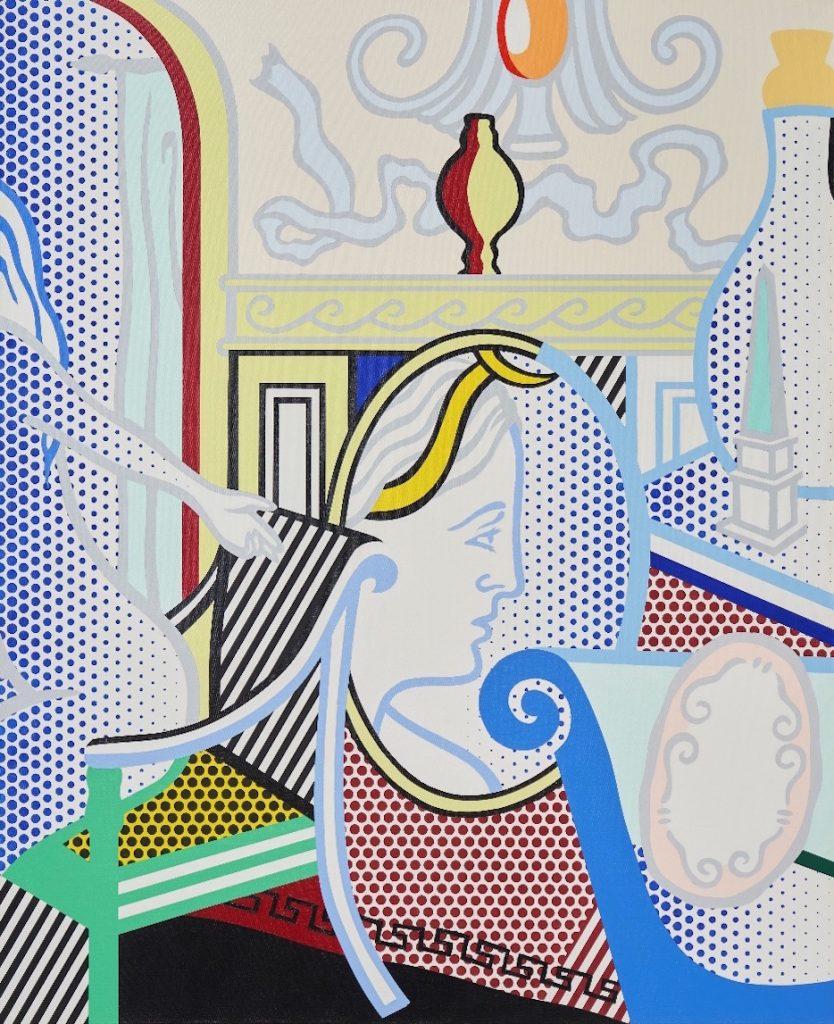 Six months passed after Versace’s death before his sister, Donatella Versace, was contacted by the artist’s studio and made aware of the paintings’ existence. She promptly had them displayed in the Versace New York townhouse.

Alongside these two unique pieces, Phillips is presenting several other works by the artist including (1964) and (1965). All will be on view at Phillips Southampton (though the accompanying works are not for sale) in a presentation organized by the auction house’s private-sales arm.

Fittingly, Southampton was where Lichtenstein and his second wife Dorothy bought property in 1970, and the home and studio they built there eventually became their primary residence. 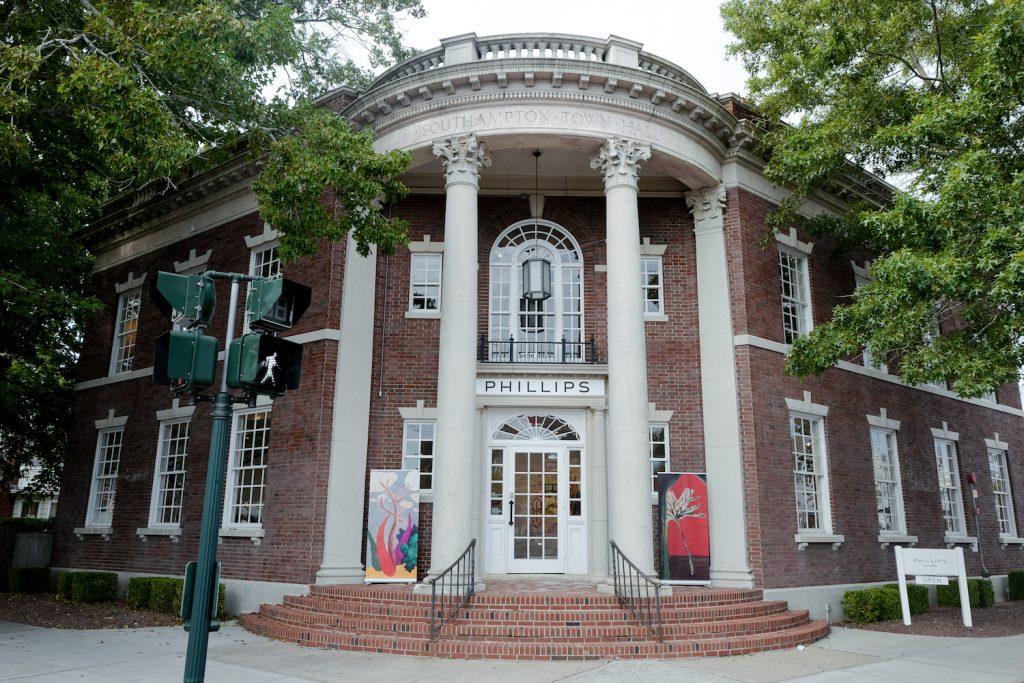 On the occasion of this summertime show, we peered into the Artnet Price Database to get a better understanding of the artist’s market. 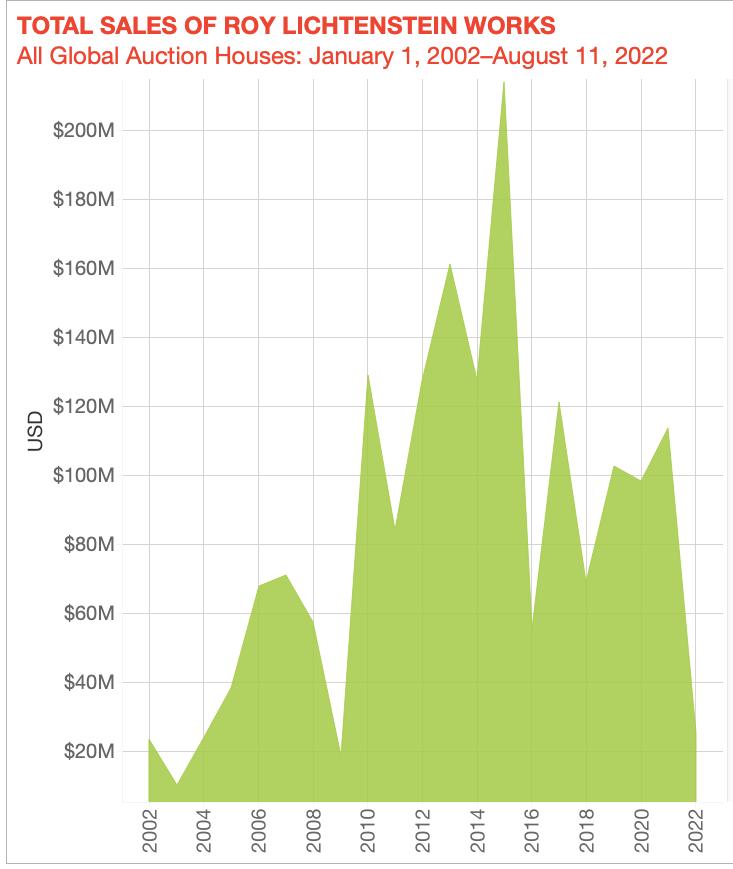 1. Private market pop. Publicly, the market for work by Lichtenstein peaked in 2015, when (1964) fetched $95.4 million. Privately, works by the artist have sold for considerably more since. Five years ago, Agnes Gund sold (1962), one of Lichtenstein’s greatest, ahem, masterpieces, for a whopping $165 million to Steve Cohen. (She used $100 million of the proceeds to create the Art for Justice fund.)

2. ’60s girls. Lichtenstein’s most prized works date from 1962 to 1964—specifically, the artist’s depictions of women in an aesthetic derived from advertising and comic books. and his auction record-setting both fall into this category, and employ the artist’s famous Ben-Day dot motif.

3. Late-work revival. It is a testament to the enduring appeal of the artist’s nudes and Ben-Day dots that a later ’90s version revisiting these themes, (1994), fetched $46 million in the depths of lockdown in 2020. Consigned, sources say, by former UFC CEO Lorenzo Ferttita, it became the third-priciest work by the artist ever sold at auction. Other late bodies of work that could be in for a reappraisal include “The Interiors,” such as the ones created for Versace, and “Chinese Landscapes,” which depict imagery inspired by Song Dynasty scrolls through drifting fields of dots.

4. Affordable price points. Lichtenstein’s Pop art paintings get most of the attention, but he was also a prolific sculptor and printmaker. The artist employed a host of industrial or “non-art” materials and designed mass-produced, editioned objects, such as a shopping bag for a 1964 show entitled “American Supermarket” at Paul Bianchini Gallery. Lichtenstein produced print editions in a large variety of sizes, but 40, 48, 60, and 200 were particularly common runs. The high volume of transactions and variety of price points has brought the artist’s average auction result under $300,000 over the past decade.

5. Consistent interest. Lichtenstein remains one of the most consistently searched artists in the Artnet Price Database. So far this year, he has generated 12,308 paid searches.

5. Buying opportunities. Historically, demand of Lichtenstein has stayed fairly inside the lines, but market-watchers say there is room to grow in his more abstract, conceptual bodies of work, including his proto-Pop works from the late 1950s, ceramic and painted metal sculptures from the 1960s, his “Stretcher Bars” series, and his architecturally focused “Entablature” series.

Lichtenstein garnered significant acclaim in his lifetime, both critically and in the market. By the late 1960s, he had already been the focus of several museum surveys, including those at the Stedelijk Musem in Amsterdam and the Solomon R. Guggenheim Museum in New York. Sure, he had his detractors: staunch critics accused Lichtenstein of plagiarizing specific comic strips, and some remain convinced he has been unfairly venerated still today. But the artist kept creating and experimenting right up until his death in 1997, when he became ill with pneumonia and died unexpectedly at age 73.

There is little doubt that Lichtenstein’s place in the canon is firmly established. “His market is solid, with eight of his top 10 prices having been set in the last 10 years and I don’t see that strength slowing down anytime soon,” Manley said. To be sure, the top of the market may become thin in times of lackluster supply, and the artist’s work is unlikely to surpass the nosebleed-level heights it has reached on the private market. But as a solid store of value, it’s proven its mettle.