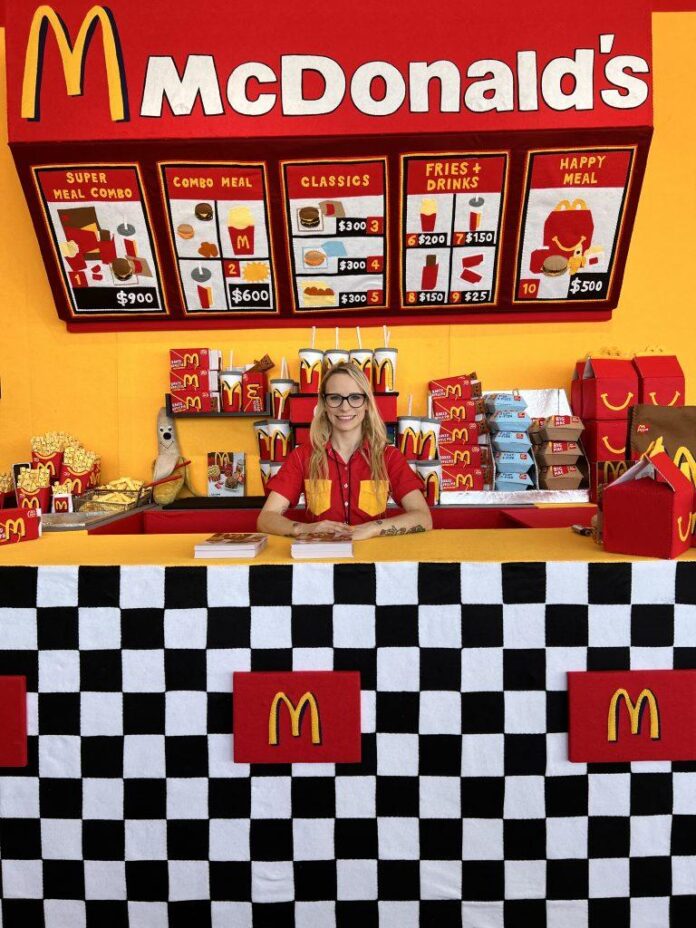 Lucy Sparrow is ready to take your order. The British artist, beloved for her hand-sewn and painted sculptures, is back in Miami Beach with an installation of a fully stocked McDonald’s restaurant, serving up adorable artworks in the shape of smiling burgers, fries, and apple pies.

This cute and cuddly version of the popular burger-slinging restaurant, which currently has 13,438 U.S. franchises, can be found at the Scope Art Show in Miami Beach. (Sparrow has staged similarly delightful installations such as the Los Angeles supermarket , and the upscale grocer at New York’s Rockefeller Center, among other projects.)

“This is based on my first memory of McDonald’s. My mom took me after we went to see the movie when I was six,” Sparrow told Artnet News. “I’m a bit of a mega fan.”

Determined to recreate that core memory, Sparrow found photographs online of the chain’s old-school faux wood floor tiling, and printed it out on a carpet for the floor of her booth. She also hand-dyed a McDonald’s uniform for herself in the fast food giant’s signature red and yellow, and recreated fabric versions of the posters on the walls promoting the various foods for sale. 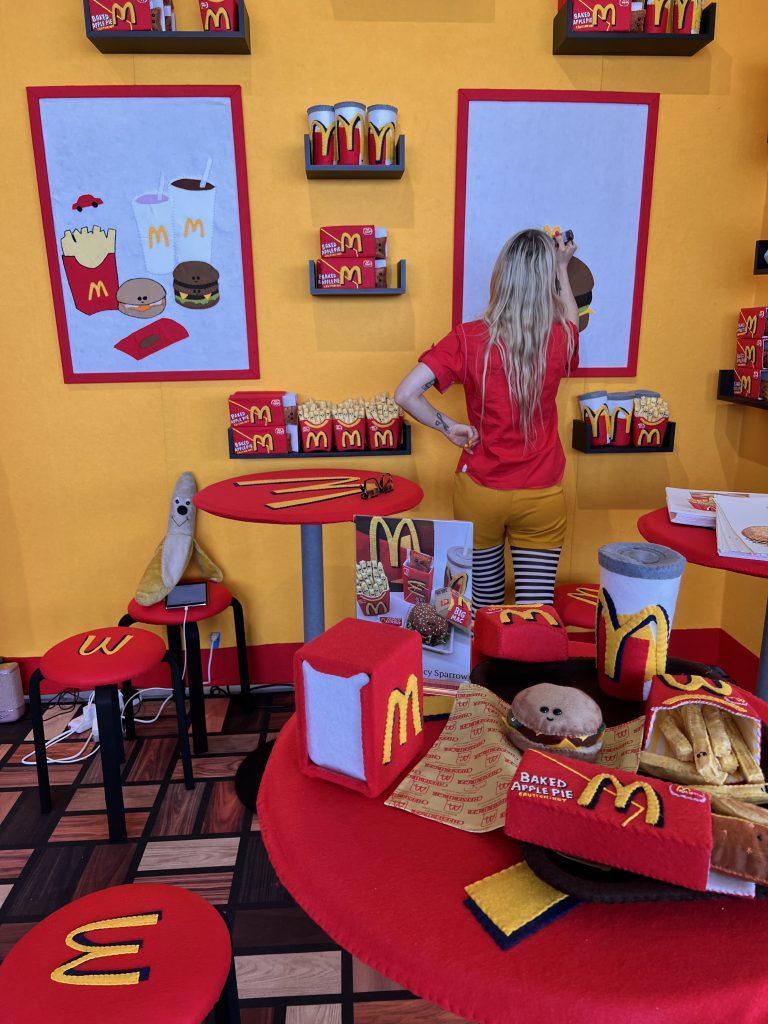 Other details include a fryer overflowing with crispy fries—Sparrow, impressively, has trained herself not to call them chips in front of the U.S. audience—a soda machine, and fabric-covered stools and tables emblazoned with McDonald’s famous Golden Arches. In an especially nice touch, she even turned the price list for her pieces into a work of art in the form of an overhead menu board.

The artist is also there to interact with fans, posing for photos and revealing her go-to McDonald’s order: “Filet o’ Fish combo and an apple pie—that’s if I’m feeling really naughty.” (The felted fish sandwich, featuring fuzzy orange terrycloth for the crispy fried patty, is also especially cute.) 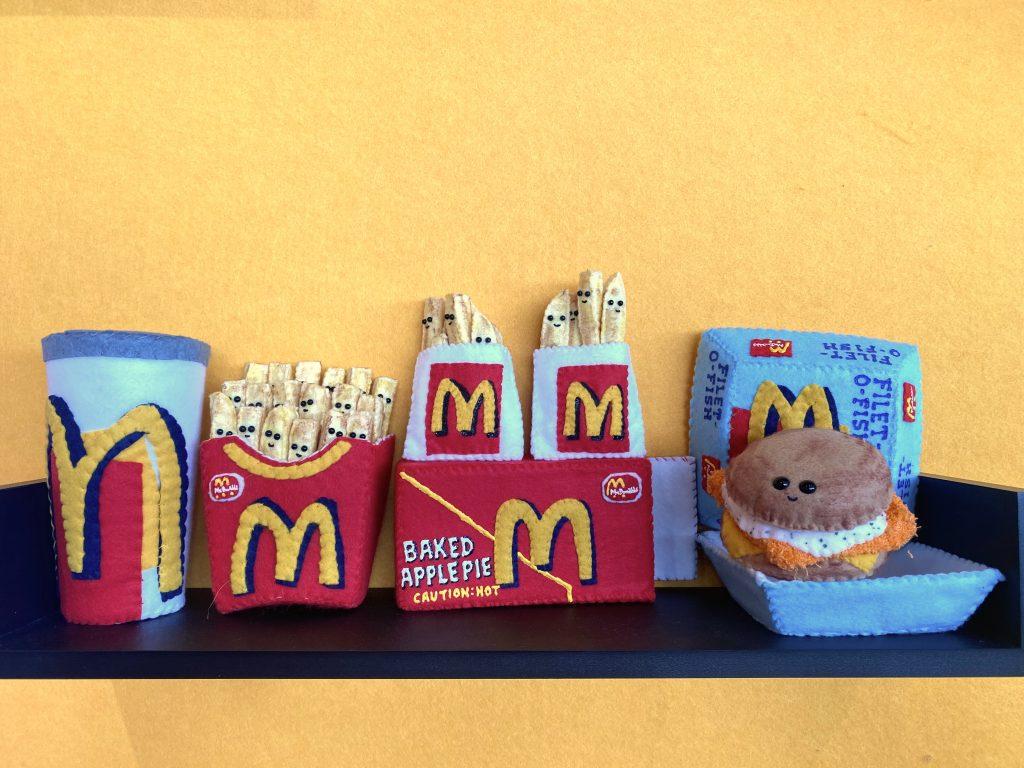 Scope invited Sparrow to create a special project for this year’s fair; she previously created her first stateside installation, , for its 2016 edition. That time around, Sparrow had hoped to sell the entire installation in one fell swoop, for a hefty £30,000 ($37,500). This year, you can order à la carte.

Prices range from $25 for a pair of ketchup packets to $200 for an order of fries. There are combo deals for $600 and $900, as well as a $500 Happy Meal that comes with a furry banana—which is something of Sparrow’s personal mascot—as the toy.

“The Happy Meal was so fun to make,” Sparrow said, noting that making all the fast food packaging created an extra layer of work. 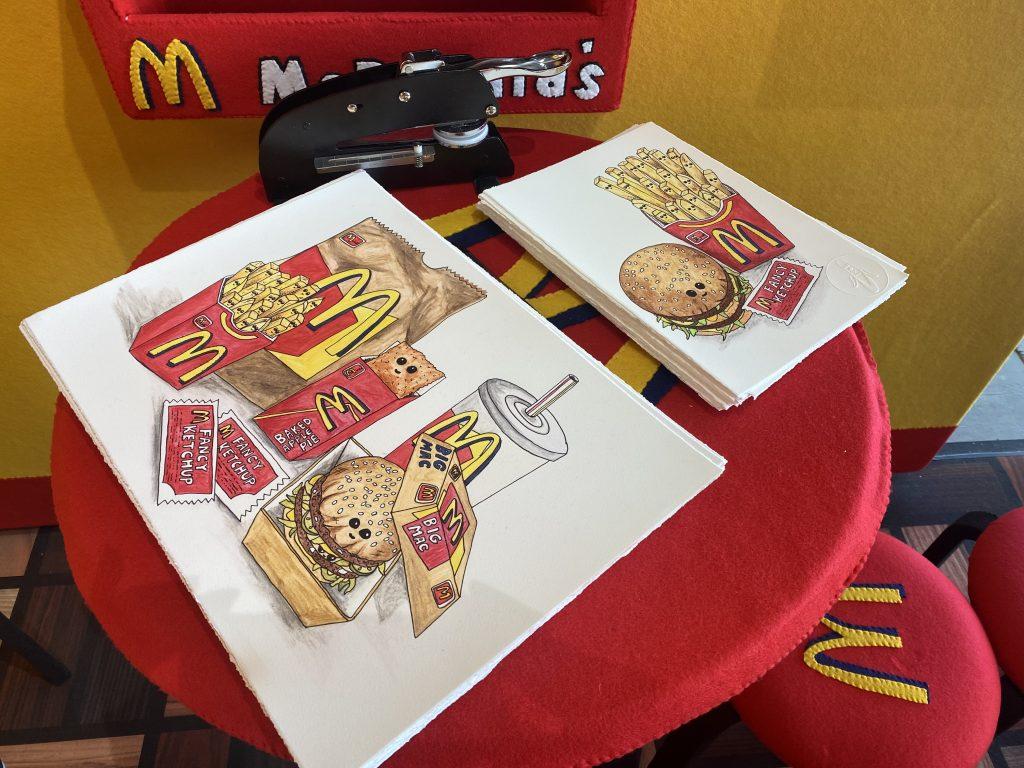 Lucy Sparrow’s and prints are priced at $100 and $60 at her Scope Miami Beach McDonald’s installation. Photo by Sarah Cascone.

She’s also created her first-ever prints for the occasion—two signed digital prints in editions of 500, for sale for $60 and $100.

On the fair’s opening day, it is safe to say that the crowds were “Lovin’ It” as Sparrow sold 60 cartons of fries and 30 Big Macs. That was the entirety of her initial supply of the latter, which meant she spent last night finishing 20 more.

“I’m quite fast—but some of them were part-made,” Sparrow said. 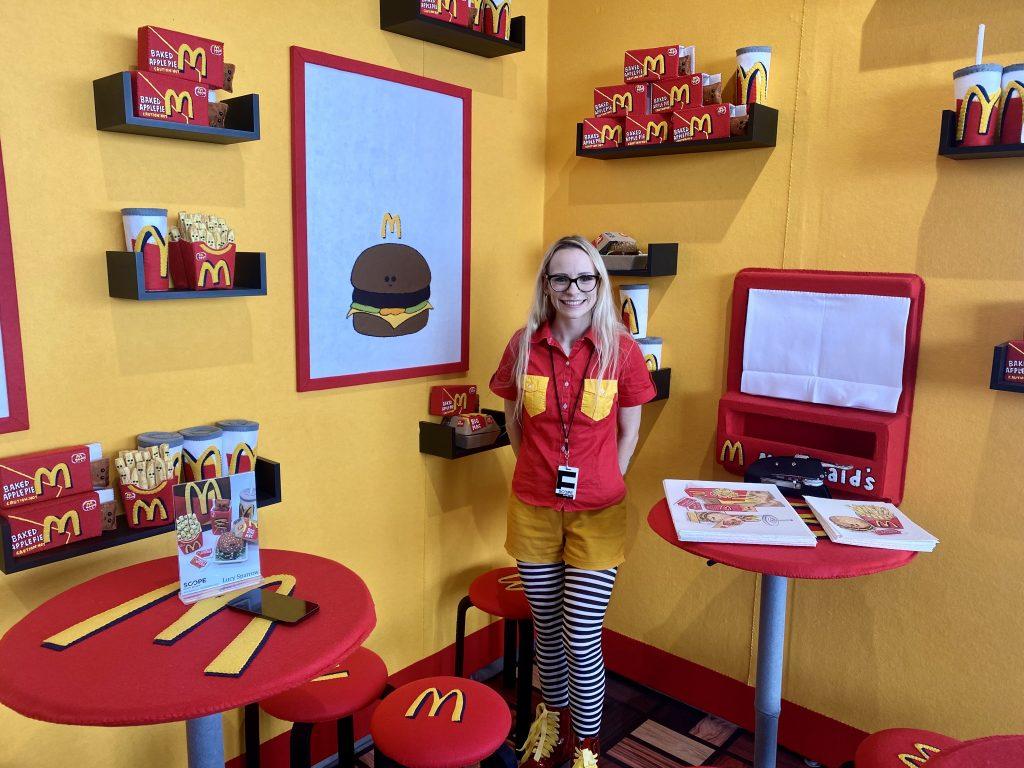 A few visitors did express an anti-McDonald’s sentiment to the artist, who acknowledges that giant corporations can have a downside.

“But my work is not about that,” Sparrow said. “It’s about a celebration of memory and childhood. It’s about nostalgia.” 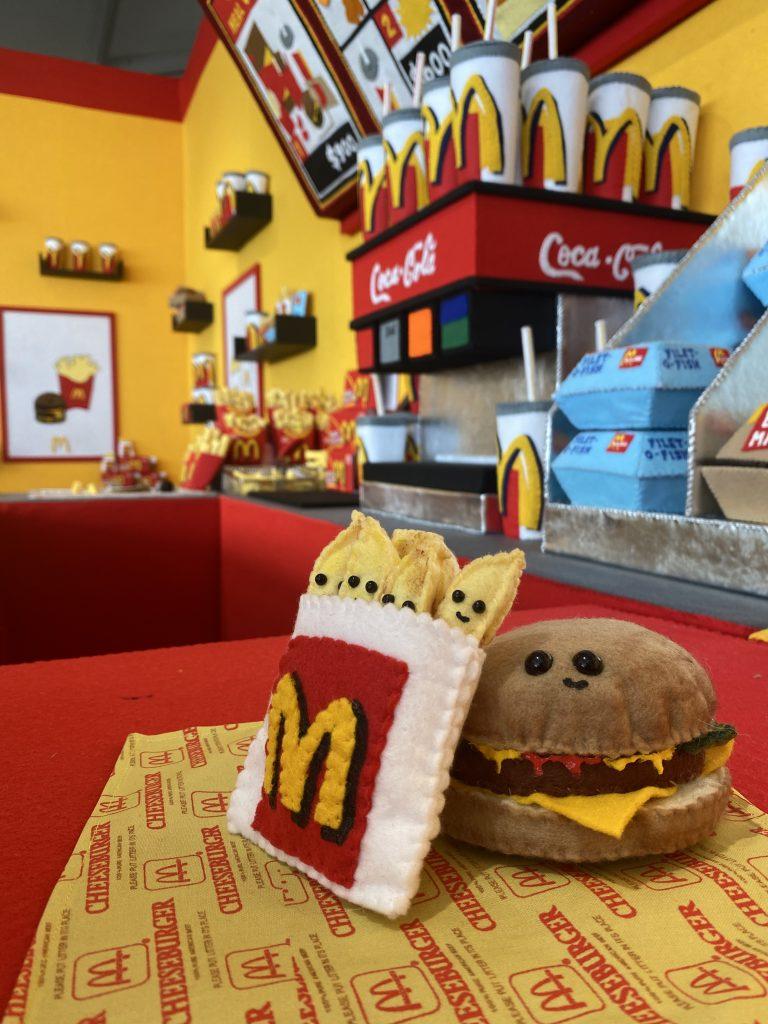 The Miami Beach project means that the artist is bookending her year with projects in Florida. In January, Sparrow opened , her largest and most ambitious project to date, courtesy of the Vinik Family Foundation and Art Production Fund.

Open for a month, it featured some 50,000 felt creations, with a focus on local produce and Cuban culture, including cigars. Sparrow estimates that she sold 35,000 to 40,000 objects in Tampa. (Over the years, she’s become better at meeting the seemingly insatiable demand for her work; in 2017, her New York City debut show, , had to close nine days early when her stock ran out.) 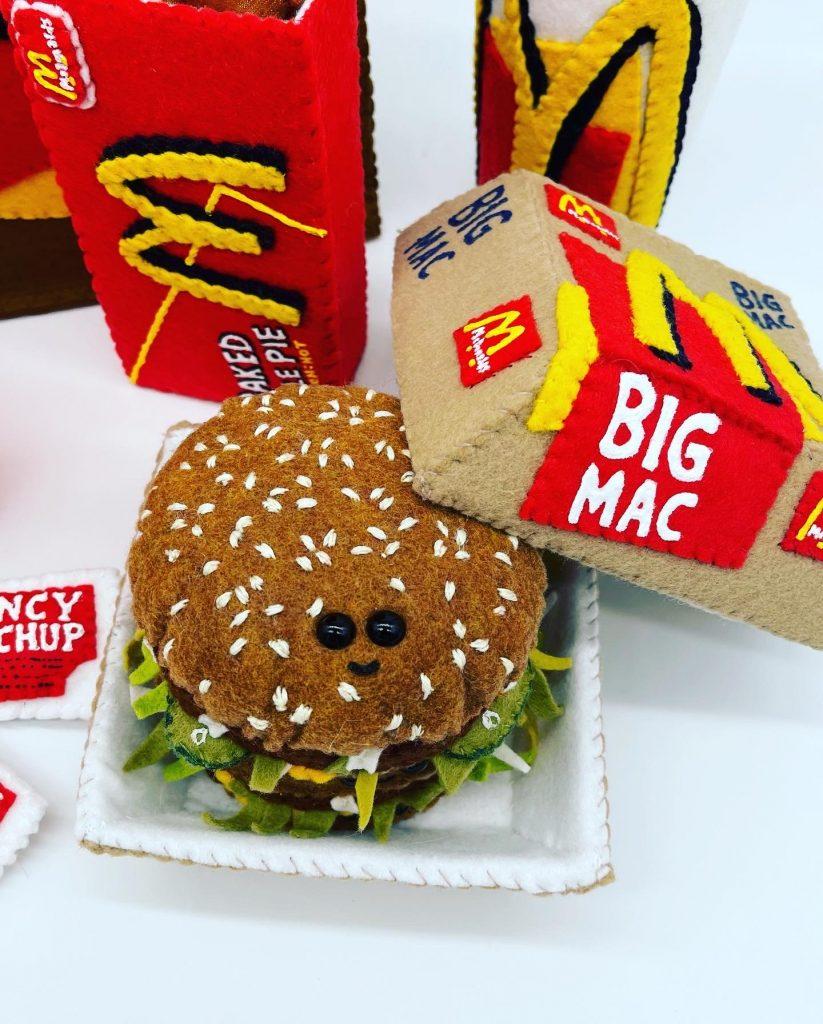 “It was mental,” Sparrow said. “We had queues around the block the whole time.”