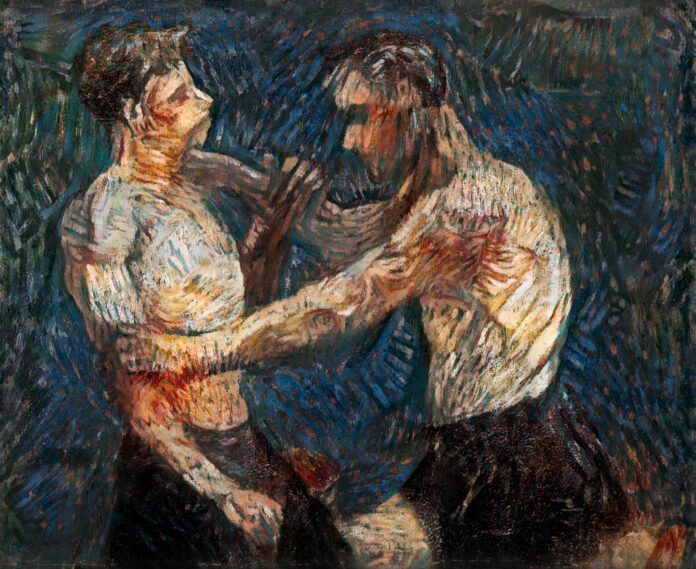 An underpainting of two male wrestlers discovered via X-ray beneath a still life by Vincent Van Gogh has been reconstructed into a work in its own right by artificial intelligence.

The picture, which is being exhibited by MORF Gallery at the Focus Art Fair in the Louvre (through September 4), was carried out by Oxia Palus, an initiative run by physicist George Cann and neuroscientist Anthony Bourached, both PhD students at University College London, alongside the artist Jesper Eriksson.

The image, which shows the two topless figures in close combat, was first discovered a decade ago. It was painted over with Still life with meadow flowers and roses (1886), now at at the Kröller-Müller Museum in the Netherlands.

A reference to the lost work exists in a letter by Van Gogh to his brother Theo from January 1886, which reads: “This week I painted a large thing with two nude torsos—two wrestlers […] and I really liked doing that.”

Though the reconstruction of its color and style is an estimation made by the A.I., Bourached said it was “very convincing—by far the best guess we can get with current technology.”

To get A.I. to reproduce the style of an Old Master, the team trained a neural network on other examples of the artist’s work, teaching it to accurately reconstruct the picture from an X-ray-style image. 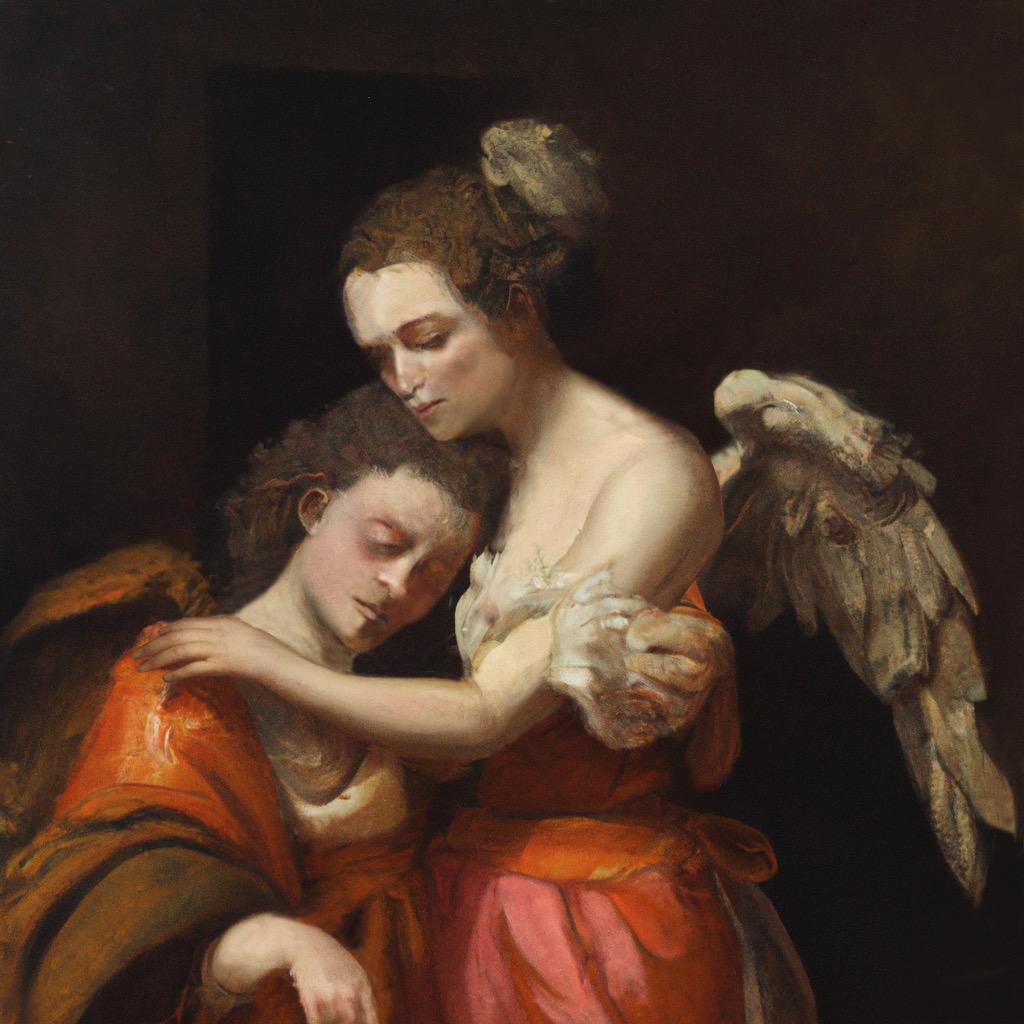 Two Wrestlers is one of several works that have been resurrected by Oxia Palus. Known as the NeoMasters, the collection includes a standing female nude hidden behind another of Van Gogh’s paintings, a portrait of Modgliani’s ex-lover Beatrice Hastings behind the Italian artist’s Portrait of a Girl (1917), and The Lonesome Crouching Nude from behind Picasso’s The Blind Man’s Meal (1903).

A landscape painting of the Parc del Laberint d’Horta in Barcelona by Santiago Rusiñol was also recreated after disappearing behind Picasso’s The Crouching Beggar.

This August, Oxia Palus also initiated TextMasters, a new series that uses the A.I. text-to-image generator DALL-E 2 to reconstruct lost masterpieces known to us only by text descriptions.

Delving into the process behind recreating Cupid and Psyche, Eriksson told Artnet News it was just a matter of using a simple prompt: “a portrait by Velázquez of a woman called Psyche embracing Cupid in a darkened room.”

“Whilst the prompt is rather simple we’ve found that DALL-E, like many text models, often responds well to certain key phrases rather than lengthy descriptions,” he said. “For instance, ‘a woman called Psyche’ seemed to clue the model into the female-male relationship between the two subjects.”

“‘Embracing’ set the detail of that relationship up and also their spatial composition, whilst ‘darkened room’ seemed to provide an accurate scene, which when combined with its training data from other works by Velazquez pulled out a color scheme similar to what we were looking for.”