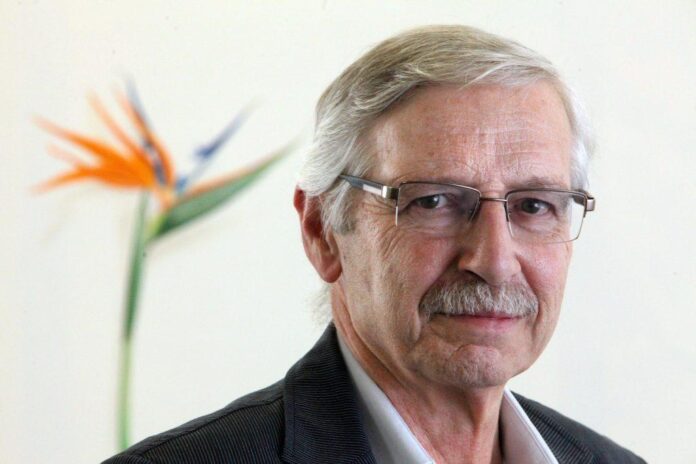 About the Artist: Over his long and prolific career, Santiago Cárdenas (b. 1937) has drawn from a multiplicity of influences, ranging from Old Master still lifes to Minimalist interventions to create his signature, enigmatic still lifes. Born in Bogotá, Colombia, the artist spent his teenage years in the suburbs north of New York City, then studying architecture, paintings, and drawing at the Rhode Island School of Design. Upon graduation, he enrolled in the U.S. Army, where he was able to travel to Europe, seeing firsthand the paintings of the Dutch Golden Age masters, as well as works by Diego Velázquez and Francisco Goya—all of whom would prove majorly influential to his work. Cárdenas uniquely filters these influences through a conceptual framework and imbues his still lives with a flatness of form inspired by Alex Katz, who taught Cárdenas during his MFA at Yale University. Currently, Houston’s Art of the World Gallery is presenting the exhibition “Santiago Cárdenas: Illusionisms,” which features 26 works—including several that are in the collection of the Museum of Modern Art, New York—and offers a captivating overview of the artist’s career.

Why We Like It: Featuring pieces from the 1990s through the 2010s, the exhibition reveals insights into the artist’s subtly evolving practice. Included in the exhibition are a number of Cárdenas’s influential trompe-l’oeil chalkboard paintings from the 1990s. Made on canvas or even cardboard, these paintings convincingly appear as classroom blackboards in various states of erasure and engage the eye in a tangle of illusion that harkens back to Dutch Golden Age games of artistic trickery meant to evoke pleasure in the unexpected. The artist’s more recent still lifes present the centuries-old arrangement of jugs, fruits, and flowers in realistic detail against flattened, abstract backgrounds, creating tension between the composition’s two planes, and are reminiscent of Giorgio Morandi. Cárdenas is regarded as one of the most influential living artists in Latin America today, and this well-curated exhibition offers a smart and engaging introduction to his work for a new audience. 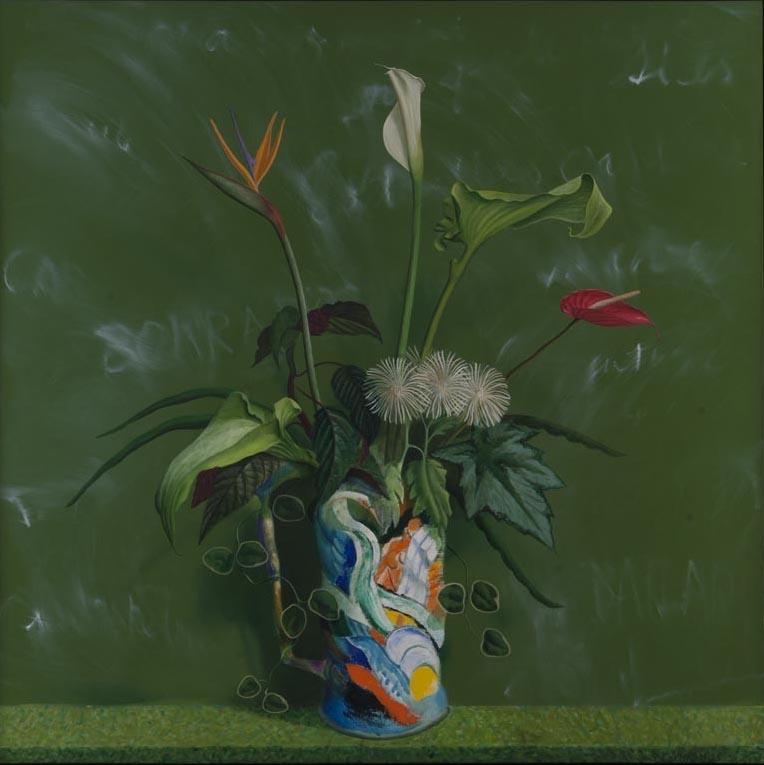 Santiago Cárdenas, (2001). Courtesy of Art of the World Gallery.

According to the Gallery: “From his iconic chalkboards to the fluxioned, colorful abstractions with everyday still-life objects to his masterful use of light and shadows, Cárdenas’s overriding premise consists not of trying to deceive the eye, but of disrupting the viewer’s thoughts and causing a questioning of the sight. The artist’s illusory purpose is to depict objects on the canvas—not necessarily a portal into another world, as in traditional figurative painting. It is not only about his fruitful confluence between the classic and the modern, nor about his unparalleled technical perfection or his obsessive determination to break down color. Instead, Cárdenas unravels light and reinvents objects and figures from a simple evocation and a fleeting reflection to produce a game of illusionism.” 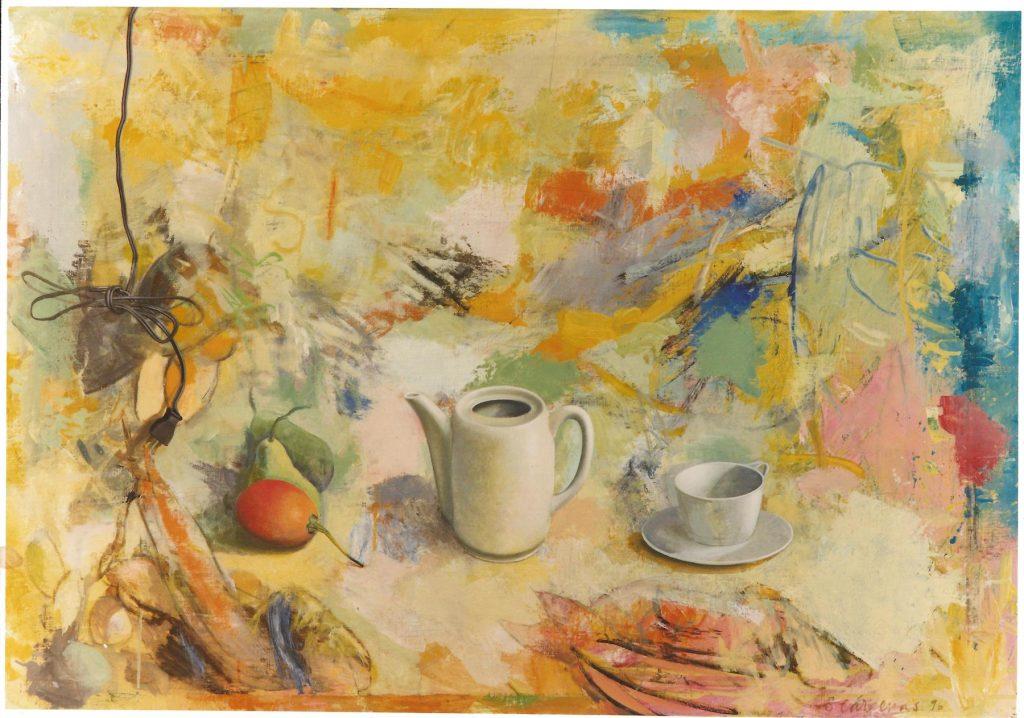 Santiago Cárdenas, (1996). Courtesy of Art of the World Gallery. 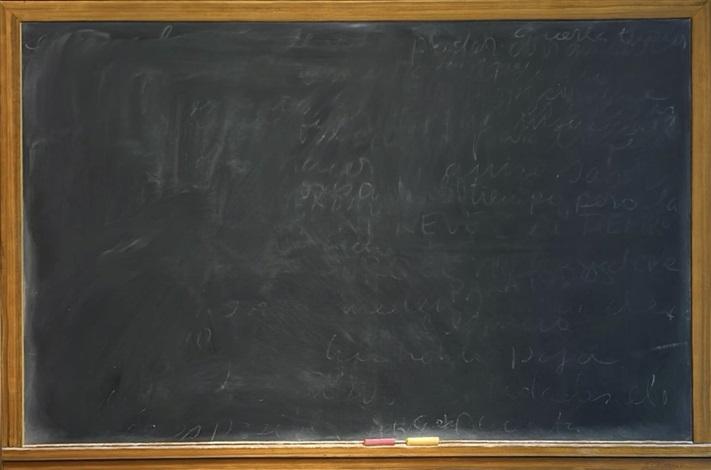 Santiago Cardenas, (2016). Courtesy of Art of the World Gallery. 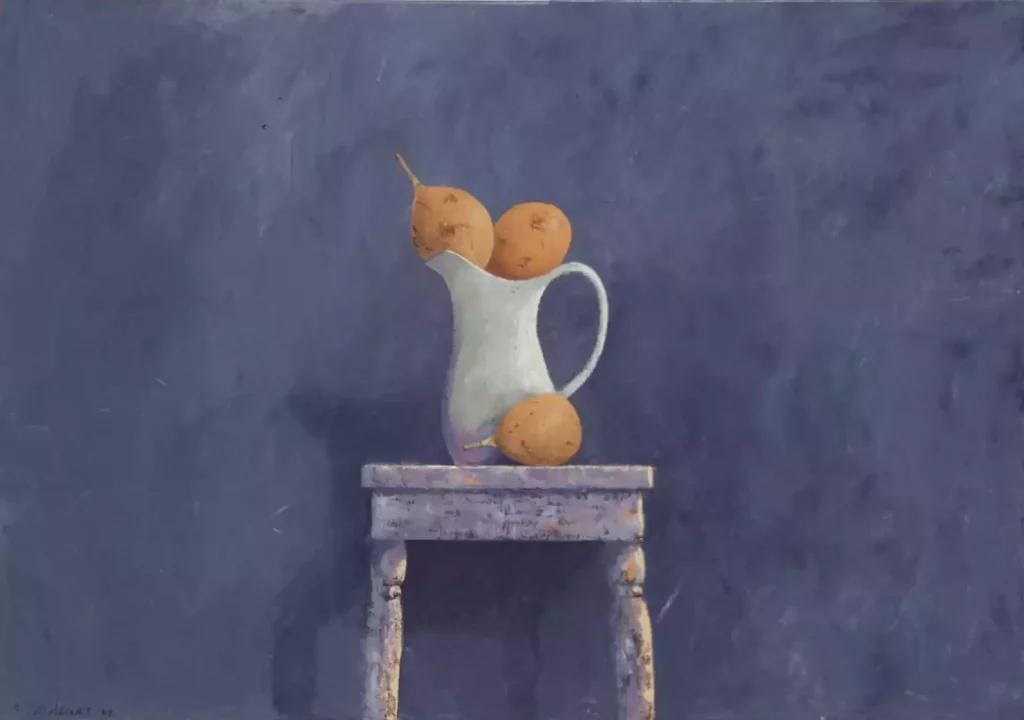 Santiago Cardenas, (2002). Courtesy of the Art of the World Gallery.