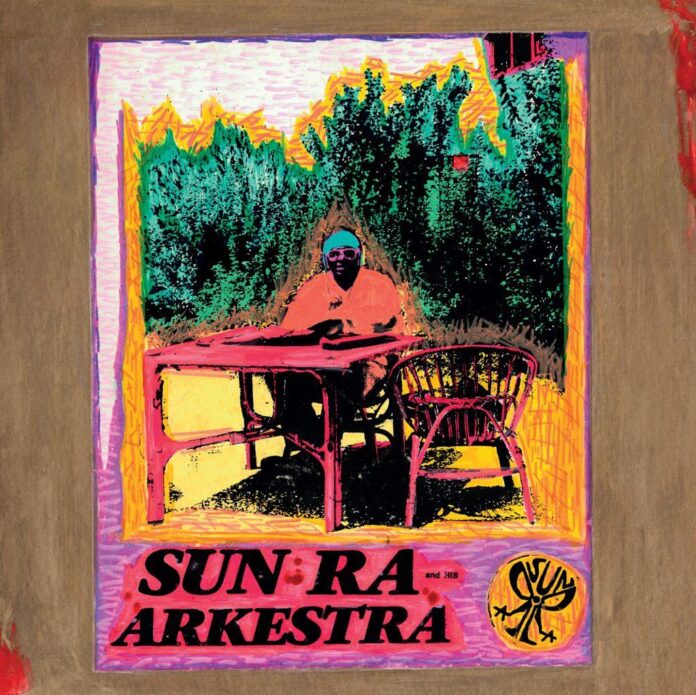 As an artist, Sun Ra was prone to restlessness. Never content with simply being a jazzman, Ra would, from the late 1950s, unleash a stream of records with his group Arkestra that edged the genre into the realm of the avant-garde.

And he didn’t stop there: Ra’s groundbreaking music came packaged in similarly alluring album covers, which psychedelically melded his multitude of preoccupations from ancient Egyptian iconography to emerging sci-fi tropes. They were otherworldly designs, forging a visually distinctive path where there was none before. “These covers,” in the estimation of Irwin Chusid, “belonged between covers.”

It’s why Chusid, the exclusive administrator of Ra’s catalog, has edited and released Sun Ra: Art on Saturn, the first publication to focus on the artist’s cover art. Chiefly, it features the sleeves of the 70 albums that Ra released on his independent record label, Saturn, from 1957 to 1988. They were designed by artists such as Chris Hall and Claude Dangerfield, whose creative processes are documented in the book. 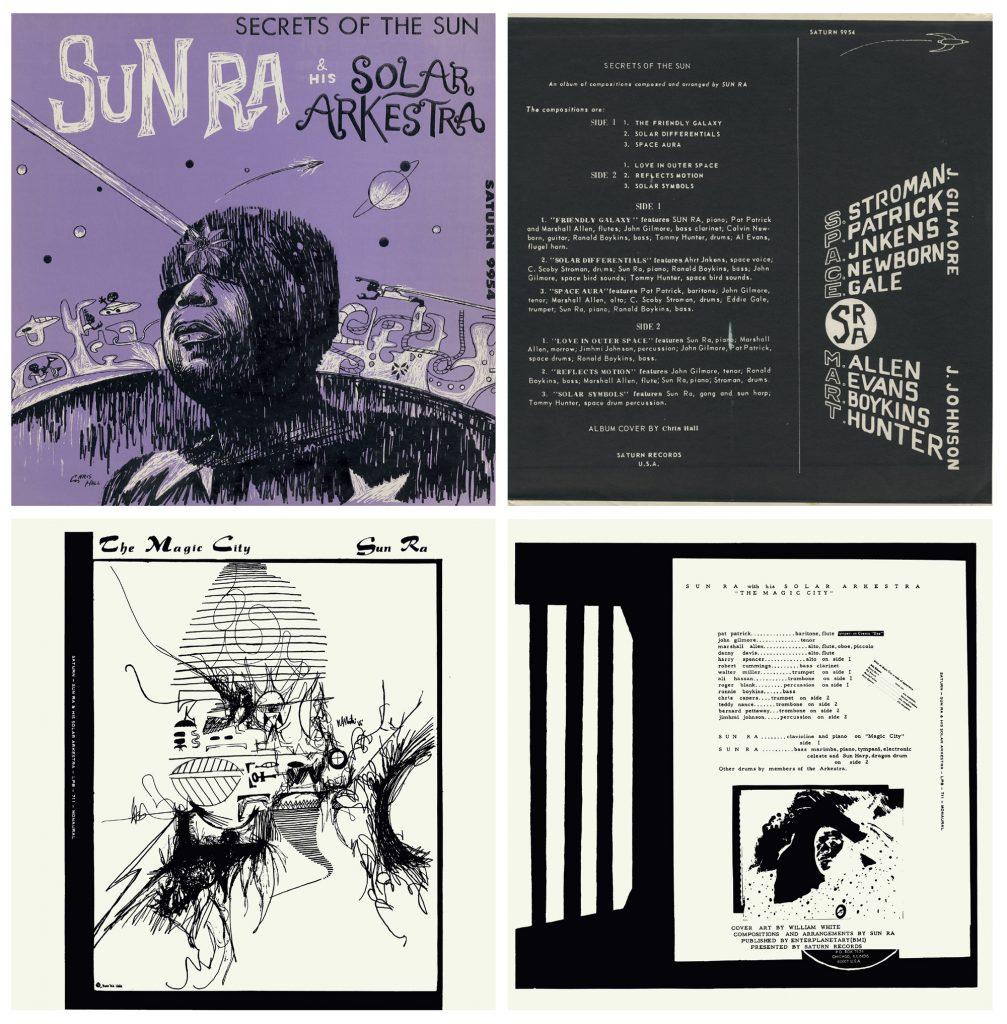 Printed album covers for and , designed by Chris Hall and William White, from . Photo: Courtesy of Fantagraphics.

More compelling, though, the volume compiles the far vaster quantity of record sleeves that were handmade by Ra and his bandmates in the ‘70s.

That decade, Ra had relocated his operations from New York to Philadelphia, where he recognized a need to create merchandise swiftly, though in limited quantities. To do so, he put himself and his Arkestra to work producing album art—manually. A pressing plant would ship blank record platters directly to the band’s Morton Street row house, where Ra’s crew would plug away with photos, stickers, felt-tip pens, paint, and glue, hand-crafting each protective pocket.

This “ongoing arts and crafts project,” in Chusid’s words, would generate unknown numbers of covers, which were then sold at live events and through mail order. They continued to lean into such themes as Egyptian mysticism, space, and Black nationalism, drawing out Ra’s vision of Black culture as rooted in ancient traditions and bound for a cosmic future. 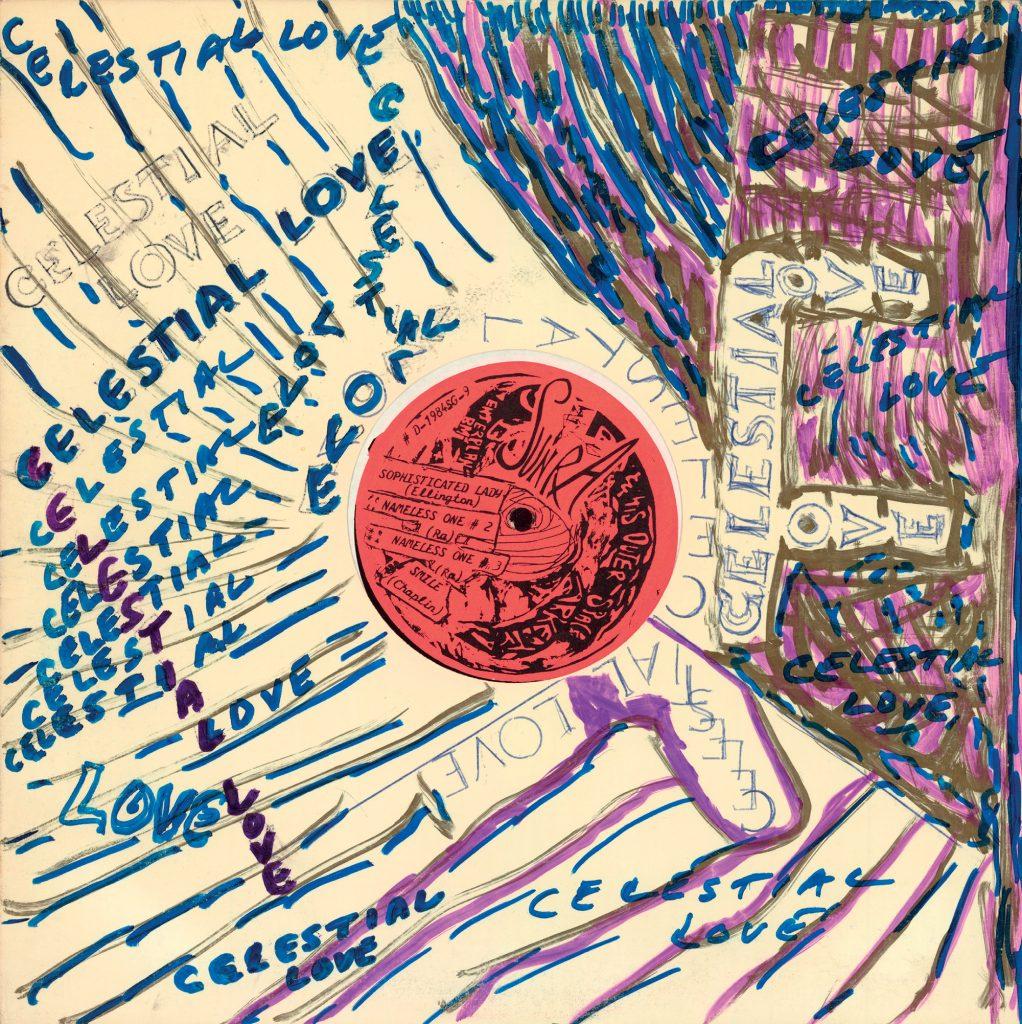 Some covers featured collages, others black-and-white photos colored in with markers; some carried haphazardly drawn geometric patterns, while others were striking for their spare abstractions. Most had scant information about the album’s contents, much less the record’s title.

“Each sleeve became a unique work of art,” Chusid told Artnet News. “Like any art form, some works were better than others. But compared to printed covers rolling off an automated press, the homemade covers contained the band members’ physical and creative DNA.”

Over the decades, a fierce collector’s market would form around these DIY sleeves. Art on Saturn’s co-editor, Chris Reisman, is one such collector whose huge stockpile of Ra album covers made it into the book. To source other sleeves, Chusid said, required some negotiation, to say the least.

“There’s a worldwide network of Ra album fanatics,” he said. “We reached out to those we considered most sane and asked to borrow their sleeves for scanning. If they refused to lend the jackets—we’re talking obsessive protectiveness—we accepted scans they provided, and gave specific instructions on how to do it correctly.” The scanning, image processing, and restoration work on these images was also completed with help from Barbara Economon, a digital media specialist at the Walker Art Center in Minneapolis.

(Chusid himself does not own a handmade Ra cover: “I hope to never develop the habit. It’s expensive, it’s highly competitive, and if you’re outbid, you experience common stages of loss and grief.”) 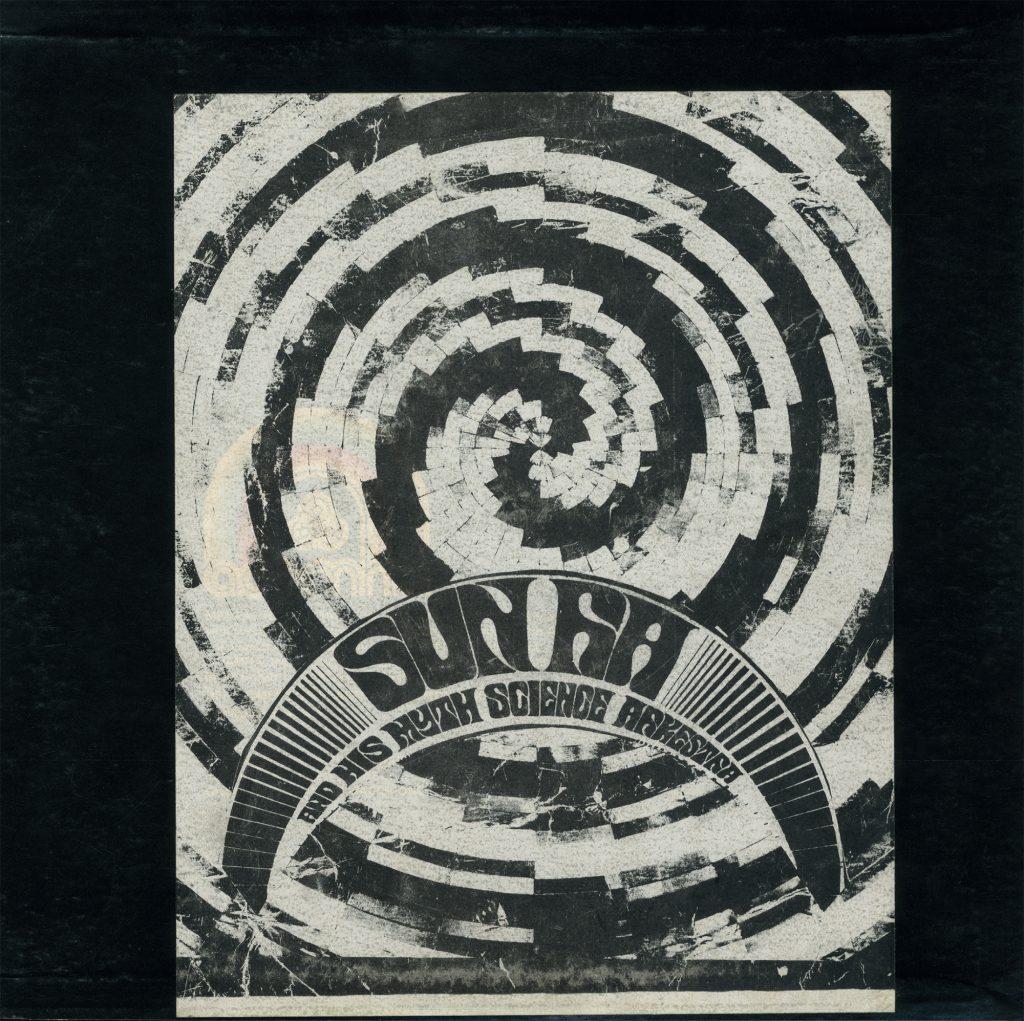 Viewed together, Ra and his band’s handmade cover art epitomize what Chusid, in Art of Saturn’s introduction, describes as an “idiosyncratic art form,” made up of singular artifacts offering a celestial reimagining of the Black narrative. Pundits today might deem that aesthetic “Afrofuturist,” though Ra existed long before such a category arrived to classify his art. And if such a term was kicking around back then, there’s a pretty good chance Ra would be pushing at its edges.

“Ra was a control freak in every aspect of his creative life—his composing and arranging, his recording, his art, his band. He had a vision, and pursued it. For that reason, Ra was invariably out of fashion, defying trends, and never in vogue,” said Chusid. “He was sui generis.”