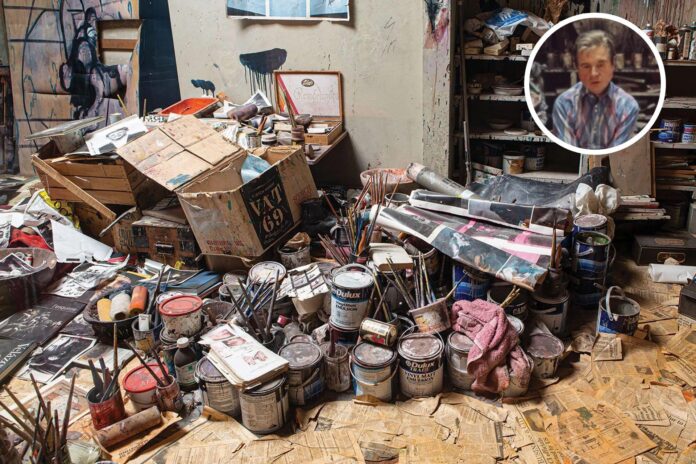 Barry Joule, who donated his Francis Bacon archive to the Tate, tells The Art Newspaper that its decision in June to return a thousand items was at his insistence. “Tate capitulated to my legal demand,” he says.

On 8 June we revealed the Tate’s decision to return the archive to Joule, the friend of Bacon who had donated it. Joule has subsequently provided The Art Newspaper with a lengthy and detailed response to the Tate announcement.

In January his lawyers, Collyer Bristow, had demanded “the return to Joule of the entire donated archive whilst highlighting the non-fulfilment of the Tate/Joule contract”. Joule says that he had “long suspected they [Tate] wanted to hang onto it forever, lingering in their basement vaults, and for me to shut up and go far away”.

The Tate’s 8 June statement said that the Joule donation had been “researched by art historians, and this research has raised credible doubts about the nature and quality of the material”.

The Tate statement added: “The material does not lend itself to any significant exhibition, and any potential it held to improve the public’s understanding of Bacon’s art has been exhausted. It has therefore been considered unsuitable for retention in Tate Archive. In the first instance, it has been offered back to the donor, in line with the donor’s wishes.”

It is most unusual for the Tate to deaccession works, or archives, and this decision needed to be approved by the gallery trustees.

In his response, Joule explains that he had acquired around a thousand documents and sketches, which he is convinced are from the hand of Francis Bacon. Joule, a neighbour of Bacon’s, had known him since 1978. He would do occasional odd jobs for the artist and became a friend.

Joule’s collection donated to the Tate included 800 magazine and newspaper cuttings, some bearing pencil and pen marks and daubs of paint. There were also 39 photographs of Bacon and his friends, books and other documents. Finally, there was the so-called “X Album” of overpainted sketches, which the Tate now describes as “of unknown authorship”. Joule has always vigorously defended the authenticity of all the items.

The collection was apparently given by Bacon to Joule at his Reece Mews studio in London on 18 April 1992, ten days before the artist’s death. Joule cites a witness who recorded seeing the artist help load up his car with the papers.

Joule handed over the archive to the Tate for examination in early 2003. A contract donating the archive was subsequently signed on 15 January 2004, with no requests for payment or tax concessions.

At the time of the donation the papers were described as probably the Tate Archive’s most important acquisition ever. Press reports suggested that it might be valued at up to £20m, although the source of this figure is now unclear.

The 2004 press announcement stated that “Tate will undertake to study, photograph and catalogue the collection over the next three years, before displaying these items and making them available for loan”.

Joule says that, despite the promise of an exhibition, this never occurred in what is now more than 18 years. Disappointingly, the archive was not digitised and posted online, although he says he had offered to fund this. Joule blames the Bacon Estate. “Over the years they have continually exerted their considerable influence on the Tate to make certain the archive was never exhibited,” he says.

In June last year the Francis Bacon Estate, set up by the artist to administer his inheritance, published an analysis of the Joule archive by their archivist, Sophie Pretorius. Her essay was included in the estate’s publication Francis Bacon: Shadows. The Tate’s private letter to Joule, informing him that the archive would be returned, relied heavily on the Pretorius research.

Joule is dismissive of the essay. He describes it as “fake news, peppered with cheap shots and slurs at myself, filled with omissions and glaring inaccuracies”. Joule points out that Pretorius failed to contact him for any information while she was working on his archive.

Details are disputed. Pretorius writes that Bacon never used charcoal, which appears in some of the items in the Joule archive. Joule disagrees, pointing out that he was in Bacon’s studio on numerous occasions, whereas she was not.

Joule also stresses that his archive has been exhibited at major museums, including the Irish Museum of Modern Art in Dublin, the Barbican Art Gallery in London, the National Gallery of Canada in Ottawa, the Musée Picasso in Paris, the Fondation Maeght in Saint-Paul de Vence and, most recently, the Shoto Museum of Art in Tokyo.

The Barbican catalogue was published with support from the late David Bowie. Joule says that Bowie was deeply involved with its production, “even insisting on the disturbing transformation image for the cover”.

In April this year Joule told The Observer that he has now cancelled plans to give the Tate hundreds more items that he had saved from Bacon’s studio. He lives in France and instead intends to offer them to the archives of the Centre Pompidou in Paris. “The Tate and Britain will be missing out on part of the nation’s art history of one of their most important painters. I turn my back on the Tate forever.”

A spokesperson for the Centre Pompidou says that it “hasn’t had any contact with Barry Joule in this matter and we only learnt about it through the press”.

The Francis Bacon Estate comments: “Many specialists from within the Estate and without have studied the material, coming to the conclusion that the material does not bear any substantial evidence of Bacon’s hand.”