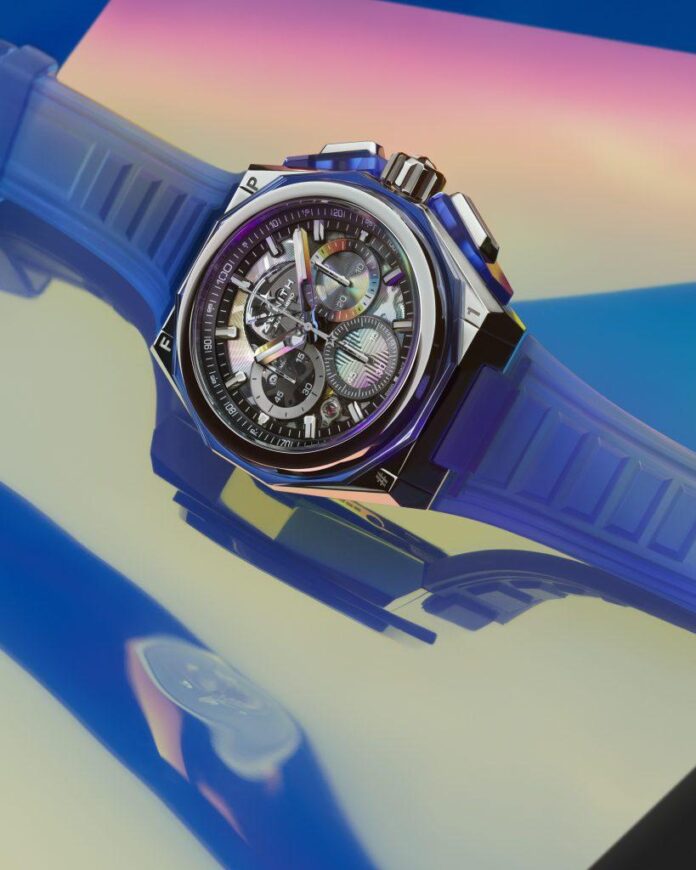 The Argentinean-Spanish artist Felipe Pantone excels at distilling the internet age. His sleek and chromatic works can appear as if an elegant computer virus has somehow spread out of the machine and digitized reality. He might have sci-fi leanings, but his worldview is far from dystopian. He finds beauty in the datastream, but his work is also inspired by kinetic motion and the blur of modernity.

Pantone (b. 1986) honed his skills as a teenage graffiti writer prior to art school, so his graphic sensibility is an interesting amalgam of his dichotomous education. The Valencia-based artist also happens to be a major watch geek, which has made him the the perfect collaborator for the Swiss luxury horologer Zenith. In 2021 they launched a limited run of the manufacture’s futuristic Defy 21 series; it immediately sold out.

Now, for his latest team-up with Zenith, Pantone has riffed on his “Planned Iridescence” series of holographic works to produce the Defy Extreme Felipe Pantone, available October 27 and limited to 100 numbered pieces. At the heart of this futurist vision is an explosion of ephemeral color that comes from the reflection and glare on not only the angular, mirror-polished stainless steel case, but also from the synthetic sapphire crystal that encases the face. The underside of this highly refractive glass slyly bears micro-engraved patterns just 100 nanometers deep. The effect is a secret hologram for the wearer, who can also switch out the band from translucent blue silicone to stainless steel or to black Velcro with a press of a button on the back.

We recently chatted with the artist about watches, art, and how each reflects the vibrancy of life. 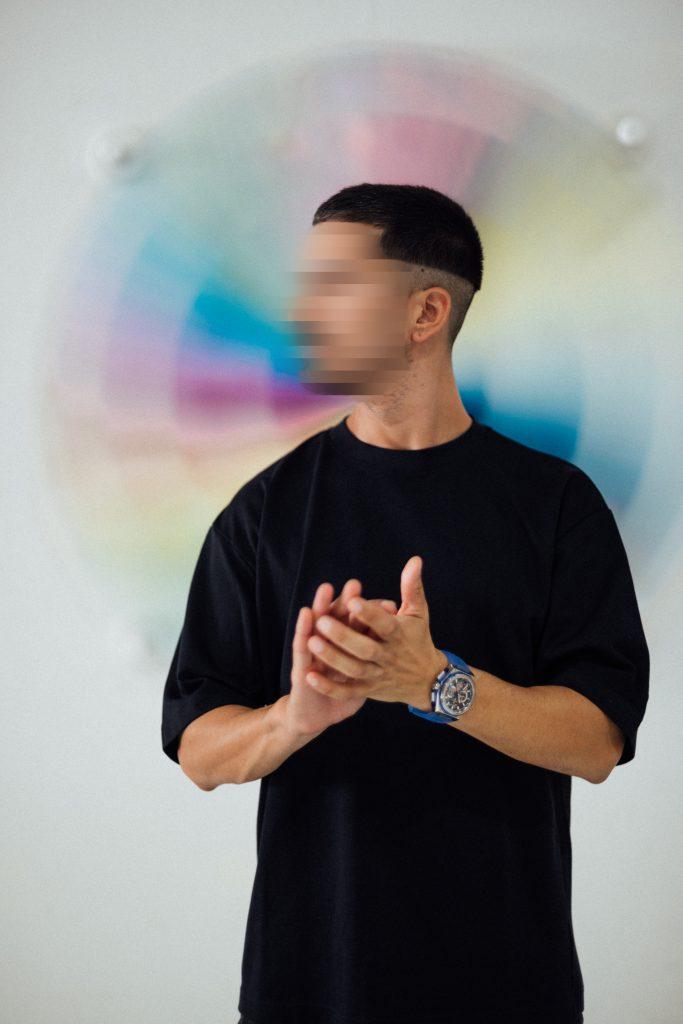 The mysterious artist Felipe Pantone sticks to his graffiti roots and obscures his identity. Courtesy of Zenith.

I like that you wield restraint. This watch doesn’t scream “artist collaboration,” where you flex and saturate every element of it. The design is chic and the wearer won’t tire of it.

Thanks. At the end of the day, it’s a utilitarian object; it’s not just a piece of art. So you want to make something that’s wearable, that actually tells the time, and makes sense as a watch. You wouldn’t buy it just because it’s an artist collaboration, right? You want to buy a good watch. I love watches. I really do pay attention to what’s being released. I would like my watch to be something that makes sense within the watch world, not just for it being an artist collaboration. 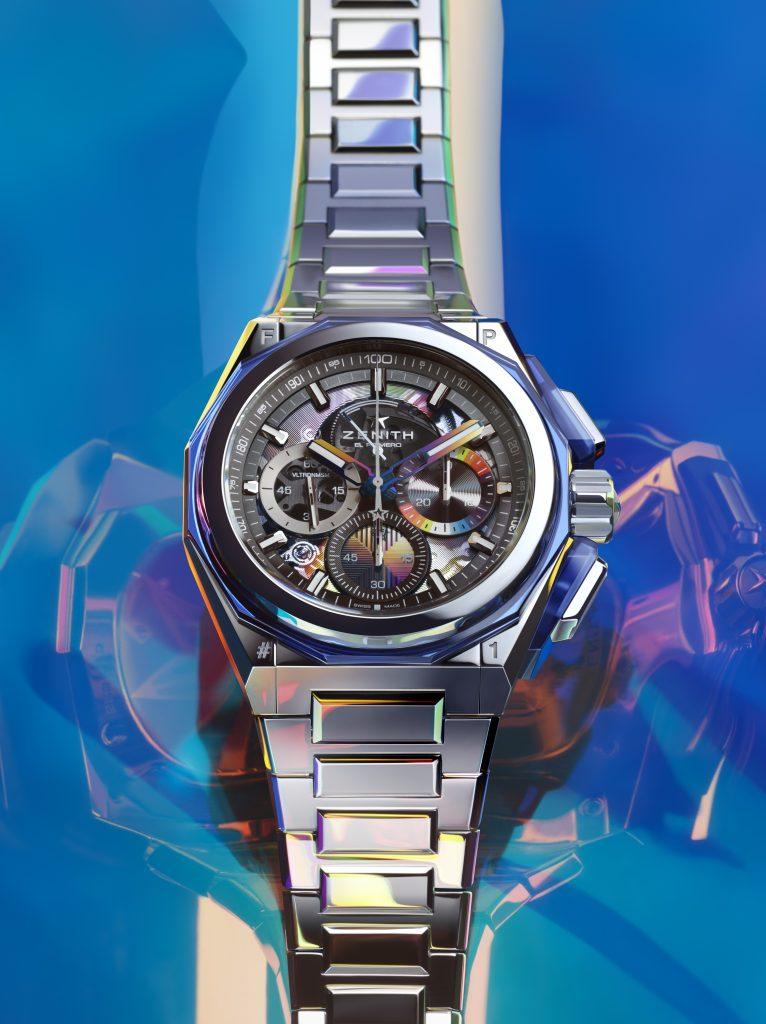 The Defy Extreme Pantone Edition with the steel band. Courtesy of Zenith.

I really dig the colors you work with, especially the semi-transparent blue band. The result is very modern. Tell me about envisioning this watch.

I have a big range of colors within my work, but I tend to use colors more toward the cold part of the spectrum than the warm part. So blue is always really important. If you look at tech company logos and even the operative systems, they usually tend to have more blue in them. That’s something that I take into account in order to try to convey this idea of the present digital times. We managed to do a laser-engraved hologram on a piece of sapphire that only reveals if it’s seen under the right light, sort of like a radial CD effect. Even if you are wearing the watch and you don’t have the right light on it, you wouldn’t see it. I’m very proud of that because it took ages to develop. It is influenced by my “Planned Iridescence” series, for which I created an acrylic-like material printed on both sides. With effects, I can organize the iridescence of the material to move horizontally, vertically, even spin. So, this is a technique that I applied to this watch. 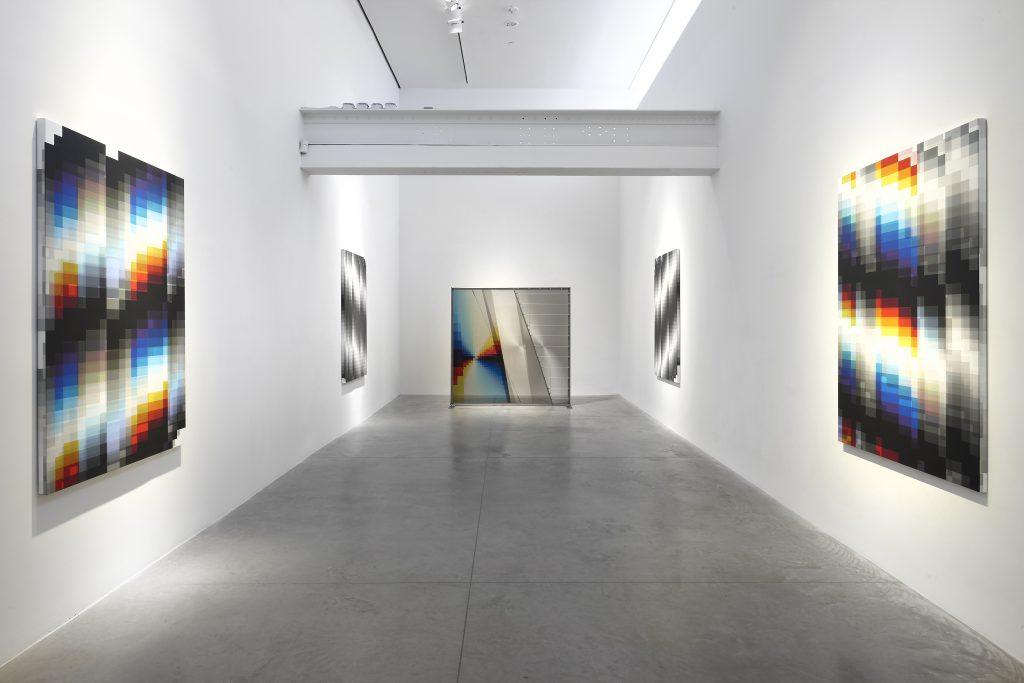 It’s interesting that a lot of your work deals with technology, and watches are a confluence of old-world tradition and advanced machinery. Watch companies are on a never-ending quest to perfect and advance the inner workings. They’re anachronistic and futuristic at once.

People that appreciate art, we tend to appreciate beauty and technology. It’s fascinating what humans are able to make, especially at such a small scale. Every time I go to the Swiss factory my mind is blown.

With this watch you can actually see what’s going on inside the movement. It reminds you that nothing is still, that everything keeps moving all the time and changing. It resonates with the themes I usually work with. 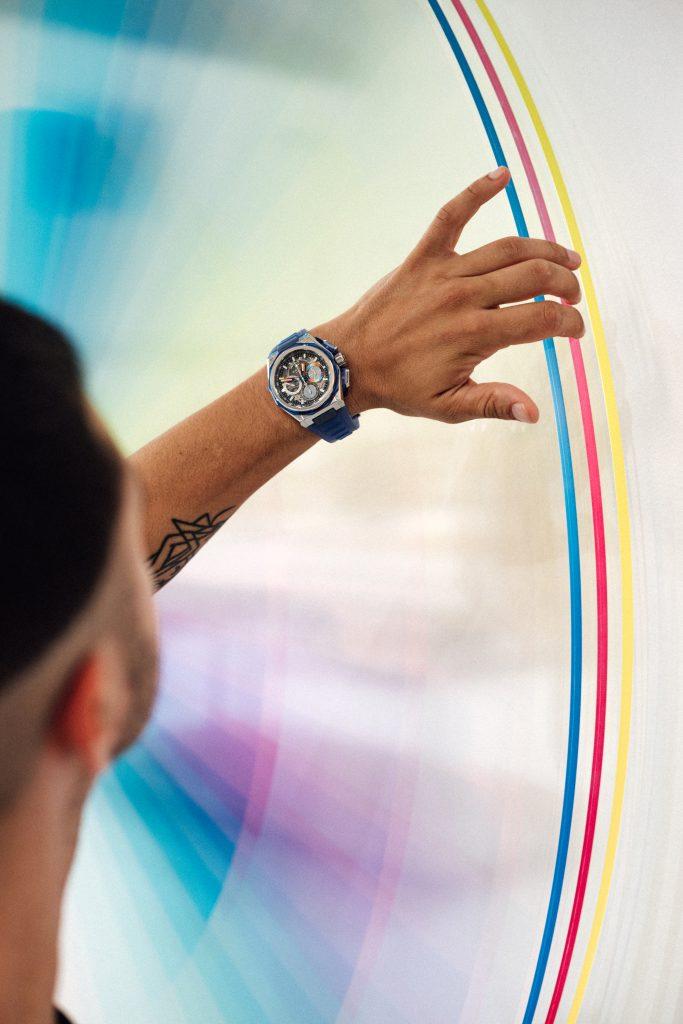 You grew up doing graffiti, and then you went to art school. Did one of these shape you more than the other?

I don’t think one is more important than the other. Everything is learning. I started doing graffiti when I was 12. I did graffiti for 20-plus years. When I was 18, I went to art school, and it was very informative because art is not a thing in my family. My dad used to be an ironworker and my mom, she would clean or help my dad. I learned what it meant to be an artist in art school. I learned what the art world was in art school. I studied art history. So that was very important for me as well. Graffiti taught me everything from painting techniques to connections, getting to see the world and travel for no money and sleep on people’s couches all over the world for free. Art school taught me what making art was really about—I had no idea, because in my opinion, graffiti has very little to do with art. It’s a little bit more of a game, where you play against other graffiti writers to see who plays more and in more places. So, I got to learn about art history and how I could contribute in a way or try to contribute to the art world.

I would also think that graffiti can be a bit more graphic, whereas with art you learned to put more ideas into the work and make them concrete.

Absolutely. I learned graphics with graffiti. I learned letters, typography, color, and painting large-scale. However, I learned nothing about concepts, and that’s all art is about, in my opinion. It’s all that matters, really. Concepts. 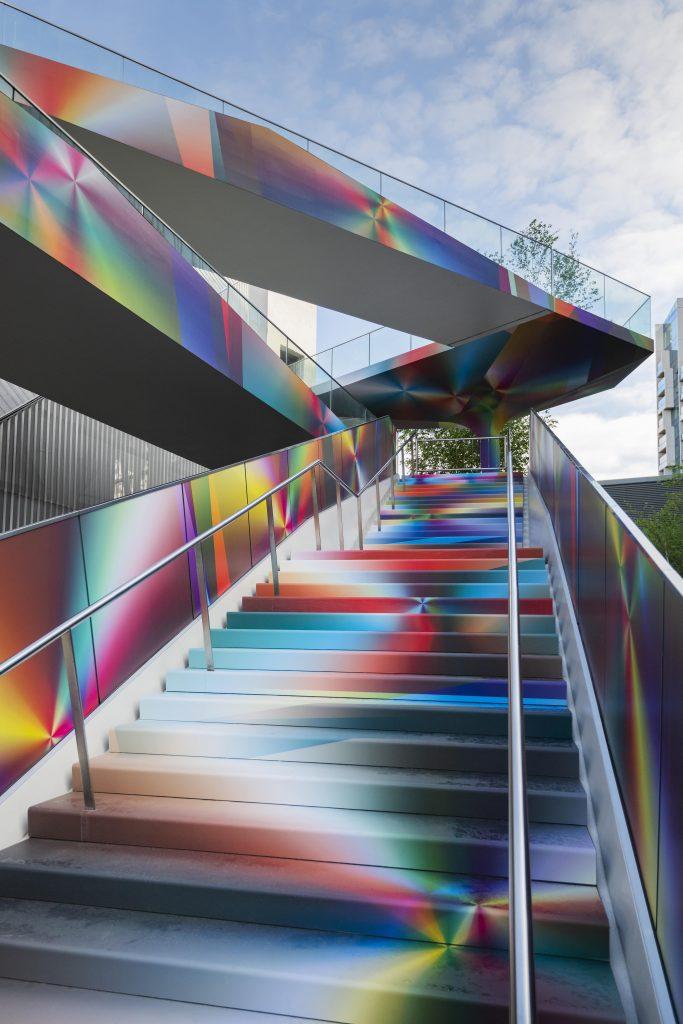 The dialogue around your art is often that it is connected to technology and the modern world. I was wondering if you’ve had a restart—like many of us have had in the last couple of years—where you’ve reconnected with nature more than before?

I think my work is changing. Before I used to try to convey this idea of what I felt the present times were about, which was my life. I felt like a very contemporary person, right? Because I used to travel a lot and I used to be very connected with a lot of people because of my graffiti background. But I did connect a lot more with nature. I got to stay more at home and at my studio, reflecting. I think the work that I’m doing now is way more minimalistic. I’m also working a lot more with transformation, which doesn’t necessarily have to do with speed anymore, not as much as it used to. I’m tending toward more harmonious compositions.

Well, it sounds like you’re in a happy place, spirit-wise.

I’m a happy person, very much! I do what I love every day and my work keeps evolving. It’s important for us to continue growing. I have no idea where my work or my life’s going to take me. That excites me. I like that sense of uncertainty.