Home News The archaeological discovery of the century? What the San Casciano bronzes tell... 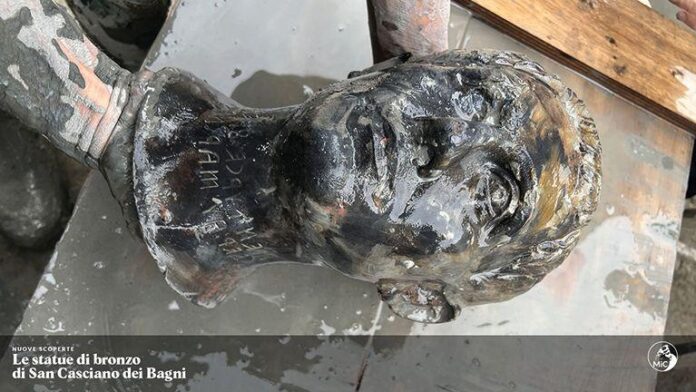 Over the summer, in the foothills of the tiny Tuscan hilltop town of San Casciano dei Bagni, a group of archaeologists gathered by the ruins of an ancient thermal bath and began to dig. For months they slogged through blazing heat, until, suddenly, ancient treasures emerged from the hot mud and old stone.

“First we saw gold coins,” recalled Emanuele Mariotti, one of the leads on the dig. “Then we saw stone columns, then an arm, then a head—then everything.”

The team had run into what is already being hailed as one of the most spectacular archaeological discoveries of a generation, possibly surpassing the Riace bronzes, the rippled bronze warriors crafted by Greek artisans in the fifth century BC and surfaced by a diver off the southern Italian coast in 1972.

At the bottom of a deep underground pool adjoining a sacred bathhouse complex built in the third century BC, the archaeologists had uncovered 24 stunningly preserved bronze figures, featuring finely detailed divinities and religious offerings. For more than 2,000 years the objects had been entombed in a clot of mud and boiling water fed by powerful thermals, sealed off from the elements under a mass of enormous stone columns.

Speaking from the makeshift encampment where the archaeologists, along with a few stray cats, kept vigil over the excavation, Jacopo Tabolli, the coordinator of the dig and a professor of archaeology at the University for Foreigners of Siena, explained the significance of the discovery.

“We have other beautiful statues from the Etruscans and Romans, but the difference is they come from old excavations and not from something that has been done in the modern historical method,” he says. “Now we have a chance to rewrite history, because we can understand exactly how they were placed, what material was used, when it happened, how it happened.”

Tabolli suspects that the statues once stood around the pool’s stone rim, before someone—priests, or perhaps artisans—hefted them into the muddy shaft using ropes and wooden ladders and then carefully arranged them as part of a healing ritual. The nearby baths, which were primarily enjoyed by locals, are indeed renowned for their sanitary properties, and the artefacts found at the sanctuary all seem to carry some connection to healing: the trove includes human-size depictions of Apollo, the Greek god of health, and Hygea, the goddess of medicine, as well as a number of smaller bronze sculptures depicting limbs and sexual organs. Legs, a lung, a uterus and a penis all feature, which Tabolli says suggests a particular fixation on pregnancy and birth.

Even today, the baths retain that association with healing, and they are something of a local tourist attraction. On the day The Art Newspaper visited the site to speak with Tabolli, Italians of all ages were convalescing in the waters, cheerfully half-naked in the November cold and chatting animatedly.

The objects found by Tabolli’s team also shed light on several centuries of dramatic demographic and political changes. San Casciano and the surrounding region of Tuscany were once home to the sophisticated pre-Roman Etruscan civilisation, which in the first century BC was violently subjugated by the Roman Republic.

Inscriptions on a number of the artefacts feature the names of local, wealthy dynasties in both the Etruscan language and archaic Latin, suggesting the sanctuary was enjoyed by elite bathers drawn from the upper-crust of both civilisations. Tabolli says the use of Etruscan language during the Roman period suggests that at least some of those nobles wanted to pointedly assert their identity.

He believes that a flourishing, if uneasy, multiculturalism took hold in the region as power transitioned, and that the process of Romanisation was more gradual than previously imagined. “The interesting thing at the sanctuary,” he says, “is that the Etruscans and Romans are together, regardless of the conflict that may have taken place outside this sacred space. Here, for a certain amount of years, they prayed together.”

Over the years the rituals developed. Statues and votives gave way to gold coins in the imperial era, and by the fifth century worship at the site had ceased altogether. Around that time, according to Tabolli, a group of early Christians discovered the sanctuary, and swiftly covered it up with giant stone columns.

“Usually the Christians robbed these kinds of places, or destroyed them,” says Ludovico Salerno, a spokesperson for the dig. He says this case was different, however, and that the Christians “didn’t touch anything”. He adds that after burying the statues they may have killed any local pagan priests, to hide the evidence.

“They were superstitious,” he says. “They saw and understood the power of this place. They feared what they didn’t understand—so they erased it from history.”

And yet by entombing the deposit under huge pillars, the Christians had unwittingly provided a vital historical service. “We were very lucky about the way it was closed in the sixth century,” Tabolli says. “It is destruction that occurred in an ordered way. In a way, they put the sanctuary to sleep—it speaks to the value of this water.”

Tabolli was not the first archaeologist to surface traces of what lay beneath the columns. Hints of the artefacts first emerged in the 16th century, when the powerful Florentine Medici family cleared the area to construct a new set of baths over the old hot springs. The dynasty’s archaeologists uncovered altars to pagan gods, including Apollo, but they didn’t excavate further. They did, however, make a note of the find. Over the subsequent centuries the site was neglected, and by 2019 it was an orchard.

That was the year Tabolli’s team, with the encouragement of San Casciano’s local government, began work on a detailed archaeological map of the area around the main bathhouse, using complex modern techniques involving radar and thermal cameras. They did not expect much, so were surprised to find a set of antique columns, ten Roman feet apart, just out of range of the initial dig site. They shifted and intensified their focus, and for three years they excavated the site, often in trying conditions. “The spring is refilled with ten litres of water every second,” Tabolli says. “It was like excavating an open fountain.”

The find is also a potential game-changer for the town of San Casciano, which financed and supported the effort from the outset, with the subsequent help of a government fund called Art Bonus, which pitched in €100,000. The town’s mayor, Agnese Carletti, hopes that the discovery will attract tourism and investment, and is working on a museum to house the bronzes. The Italian Ministry of Culture recently offered to support that venture, purchasing a sumptuous 16th century structure in the town that it plans to convert by the end of next year. “A museum would allow inhabitants to restore their history and reclaim their sense of identity,” Carletti says. “It would bring faith.”

Tabolli and his team are now focused on the expensive and arduous process of restoring the artefacts, which have been spirited away to a laboratory in nearby Grosseto. The excavation will resume next summer.