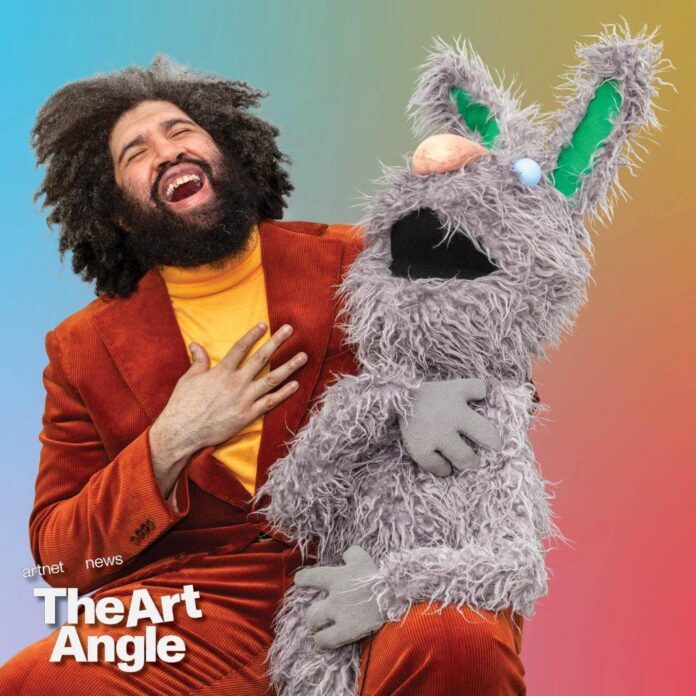 Jayson Musson has a unique status in the art world: he has the persona and perspective of an outsider, but he’s also something of an artist’s artist. Originally from the Bronx, Musson got his creative start in Philadelphia in the 2000s, creating cerebral, satirical street art; penning a column for the called “Black Like Me“; and performing in the cult hip-hop group Plastic Little, which put out songs like “I’m Not a Thug,” “Rap O’Clock,” and “Miller Time.”

Musson again popped up unexpectedly onto the radar in 2010 with “Art Thoughtz,” a DIY YouTube series that immediately became a treasured reference in art school and art media. It starred Musson in the persona of “Hennessy Youngman,” fusing the styles of art theory lecture and Def Comedy Jam, monologuing about everything from concepts of beauty to Damien Hirst’s tendency to make faces in press pics. It was fresh enough to surprise, and knowing enough to be a hit.

Musson has worked in a variety of styles in the last decade, from painting to sculpture to children’s books to mix tapes. He’s back this month with a very different spin on art education at Philadelphia’s Fabric Workshop and Museum. Titled “His History of Art,” the new show has a characteristically offbeat premise. It takes the form of a combination of sitcom and PBS edutainment, with Musson starring as Jay, explaining the value of art history to Ollie, a rabbit played by a puppet. And there are lots of other surreal detours along the way.

Ben Davis, Artnet News’s national art critic and a Jayson Musson fan, recently had a chance to talk to the artist about his unusual career and the idea behind his new riff on art history.

Listen to other episodes:

The Art Angle Podcast: What Does the Future of NFTs Look Like Now?

The Art Angle Podcast: How Kennedy Yanko Welded Her Way to Art Stardom

The Art Angle Podcast: How Documenta Became the World’s Most Controversial Art Show

The Art Angle Podcast: Want to Wear a Basquiat? Inside the Big Business of Artist Merch

The Home of Ronald Lauder, Along With Its Vast Private Art Holdings, Has Been Reproduced Inside the Neue Galerie New York