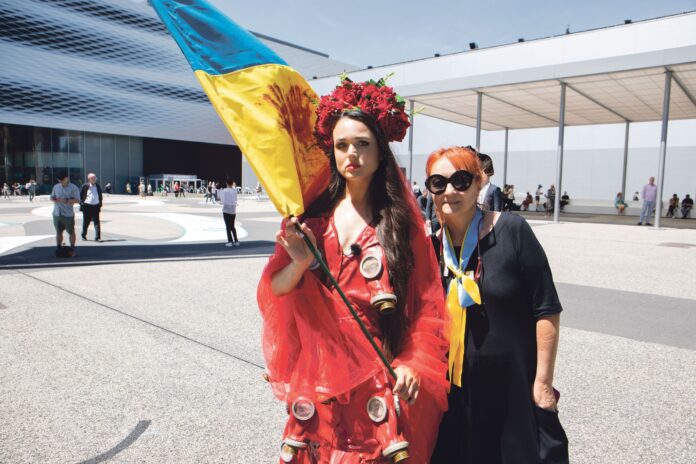 Visible among the crowds crossing the Messeplatz on the preview day of Art Basel was a woman wearing a dress made from red gas masks, each of which was emblazoned with printed cut-outs of the eyes of Vladimir Putin. In her hands she brandished a large Ukrainian flag bearing handprints the colour of dried blood.

The performance work, Chernobyl Bride, was devised by the Swiss-French artist Isagus Toche prior to Russia’s invasion of Ukraine in February as an allegory for a bride “who lost everything” in the 1986 Chernobyl nuclear disaster. The piece gained new resonance as millions of Ukrainians’ livelihoods were destroyed in the ongoing war, Toche says. The performer, Olesya Lesnaya, is from Vinnytsia in west-central Ukraine. She fled in late March and is now being hosted as a refugee by Toche in Geneva. “It is highly important to constantly remind people what the reality of the situation is back home,” Lesnaya says.

A few minutes into the performance a security guard approached Lesnaya and asked her to move off the Messeplatz, which is hosting a large floor installation by the late artist Lawrence Weiner. “If an artist cannot stage a performance here, the so-called mecca of contemporary art, where can they?” she asks. A spokesperson for the artist says she is now in talks to stage a sanctioned version of the performance on Wednesday.

In a statement, a spokesperson for Art Basel says: “We stand in solidarity with the Ukrainian people and all those who oppose war, anywhere around the world.”

Toche has staged variations of this performance, most recently in Paris, which involved “huge amounts of fake blood”—a material she says she was unable to source in sufficient quantity in Basel.

Amid art fair cancellations in the city, London Art Fair opens with everything to prove

Major U.S. Auction Houses Have Reportedly Been Subpoenaed as Part of a Federal Investigation Into Sanctioned Russian Oligarchs