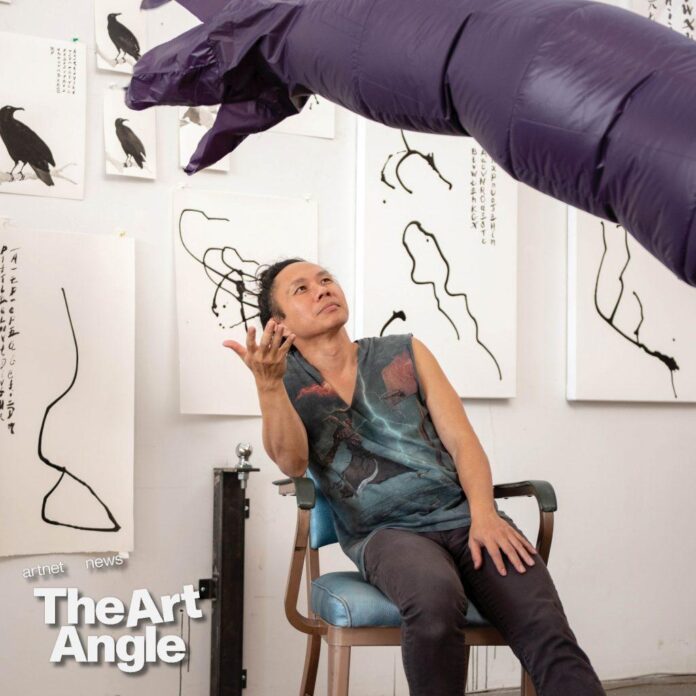 Anyone who’s driven by a car dealership in the U.S. has probably seen them: Inflatable nylon figures with smiley faces, bending and twisting in the breeze. These roadside attention getters are known in the marketing world as “tube men” or “sky dancers.” Paul Chan calls them “Breathers,” and they have played a central role in the artist’s practice since he debuted his own uncanny renditions of the dancers in 2017 at Greene Naftali gallery in New York.

The swaying figures also symbolize the artist’s own winding approach to his practice, and the need, sometimes, to take a breather. After working primarily with video early in his career—including violating sanctions to shoot a video essay in Baghdad during the U.S. occupation—Chan grew exhausted by screens. He left art production for five years and opened his own publishing house, the beloved indie outfit Badlands Unlimited, which has put out eclectic titles ranging from Saddam Hussein’s speeches on democracy to the interactive e-book What Is a Kardashian?

Chan made his return to visual art after realizing that those car-lot tube men could be turned into offscreen animations. Now, the “Breathers” are the centerpiece of a major solo show at the Walker Art Center in Minneapolis, open through July 16. Artnet News’s deputy editor Rachel Corbett sat down with Chan—a recent winner of the MacArthur ‘Genius’ grant—to talk about the tyranny of screens, his early adoption of crypto, and the importance, in every artist’s life, of simply taking a break.

The Art Angle Podcast: Is Progress in the Art World Just a Mirage?

The Art Angle Podcast: Are Climate Activists’ Art Attacks Helping or Hurting Their Cause