Home News The Art World Redoubles Its Support of Iranian Protests, With Actions in... 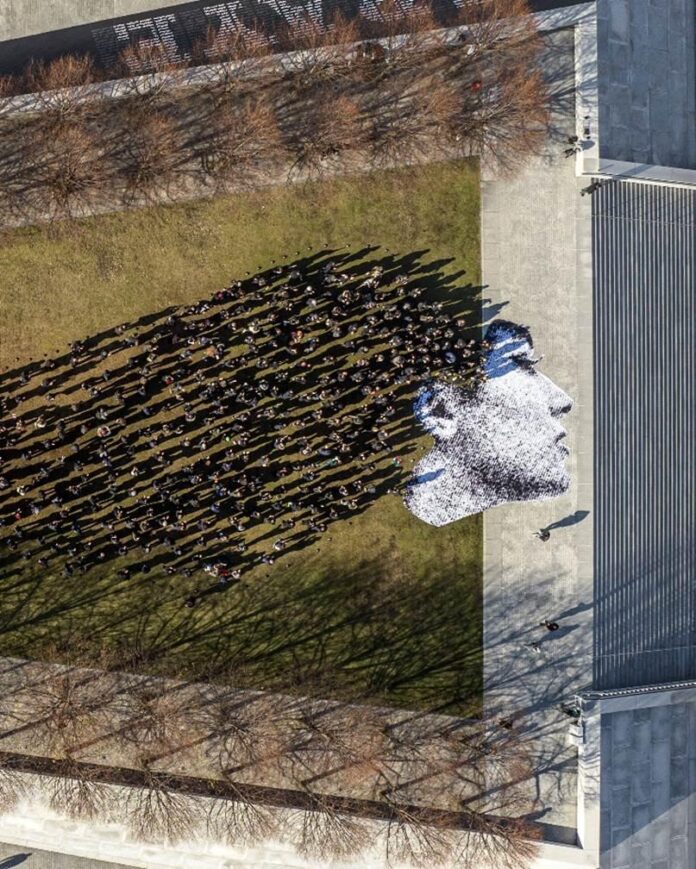 The art world is continuing to take a stand in support of the ongoing women’s rights protests in Iran, with actions last weekend both in New York and during the Art Basel Miami Beach art fair. A new open letter of solidarity, released December 6, has also been signed by more than 500 artists, writers, and academics.

Since September, Iran has been rocked by protests sparked by the death of 22-year-old Mahsa Amini, arrested by Tehran morality police for violating the law requiring women cover their head with a hijab in public. In support of these protests, the activist art collective For Freedoms unveiled their project “Eyes on Iran” in New York on November 28, in FDR Four Freedoms Park on Roosevelt Island.

Adding to the public art installation (on view through January 1, 2023), which includes a giant black and white photograph of an eye by Shirin Neshat, was French street artist JR. On Sunday, he staged an interactive installation in memory of 16-year-old Nika Shahkarami. The Iranian teenager became one of the first women killed in the protests after she was documented on video removing her hijab in front of a burning dumpster.

Hundreds of activists stood on the ground beside a photo of Shahkarami’s face printed on cotton canvas. The human participants formed her hair, streaming out behind her. They chanted “freedom for Iran” and, in both English and Farsi, “women, life, freedom.”

“Those three words—’woman, life, freedom—say it all,” JR told CNN. “Everything I’m trying to do with my work is to summarize those words as an image, to bring photos of Nika alive, to make her hair longer and longer every city we go to.”

For Freedoms also flew banners past the Statue of Liberty over the weekend. The flags festooned with eye-shaped logos also surrounded by the words woman, life, freedom, were designed by the group’s co-founder Hank Willis Thomas and artist Mahvash Mostala. The collective is calling on the United Nations to oust Iran from its Commission on the Status of Women in an upcoming December 14 vote.

There were also airborne messages in support of Iran to be seen in Florida, as Miami Art Week was wrapping up. On multiple afternoons, a plane flew along Miami Beach, proudly carrying a banner proclaiming: “Free Iran: Woman, Life, Freedom.” The action was the work of Unite and Conquer, a South Floridian organization that supports the people of Iran.

A pair of digital billboard trucks crisscrossing the city throughout the weekend amplified the message, featuring rarely seen on-the-ground footage of the protests.

Last Saturday afternoon, guests exiting the tent for Untitled Art Miami Beach—which prominently displayed a copy of Neshat’s piece on Roosevelt Island—encountered Unite and Conquer protesters lining the pathway to the fair. They were seated on the ground, hands tied around a pole, with a cup of water just out of reach.

The performance was a reenactment of a photograph of the torture of Khodanur Lojei, a 27-year-old protester who Iranian authorities detained and killed in October, during one of the Mahsa Amini protests.

Lojei’s torture inspired a similar action last month at the Los Angeles County Museum of Art, where protestors tied themselves to the lampposts of the beloved Chris Burden public art installation . 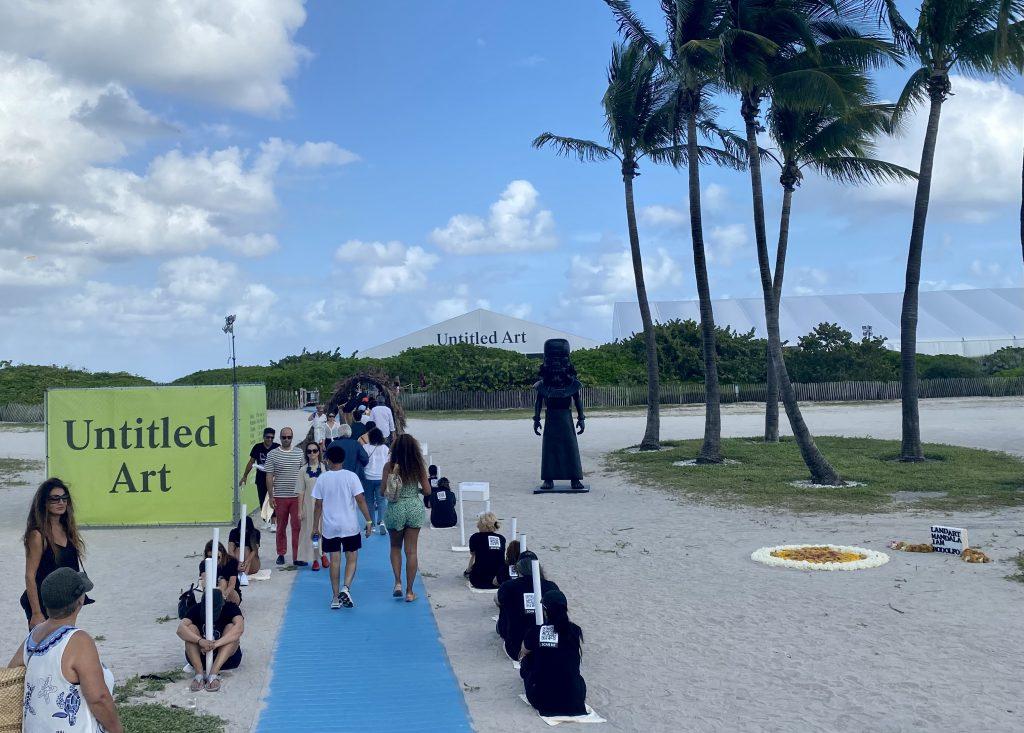 Other high-profile art world demonstrations in support of the people of Iran have taken place at the Solomon R. Guggenheim Museum in New York and the San Francisco Museum of Modern Art, where activists unfurled blood red banners featuring an image of Amini’s face and the “woman, life, freedom” motto.

This past weekend also saw activist group Woman Life Freedom NYC  stage a die-in at the Metropolitan Museum of Art in New York.

The art world is also voicing its commitment to human rights in Iran in other ways. In October, an open letter was published from more than 6,000 Iranian artists, scholars, critics, art historians, and curators, in support of art students taking part in the protests. U.S. cultural figures followed suit this week with a Solidarity for Iran open letter, signed by more than 500 people, including artists Cindy Sherman, Kara Walker, Kiki Smith, Marina Abramović, and Anish Kapoor, as well as art critic Jerry Saltz.

The letter expresses “our grave concern… for citizens from all over the country who face an increasingly brutal, violent, and deadly state crackdown, with kidnappings, disappearances, imprisonments, and multiple forms of physical, psychological, and sexual abuse, torture, and open threats of mass executions.”

The signatories “support the call of our Iranian colleagues to stand in solidarity with their struggle against the repressive and despotic Islamic state in Iran,” the letter stated. “We, the undersigned, unreservedly acknowledge and support the courage of all the women, men, and children of Iran in their fight for fundamental human rights.”