Home News The Big Review: Vittore Carpaccio at the National Gallery of Art in... 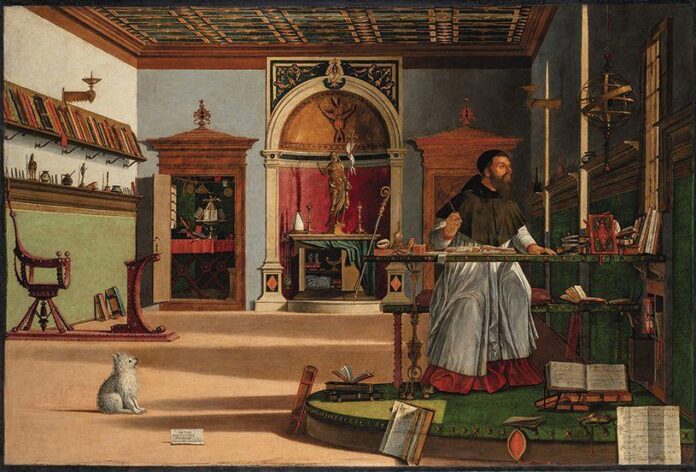 A wistful pilgrim sits on a marble step in the right foreground of Vittore Carpaccio’s Ordination of St. Stephen (around 1511). Turning to gaze at the picture’s protagonist, he is below the consecrating hand of St. Peter himself. Stephen heads a ritual formation of youthful aspirants to the office of deacon, all of them wearing sumptuous dalmatics of luminous embroidered silk, or red velvet in the case of the proto-deacon and proto-martyr.

There is so much for the eye to linger on here that it soon occurs to you the pilgrim must embody a vector function: the diagonal of his tilted pose focuses your gaze on the ritual action, and yet inevitably draws you to look beyond into the pale, stony world of the ancient city to the right (Jerusalem, but architecturally reminiscent of Venice and Rome) and the decaying pagan shrines below giant hills to the left. At the edge of the picture is the pilgrim’s hat and staff, with a paper scroll affixed bearing the artist’s signature and the date 1511. The pilgrim is as close as we get to a self-image in Carpaccio’s art—not a self-portrait, but a staging of an authorial self, one who guides and points in the staggering plenitude of his painted worlds.

Martyred by stoning, Stephen became the patron saint of stonemasons and bricklayers, a group from which the Venetian Scuola di Santo Stefano—which commissioned the five paintings on the life of the saint—drew its members. In the exhibition, it is Carpaccio’s renowned Scuola paintings that are the inevitable standouts. In addition to the St. Stephen canvas, the exhibition brings together the scattered cycle (from Bergamo, Milan and Venice) of the Life of the Virgin (around 1502-08) that Carpaccio painted for the Scuola degli Albanesi. Uneven in quality compared to other confraternity commissions, the cycle is stronger in its collective impact than its individual components. It is instructive in showing the artist’s reliance on a substantial workshop even relatively early in his career.

Another level of ambition and accomplishment is seen in St. Augustine in His Study (1502-08) and St. George and the Dragon (1502) from the Scuola di San Giorgio degli Schiavoni. In the gallery these are accessible to view in ways their normal placement at the Scuola prevents. In the former, a sense of the miraculous is established by a flood of light from a window, marking the visionary revelation to the scholar-saint of the faraway death of St. Jerome. The light signals other kinds of illumination: it seems to open books and ruffle pages in Augustine’s study, disclosing words and musical notation. The St. George is a grim display of virtuosity, as one of several bodies maimed and partly devoured by the dragon is presented in a foreshortening worthy of Andrea Mantegna.

Anglophone scholarship on Venice, on which this exhibition leans heavily, sees the city’s artists as having a horizon no wider than the city itself. Art mainly speaks of the materialism and corporatism of patricians and citizens. A master of light and perspective like Carpaccio is often seen in literal terms as a mirror to urban space and its ceremonial domination by elites. His artistic horizons, too, are supposedly circumscribed by senior painters like the Bellinis and by visitors like Dürer.

Italian scholarship, on the other hand, has been more willing to recognise his intense engagement with mainland contemporaries, positing a journey to Ancona with visits to artistic centres – Ferrara, Urbino – en route. The exhibition includes an exceptional drawing of female heads now in Oxford’s Ashmolean Museum, indicating first-hand knowledge of Perugino. Other likely points of contact are with the artists of Ferrara, and Mantegna’s work in Padua and Mantua.

Carpaccio (1465-1525) emulated the hard-edged, paper-like draperies of the Ferrarese painters, and his ensembles of bystander figures in turbans and ‘Greek’ costumes recall the orientalising figures in Roberti’s paintings and drawings. His uncanny geological formations, bearing figures and architecture, also speak of Mantegna’s Ovetari frescoes. The strangeness of these adaptations, which defy the narrative of Venetian art’s inevitable evolution towards the modernity of Giorgione and Titian, lies as much in the bath of pellucid light and air that vitalises his pictorial space. These fantasies are represented by the Ten Thousand Martyrs (1515) altarpiece and the astonishing The Meditation on the Passion (around 1494-96).

The smaller domestic paintings make less of an impression, with the exception of a lovely, somewhat archaising Virgin and Child with Sts. Cecilia and Ursula (around 1492), from a private collection, and a recently identified Pietà in the Alana Collection; it is hard to believe that the ungainly torso of the Christ in the Pietà from the Fondazione Magnani Rocca is by the same artist who painted the Christ in The Meditation on the Passion.

Carpaccio’s originality as a designer of altarpieces is fully on display. This has to do with more than the caprices of patrons; it is hard to imagine how any of them could put into words what Carpaccio achieves in the Ten Thousand Martyrs, for instance, or the 1514 single panel altarpiece for San Vidal in Venice.

For all the emphasis here on Carpaccio as a “storyteller”, two tendencies are apparent. First, that work is pervaded by an acute self-consciousness about what it is to make a sacred image and by constant allusions to forms of the icon and its antithesis: the idol (displaced in one case by St. Stephen preaching from a pedestal). Second, a sense that traditional distinctions between images for veneration and storytelling are breaking down, that the Venetian art market will sustain new artistic formats that override traditional functions. Altarpieces can stage religious history, while paintings like The Meditation can serve equally well as an altarpiece or a work for domestic display.

That self-consciousness reaches a climax in the Vision of Prior Francesco Ottobon (around 1513), painted for the church of Sant’Antonio in Castello, celebrating that prior’s 1511 vision of the Ten Thousand depicted here entering the church bearing the crosses and crowns of martyrdom. To the right of the rood screen appears a large pala (a single panel altarpiece) in a marble frame, often asserted to be none other than Carpaccio’s own altarpiece of the Martyrdom, which he produced for the same church. Yet this is not entirely convincing.

The altarpiece in the Vision evokes a populated landscape similar to that of the pala but through the pictorial idiom of painterly blots and smudges associated with the painting of Giorgione, who died three years before. It is a mark-making that invites projection by the viewer. But it is also capable of startling you into the realisation that the martyrs are no longer there: they have vacated the scene of their bloody annihilation and now, transfigured, populate the heavenly world of the monastery church.

What the other critics said

In the New York Times, Jason Farago praises the show as “a landmark undertaking, with […] several monuments of Venetian painting that I never expected to see this far from the lagoon.” Carpaccio comes across as “magnificently refined in his prime, sloppier in his later years. Plush, fanciful even, but always solemn.”

In the Washington Post, Philip Kennicott found the exhibition to be “a frustrating introduction to a painter who could be uneven.” While “each room in the exhibition, which includes some 75 paintings and drawings, contains something magnificent,” it is apparent that “when he worked with assistants, or for some reason when his inspiration wavered, Carpaccio made rather bland work.”