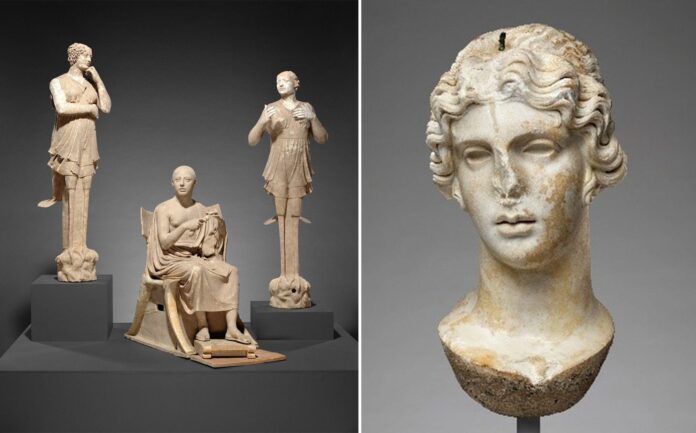 The J. Paul Getty Museum is returning several objects in its collection to Italy, their country of origin, after recent research determined they were stolen or illegally excavated. Chief among them is a group of life-size terracotta figures known as Orpheus and the Sirens, a work that dates to around 350 to 300 BCE and the only one of the objects that has been on public view in recent years. The museum, which made the announcement today (11 August), has removed the sculptures from view and is preparing them for transport to Rome in September.

“Thanks to information provided by Matthew Bogdanos and the Antiquities Trafficking Unit of the Manhattan District Attorney’s Office indicating the illegal excavation of Orpheus and the Sirens, we determined that these objects should be returned,” Timothy Potts, director of the Getty Museum, said in a statement.

Orpheus and the Sirens, which depicts a seated man flanked by two mythical Sirens, was purchased by J. Paul Getty in 1976, from Bank Leu, a now-defunct Swiss private bank. It is among the institution’s most well-known antiquities and had been on view at the Getty Villa since it was acquired, according to the Los Angeles Times. An entry from Getty’s diary notes that the billionaire and industrialist had purchased the sculptures for $550,000 on the recommendation of Jiří Frel, an archaeologist who was the institution’s antiquities curator between 1973 and 1986 and is credited with turning the museum into a leading centre for Greek and Roman art. Frel resigned in 1986 after it was revealed that he had built a tax manipulation scheme to expand the collection.

The figures, which were created in southern Italy, will join collections to be designated by Italy’s Ministry of Culture. According to the Getty, the group is likely to have once decorated a tomb. “Originally brightly painted, this large-scale sculptural ensemble is an exceptional example of the terracotta production that was characteristic of the Greek colonies in southern Italy,” the work’s record reads.

The museum is also working with the Ministry of Culture to arrange the return of four other objects at a date to be determined. These include three works acquired by J. Paul Getty in the 1970s: a second-century CE colossal marble head of a divinity, a second-century CE stone mould for casting pendants and an 1881 oil painting by Camillo Miola titled The Oracle. The fourth, a fourth-century BCE Etruscan bronze thymiaterion, was purchased in 1996.

The Getty has returned dozens of objects to Italy in recent years, but it has also resisted other calls for repatriation. Despite a 2018 ruling from Italy’s highest court that it must send back a bronze statue of a Victorious Youth, the museum has continued to claim ownership of it.

In March, a forensic archaeologist shared evidence that a mosaic fragment on display at the Getty Villa once belonged to a dealer known to traffic in stolen antiquities. The Getty has not commented on the implications of this evidence. A spokesperson told the Guardian: “Getty continually researches the background and provenance of items within its collection and considers new evidence when it is presented. We have a longstanding policy of returning objects to their country of origin or discovery when the research indicates it is warranted.”