Home News The Story Museum: a gateway to magical worlds for young readers—hidden in... 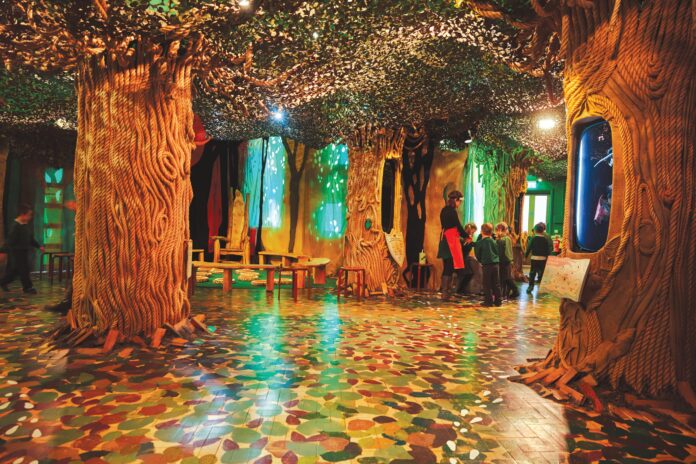 The Story Museum—the vision of founder Kim Pickin—began without a base, working for more than a decade with schools and libraries in and around Oxford to help improve literacy levels and encourage young people to engage with the written word. After receiving a series of donations and acquiring a former post office and telephone exchange on Pembroke Street, it was partially open to the public from 2014 to 2018, hosting events and temporary exhibitions. By the time a redevelopment—led by Purcell architects and designers Tom Piper and Alan Farlie—was complete, Covid hit. “During the early days we were adapting, and since then we’ve continued to adapt,” says Caroline Jones, the museum’s director. “We’re all about learning and growing, and I think that’s key to what we do and the way we do things. We’ll never stand still, because stories aren’t standing still, and neither are children.”

The museum is designed to surprise and delight visitors of all ages. For under-fives, there’s Small Worlds, a bright and cheery room inspired by picture books and nursery rhymes. Up a spiral staircase is the Whispering Wood, an indoor forest devoted to traditional oral tales from around the world; each talking tree tells a story and sets a challenge. Lined with the sort of wooden panels you might find in the Bodleian Libraries, a short walk away, the Enchanted Library invites audiences to slip between its shelves and experience key moments from eight remarkable stories. You’ll have the chance to play digital poohsticks in the Hundred Acre Wood and to climb through a wardrobe of fur coats into Narnia. (Keep an eye out for Mr Tumnus’s footprints in the snow.)

“For me, the most special thing is when I see a child leading a parent by the hand to go and show them something that they’ve either encountered on a school trip or heard whispers about,” says Jones. The Story Museum rewards curiosity and children are often more intrepid than adults when it comes to exploring. Throughout are layers of information, with visitors able to pick and choose what they engage with. There are soft toys and creative prompts, as well as plenty of books. Every installation has an element of game-playing. “We don’t have a lot of display cases,” adds Jones, “but the ones we do have are endlessly covered with little sticky handprints and nose prints, and that’s great.”

There are, of course, other centres involved in the art of storytelling, but what sets this one apart is that it is dedicated to gathering and sharing stories in all forms. “Our museum collection is almost entirely intangible—it’s about ideas—and for that reason we’ve got a rich playground and we can go anywhere we like with it,” says Jones. Involved in almost every decision are children and young people. “We’re continually curious about our audiences and our stories, and when you bring those two things together the creative possibilities are endless.”

What the museum looks like post-pandemic is yet to be seen—as Jones says, since the revamp, they haven’t hit a steady state. “I don’t think we would be complacent if we could be, but we can’t be because we’re still discovering it all,” she says. “Also, if we’re to achieve real inclusivity and relevance for the widest possible audience, we have to keep evolving.”

As for the £100,000 prize money, Jones says they would be very careful and considered about what they did with it. Whatever it was, it would have to reflect the creativity and resilience of both the team and the visitors. She pauses for a moment, and then she adds: “I have long wanted a dragon on the roof, and if it were made from solar panels that would be helpful for our sustainability goals. That’s the sort of flourish that we just can’t spend our core resources on, but to be able to commission a brilliant artist to work with the community to create an environmental sculpture would be very special.”

“One of the stories we feature in the Enchanted Library is Malorie Blackman’s novel Noughts and Crosses, and for several reasons I think it speaks to what the museum is trying to do. Malorie is a patron of the museum and an icon of children’s literature. We designed the space together with Kibwe Tavares, the designer of the TV adaptation, and in there is a weighted game of noughts and crosses: the crosses always win. I have seen all sorts of families in that space, each of whom brings a certain lived experience into the room and takes something away.”