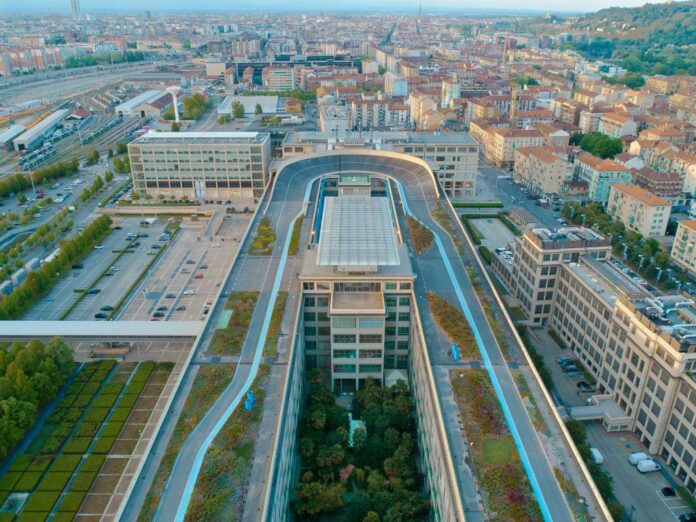 Before heading out to Turin last week, a U.S. collector offered me an unforgettable review of the city’s Artissima art fair: “It’s the only fair where you can trade art for truffles.”

The comment turns out to be more about attitude than actuality (though the prices are somewhat comparable, Italian truffles go for about $1,500 a pound), and though I did not see any knobbly fungi circulating the fair, I ate them elsewhere over handmade tagliatelle during my visit. What the collector meant is that, in Turin, food, wine, and art are parts of a whole, much more so than in other fair towns like Basel, Cologne, or even Madrid. This is Italy, after all.

The city of Turin, nestled as a posh base camp of the Italian Alps, is one of the country’s richer cities, and the region in and around it is a heartland of big industry and banking, as well as nobility. Among the companies with headquarters there are care manufacturers Fiat and Alfa Romeo, Italy’s largest bank Intesa Sanpaolo, and coffee brand Lavazza, to name a few.

Turin is also the old seat of the royal family of Italy, the House of Savoy, and this history lingers in the air along its parade-ready avenues. The fair’s VIP list, in turn, is clustered with deep-pocketed, cultured shareholders as well as some distant dynastic wealth, and, crucially, the eagle-eyed curators of these two sets’ various foundations. 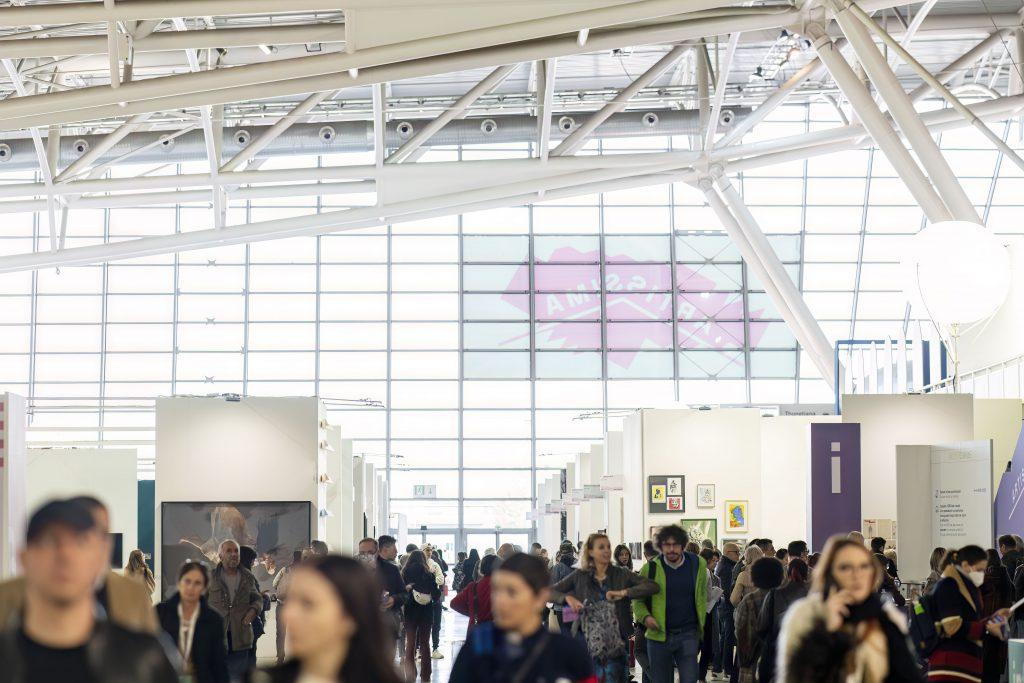 Some of these important people from the region dined together on Wednesday night, around white-clothed tables at Castello di Rivoli’s Michelin-starred restaurant. They were brought to the museum to celebrate the opening of Olafur Eliasson’s exhibition “Trembling Horizons.”

In the other wing, a maze of palace rooms contain the staggeringly precise Cerutti collection, as well as Beeple’s Human One, a digital sculpture of a walking astronaut, on loan from digital art collector Ryan Zurrer. It stands alongside Francis Bacon’s Study for Portrait IX (1956–57).

One Italian collector I ran into was sitting near the pair of works. “If the French had an inch of the taste and talent of the Italians…” he said, speaking of neither Bacon nor Beeple, whose work he did not care for in the least, but of the castle architecture itself that surrounded it. 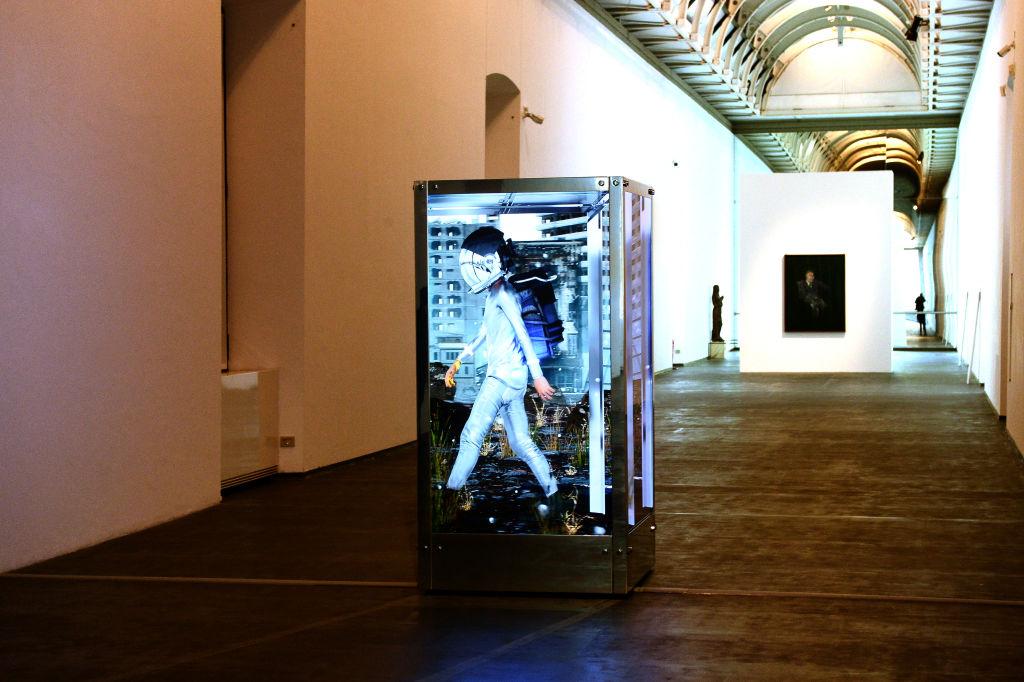 Anything that takes place in Turin is certainly imbued with a bit of aesthetic magic, because the sites and landscape of the city are so particular and historic. The late artist Carol Rama’s studio is here, on the top floor of a historic building, where she blocked off all the windows because Turin was too beautiful and distracting for her. It remains intact and, since her death in 2015, is open for tours.

To build his world at the Castelo di Rivoli, Eliasson also darkened some rooms in the museum’s tall and long Manica Lunga gallery, which has been broken up with kaleidoscopic sculptures that you can step inside. The wobbly light projections create an illusion (sort of) that the projections go beyond the walls of the room.

Though the Rivoli’s show seemed to be aiming for embodied sensation and immersion, it was less engaging the installation by U.S. artist Arthur Jafa at OGR Turin, housed in a late-19th-century steam engine repair facility, yet another testament to the old industrial power in Turin. Viewers sat on a large wedge of wood that trembled and vibrated under the weight of a booming soundscape accompanying an 85-minute video of a waving sea made up of computer-generated black rocks. The ocean of stones ebb and flow, rising at points to threaten to submerge the viewer before receding again, and the horizon returns.

The cinematic installation, conceived together with London’s Serpentine Galleries, was another brilliant manifestation of Jafa’s nuanced inquiry into Black identity through the avenues of visual archives and music. He described the abstract film work, a bold step away from his rapid-cut found-footage works, to the as “a [James] Turrell while chained to the bottom of a ship.” 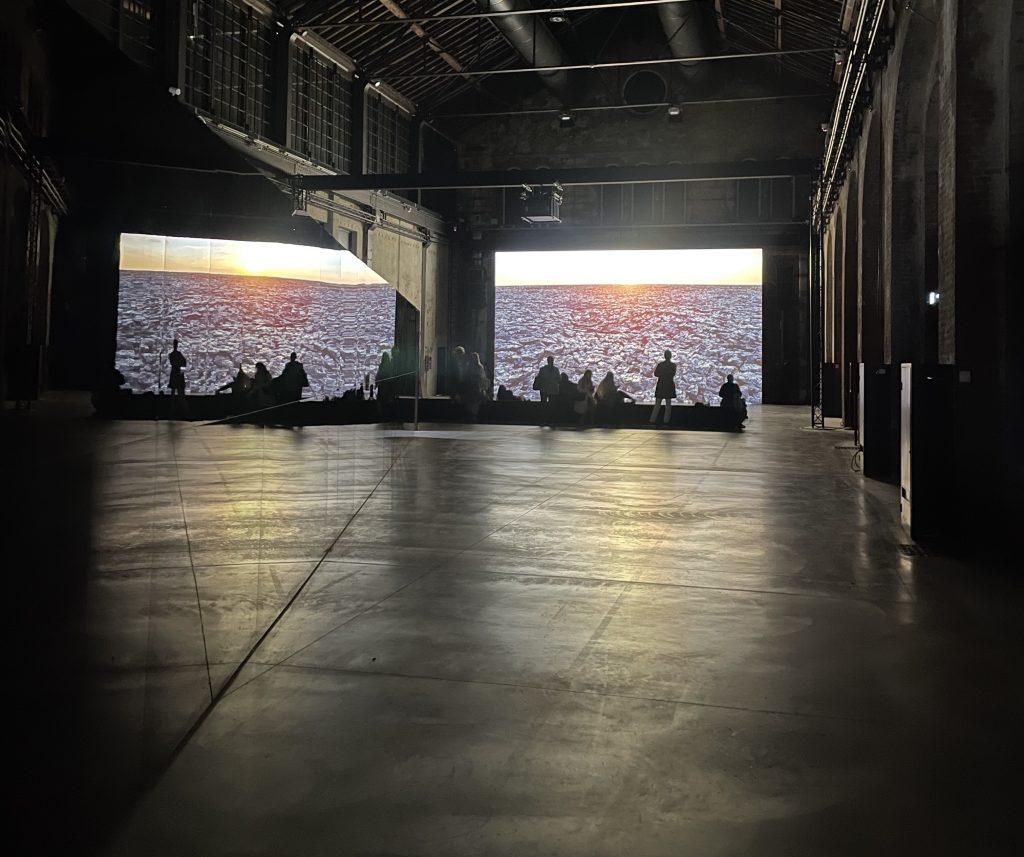 Meanwhile the art fair Artissima, around which all these high-budget openings were coordinated, is known for being ripe for fresh discoveries, a reputation that I found to be true.

It is hosted at the former Olympic sports arena from the 2006 winter games in Turin. And while there is a more collaborative spirit here, it was noticeably international, gathering 174 dealers with footholds in 27 countries. This is not a regional fair, either—Italian galleries are outnumbered by visitors.

Seven curators are involved in the fair’s selection of works or galleries in different capacities, which brings an array of positions. There is, for example, a curated section dedicated to drawing, and emerging art is at its core, not tucked in a back corner like many other fairs, but front and center. Artissima’s new director, Luigi Fassi, is also a curator. 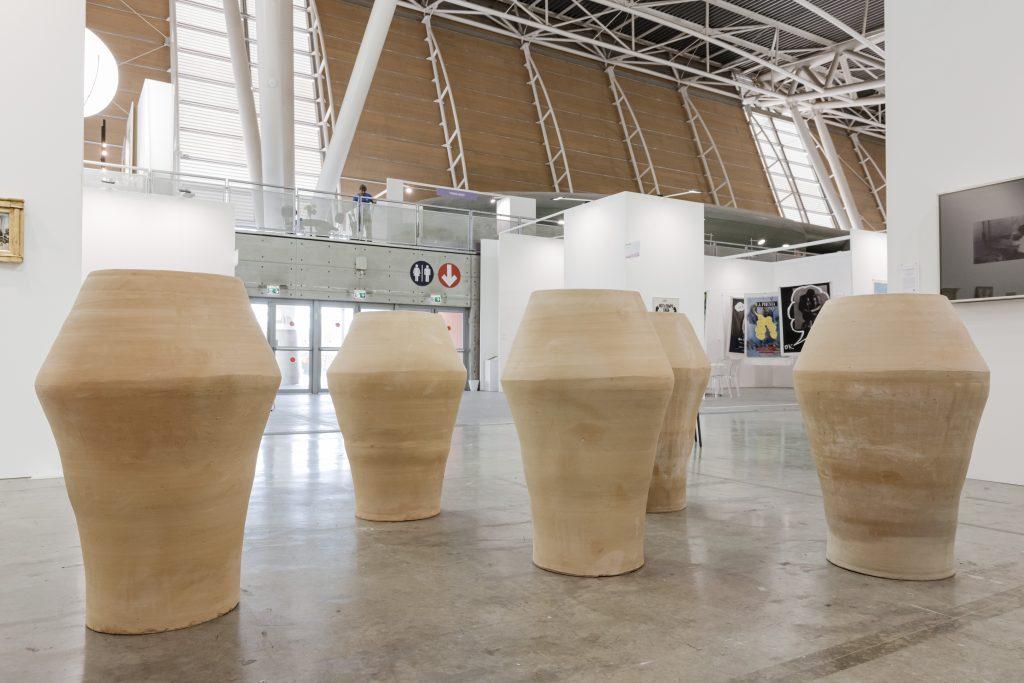 Delegations of institutions were omnipresent. “I hate art fairs, but I like Artissima,” one German museum director told me between sips of cold Barrolo wine. And while there is a nearly dizzying amount of different awards handed out across the four days of the fair, they are a good-natured effort to offer concrete engagement from the fair’s sponsors.

There was also a roll call of acquisitions: the Fondazione per l’Arte Moderna e Contemporanea CRT acquired 10 works; Castello di Rivoli bought a group of poignant sculptures—large reconstructed clay urns made with the ashes of burned olive trees by Rossella Biscotti—on view at Mor Charpentier; and work by Simone Forti, on view at Raffaela Cortesi, was among the work acquired by GAM – Galleria Civica d’Arte Moderna di Torino.

All in all, dealers seem pleased with the quality of the fair and the interest and engagement its visitors bring, not to mention a more intimate access to the Italian elite than one might experience at larger fairs like Art Basel. Though, as one dealer said, you might need to give a heavy discount for a work here, it is usually because what you are selling is entering a formidable public collection.

Foreign collectors were in town, including Frédéric de Goldschmidt and Alain Servais, among special attendees to Patrizia Sandretto re Rebaudengo’s annual dinner at her home, which included curator Hans Ulrich Obrist, artist Oscar Murillo, outgoing Art Basel global director Marc Spiegler, and Jafa. The artfully choreographed and sumptuous dinner is a staple hosted by the influential contemporary art patron, a cornerstone of Turin’s art scene. A testament to this is her foundation, which has a large display of Victor Man’s contemplative paintings and a new commission by Beirut artist Lawrence Abu Hamdan. At her home on the main floor, there is work by Avery Singer, Maurizio Cattelan, and Jana Euler; the house understandably has its own floor map available to visitors. 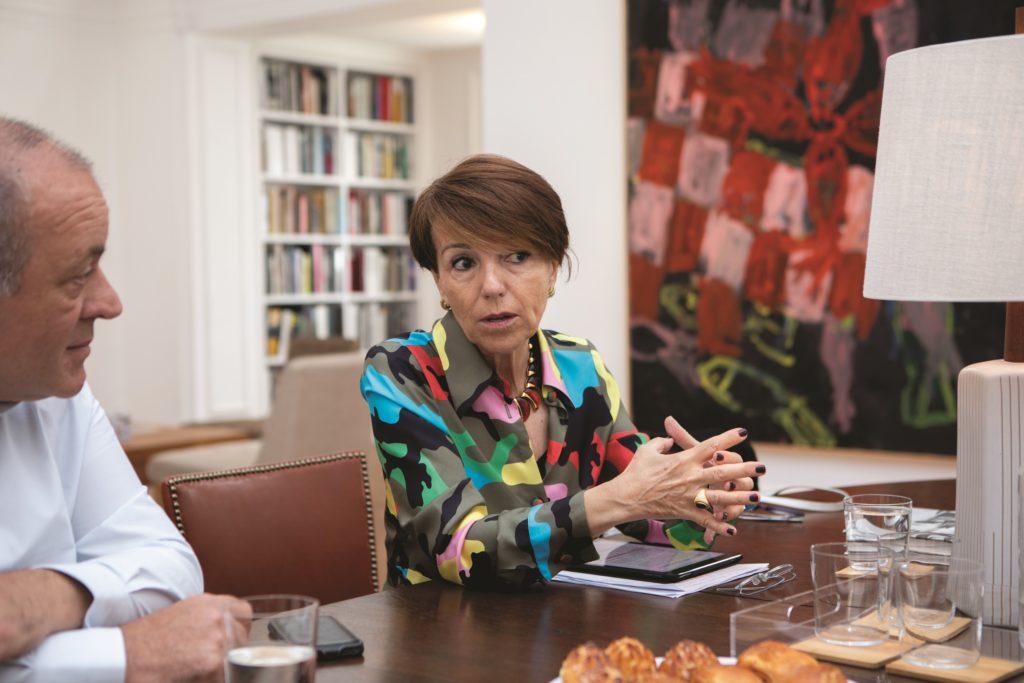 “I’m quite happy that my hometown fair, there is the right quantity of people,” Sandretto re Rebaudengo said, speaking in reference to Paris+ and Frieze, which were marred by overcrowded halls and long cues. “You can move around and speak with the galleries,” she noted.

That said, in Italy, much like everywhere else, the effects of the pandemic still linger, one of which is that the art world’s venues have experienced dips in attendance—and, in tandem, ticket revenue—as well as more precarious situations for funding. This is helped in no way by the war in Ukraine.

Just before Turin’s art week events began, over in Florence, the Uffizi director Eike Schmidt was forced to keep the museum closed over a public holiday due to cost-cutting around staff. After a prickly comment was received from the new culture secretary Gennaro Sangiuliano, Schmidt reminded his new boss that Italy’s museums need economic “reinforcements.” No one I spoke to in Turin is quite sure what exactly the new government, headed by a right-wing coalition, will mean for the cultural field, to say nothing of wider society. 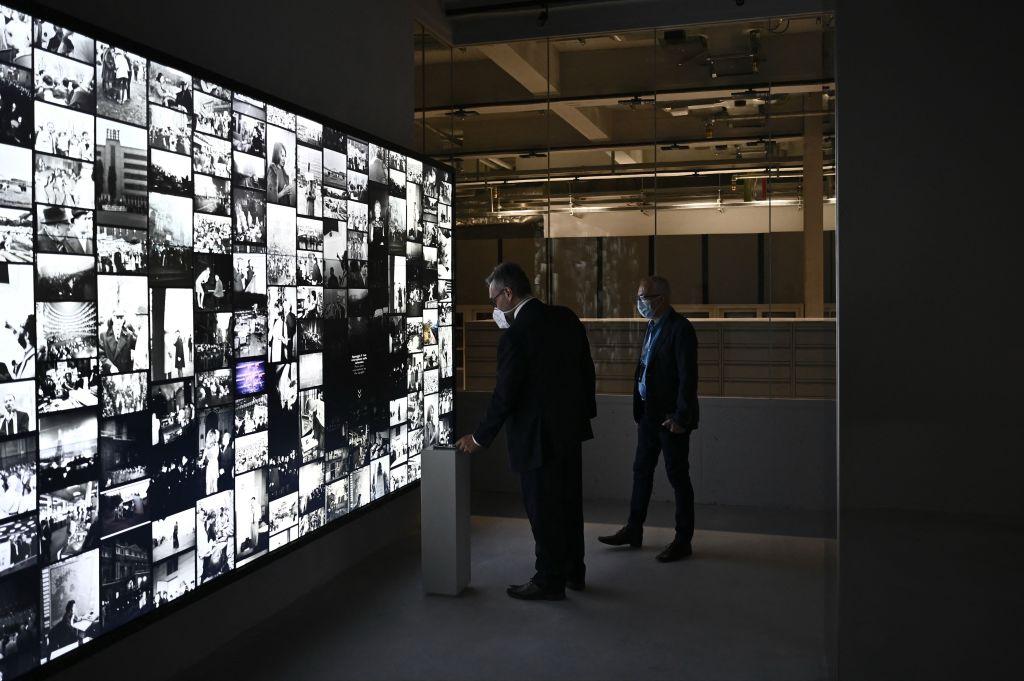 As such a junction, patrons like Sandretto re Rebaudengo are perhaps even more vital to the city’s art scene, as emblems of stability in times of flux. A museum curator from Turin emphasized this to me, saying that private money has helped them pull through the past few years and continue to organize ambitious shows. Artissima and Turin are especially well-equipped, not only because of the apparent high-net worth of the area, but because there is an ingrained spirit of working together, between the state, the art market, the institutions, and private companies.

Take for example, the banking group Intesa Sanpaolo’s new Gallerie d’Italia, its fourth museum, which opened this year and is focused on image-based media. The private collection also has a public mandate: during Artissima, film works by galleries participating in Artissima were on view at the Gallerie d’Italia.

“I really believe it is important to find ways to collaborate between all of us in Turin,” noted Sandretto re Rebaudengo as she poured over her map of Artissima and outlined her week of exhibition plans and prize-giving. “It’s the best way forward in this moment.”