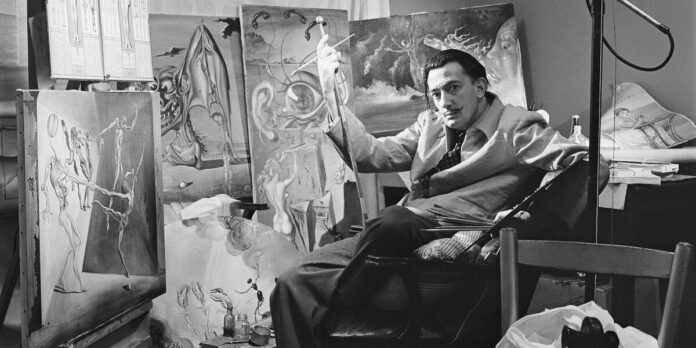 The popularity of the godfather of surrealism went far beyond artistic circles. The eccentric mustachioed genius conquered not only the world’s major museums, but also the world of fashion, cinema, and advertising. His paintings graced the covers of leading magazines. We invite you to get acquainted with the most interesting facts about Salvador Dali.

Dali’s covers have been published all over the world. In addition, he published the newspaper Dali News, dedicated entirely to his own person.

On the cover of the American GQ, Salvador Dali appeared in one of the autumn issues of 1963.

The Chupa Chups logo was designed by the artist in 1969. There is no more successful branding campaign in the history of the confectionery business.

Dali’s images are largely from his fantasies and dreams. It is not surprising that Alfred Hitchcock invited him to visualize the dreams of the main character of the film “Bewitched”.

One of the most interesting facts about Dali is that he painted a painting for the competition for the highest art award, never once touching the surface of the canvas with a brush. He splashed the competition subject onto the canvas from a distance of a meter – a work in the spirit of pointillism, painted with dots, eventually became the best.

Dali Raising the Surface of the Mediterranean was shown for the first time in an exhibition at the Guggenheim Museum in America. This is the artist’s first canvas in a series of stereoscopic paintings. After nuclear mysticism, the artist studied optics.

The fifties marked the beginning of a period of so-called nuclear mysticism in Dali’s work. It was a major change in Dali’s chosen course. Then he learned not only his dreams, but also tried to comprehend the world around him, decomposing it into the smallest particles.

In 1945, together with Walt Disney, Dali began creating the cartoon Destino. The artist made a complete storyboard of it, but it was not possible to finish what he started. The six-minute Destino was only released in 1999 by Disney’s nephew Roy.

In 1964, Dali created his own collection of women’s swimwear. It was real surrealism: intricately curved molten shapes wrapped around the bodies of the models so that the girls themselves seemed to have stepped down onto the podium from the artist’s paintings.

Dali turned out to be a real advertising genius. He advertised French chocolate, alka-seltzer, and even the American airline Braniff. In 1969, when Eurovision was held in Madrid, he made a poster for the competition.

Salvador Dali was an eccentric and multifaceted personality. It is impossible to describe all the interesting facts about Dali in one article. We have selected only a few of them. The life and work of Salvador Dali is worthy not only of a series of articles but a series of books.