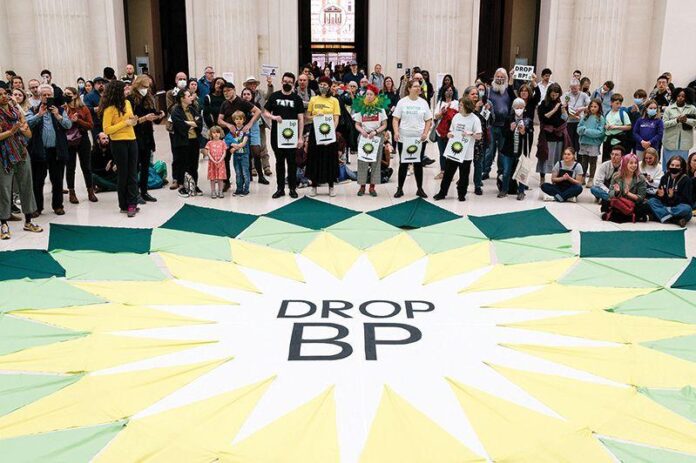 The British Museum felt the impact of climate change this summer. The 269-year-old institution was forced to close early for safety reasons during the July heatwave, which saw temperatures exceed 40°C for the first time in the United Kingdom. The heatwave sparked the country’s first ever red-level heat warning and the declaration of a national emergency. The irony was not lost on climate change campaigners, who continue to call on the British Museum to end its long-term sponsorship deal with British Petroleum (BP).

The oil giant directly sponsored the recent exhibition The World of Stonehenge at the British Museum, which closed in July, as well as Hieroglyphs: Unlocking Ancient Egypt, opening in October.

Financial records published in August showed that BP had tripled its profits to nearly £7bn in the second quarter of 2022, in part because of high oil prices created as a result of Russia’s invasion of Ukraine. The uncomfortable details entered the public domain just as the severity of rising energy costs became apparent to homes, businesses and institutions across the country.

The link between extreme weather and the burning of fossil fuels has never been clearer, says Friederike Otto, a senior lecturer in climate science at the Grantham Institute at Imperial College London. “Climate change is driving this heatwave, just as it is driving every heatwave and drought around the world right now,” he says.

With public concern around the issue growing—the latest Ipsos poll showed 84% of British citizens are concerned about climate change—the pressure is rising on cultural institutions such as the British Museum to stop taking money from fossil fuel companies.

Chris Garrard, the co-director of the Culture Unstained activist group, which campaigns to end oil sponsorship of the arts, said: “By sponsoring exhibitions and art prizes, corporations like BP try to normalise their brand. They almost become part of the artwork and the culture itself. It burnishes their social licence.”

But museum sponsorship is not just an exercise in art washing, Garrard says. He claims that BP will be using their relationship with the British Museum to develop relationships with influential figures in government. “For fossil fuel companies like BP, sponsoring the arts is a key part of their lobbying strategy,” he says. “Behind the scenes, it allows them to use these spaces to hold meetings and rub shoulders with government ministers.”

In 2009, Garrard notes, the British Museum hosted a series of events marking the Mexican Day of the Dead festival, funded and sponsored by BP. “It gave BP executives the opportunity to sip champagne with Mexican government officials,” he says. “A few months later, BP got new licences to drill for oil in the Gulf of Mexico. The museum says they don’t support the company’s activities. In fact, they are almost complicit in the act of getting more fossil fuels out of the ground.”

Garrard alleges there is a “revolving door” of corporate influence on the boards of cultural institutions. “The former UK chancellor George Osborne is chair of the British Museum, but he is also a partner at the investment bank Robey Warshaw” he said. “One of Robey Warshaw’s clients’ is BP.”

How much is the sponsorship worth?

Although the British Museum refused to reveal how much the sponsorship is worth, the campaign group BP or not BP? has calculated that the funding provided is just 0.3% of the museum’s annual income. In 2016, BP announced a five-year-deal worth £7.5m to fund four cultural institutions in the UK: the National Portrait Gallery, the Royal Opera House, the Royal Shakespeare Company and the British Museum. If spread equally between the four, this would equate to £375,000 a year for the British Museum.

The call to end links with fossil fuels has also come from employees, who were among those most affected by the working conditions during
the heatwave.

Gareth Spencer, president of the PCS Culture Group, a trade union which represents 4,000 staff at UK cultural institutions, said it was galling to see the museum close due to climate change while simultaneously helping promote companies who directly contribute to the crisis. “We’ve been against fossil fuel sponsorship for over a decade,” he says. “At our conference in May, a unanimous motion was passed which called for them to end.”

Other UK cultural institutions have recently ended their fossil fuel sponsorship deals. In May, the National Portrait Gallery and Scottish Ballet announced BP sponsorship was ending. The Tate stopped taking oil money in 2017, while in 2019 the Royal Shakespeare Company cancelled ties to BP just two years into a five-year deal. The Southbank Centre, British Film Institute and National Theatre all ended their sponsorship deal with Shell in 2020.

“The tide is turning,” Spencer says. “The institutions that dropped oil sponsorship did so because they got wise to public opinion. They realised their customers prefer not to be associated with fossil fuel companies. The PR is only going to get worse for those who continue to endorse fossil fuels.”

The Hieroglyphs exhibition at the British Museum marks the last exhibition in BP’s existing sponsorship deal with the institution. The museum’s leadership is now faced with a decision; to renew the deal for another cycle, or seek sponsorship elsewhere.

“The British Museum now has the perfect opportunity to get out of the oil business,” Garrard says.

In response for a request for comment on its sponsorship arrangement with BP, the organisation said: “The British Museum has been open for over 250 years. Our role is to tell the stories of the world and every year we welcome millions of visitors, free of charge. The British Museum receives funding from BP, along with a number of other corporate supporters, to advance the Museum’s mission, providing public benefit for a global audience. Without external support, much programming and other major projects would not happen. The British Museum is grateful to all those who support its work. The Director and Trustees think carefully about the nature and quality of sponsorship before accepting.”