Home News This Masterpiece of Polish Symbolism Was Expected to Be the Priciest Painting... 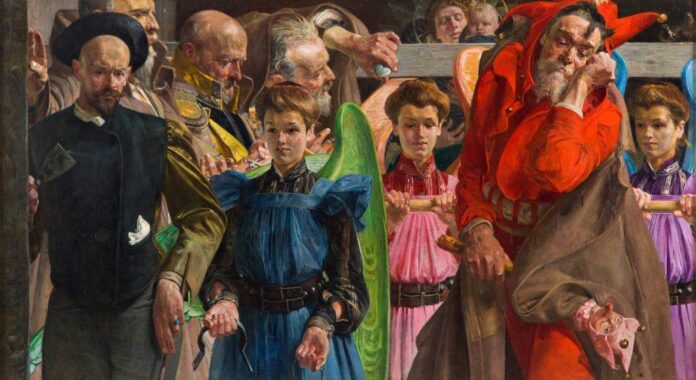 On Monday, police in Poland were thwarted in seizing a disputed painting from a Warsaw auction house, for the second time in two weeks. In both cases, authorities left empty handed after they failed to bring the proper materials to safely pack and transport the important artwork.

Reality (1908) by Jacek Malczewski, which currently held by the auction house DESA Unicum, is the target of authorities who believe it was stolen from the country in the 1950s. The work was expected to become the most expensive artwork ever sold in Poland with an estimate of PLN 14-22 million ($3.1-4.9 million).

Malczewski’s canvas was last seen by the public during an exhibition in Lviv, Ukraine in 1926. After this, it fell into private hands and its whereabouts became unknown—until it showed up on a German auction website last year and was acquired by DESA Unicum.

The work’s provenance came under scrutiny by Poland’s Ministry of Culture, which began to suspect it may have been involved in a crime. In February, the agency asked for more info about the work from the auction house. It also undertook its own research into the matter.

According to a report in the English-language Polish publication First News, DESA Unicum responded by claiming that before World War II the work had been owned by a Polish-German family whose members took it with them when they moved to Germany in the 1950s.

This explanation for how the painting ended up in Germany did not do enough to allay concerns, and the ministry filed a notice with law enforcement back in March. In a statement published online, it said it was acting because of “the existence of serious premises justifying the suspicion that the painting was an object of a crime.”

The auction house was undeterred, and went ahead with preparations for the big sale.

The police first attempted to intervene and confiscate the work on November 21, but were told by staff at DESA Unicum that their packing materials were inadequate to take the work away. A week later, on November 28, they were once again unable to remove the work because their transportation box was apparently the wrong size. It had been built to accommodate both the canvas and its frame, which the auction house intended to keep.

“Despite our request, we have not received confirmation that the painting is insured either in transit or in storage,” DESA Unicum’s president Juliusz Windorbski told First News, elaborating on the reasons for which the auction house has so far refused to part with the painting. His colleague Marta Wiśniewska added that DESA Unicum has applied to the public prosecutor’s office to allow it to hold the painting while the situation is resolved.