Home News Through Beauty and Pain, the 2022 Busan Biennale Flexes the Strength of... 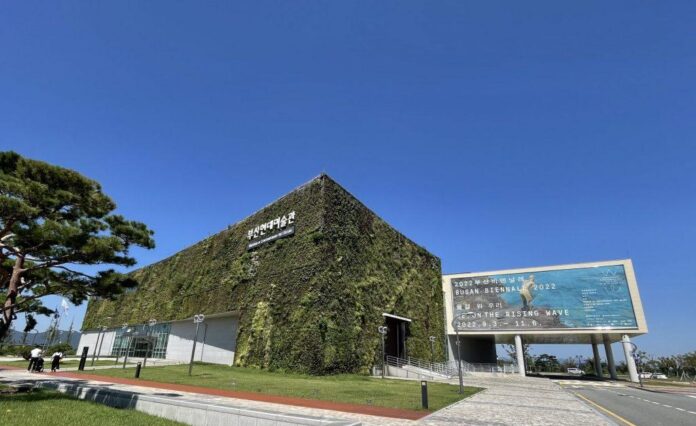 The brilliant sunlight was beaming through Mire Lee’s installation on Yeongdo Island. Titled (2022), the 70-foot-tall work made of fence fabric draped across scaffolding is on show as part of this year’s Busan Biennale. The roofless abandoned factory of Song Kang Heavy Industrial, where the work was installed, allowed it to stand under a cloudless blue sky.

A tranquil moment of art appreciation was disrupted, however, when exhibition staffers guided the tour group Artnet News was part of to walk away from the structure—for safety reasons. The glorious weather had already made us forget about Typhoon Hinnamnor, which had struck South Korea’s hilly coastal city of Busan just the day before our visit. The powerful tropical cyclone had devastated the southern part of the country and killed at least 10 people.

But the monumental installation by the Amsterdam-based South Korean artist was still standing strong after the raging storm, albeit a little shaky and slightly damaged. It felt like a symbolic gesture that echoed the theme of this year’s Busan Biennale: “We, on the Rising Wave.”

In this case, “rising wave” signifies the history and transformation of Busan, which was the country’s first port open to foreigners in 1876 and a safe haven for over 1 million refugees during the Korean War in 1950–53. And “we,”—be it the participating artists, art practitioners, audiences, or even the city—are still standing despite such rising waves of endless change, locally and abroad. Just like Lee’s work. 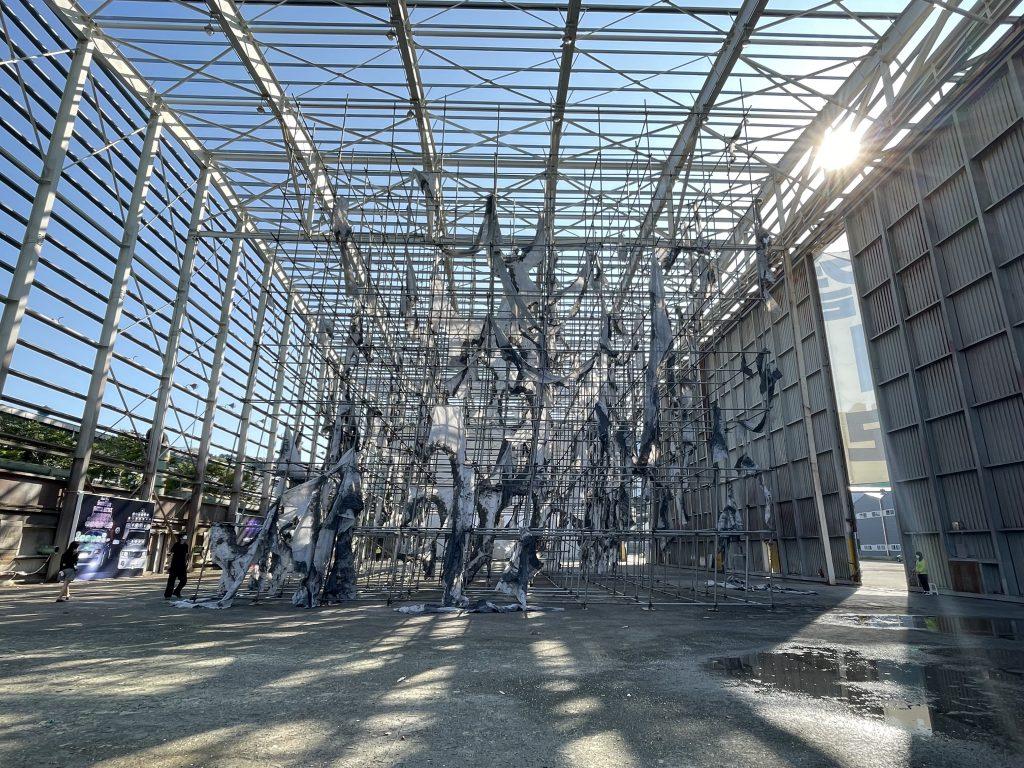 Still standing after Typhoon Hinnamnor: Mire Lee, Landscape with Many Holes: Skins of Yeongdong Sea(2022). Photo: Vivienne Chow. An image of the work’s original state is at the bottom of this article.

“This is the story of Busan,” Haeju Kim, the artistic director of Busan Biennale 2022, told Artnet News. Taking the helm of the biennale this year offered an extra layer of meaning to Kim, who was born and raised in the city. During her research to prepare for the show, she dived deep into the local histories of her hometown, covering how the city was built and how it has evolved since local elections resumed in 1991, after democracy was fully installed in South Korea in 1987.

“This gives me a chance to take a good look at my city, what it means to me as an individual, and as an art practitioner from here,” noted the curator. “Busan, as a port city, is a starting point for this exhibition. From here, we look for the connection, a common ground for discussion with artists from different parts of the world.”

It was indeed refreshing to visit the Busan Biennale following a week of frenzy surrounding Frieze Seoul, launched in partnership with Korea’s long-running homegrown fair Kiaf Seoul. All the glamorous parties, openings, and multimillion-dollar sales had undoubtedly made Seoul an exciting place to be, but the tranquility of Busan was where one could let art sink in.

Such tranquility may or may not have been welcomed by the organizers, however, since the opening of this year’s biennale fell on the same date as the opening of Frieze Seoul and Kiaf, and many trips to Busan were postponed or canceled due to the typhoon.

The biennale was founded in 1999, and as the host of one of South Korea’s most notable international art exhibitions, the city of Busan has been playing a tremendous role in not just the organization but also the narrative of the show. The support was rounded out by this year’s curatorial advisors, Christine Tohme, Philippe Pirotte, and Yuk Hui.

The show spans four different locations that carry specific meanings to the city’s transformation. The Museum of Contemporary Art Busan (MOCA Busan), which has been a main exhibition venue since the museum’s inception in 2018, is located on Eulsukdo Island, which was once Asia’s largest habitat for migratory birds, but the environment was severely damaged because of accelerated industrialization and urbanization. Pier 1 of Busan Port, which was completed in 1912, was the transportation hub during Japan’s invasion of China and the Korean War, but was excluded from the city’s current North Port redevelopment project. And the other two locations, Yeongdo and Choryang, played significant roles during the Korean War, since both were homes to refugees.

According to artistic director Kim, exhibition locations—as well as the artists—were selected to address the exhibition’s four thematic focuses: “Migration,” “Women and Women Laborers,” “Ecosystem of the City,” and “Technological Change and Locality.”

“There were some personal factors when I decided to look at Busan through the lens of these four focuses,” Kim noted. “Many people, for example, have already forgotten how the population of Busan was made of migration. A lot of mixed recipes can be found in the local food culture. The city is mountainous but it was quickly occupied by migrants and houses were built along the hilly landscape.”

Although the majority of featured artists were based abroad, Kim hoped that by having Busan as a point of departure in the exhibition and in her discussion with artists, would allow a “more relevant identity of Busan under a larger context to be rebuilt.” 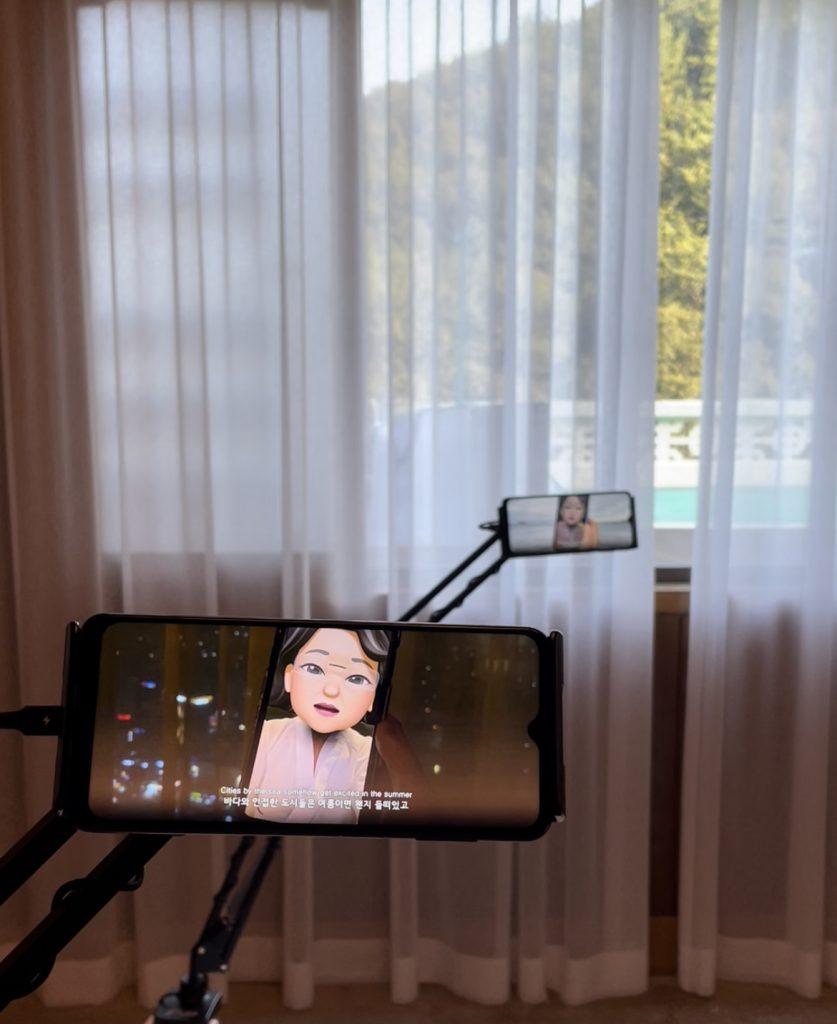 Four Themes in One

Despite the biennial’s four distinctive focuses, there are no separations or any obvious boundaries drawn among the works. Rather, they are all laid out in a lyrical and sometimes poetic way, as if they were in dialogue with each other, telling stories that are related across time and space. Different images are juxtaposed alongside each other, addressing more than one focus at the same time.

Indeed, these four focuses should not be isolated from each other. The memorable exhibition at MOCA Busan’s basement level space, for example, is a thoughtfully curated journey that begins with rarely seen paintings from the 1990s to 2000s by the Korean artist Oh U-Am (b. 1938). He was orphaned during the Korean War and painted the seemingly childlike yet somber images out of his childhood memories of the country’s liberation from Japanese imperial rule, and people’s suffering in the aftermath of the Korean War.

This is followed by a journey through works that attempt to revive the memories of a forgotten past. Danish artist Pia Rönicke (b. 1974) tells the story of Le Klint, a woman who made the famous pleated lamp shades in installation set (2004–07), but never received the credit for it. (Rönicke has another brilliant work, that tells the history of military conflicts in the region through the stories of plants showing on the museum’s first floor.)

Korean-Dutch Sara Sejin Chang (b. 1977) recounts the painful history of transnational and transracial adoption of Korean children, who were sold and transported to other countries—with Busan serving as an epicenter of child traffickers in the 1970s and 80s—in the film installation (2020).

French artist Laure Prouvost (b. 1978) reminds us of our watery origins from a mother’s womb in her 2022 video work which is accessed through a mysterious tunnel of palm trees made with leaves from Jeju Island.

The basement level exhibition concluded at South Korean artist Kim Jooyoung’s (b. 1948) (1994), a notable work hanging on the wall that was essentially a pathway for lost souls made by footsteps in black ink left on a white cotton cloth. The piece is an apt representation of her practice, revolving around the themes of departure and stemmed from her growing up during the division of the Korean peninsula. A similar theme is explored in her stunning recent work (2022), on show at Pier 1 of Busan Port. 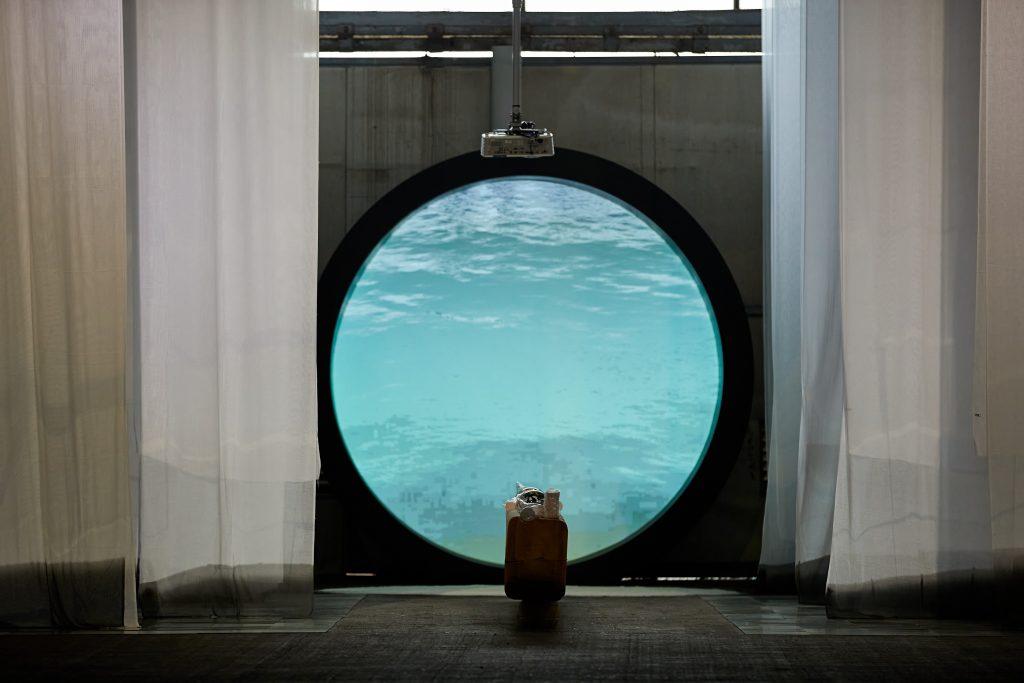 Off the Beaten Track

Of the four locations, the abandoned house up on the hill of Choryang that was turned into a temporary exhibition space is a must-go experience for adventurous art lovers. The Busan-born South Korean artist Song Minjung’s (b. 1985) transformed the site into quirky show. (It is also fortunate that the typhoon did not seem to have caused a great deal of damage to the two-storey building.) Her work follows a mysterious story told via various video clips shown on different smartphones, as if the fictional characters are video-calling each other.

The exhibition location, from which visitors can enjoy a great view of the city, was an experiment as it was new to the biennale, and Song’s work explored the uneasy dynamics of the relationship between Korea and Japan inherited from a problematic historical past.

The relationship between Korea and Japan was given a more positive note by the Japanese art collective Chim↑Pom from Smappa!Group, who invented a new beverage called “Doburokgeolli,” which was designated the official alcoholic drink of this year’s Busan Biennale. Free bottles of the mysterious dark beverage, held in a fridge housed in a hut in Yeongdo, were the outcome of an experiment. They were made with Japan’s technique of brewing Doburoku sake with the malt of Geumjeongsanseong Makgeolli, a traditional alcohol from Busan.

The artists argue that the two alcoholic drinks share a lot of similarities, including a crackdown on home-brewing by their respective countries’ governments. The creation of this new hybrid drink is meat to carry a symbolic meaning of how the relationship between these two cultural powerhouses of east Asia could move forward from their troubled history. 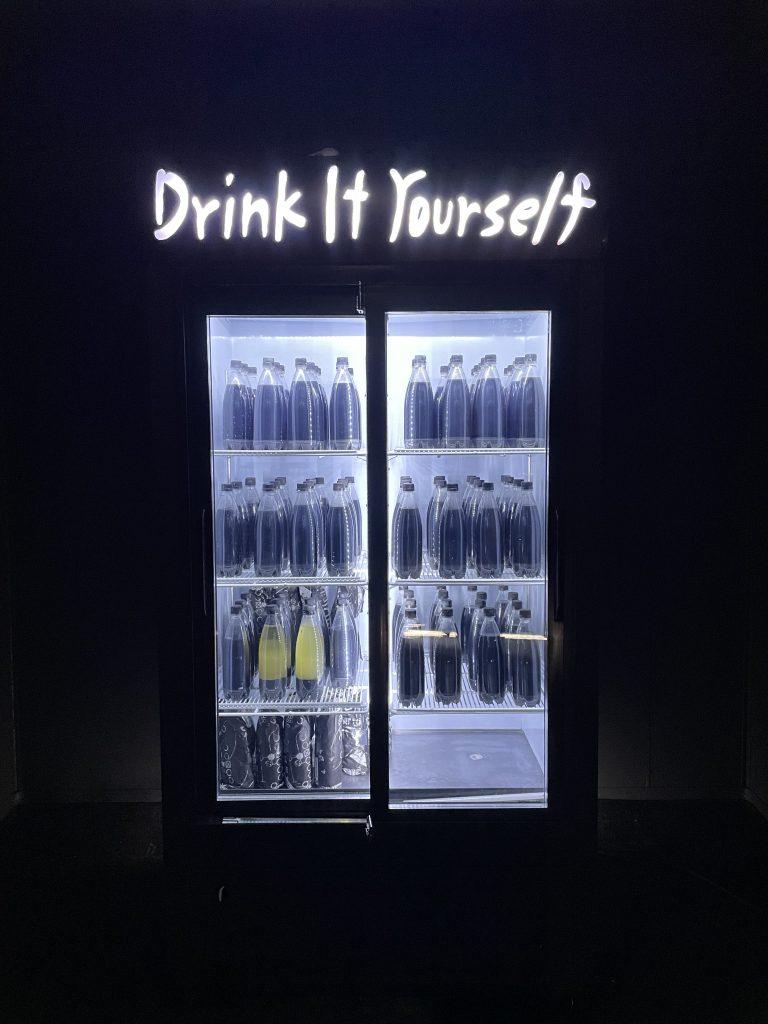 Like the work by Chim↑Pom, artistic director Kim has a lot of hope for the future, particularly for her hometown.

“Busan deserves more attention, not just in Korea but also internationally,” Kim said. “Most of the global attention centers around Seoul, but Busan is getting better, and becoming a city that inspires artists.” 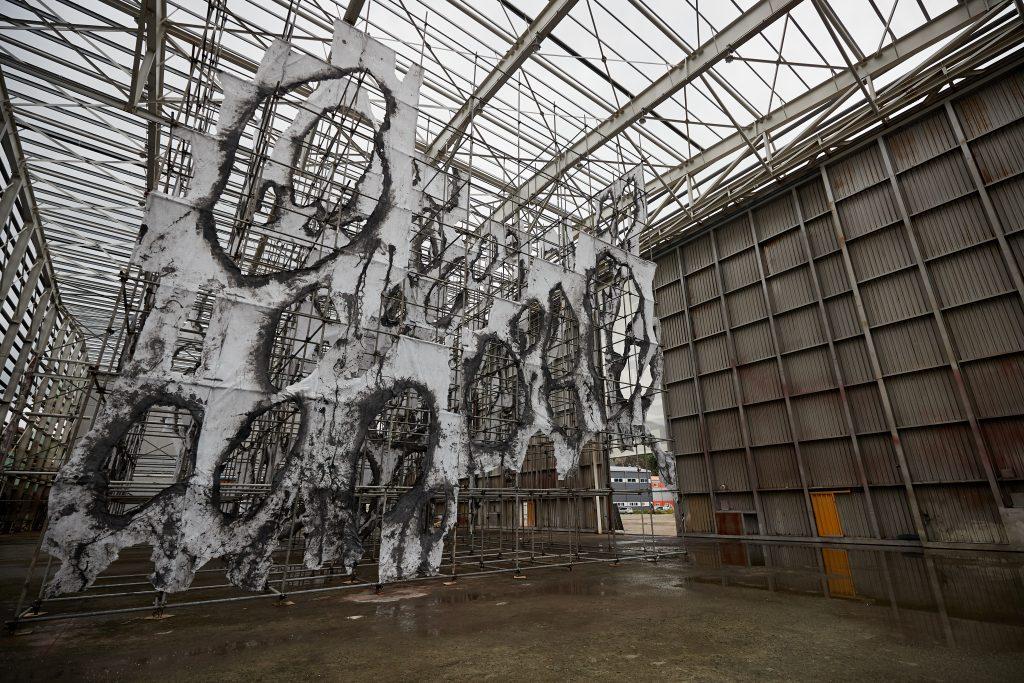 How it looked originally: Mire Lee, Landscape with Many Holes: Skins of Yeongdong Sea (2022). Courtesy of the artist and Busan Biennale.

The Art Angle Podcast: 4 Predictions on How the Art Industry Will Transform in 2023