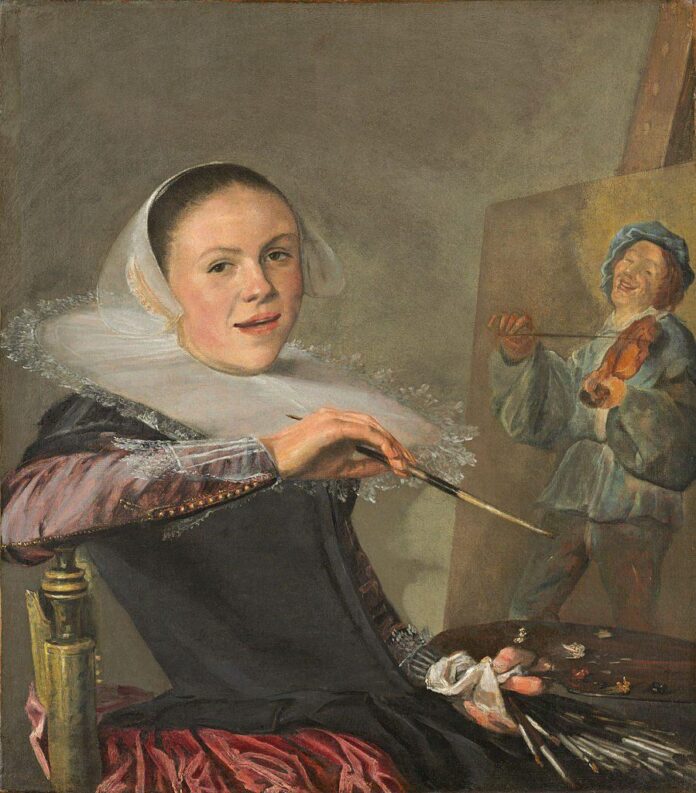 Google’s illustrated tribute riffs off Leyster’s now-famous self-portrait, which belongs to the National Gallery of Art in Washington, D.C. It is not on view.

Leyster was born in Haarlem on July 28, 1609. Not much is on record of her origins, but the poet Samuel Ampzing did encounter her work on a 1628 trip to the city and called the then-19-year-old an artist of “good and keen insight.” By the time she was 24, Leyster would become one of only two women admitted to Haarlem’s selective painters guild in the 17th-century, four years after finishing her first known painting.

Style-wise, she’s best known for translating the era’s dramatic tenebrist genre and portraiture traditions through spontaneous brushstrokes balancing realism with mirth. She ran her own studio, with students and assistants.

It was while overseeing her own studio that Leyster once filed a complaint against Frans Hals for poaching her assistant, a Willem Woutersz, forcing one of the most well-known artists in Haarlem to pay a fine.

Leyster’s association with Hals might have also run deeper. The jury’s still out on whether Leyster actually trained with Hals, or if she just incorporated elements of his paintings into her own. Experts do know, however, that she married artist Jan Miense Moleanaer in 1636, and relinquished her practice for motherhood.

The paintings she left behind after her death in 1660 were either unattributed or credited to her husband or Hals. But in 1893, a Louvre visitor observing a work attributed to Frans Hals titled The Happy Couple (1893) noticed a star by the signature that didn’t jive with Hals’s hand.

Google is featuring Leyster’s work today to commemorate the 13th anniversary of two exhibitions at the National Gallery of Art and the Frans Hals Museum that clarified and reestablished her legacy. But Leyster is posthumously closing a landmark 2022.

In March 2021, she debuted alongside Gesina ter Borch and Rachel Ruysch as the first female artists on view at the Rijksmuseum. As 2022 began, the MFA Boston unveiled Ruysch and Leyster amongst their expanded Dutch and Flemish galleries. Then, this May, Leyster shattered her own auction record with Christie’s, when an unnamed painting tentatively attributed to her monumentally shattered its estimate. You can find her paintings on view at the National Gallery in London, the Currier Museum of Art in New Hampshire, and the Philadelphia Museum of Art, among others.

Spotlight: An Exhibition of LGBTQIA+ Artists Testifies to the Art Students League’s History as an Incubator for Radical Talent