Home News The Back Room: A Taste of the Future 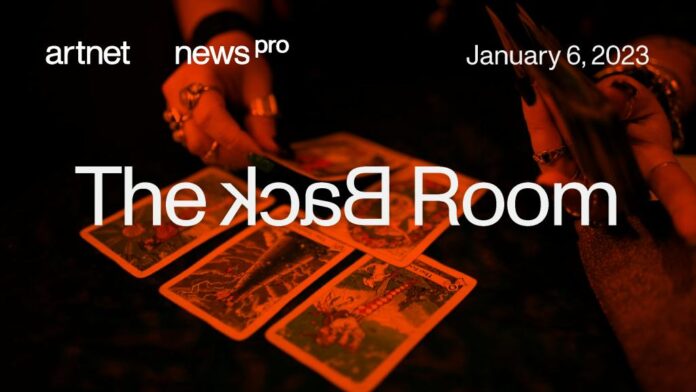 This week in the Back Room: a 2023 predictions sampler, Singapore’s star turn begins, a Hollywood insider banks on an art-world outsider, and much more—all in a 7-minute read (1,901 words). 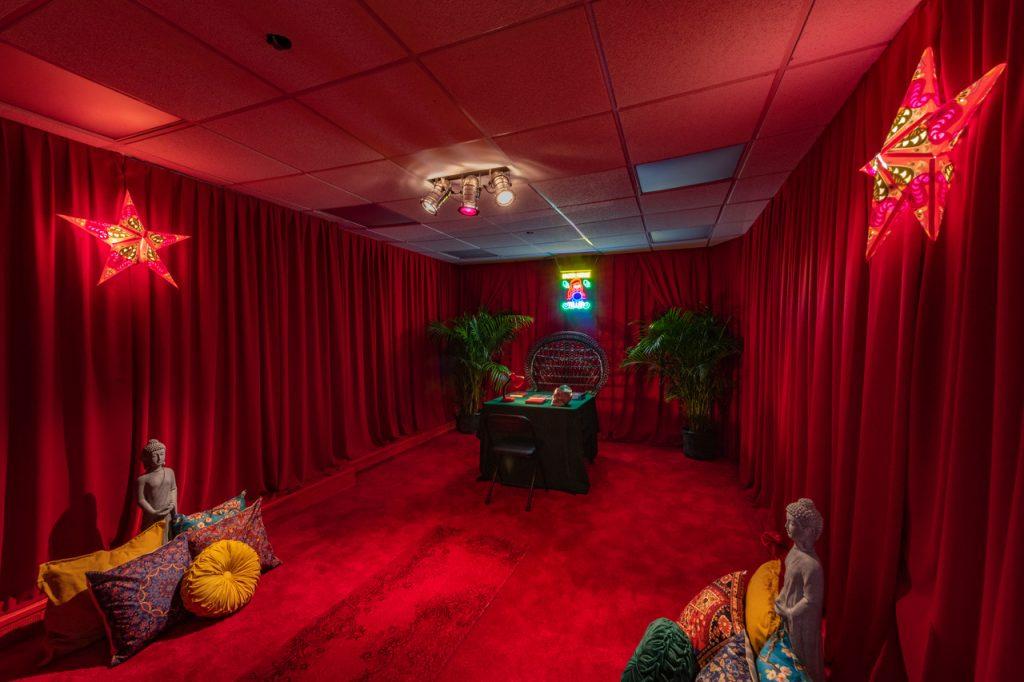 Happy new year, everyone, on the last day I’m deploying that greeting!

Tim here. As the art industry staggers back to its feet to face 2023, we’re devoting this space to my annual predictions, which are all designed to be objectively, definitively provable true or false by mid-December. Then, as always, I’ll use my last column of the year to grade my foresight.

I made eight total predictions this time out (and went 5.5 for 10 on my 2022 batch). To whet your appetite and fire up your synapses, below are abbreviated versions of three of the newbies: one each for the gallery, auction, and fair sectors…

1. One or more high-end galleries will build out a department specializing in licensing and branded merchandise.

One of the fastest-growing segments of the art economy over the past 10 years has been licensing deals for artists and estates, with artist-branded merch being the most frequent outcome.

Many, if not most, premier-league dealers now operate the equivalent of museum gift stores. (Gagosian opened its second standalone shop in London last year.) The Jean-Michel Basquiat estate runs a merch empire that offered everything from $3 postcards to $75 alpaca blankets to $1,300 Coach bags at its “King Pleasure” exhibition in New York last year. Artists are becoming muses to, and collaborators with, more and more of fashion’s brightest names every year.

And yet, it’s possible that galleries are falling behind in the licensing race. The Basquiat estate works with an independent advisor on this front. My colleague Katya Kazakina has reported that the Warhol Foundation and the Artists Rights Society both maintain multi-person licensing departments. The three largest entertainment agencies (CAA, Endeavor, and UTA) all employ specialists who work with contemporary artists on transmedia opportunities and licensing deals.

Major galleries have spent years slowly bulking up to become 360-degree art services platforms. How much longer are they going to keep letting some of their most bankable artists make high-dollar, high-visibility licensing decisions based on expertise from outside their organization? I think at least one dealer will fix this leak in 2023.

2. From January through June, total auction sales of works by ultra-contemporary artists (born in 1975 or later) will decline year-over-year for the first time since 2019.

The good macroeconomic news is that U.S. inflation—even though it’s still high—is de-escalating somewhat. But a big part of the reason it’s de-escalating is that interest rates are the highest they’ve been in decades. Worse, the Fed is saber-rattling about continuing to hike rates in the coming months, a sharp reversal from when it openly assured Americans that it would keep rates at or near zero from 2010 until last year.

The change is good on paper if you’re holding art. High interest rates mean investable assets of all kinds become more expensive, which means anyone who already owns them is theoretically getting richer.

But it’s not so good if you want to sell what I’ll call art, or works by hot (usually) young artists whose resale prices rose scary fast during the last bull market because of blue-chip expectations and/or the “greater fool” theory.

I think the importance of low- or no-cost loans has generally been underrated when it comes to fueling the market for art, period, but especially for speculation-grade art at auction. The new interest-rate environment should be the ice bath for overheated assets that cooler heads have been waiting for across economic sectors.

3. FIAC will permanently shut down.

It’s been awfully quiet at RX France, FIAC’s parent company, since the warm welcome given to Paris+ in FIAC’s former venue and time slot last October—and that’s even if you set aside the healthy sales and positive reviews from the usual art-market insiders.

President Emmanuel Macron, culture minister Rima Abdul Malak, Louvre director Laurence des Cars, and more all joined in the festivities. That had to feel like a body blow to officials at RX France, whose best hope to salvage the homegrown FIAC after its sudden eviction by a Swiss company was the support of its countrymen.

Sheer numbers are against FIAC, too. The first hastily organized Paris+ hosted 156 exhibitors. It’s common for that number to rise by 10 to 15 percent in the second edition of any new expo.

The scrappier but well regarded Paris Internationale fair hosted another 60 dealers the same week. Together, then, the two fairs will probably draw some 230 exhibitors spanning the emerging to high-end tiers in 2023.

Will there be enough other quality galleries to justify FIAC’s return in a year likely to be defined by cost-cutting? I get no joy from saying that I doubt it.

Nor was it encouraging when, rather than hiring or elevating a full-time director to chart FIAC’s future, RX France simply tasked the director of its other fair brand, Paris Photo, with running both events almost a year ago. It’s even less encouraging in retrospect now that we know FIAC didn’t happen at all in 2022.

If it’s AWOL this year, too, I don’t think it’s coming back.

By and large, this year’s predictions turn on my expectation that the art space is headed for further breakdowns: of some of the last walls separating the primary, secondary, and mass markets; of the social compact between museums and their publics; of the protected status Big Tech has enjoyed while raiding artists’ work as raw material; and more.

There’s no doubt that I’ve misread the velocity of at least a few of these trend lines. But I’m confident that the underlying tensions they spring from will be major factors in determining the shape of the industry over the next 12 months.

And if I’m wrong, at least by now you know I won’t run from it.

While your trusty Wet Paint scribe recovers from a non-COVID illness, catch up on the December 22 column for the backstory behind Cheim and Read’s… um, unexpected decision to devote a solo show to an extremely online 26-year old painter who goes by the moniker Cumwizard69420.

If that weren’t enough, you can also find details on the dissolution of Tribeca’s Denny Dimin Gallery, whose two namesakes will now helm separate spaces.Here’s what else made a mark around the industry since the last Back Room…

“As long as you’re getting fed by artists… you want to stay with them.”

—the late American dealer Ronald Feldman, speaking on a core tenet of gallery strategy during a 2010 interview. Feldman, who gave early shows to conceptual artists including Joseph Beuys, Chris Burden, and Hannah Wilke, died of Alzheimer’s disease on December 20. () 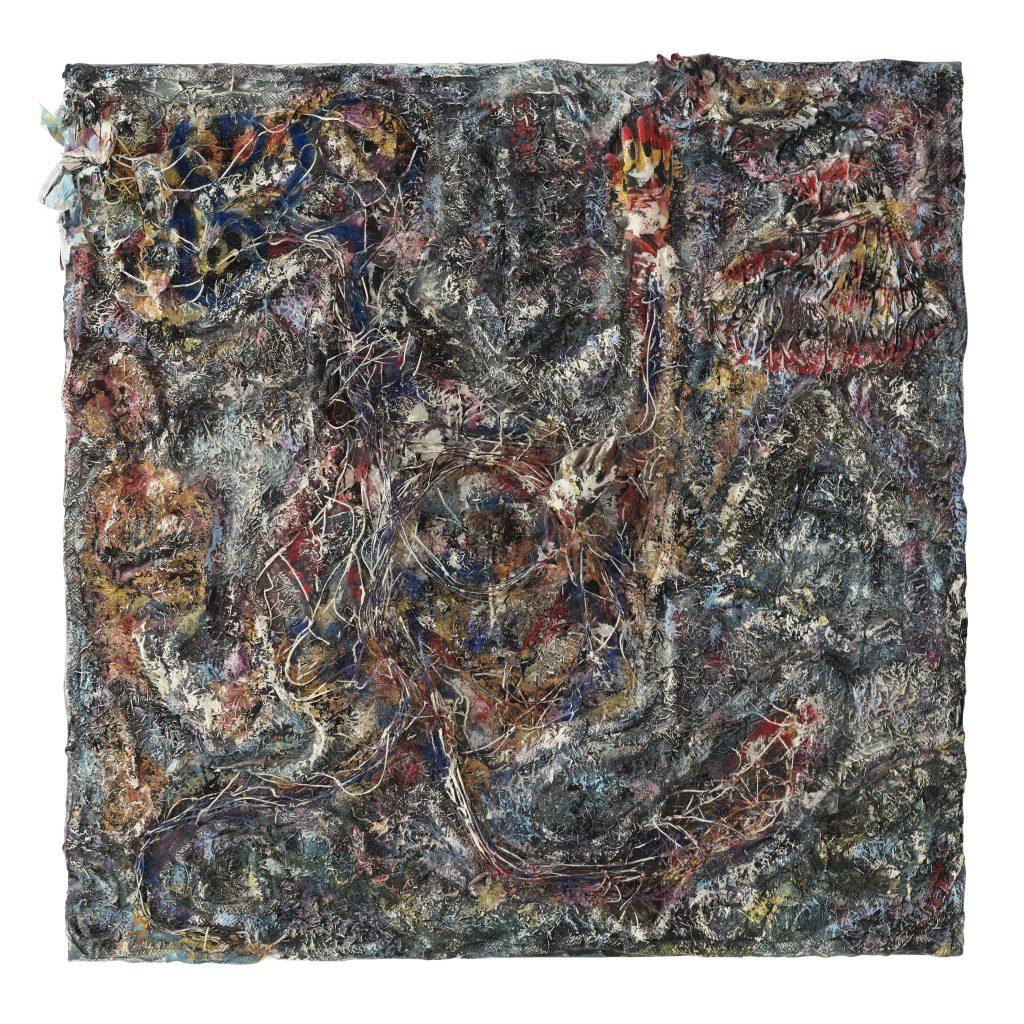 You may know Jane Fonda as an Oscar-winning actress, an anti-war activist, and/or a home-workout icon. But did you also know that she holds a seat on the board of the Souls Grown Deep Foundation, and that she’s long championed self-taught Black artists from the American South?

That last role is now front and center in Christie’s upcoming “Outsider and Vernacular Art” sale in New York. The offerings include 14 works consigned by Fonda, each made by one of  Thornton Dial (credited here as Thornton Dial, Sr.), his brother Arthur Dial, and his son Thornton Dial, Jr. The house expects Fonda’s two untitled mixed-media abstractions by the elder Thornton Dial to be among the auction’s top lots; both carry estimates of $50,000 to $100,000.

It’s a smart (and telling) bet. Dial, Sr. is now one of the most celebrated—and bankable—untrained artists of the past 100 years. Born into a sharecropping family in Emelle, Alabama in 1928, Dial lived to see his paintings, drawings, and assemblages merit solo exhibitions at the New Museum, the Museum of Fine Arts Houston, and others, as well as inclusion in the 2000 Whitney Biennial and dozens of top-tier institutional group shows.

Dial died in 2016, but his legacy has only grown in the nonprofit and for-profit hemispheres of the art world alike. His current auction record stands at just under $277,000, for a monumental assemblage sold at Christie’s London in 2019. Fonda’s untitled works probably won’t crack that ceiling, but with her eclectic star power behind them, they should nicely reinforce Dial’s secondary market.

‘Unsung Heroes’: A Show of Remarkable Designs Recognizes the Contributions Made by 12 California Women Artists

Art books coming soon in 2023: the pick of the crop