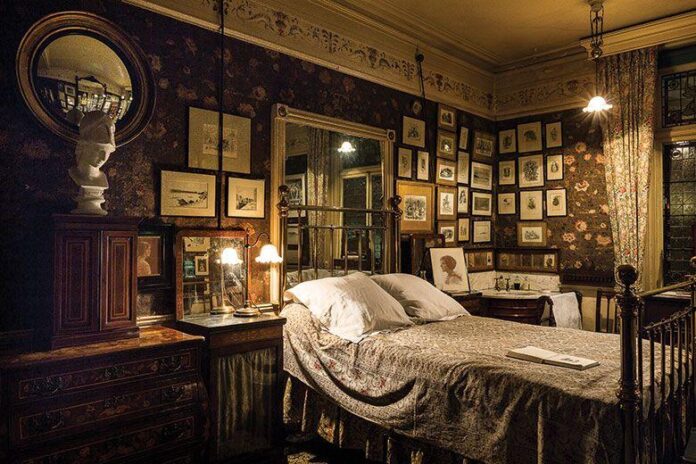 In the sepulchral gloom of 18 Stafford Terrace, a tall, white house in a narrow Kensington Street, light struggles through windows shielded by heraldic stained glass, blinds, lace curtains and drapes. This is the home of Linley Sambourne, his living space characterised by dark, patterned wallpaper, heavy furniture and walls hung to the ceiling with prints, drawings and photographs. The overwhelming impression is of stifling Victorian respectability and upper-middle-class prosperity—but neither is quite correct.

The house, now a museum owned by the Royal Borough of Kensington and Chelsea, is about to reopen after an extensive restoration. Sambourne originally trained as an engineer but became a highly successful commercial artist, producing book illustrations, invitations, certificates and decades of cartoons for Punch magazine. An enthusiastic amateur photographer, he left thousands of neatly filed and indexed prints and negatives.

There is also a long row of small, square boxes on a specially built shelf high on Sambourne’s studio wall, the contents of which remain a significant curatorial problem for curator Daniel Robbins.

The startling preservation of Sambourne’s house is thanks to Sambourne’s son, Roy, who lived on there, maintaining it as a visual shrine to his father. Sambourne’s daughter, Maud, meanwhile, made the social jump Sambourne never quite managed. She married well: her daughter Anne was mother of the photographer Antony Armstrong-Jones—Earl of Snowdon and husband to Princess Margaret—and became the Countess of Rosse on her second marriage. Anne Rosse co-founded the Victorian Society, and later sold the house to the Greater London Council, which was transferred, after the council’s abolition, to the Royal Borough of Kensington and Chelsea.

But Sambourne’s photography presents the greatest problem for Robbins. Beyond his commercial practice, Sambourne took thousands of striking street photographs of London and on his travels—but there are others. At his camera club, Sambourne asked his models to pose in the nude, sometimes in ways that can only be deemed to be pornographic.

It was believed all his images were taken at the camera club, until recent research identified a naked model perched on a chair in the Stafford Terrace drawing room—presumably when the family were on an outing and staff had the day off. The highest shelf in his studio was specially built to hold hundreds of glass negatives of these images. How and whether to display them in these sensitive times remains an unresolved dilemma. “I am taking advice,” Robbins says. “They are an important part of the history of this house, but…”

For now, they remain on the top shelf only.