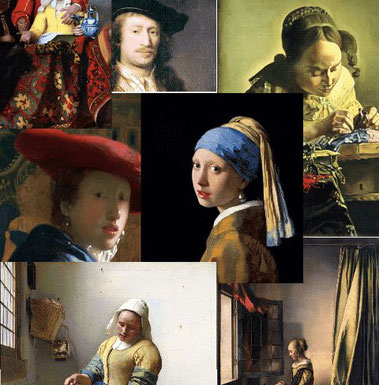 In this article, we will talk about the most famous paintings by Jan Vermeer, whose work is rightfully included in the golden fund of world painting. Jan Vermeer (1632 – 1675) is the brightest representative of the Dutch painting of the “golden age”, whose name is on a par with Rembrandt.

During his lifetime, Vermeer’s paintings were sold for very good money. After his death, he was forgotten for two centuries. However, at the end of the 19th century, he was again remembered, and the second stage of his fame began.

At the beginning of the 20th century, the huge popularity of Vermeer’s work gave rise to a number of high-quality fakes – which, according to Salvador Dalí, is a clear indication of the artistic value of the original Vermeer paintings.

So, the most famous paintings by Vermeer!

In first place in our rating of paintings by Vermeer is, of course. “The Girl with the Pearl Earring”! Did you know that the painting “Girl with a Pearl Earring”, painted by Jan Vermeer in 1665, is called the “Northern Mona Lisa?” And not because the ladies depicted in the paintings of Leonardo and Vermeer are equally far from the generally accepted standards of female beauty – but rather because of the global fame of both canvases.

The painting by Vermeer is, according to many experts, the pinnacle of the artist’s work. It was called upon to demonstrate all the heights of pictorial art that Vermeer managed to achieve.

This one of Vermeer’s famous paintings, among other things, is the most “intellectual” painting of the artist. Here Vermeer tries to comprehend the essence of painting in general.

In this small work, every detail, from the spot of light on the face to the surprisingly harmonious combination of textures with each other, comes together to form a flawless masterpiece. Vermeer once again demonstrates to us that of all the artists living at that time in Holland, he is the undisputed No. 1.

This one of Vermeer’s paintings, according to many art historians, is the strangest work in the entire creative heritage of the Dutch artist. Firstly, this work is unusually small in comparison with other paintings by the artist (only 24.5 x 21 cm). Secondly, Vermeer, who always masterfully worked with the background and lighting, seemed to have completely forgotten about his skills, having seated the girl in front of a white, completely uniform “hospital” wall.

This rather large canvas introduces us to the difficult, although not devoid of small joys, everyday life of a Dutch baroque brothel. The masterful use of chiaroscuro – an incredibly popular technique at the time – clearly testifies not only to Vermeer’s outstanding talent but also to the fact that he was well acquainted with the work of Caravaggio.