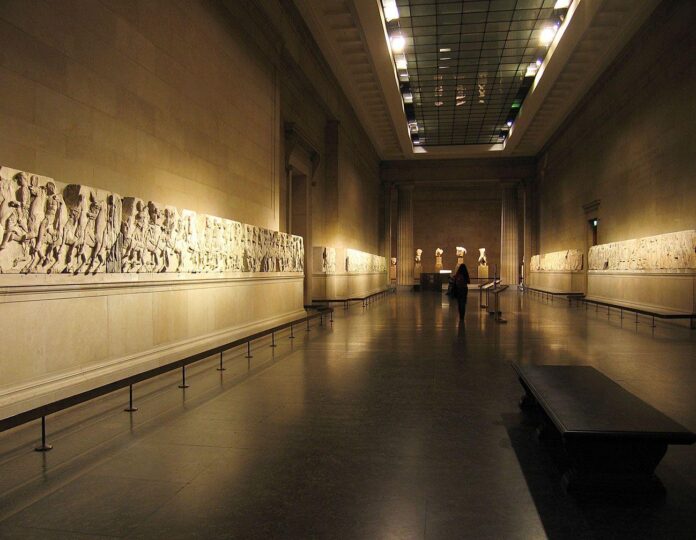 The UK prime minister Rishi Sunak has staged an intervention to stop the Parthenon Marbles from being repatriated to Greece.

Sunak’s sudden involvement in the issue came after a day of news reports stating that George Osborne, chair of the British Museum in London, was in advanced negotiations with the Greek prime minister Kyriakos Mitsotakis to return the 2500-year-old marbles to Greece, where they would be housed in a bespoke gallery built within the Acropolis Museum in Athens.

A spokesperson for No. 10 Downing Street, speaking on behalf of the prime minister, told reporters last night that the UK government “had no plans” to amend the British Museum Act, which passed through parliament in 1963, and which “prevents removing objects” from the museum’s collection apart from in certain circumstances.

The act, an update of previous legislation passed in 1902, prevents a UK museum from selling or giving away items from its collection except in very limited conditions which relate to the condition and usage of the materials. Those conditions are not yet met for the proposed restitution of the Parthenon Marbles to Greece. The Act has stood without precedent. In May 2005, a judge of the High Court of England and Wales ruled that Nazi-looted Old Master artworks held at the British Museum could not be returned to descendants of their original owners.

“Our position on this hasn’t changed,” Sunak’s spokesperson added. “Decisions relating to the care and management of the collections are a matter for the museum and its trustees. The Parthenon sculptures are legally owned by the trustees and operationally independent of the government.”

The British Museum did not immediately respond to a request for comment.

The spokesperson’s comments, first reported by Agence France Presse, will effectively supersede any action the trustees of the British Museum may plan to unilaterally take when it comes to restituting the Parthenon Marbles back to Athens, and will serve as a warning to the British Museum that it is legally obligated to not disband any aspect of its collection.

Sunak’s stance on the issue will come as a blow to Osborne, the UK’s former Chancellor of the Exchequer, who has met secretly with the Greek prime minister repeatedly over many months to discuss their repatriation. The marbles, also known as the Elgin Marbles, were removed from the Parthenon temple in Athens by British diplomat Lord Elgin in the early 19th century. They have been on display in the British Museum in London since 1816.

The Greek government has formally called for the marbles to be returned to their country of origin since 1983, arguing that they are an important part of Greece’s cultural heritage.

The UK government, however, continues to resist calls to return the marbles to Greece. Sunak’s stance on the issue is consistent with that of former prime ministers Boris Johnson and Liz Truss, both of whom went on record to say they believed the Parthenon Marbles should remain in the possession of the British public.

The British Museum Act 1963 was passed with the specific aim of protecting the collection of the British Museum. The act prevents the museum from disbanding its collection and returning artefacts to their place of origin, a practice commonly known as repatriation.

The Act is used as a first line of defence against the growing demands from post-colonial nations and indigenous groups who want to see the return of cultural artefacts that were taken from their rightful owners, within their countries of origin and without consent during the British Empire.

As recently as 2 November, Osborne said at the British Museum’s annual trustees dinner that “the law prevents” the restitution of artefacts like the Parthenon Marbles. Should he wish to facilitate their return to Greece, then he will need to find a way to convince the government to amend that law.