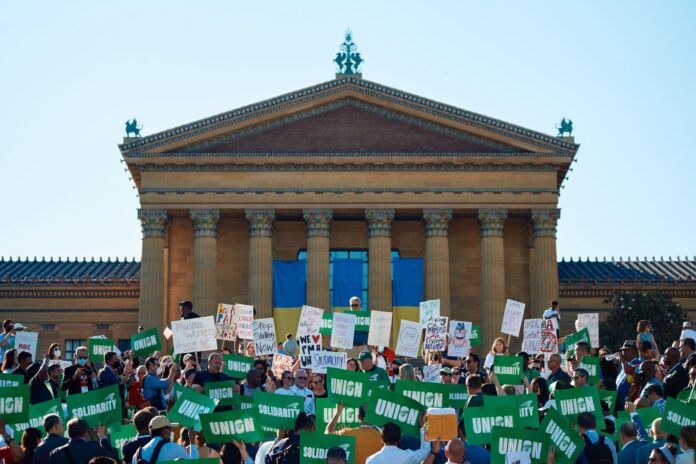 On 14 June, workers in the Philadelphia Museum of Art Union and representatives of the American Federation of State, County, and Municipal Employees (AFSCME) held a rally at the museum to call attention to ongoing issues in contract negotiations with institutional management. Five hundred people gathered on the Philadelphia Museum of Art’s (PMA) famous steps, where several speakers addressed the crowd.

“We heard and saw so much support from our union siblings at AFSCME, and the labour organisers in town for the AFL-CIO [American Federation of Labor and Congress of Industrial Organizations] convention gave us an incredible platform for our cause at PMA Union by supporting us and turning out in the hundreds for this rally,” says Nicole Cook, programme manager for graduate academic partnerships at the museum and a member of the union bargaining team.

This is the latest rally held to call attention to the bargaining process, which is revolving around questions related to job security, opportunities for advancement, safety from harassment, affordable health care, paid parental leave and fair pay. “We’re rallying today with the support of the national labour movement to show them we’re serious about winning these worker protections and won’t back down until we do,” says Sarah Shaw, an organiser with the AFSCME District Council 47. “PMA Union members are unified in their support for the fair and reasonable proposals we’ve made in bargaining. It’s time for necessary change. It’s time to come to an agreement on a fair contract now.”

The union also held a rally on 1 April, which drew 250 people. Unionising efforts at the museum began in 2019, spurred by information regarding pay discrepancies among workers who held the same positions. The following January, hundreds of workers at PMA signed a petition for changes in the museum’s anti-sexual harassment policies following several allegations of sexual misconduct made aganist the museum’s former assistant director of interpretation Joshua Helmer. Officially formed in 2020, the Philadelphia Museum of Art’s union made history when it became the first “wall-to-wall” union to form at a major US museum, with an overwhelming 89% majority.

PMA union organisers have taken to social media to give regular updates about bargaining sessions. Most recently, union workers posted about starting a strike fund. While striking is a tactic that is often on the table as part of negotiations, the PMA union currently has no plans to strike. At the 14 June rally, it was announced that $35,000 in donation commitments to the fund from a number of national and international labour organisations. Shaw says a strike fund acts like a safety net and “will make it possible for those workers to use their ultimate leverage, withholding their labor, which also means sacrificing pay”.

Despite this latest push from union organisers negotiations with museum leadership, which began in October 2020, are ongoing. Negotiating a first union contract can take up to a year and a half on average—and sometimes longer.

“Initial union contracts do take time. This contract is no exception. The museum is committed to reaching a collective bargaining agreement that achieves the best outcome for our staff while sustaining the museum for generations to come,” says a PMA spokesperson. “We know that’s only possible with highly motivated, dedicated staff. Nonprofit institutions have been significantly impacted by the pandemic. We have reached tentative agreement on a number of important issues and are committed to reaching a fair and appropriate agreement. We respect the right of union staff to make their voices heard.”

While both sides remain in negotiations, Shaw remains optimistic that a deal is close. “The finish line is in sight,” she says. “We have a handful of non-economic issues left on the table, plus pay and benefits. We can get there if management is willing to compromise and take our very reasonable economic proposals seriously.”