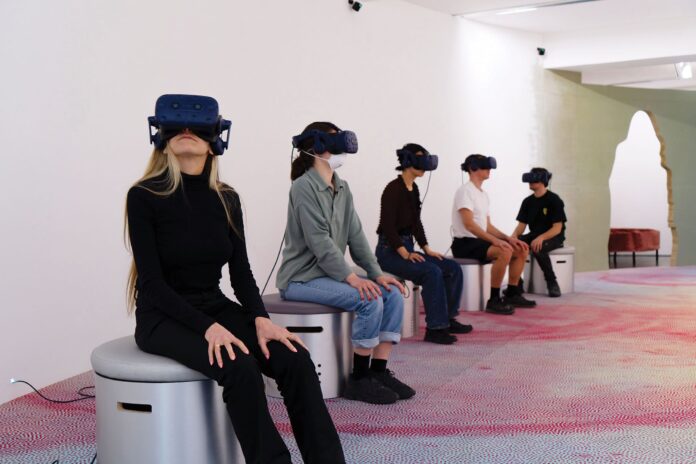 In the space of a fortnight in April and May, I saw two works made in virtual reality (VR) in London galleries. The first was Dominique Gonzalez-Foerster’s Alienarium, the artist’s second major VR piece, made for the sweeping show of her recent work at the Serpentine South Gallery in London. The second was Cold Light, a collaborative work by Lindsay Seers and Keith Sargent, part of a multimedia installation at the new Matt’s Gallery in south London.

I was struck in both instances by the same realisation: that the software, ambition and content has made giant leaps from the first VR piece I saw in 2015, by Jon Rafman, and other works from that period. Both were extraordinary experiences, proving that the VR space is fertile territory for artists. But the hardware “user experience” in the gallery (UX, as it’s known) appeared to be almost exactly the same as it was when I first put on a VR headset: a kindly member of the gallery team helps you in putting on the headset and sometimes gives you a handset. Any slight misadventure with the latter might take you to a menu where you really shouldn’t be.

Alex Boyes, art technologies producer at the Serpentine Galleries, says that this “cradling” is an ongoing aspect of VR in galleries. “What VR is trying to establish is a new way of conceiving of UX, not just with the ability for the artists to experiment with [the UX], but also from the audience’s perspective, in terms of agency,” he says. “So when you’re putting on a VR show, there are all these elements of onboarding, invigilation and a ticketing system that can’t necessarily move in an agile way to best cradle the experience.”

Boyes’s colleague at the Serpentine, curator in arts technologies Eva Jäger, says: “Where the technology and hardware is expanding the most—where the most experimental things are happening—is actually at film festivals, rather than in gallery spaces.” She adds that the film industry has created a “huge opening for the intersection between film-makers and artists who are building worlds for virtual reality” and, in addition, there is an “expertise” around that cradling and infrastructure of the VR experience.

Gretchen Andrew, curator of The Art Newspaper’s panel reviewing extended reality (XR) projects, suggests that a key element in the art world’s relationship with VR is that “there really isn’t demand for the headsets to the extent that either the art world or the gaming world expected. Market penetration and market adoption is just extremely low”. It remains, she says, “a discrete experience, where it was very much designed by the tech companies to be something that they, maybe ten years ago, thought everyone would have in their home in three years”. Like an X-Box or Playstation? “I got the impression that they thought it was like a cell phone.” It’s telling that even Andrew, an artist making work immersed in digital technologies and who reviews a huge range of work within the field, doesn’t have her own headset, which she says she finds “physically unpleasant”. The awkwardness of the hardware and UX seem “stuck in a decade ago”, she says.

Art is no game

But few doubt that once the cradling is done, VR provides rich, diverse art experiences. In 2016, Oliver Miro co-founded Vortic, which creates 3D exhibitions across web, mobile and VR. He is also a director of sales at Victoria Miro gallery, and various projects piloted through the gallery have featured VR components.

Vortic built its own rendering engine to better present virtual recreations of works and the spaces in which they sit. “Everything we make now is beautiful, and that’s all automated.” It’s also more user-friendly than other software of its kind and more accurate in reflecting the works’ physical qualities. “The issue a lot of the time with VR was that there were these game engines, which people would use, and it just doesn’t suit art… you felt all the time that you were in a computer game.”

At the core of Vortic’s work so far, then—whether for museums like CAC Málaga or the Wallace Collection, London, or commercial galleries—has been the creation of a more authentic experience of real objects in an exhibition space than in the online viewing rooms that have become familiar over the pandemic.

And VR has particular advantages, he says. “It’s the first digital technology that you actually create memories from,” Miro suggests. So instead of seeing something mediated through a screen like on an Instagram feed, with VR “you feel: ‘I stood in front of that piece’”, he says. “And that’s such a big difference.” He talks about its capacity for “humanness” and “natural interaction”.

Vortic was also used to create a bespoke VR exhibition by Doug Aitken, where the artist designed the environment for his works, and collectors were sent headsets, creating a kind of virtual private view (hugely successful, Miro says) within the space Aitken designed. Still, Miro describes the awkward cradling that accompanied that process—talking collectors through the set-up and so on. This may be more manageable within private settings but remains rather clunky in public spaces. Indeed, when Vortic use VR in fairs and galleries, Miro says, assistance is always provided. “I would worry too much about someone walking into a wall or something. You’ve got to have someone there manning it.”

Crucial, then, to how VR develops—in terms of the adoption Andrew describes and accessibility in galleries—will be to what extent its hardware can be made more portable and affordable. Both Boyes and Jäger mention the power of the work We Live in an Ocean of Air, made by the collective Marshmallow Laser Feast for the Phi Centre in Montreal. “I was able to sense my breath, my heart rate, I was able to be in the [work] with a friend and see their breath and movements. There are really interesting, more haptic things happening,” Jäger says. But in order to achieve these effects, visitors wore “a backpack with a battery in it”, she says. “And it’s very clumsy.”

Miro suggests that the obvious trajectory for VR is “just to be a little pair of glasses” and notes that some products are closer to that form now, but not of requisite quality. But the consensus is that it may be years before that more minimal technology is the norm. For now, Boyes mentions that the social media company Snapchat is developing “more wearable goggle technologies”. Then there is the rumoured entry onto the VR stage of Apple, perhaps even this year, with what might be a “mixed reality” headset. “Once Apple jumps into a market, you know that you tend to see a really good quality product, something that’s really nicely designed and that people want to wear and look cool wearing,” says Miro. Boyes says that Apple’s loyal consumer base means that the company’s VR product “would be onboarding and introducing a larger audience” into the field “that would generate potential opportunities in the future. Or I would hope so.”

Another factor in realising VR’s art potential will be to what extent artists can easily adopt the technologies—and, being artists, subvert or critique them from within. For instance, almost immediately after Microsoft launched its Kinect motion-sensor add-on for the X-box, digital artists were hacking them, prompting some remarkable works, including those by the artist Ed Atkins.

“I don’t know any artists who’re exploring VR from the hardware side,” Andrew says. “In some tech, you get artists who are strictly dealing on the software side—early Net Art, for example. But then you also get things in robotics and artificial intelligence, [where] artists are pushing on the hardware and the software side simultaneously. And I think the expense of doing that [with VR] just really keeps creative people outside of messing with the hardware as a creative process.”

Jäger also suggests that the corporate gatekeeping of the technologies may limit the potential for artistic interventions. “The tech companies are trying to make it ready to use, off-the-shelf,” she says. “And that causes some issues for artists just hacking it. And also I guess it influences what kind of artists are able to make those interventions, which is why it’s really important for public art institutions like ours to advocate for new relationships with tech companies. Sometimes, we’re strongarmed into working with a partner, but for the most part, in our team at least, we’re really defending the artists to be able to use any hardware that they want to use, and for the people who are helping them to implement that hardware not to be the same people who are trying to sell the hardware.”

With the current hardware and UX meaning that fewer gallery visitors might experience VR than, say, a video installation or augmented reality projects on their smartphone, do artists worry about the medium’s limits in terms of access? Jäger suggests it might be most useful to think of VR in the gallery amid a broader network of spaces available to artists. They are engaged with “concepts around creating a persistent world where you can have multiple users. And that, for those artists, has very little to do with the gallery space, [which] is one node within that. They’re thinking about their audience on a much bigger scale.” Hardware such as VR headsets, whatever they might develop into, is not the “central technology” of artists’ work, she says. “The central technology is more the game engine that you’re building the world in. And then in terms of the hardware, there’s very far for this to go.”

Fundamental to art and VR’s future is the technology’s ability to allow audiences to enter the space of the artist’s imagination effortlessly. “For me, as a producer, it’s essentially creating portals to these story worlds,” Boyes says. “And the more seamless or the fewer friction points that are introduced when you’re creating that user experience, the higher success rate that you have in getting the artist’s vision across and protecting the integrity of their work.”