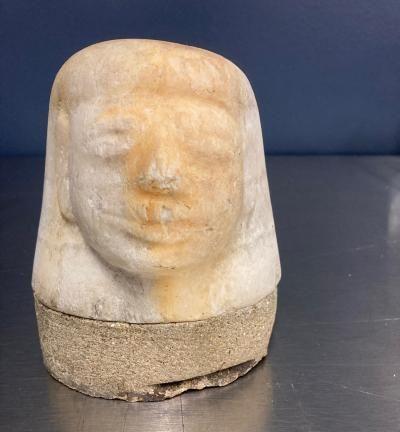 The lid of an ancient Egyptian canopic jar was seized by authorities earlier this month in Memphis, Tennessee, according to a statement published by the US Customs and Border Protection on 25 August.

The stone sculpture was en route to a private collector in the US, who is said to have falsified statements made regarding the value of the artefact and not provided clear provenance information for the object.

Authorities collaborated with researchers from the Institute of Egyptian Art and Archaeology of the University of Memphis, which holds a collection comprising more than 1,000 ancient Egyptian antiquities, to determine that the arfefact was authentic.

The piece likely dates from 1069 BC to 653 BC and depicts the funeral deity Imsety. Canopic jars were used by ancient Egyptians to store the internal organs of mummies. The likeness of Imsety protected the deceased’s liver.

Authorities have not released the name of the collector or dealer, and it is unclear what prompted the investigation.

The Convention on Cultural Property Implementation Act, a statute implemented in 1983 that strengthens enforcement of the 1970 Unesco Convention, prohibits the import, export and transfer of trafficked artefacts. Legal punishment for violating the law varies but typically involves fines and restitution.

Ahead of Its Reopening, Buffalo AKG Art Museum Rolls Out Its First Online Exhibition Dedicated to NFT Art