Home News The greatest portrait by one of the finest British artists: London’s National... 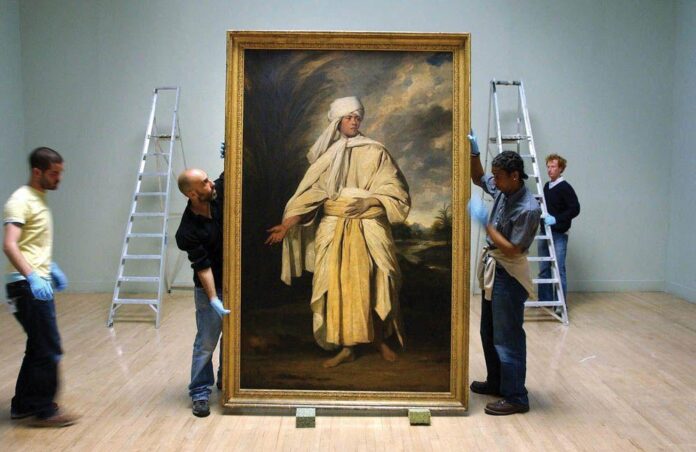 The Art Newspaper can reveal that the National Portrait Gallery (NPG) in London is setting out to raise £50m to buy the famed Joshua Reynolds Portrait of Omai (around 1776). Back in 2001, the Tate tried in vain to secure the work for £5.5m; a new £50m valuation was set this year. If the purchase is successful, this price would match that of the most expensive work ever bought by a UK museum, Titian’s Diana and Actaeon (1556-59). The Titian was jointly acquired by London’s National Gallery and the National Gallery of Scotland in 2009.

Omai is arguably the greatest portrait by one of the finest British portraitists. It depicts the young Tahitian man Mai (also known as Omai), one of the earliest Polynesian visitors to Europe, who sailed to Britain with Captain Cook in 1774 following Cook’s first voyage. Omai returned to Polynesia in 1777, accompanying Cook on his third voyage, and probably died there two years later, aged around 26.

Last March the UK arts minister deferred an export licence for Omai, initially until 10 July. The deferral was then quietly extended until March 2023, which means that an undisclosed UK buyer has privately given notice to the government that it intends to try to match the £50m price. The Art Newspaper can report that the institution going for the painting is the NPG.

Several other museums had a potential interest. The Tate had made valiant efforts to buy the portrait in the early 2000s. Omai would have fitted into the collection of the National Gallery, but its efforts are now focused on fundraising for its 200th anniversary building project. Royal Museums Greenwich might also have been interested, because of the Cook connection, as would the Captain Cook Memorial Museum in Whitby, Yorkshire.

Public display once and for all

A spokesperson for the NPG told us: “Sir Joshua Reynolds’s Portrait of Omai is one of the greatest British portraits and a painting of singular national, and international, cultural significance. The National Portrait Gallery is supportive of the crucial efforts being made to give UK institutions the opportunity to acquire this uniquely important painting for the nation to ensure it goes on public display once and for all, where it belongs. The second deferral period will give us the chance to explore a number of fundraising leads and gives potential supporters the opportunity to come forward to help stop this key work of British culture from leaving.”

It is ambitious of the NPG to attempt to buy Omai, since it is in the concluding stages of a major £35.5m refurbishment of the gallery, with the fundraising just completed. Closed since 2020, the building is due to reopen next year.

So how will the £50m be raised? The National Heritage Memorial Fund, which is administered by the National Lottery Heritage Fund, is an obvious source, although its resources are limited, since its annual grant-in-aid is £5m a year.

The Art Fund will almost certainly assist. A fund spokesperson says: “We have been discussing how we could potentially support and campaign to save this incredibly important work.” This suggests that a generous grant would be offered, but with total Art Fund support for acquisitions for all UK museums last year amounting to £3.3m, this would only contribute a very small element of the £50m needed.

Funding from private donors now needs to be handled sensitively. The scandal associated with donations made by certain members of the Sackler family has made all museums more careful about the ethical acceptability of donations. And the invasion of Ukraine rules out approaching potential Russian donors. Nevertheless, the NPG has quietly made very good progress in approaching individual donors and charitable trusts. The current economic situation post-Covid and a looming recession will also add to the challenges.

The NPG could also request a one-off special government grant. Such grants for museum acquisitions have been very rare in recent decades, but there is a feeling that this is one purchase which they might agree to back.

If the Reynolds portrait is successfully acquired, it will join another important depiction of Omai. William Parry’s Portrait of Omai, Sir Joseph Banks and Daniel Solander (1775-76) was bought for £950,000 in 2003 and is owned together by the NPG, Amgueddfa Cymru-Museum Wales and the Captain Cook Memorial Museum.

The success of the Parry joint acquisition suggests that it is still possible that the NPG might link up with another museum for the Reynolds. Its director, Nicholas Cullinan, is open to cooperative efforts to save Omai for the nation.

Omai was first sold in 1796, four years after Joshua Reynolds’s death, going to the fifth Earl of Carlisle. For more than two centuries it passed down through the family to the 13th Earl. When in 2001 the Tate heard that the earl was intending to sell the painting, it offered £5.5m, but problems arose and the sale never proceeded.

The earl instead sold Omai at Sotheby’s in 2001. Estimated at about £7m, it ended up fetching £10.3m. The buyer was a Swiss company, Settlements SA, controlled by the Dublin collector and horse-stud owner John Magnier. A year later he applied for an export licence to take the painting to Ireland. By this time Omai was valued at £12.5m. An export licence was deferred to allow a UK buyer to match the price.

In an astonishing act of generosity, an anonymous private donor offered to give the Tate the full sum to buy Omai. However, the owner refused to sell, so consequently an export licence was withheld. This meant that Omai had to be kept in the UK, so it was put into a secure art storage facility, probably in London.

Omai was lent in 2005 to a major Reynolds exhibition at Tate Britain and later that year the owner applied for a temporary export licence to lend the painting to Dublin’s National Gallery of Ireland, where it remained for six years. This loan gave the owner substantial tax benefits under Irish law (a loophole which was subsequently closed following the case). Omai was returned to the UK in 2011 and once again went into storage.

In 2016 another application to temporarily export Omai to Ireland for 15 months was refused. By this time the Reviewing Committee on the Export of Works of Art had become concerned that there should be limits on the extension of temporary licences.

Earlier this year an application was made for a permanent export licence, at a new valuation of £50m, and it is this which has given UK buyers the opportunity to match the price. The £50m valuation was confirmed as appropriate by two independent valuers, including the London dealer Anthony Mould.

Although Magnier has owned Omai for more than 20 years, he never seems to have enjoyed the painting in his home. But as a financial investment he will certainly have benefited substantially from the acquisition.