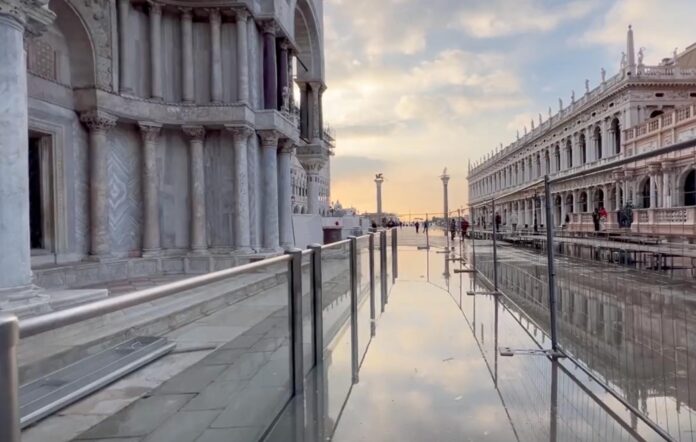 St Mark’s basilica, the most famous and splendid monument in Venice, is now protected by its own small flood barrier, a fixed wall of glass that prevents water in the square from invading the 1000-year old church as it has done hundreds of times over the last decades.

The barrier first proved its worth on 7 November when the water level rose to 95cm above zero measuring point established in 1897, then again on 21 November, when Mose, the great hinged barriers between the Adriatic and the Venice lagoon, were raised to hold back a storm surge of 185cm, the second highest since the great flood 1966.

The reason why Venice now has a barrier within a barrier is because the low-lying area around the basilica floods at a mere 85cm but the authorities have decided to raise Mose only when the level reaches 120cm in order to allow the freest possible access of cargo ships to the big commercial port of Marghera on the inside of the lagoon. In short, economic interests trump conservation interests.

In 2018, the Procuratoria, the ancient management board of St Mark’s, decided that the constant flooding was doing such damage to its rare marbles and mosaics that they could not wait any longer for Mose to be finished, and, in any case, the barriers would not be raised early enough to protect the church, so they would go it alone.

Pierpaolo Campostrini, a member of the Procuratoria at the time, says that the project was designed by Mario Piana, the Proto (architect in charge of the basilica) and Daniele Rinaldo, a Venetian engineer. Tight management by the basilica’s board meant that that it was finished in record time compared to Mose (begun in 2003, the big barriers were first raised successfully 17 years later), despite delays caused by aesthetic reservations on the part of the ministry of culture. The cost was €5.3m.

Reaction to the five metre long, 1.3 metre-high, ultra-transparent glass wall around the basilica is on the whole favourable. Francesco Bandarin, former director of the Unesco World Heritage Centre, tells The Art Newspaper that it is elegant and unobtrusive. The barrier works in conjunction with a system of valves and pumps that prevent water from backing up in the rainwater drains. The plan is now to add further protection by building up the height of the Piazzetta’s waterside looking out towards the island of San Giorgio and modifying the drains in St Mark’s Square.

The basilica barrier was ceremonially inspected on 7 November by Mayor Luigi Brugnaro and Matteo Salvini, the minister of infrastructure, who made self-congratulatory speeches although neither had contributed to it in any way. It would have been the opportunity to mention the need for a major plan to begin considering the implications for Venice of the 2021 IPCC (Intergovernmental Panel on Climate Change) report, which foresees a rise in sea level of 43cm to 84cm by 2100 in its intermediate to middling high scenarios of global warming. For even at the lower level, the buildings of the entire city will under great stress from the water in unprecedentedly constant contact with the porous brickwork. But as usual, the authorities seem to be unaware of this death foretold.