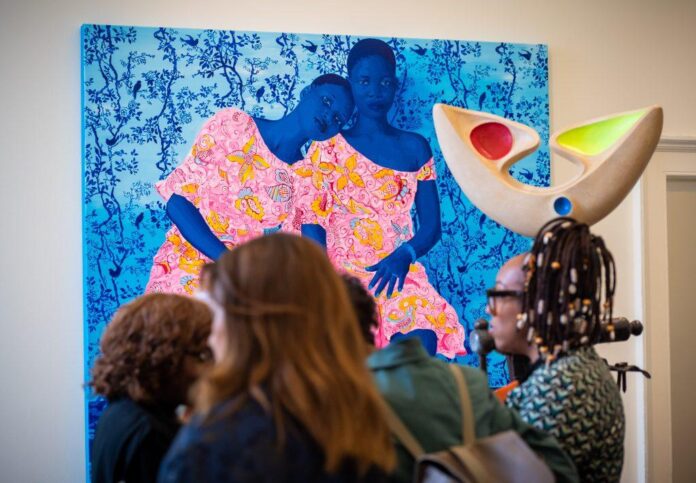 In the ten years since the 1-54 Contemporary African Art Fair first burst onto the London art scene, the event has grown to include editions in Marrakesh, New York, and Paris, and helped break down barriers between contemporary Western art and African art.

Visitors to Somerset House for the London edition’s opening day on Thursday (October 13) were greeted by performers rehearsing for artist Grada Kilomba’s installation and performance  (2021). The 105-foot-long wood block work installed in the courtyard cut an imposing figure, even as it sat low against the Neo-Classical grandeur of the building.

Inside the fair, booths were crowded, with dealers reporting interest from both private collectors and institutions as well as pre-sales and sales. Several dealers had a successful first day, including London’s DADA Gallery, which sold out its solo booth of works by Bunmi Agusto, and Accra’s mighty 1957 gallery, which sold all ten works from its solo presentation of pieces by Ghanian artist Isshaq Ismail. London and Stockholm’s Bernston Bhattacharjee gallery sold 30 smaller works by Sola Olulode as well as some larger pieces by the British Nigerian artist.

1-54 is known for being a great place to pick up affordable pieces and spot the next big art stars. Here are five key works at various price points on offer at the fair. 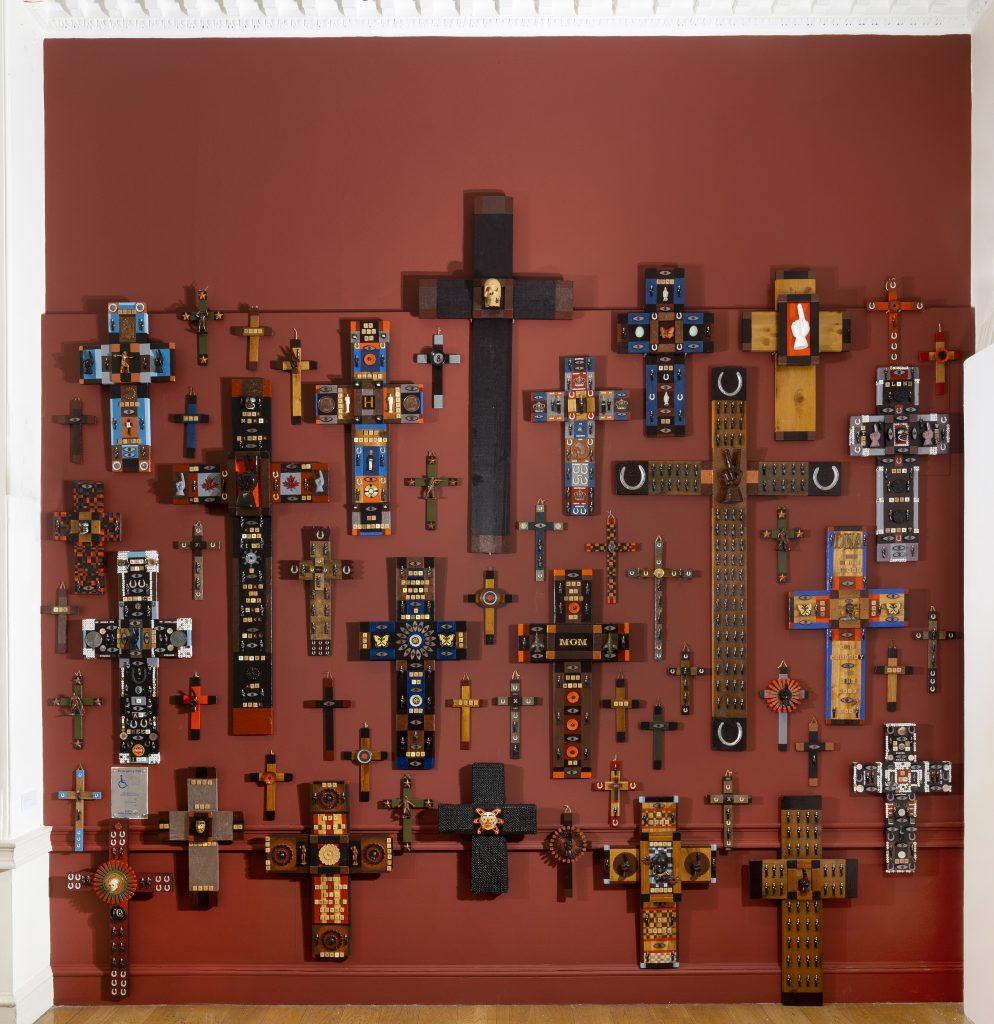 Jan Wade is a Canadian artist of Afro-South American heritage who works with found objects, installation, drawings, embroidery and textiles. Her art centers on her mixed heritage and her family’s history of displacement from Africa to South America to Canada. (1994—2021) is made up of 90 objects, found and made by Wade over a 17 year period. She is known to search relentlessly for objects to incorporate into her pieces. This assemblage is the most extensive piece she has created to date. It is a big ticket buy for a landmark work by the artist. 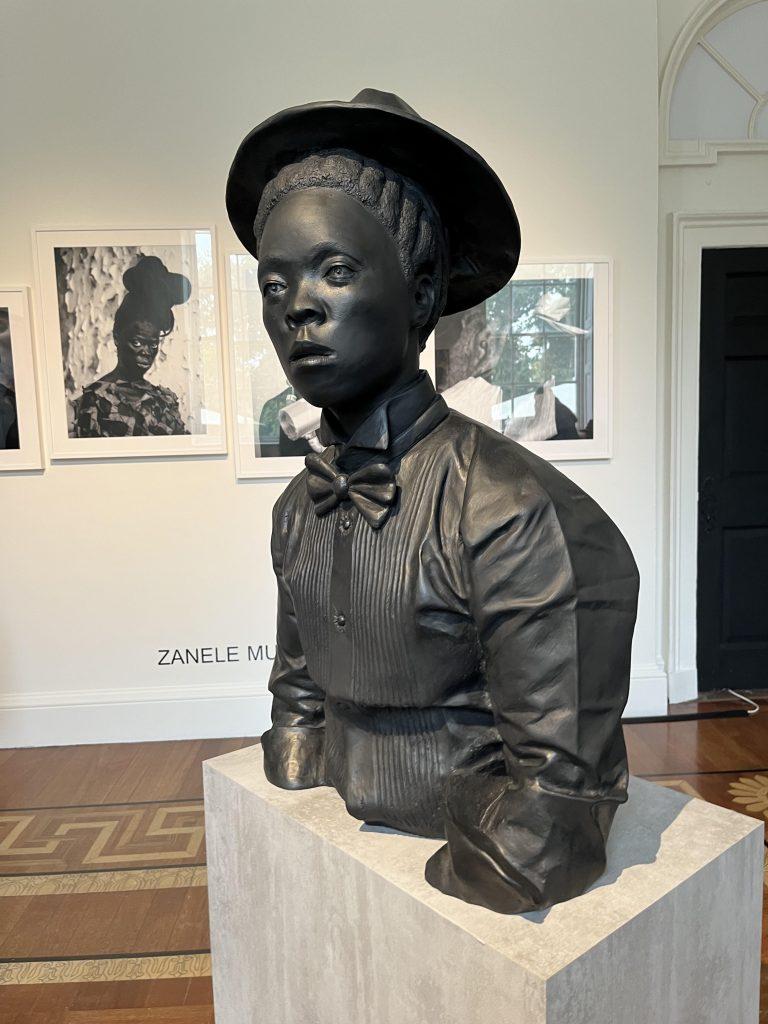 Zanele Muholi’s recent Tate Modern retrospective gained them a serious amount of traction despite its opening in at the end of 2020 amid the global pandemic. The exhibition of their photography, which they see as photographic activism, featured pieces that depict and celebrate South Africa’s Black lesbian, gay, trans, queer and intersex population.

Although they are primarily known for their photographic works, sculptural pieces such as this bronze example do not represent a great departure from their typical works as one might initially think. This work is a self-portrait that has a real power about it and while it is a less known branch of Muholi’s work, it has a confidence and completeness that speaks to their long and dedicated practice. 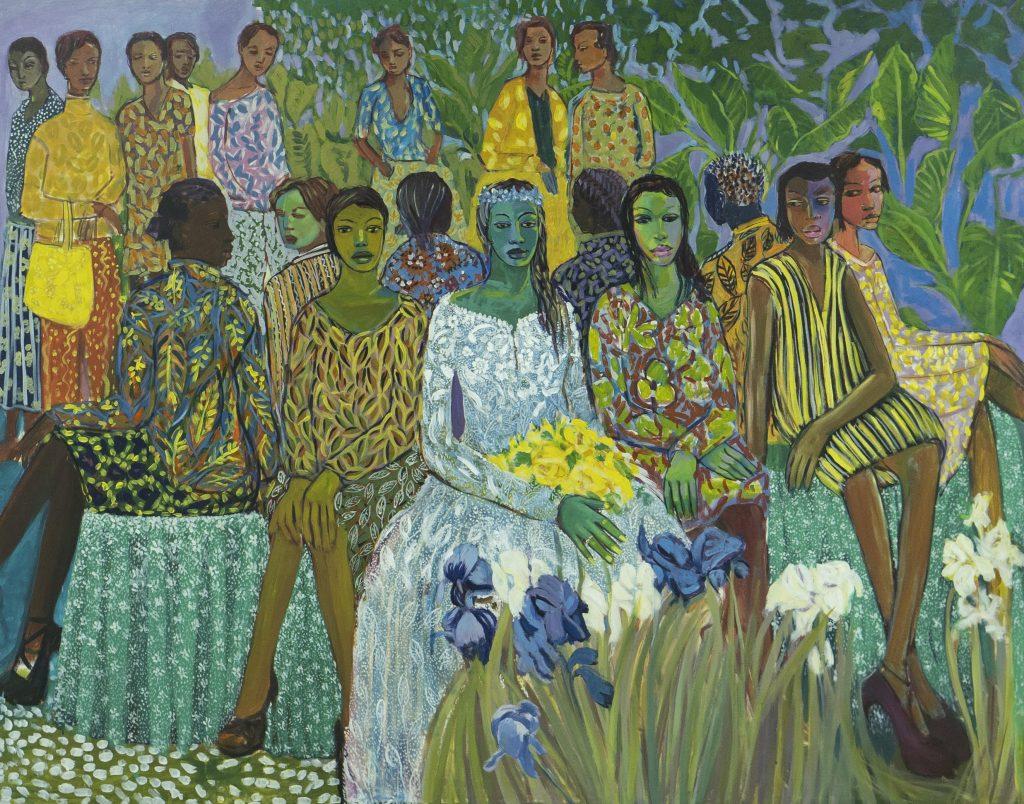 Dawit Adnew is an Ethiopian painter from London’s increasingly formidable Addis Fine Art gallery. The gallery’s 1-54 booth, twinned with a sell-out stand of work by Selome Muleta at Frieze London, showcases more of the delicious painting currently coming out of the region.

Large paintings such as this combine Adnew’s love of traditional composition with his previous work as a textile designer. This is a chance to pick up a work by a great talent before his prices sail out of reach. 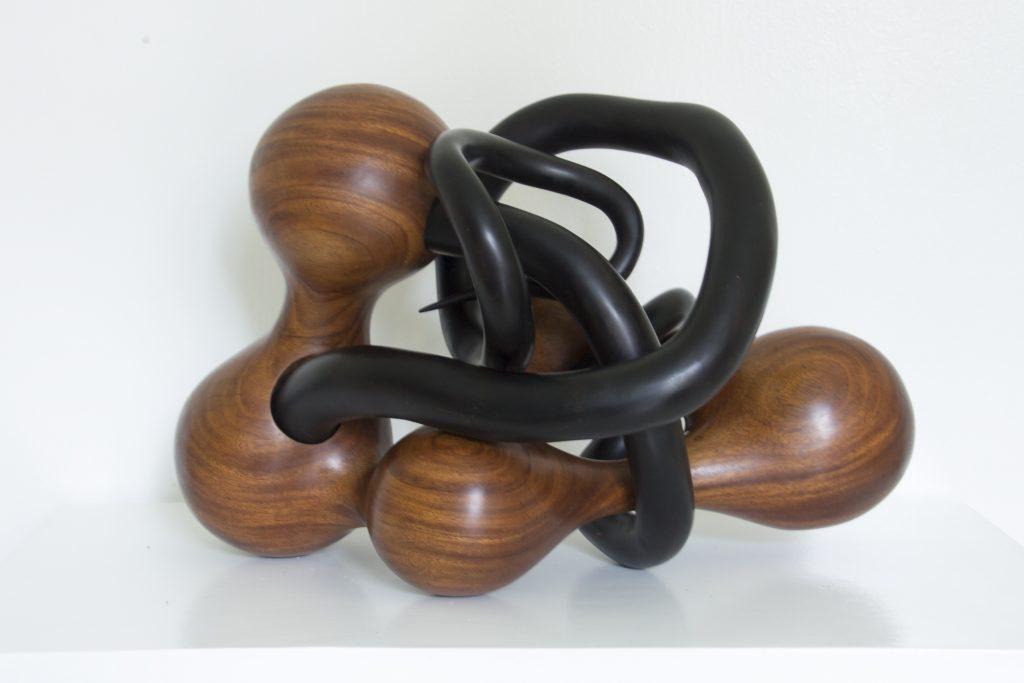 Donald Wasswa is a multidisciplinary Ugandan artist concerned with nature and science—a fact clearly seen in his part-animal, part-alien forms that are being shown alongside works on paper. These Giger-esque beasts, carved out of wood, have tentacles and spikes pushing out of their smooth surfaces. Part symbiosis, part parasite, they draw you in and terrify you at the same time.

In the wake of the recent exhibitions such as the ‘In the Black Fantastic’ Afrofuturist summer show at London’s Hayward Gallery, Contemporary African Art and diaspora art is gaining popularity for its place in the fight for equality in The West and in the history of black culture and music in general. This work is a great example of the genre from the continent. 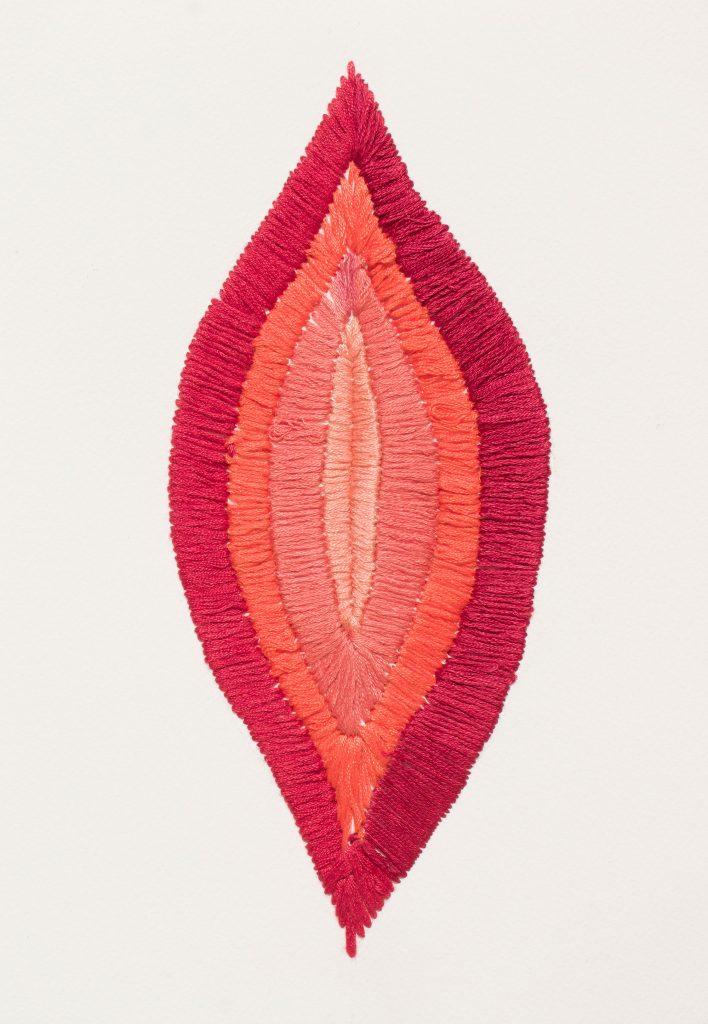 Sahli is a Moroccan artist who works with fabric, weaving and works on paper. Frankfurt’s Sakhile & Me gallery is showing a selection of delicate and intricate works on paper alongside a woven sculpture of a human heart. Some are mixed media, while others are entirely embroidered or made from feathers. Each explores the female body and vary in form from organic shapes to more literal depictions of various anatomy.

These reasonably priced works would make a great first purchase for a new collector or art lover.