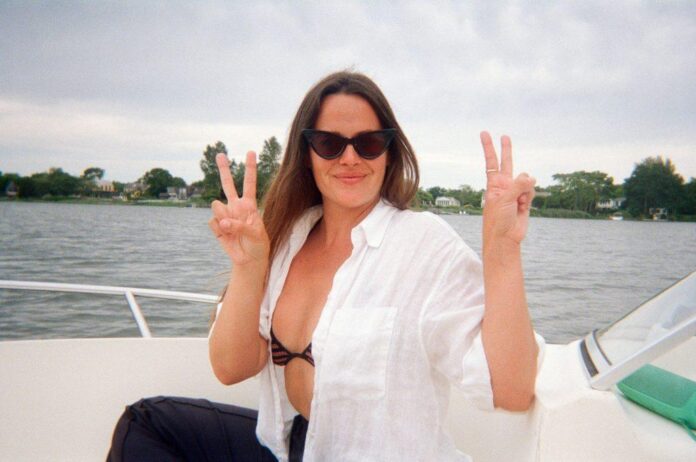 Welcome to Wet Paint in the Wild, an extension of Annie Armstrong’s gossip column wherein she gives art-world insiders a disposable camera so they can give us a peek into their corner of the madcap industry.

The first time I met Nicole Nadeau at a party in Los Angeles, she told me about how rapper and Fyre Festival proprietor Ja Rule started collecting her work. Thus, I knew I had a friend. Her signature floral statues embody the same effervescent spirit Nicole carries around with her, and when she told me she was heading out to the Hamptons for the Fourth of July weekend, I couldn’t resist sending a disposable camera along with her. 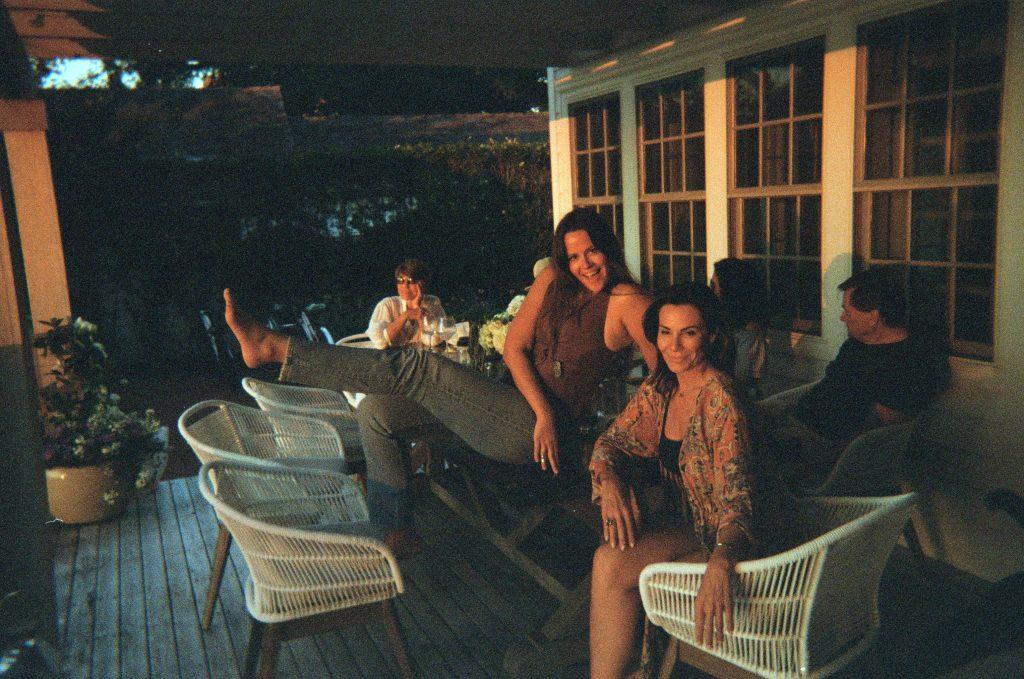 I arrive at night to a little family dinner to kick off Fourth of July week… and my birthday, the fifth. This is my aunty Lu (Luann De Lesseps) and I at her house in Sag Harbor trying to make the most of the golden light. I may have gotten yelled at for blocking her light. She has always been one of my biggest advocates and will always tell me how it is. 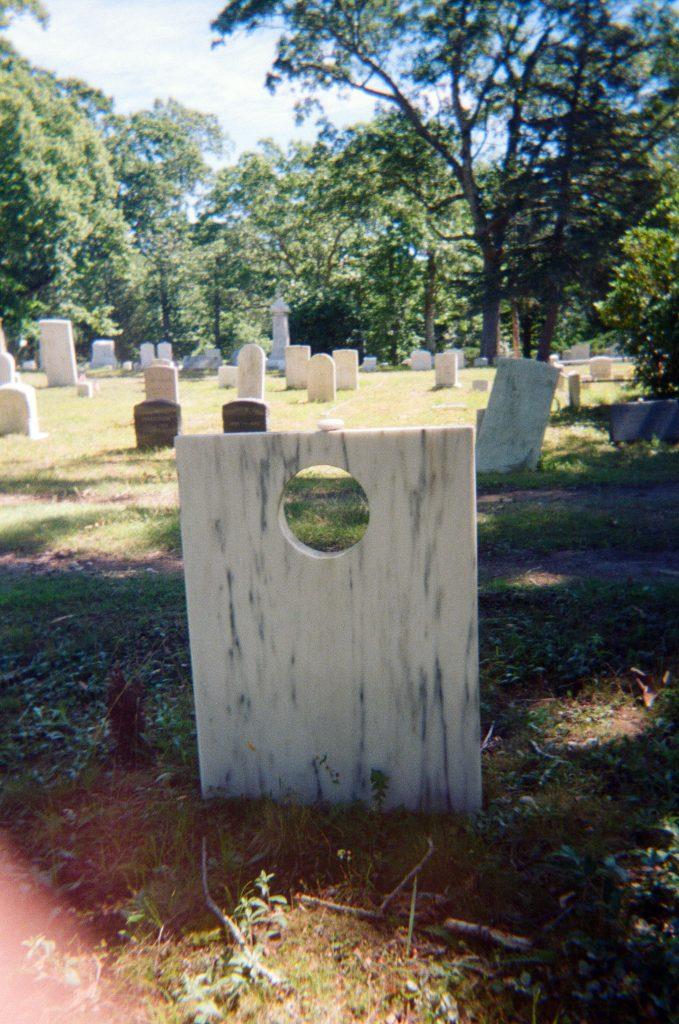 Every morning, I go running in the Oakland Cemetery in Sag Harbor. Being around death gives you perspective. I also like keeping them all company. The cemetery is historical and full of ship masters and young fisherman that died trying to catch whales. One of my favorite memorial reads “perished in actual encounter with the monsters of the deep. Entombed in the ocean. They live in our memory”. All the men that died on the boat were younger than 28. 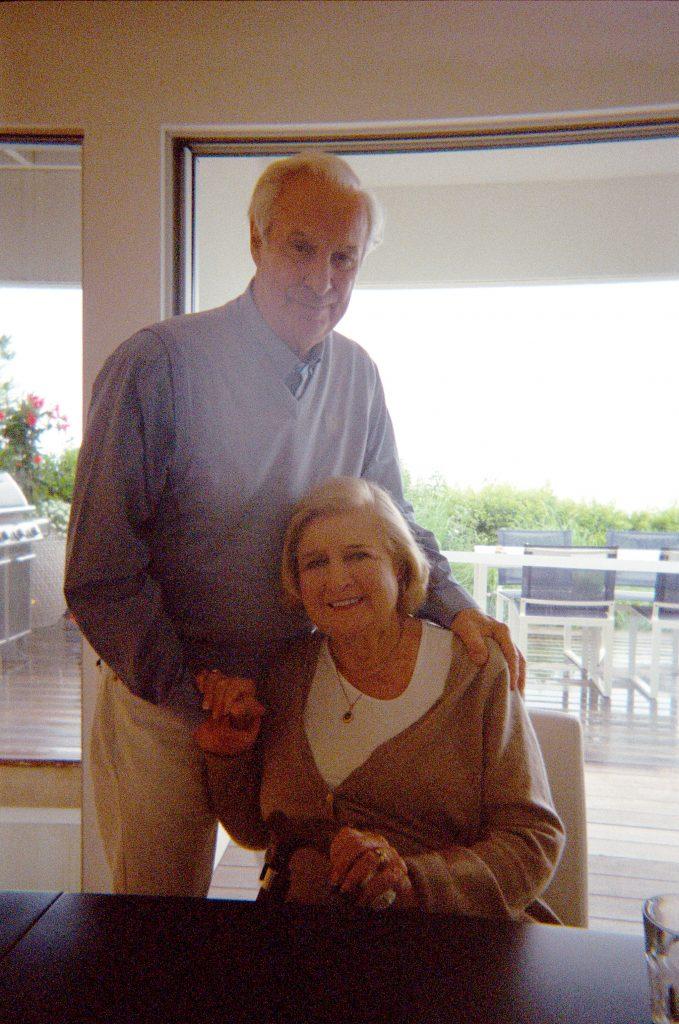 Later that day, I went to a lunch at Carole Holmes Delouvrier’s, an old family friend. I went to a life-changing trip to Burma with her when I was in college and fell in love with her charismatic energy. (Also, she fly fishes so that’s an easy win for me.) She invited me and the fam over for a rainy East Hampton cheese soufflé lunch. Because of her life force, she always has the most magnificent people around her. This afternoon I met and was charmed by none other than painter Peter Heywood and his wife, the legendary Shirley Lord Rosenthal. We talked about all the inner secret worlds of the swinging ’60s, the Beatles, and Peter recommended me a book: David Hockney’s Apparently Caravaggio had a an optic lens from Galileo which helped him create his masterpieces. 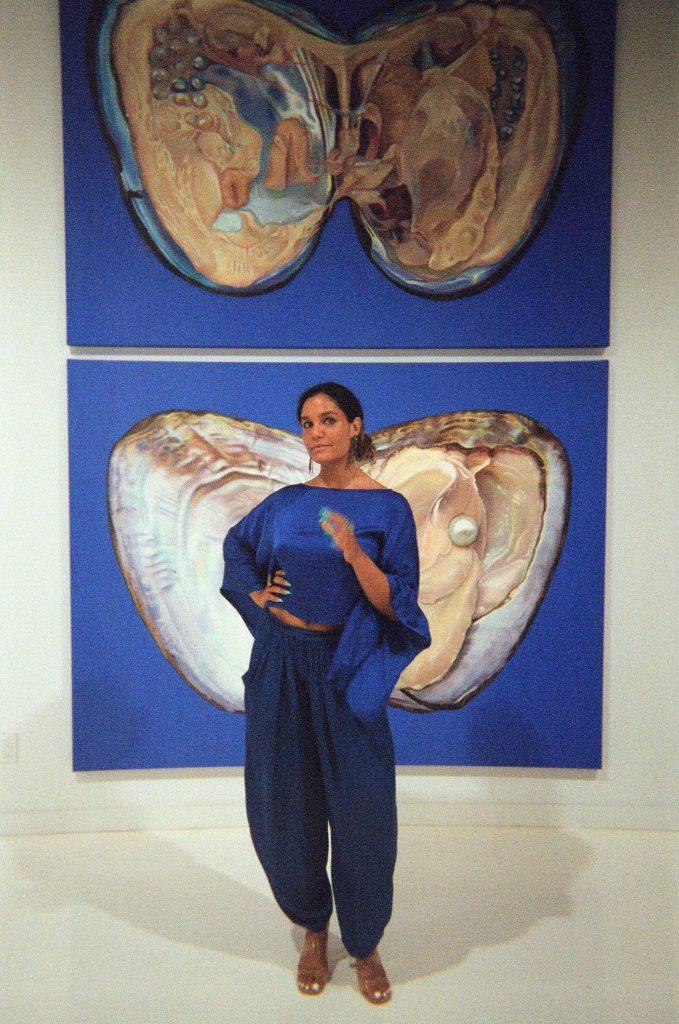 Afterwards, I hopped around to some openings. This one was “Holy Water” at Eric Firestone, curated by friend Zoe Lukov. The painting behind her is Fawn Rogers. Such a fun show and dialogue. The show took inspiration from the sea and aspects of water, from fishing and surfing to baptism and migration. I know Zoe because I was in Venice Beach and was going to rent my little surf shack back house/art studio to her. She also surfs. I love a salty sis. 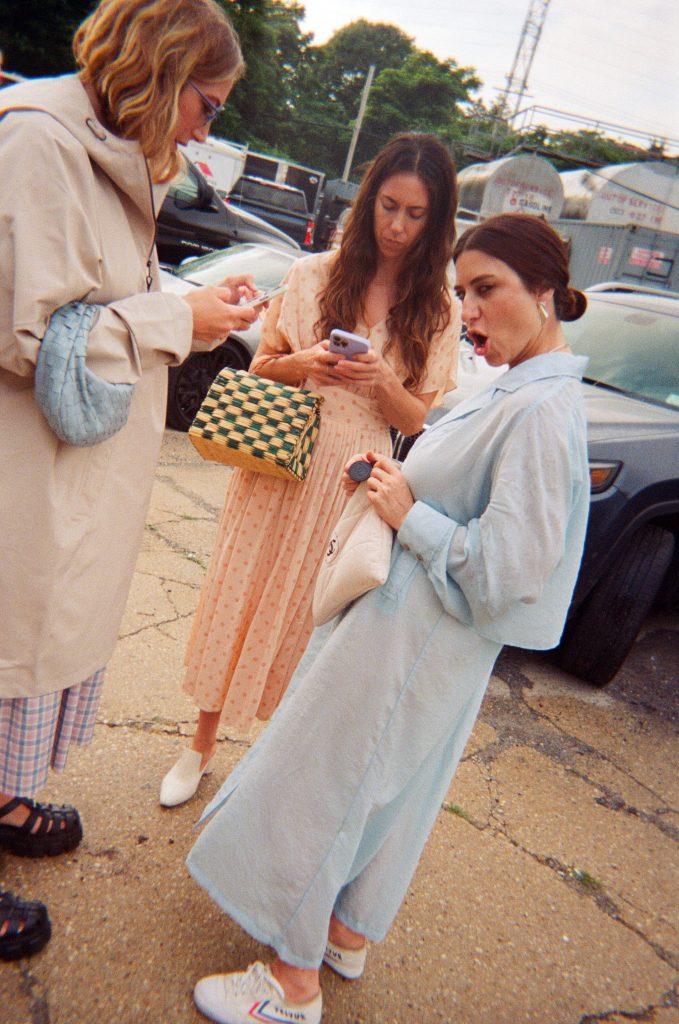 Outside the show I catch familiar faces: my dearest Kyle de Woody, who has the best taste and eye, as well as such a generous spirit and is a talented human being. Jimena Garcia, the best eyebrow sculpturist in the game, and dancer Bonnie Crotzer. We’re living a pastel dream. They are daring to find a last minute dinner reservation this weekend. 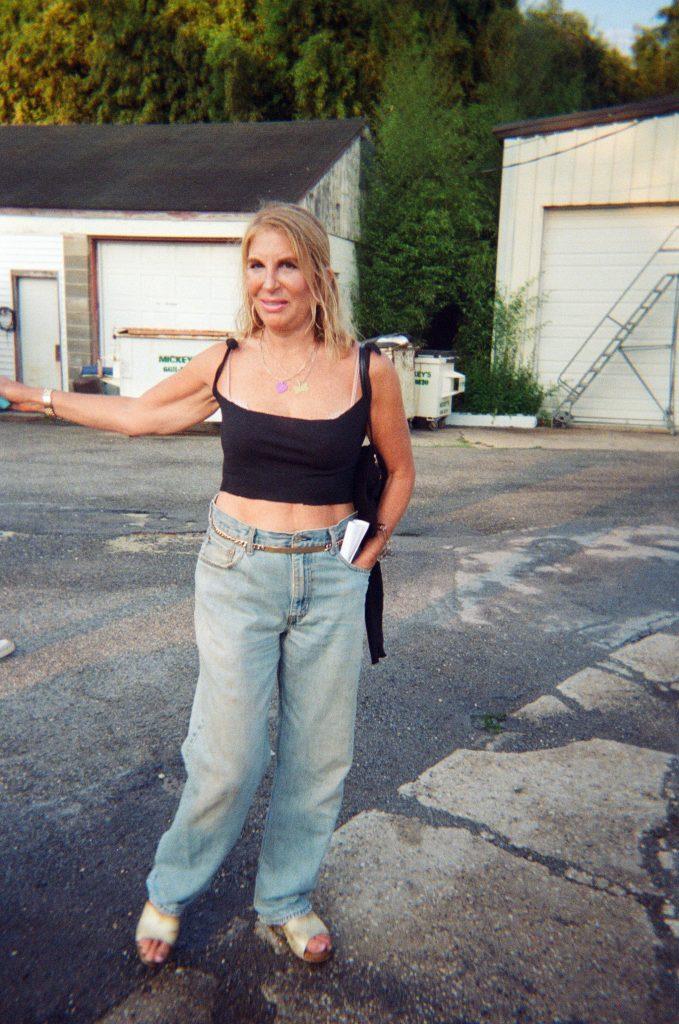 Jo Shane, conceptual artist. My comrade in arms. We support each other and walk each other off of cliffs. A lot of virtual studio visits and phone calls. She proofreads my artist statements, which is asking a lot. 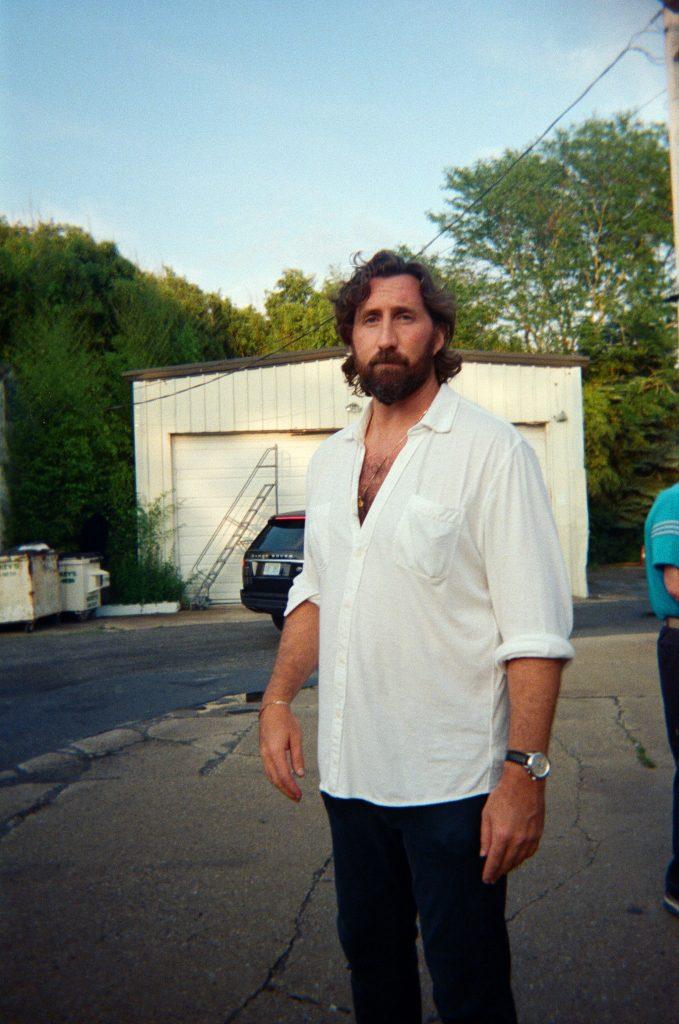 I almost don’t recognize Ray Bulman, Hole Gallery director, without him making a delicious pasta or shucking oysters. The second tallest person in the room comes up to the height of his chest. (I sell one of my books at the Hole shop. Go get one). 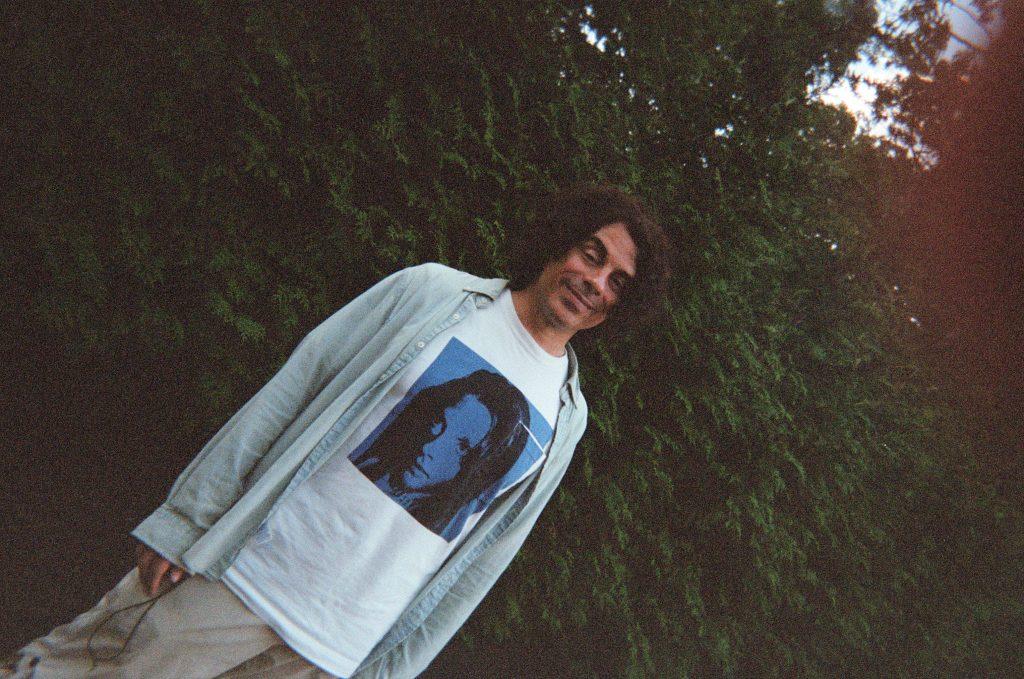 Hi David! I’ve known David Komurek for a bit (when he used to sport a big mustache), having met at the Beatrice Inn when we realized we both studied industrial design. I was working briefly on designing a fragrance bottle for the Chelsea Hotel with him when we were kids. He’s never without ideas or projects. 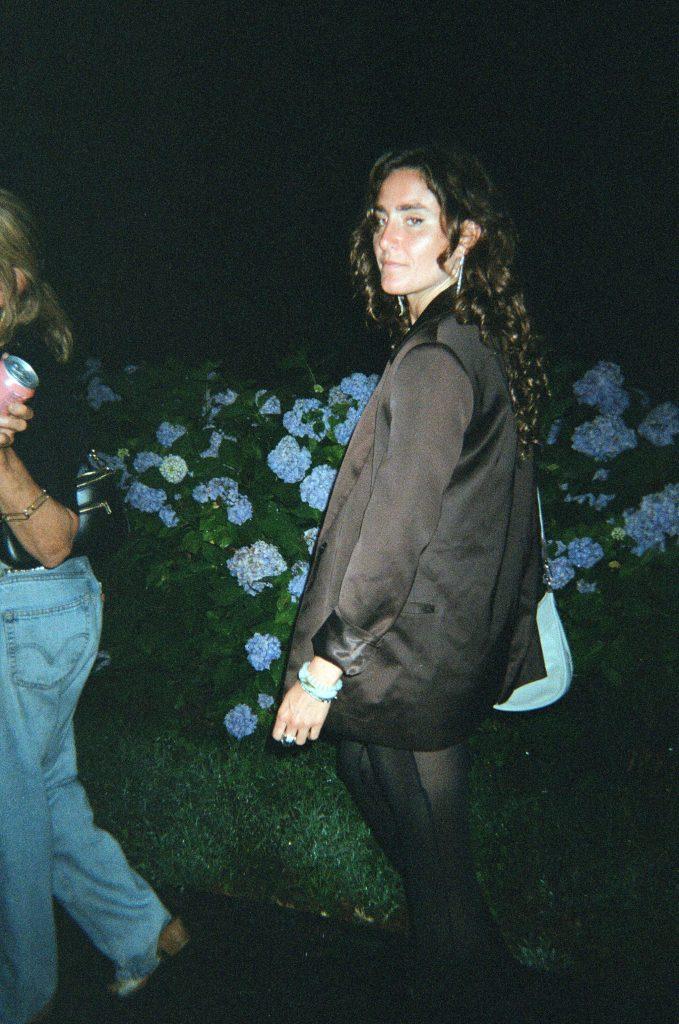 I make my way over to Tripoli Gallery dinner with my cousin Victoria de Lesseps, who is more like a sister to me. We call her Peach. She is also an artist. Her solo show recently wrapped at Another Gallery L.A. We both feel so grateful to be in a family of artists and creative eccentric energies. One would think it all could get very competitive, but we’re all supportive of each other. If you see her around, ask her about her epic graphic novel she’s been working on. It’s otherworldly. 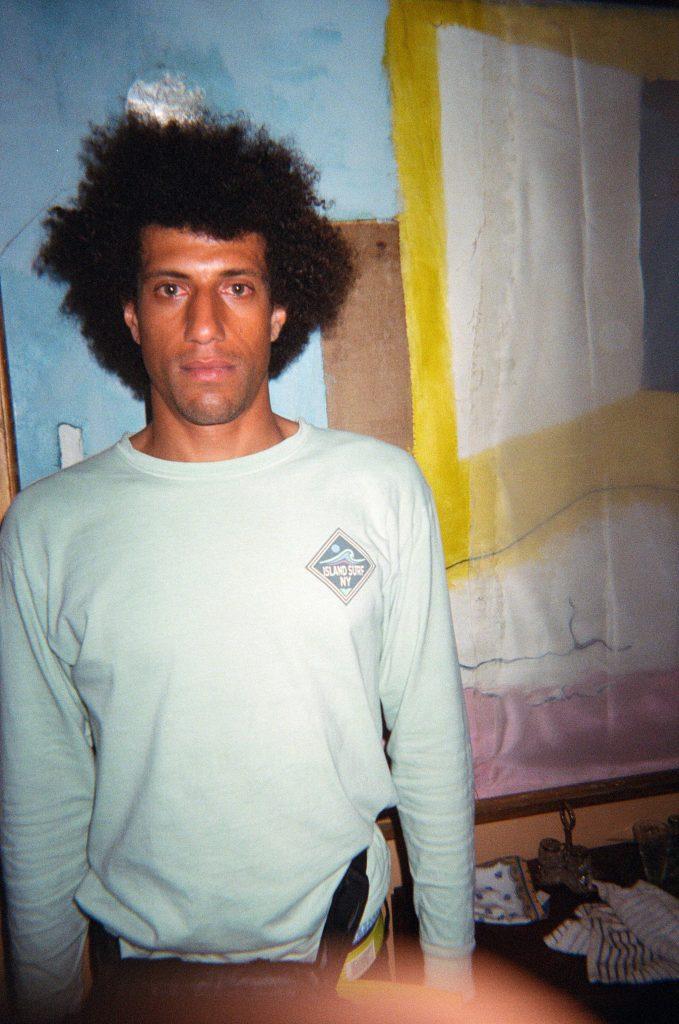 Trip Patterson, the most refreshing and charming gallerist on the East End. I love the plywood walls of his gallery and the dinners down the street at his home. 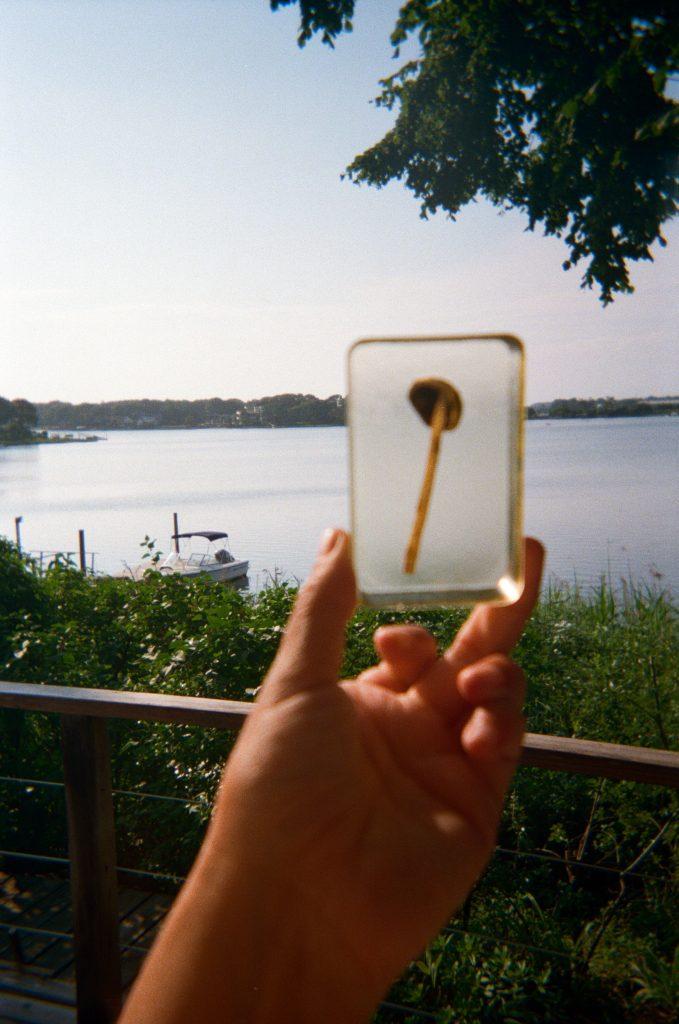 Morning! I may or may not have micro-dosed with my parents this week. This is one of my small sculptures. At the beginning of the pandemic, I would make work out here on this back porch everyday. It became one of my many transient studios during that time. 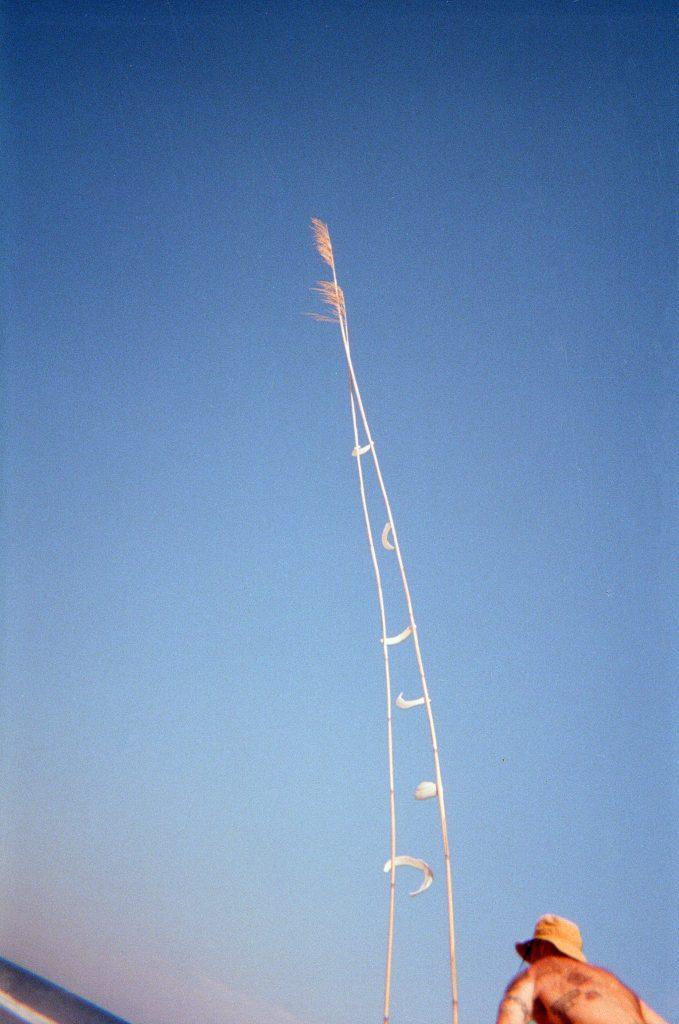 In the afternoon I head to Gibson Beach, a beach I grew up going to, and the first topless beach ever went to as a kid. These non-permanent sculptures are my favorite there. And I hate that i don’t know the artist. These sculptures were a nice reprieve as I had just spent three hours in traffic trying to get to the illustrious Ellie Rines, my favorite human, to see the Frank Stella show at the Ranch in Montauk. There was a terrible accident and I was trapped on a back road, cars blocked in every direction going in and out of Montauk. 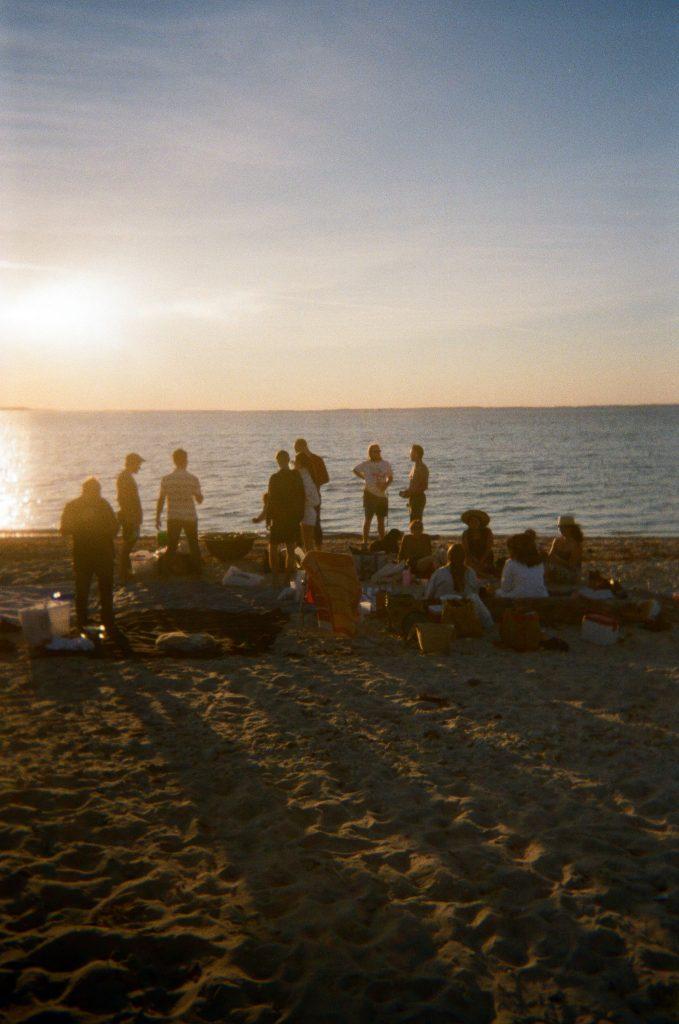 Sunset time! Went with my bud, photographer Greg Kessler, to Alexander Dijulio’s July 4 beach BBQ hangs at Maidstone Beach. It quite the little crew: Ross Bleckner, Kristina Felix Delano, Nio Varden, Esther Park, Mamoun Nukumanu Friedrich… We grilled clams over the bonfire foraged that day with scapes from the farm. It was all fun and games until I noticed a fire had started a half mile down the beach in the nature preserve/seagrasses. The fire was started by someone’s fireworks… terrible. We grabbed our buckets and started sprinting down the beach to put out the fire. We put it out with no help from the cops that were watching us. 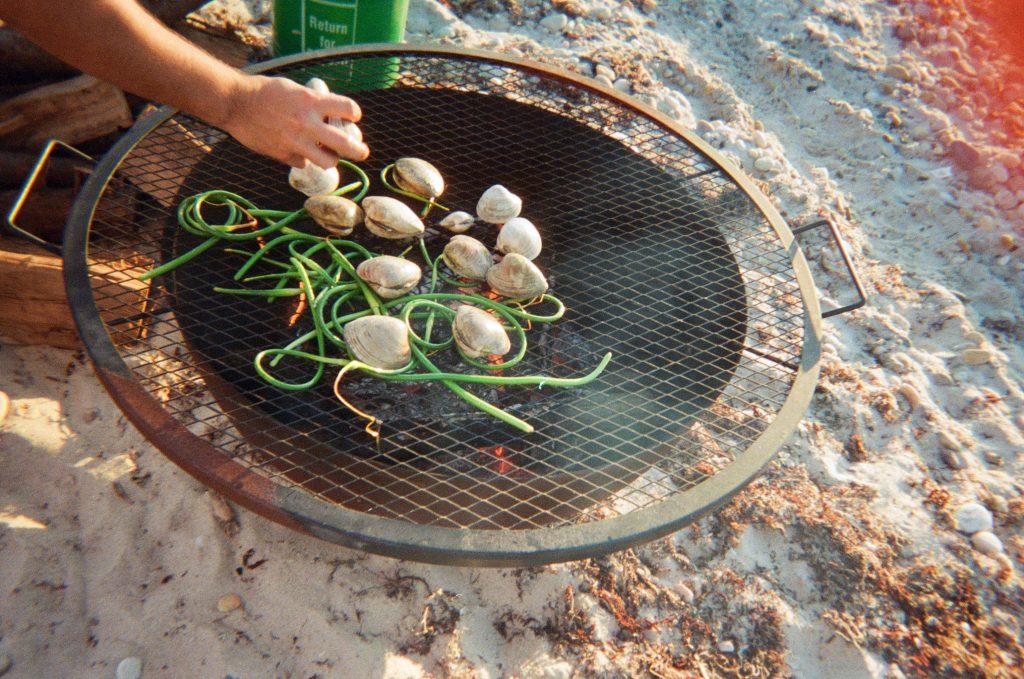 Foraged clams with scapes from the farm! 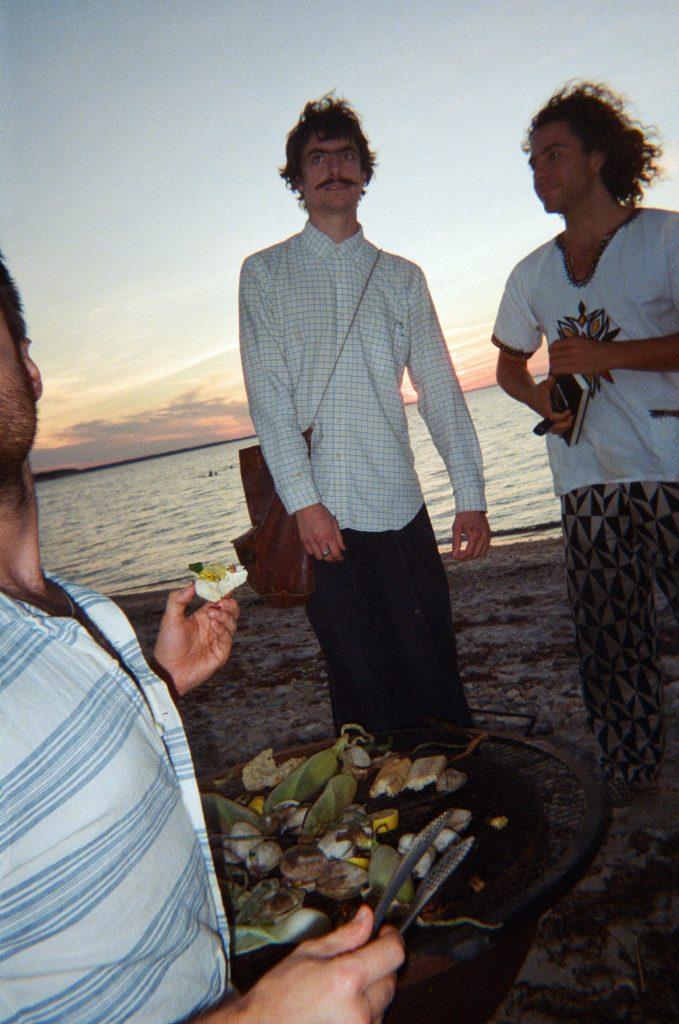 My cousin Noel de Lesseps, who is more like a younger brother in many ways, arrives. I always took great pride in being a mentor to him. He is also an artist, and has an upcoming show at the Ranch in August. His surrealist dreamscape paintings channel Magritte and Hieronymus Bosch. 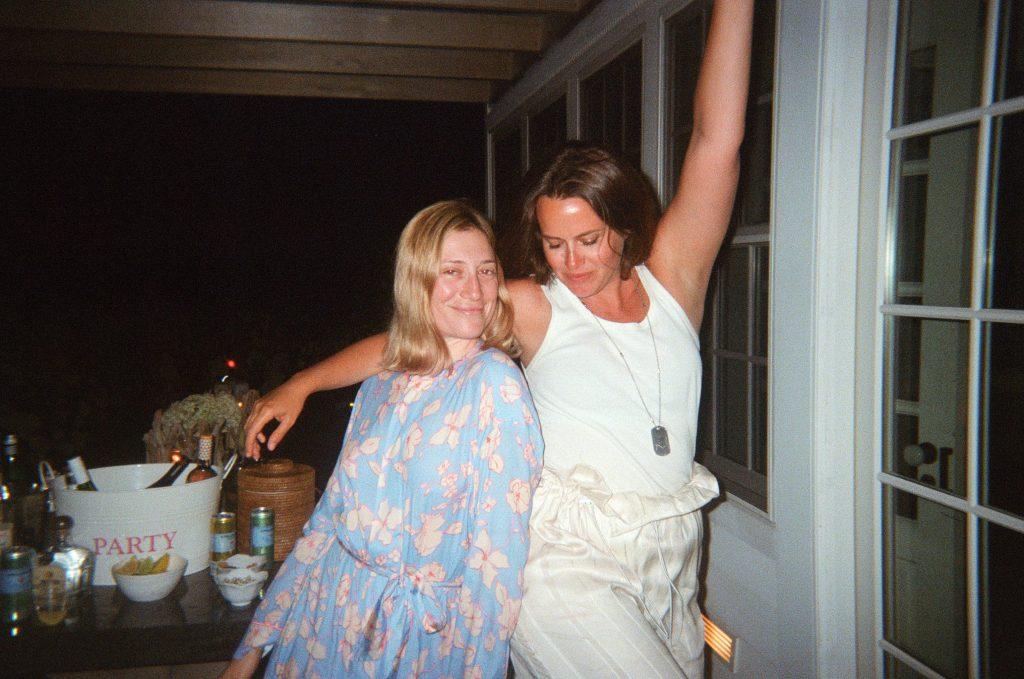 Made it back in time for my birthday dinner dance party. This is me with my partner-in-crime and artist Audrey Guttman. No matter how long it’s been or what countries we’re in, whenever we’re together, it’s like when we first met in our youth. 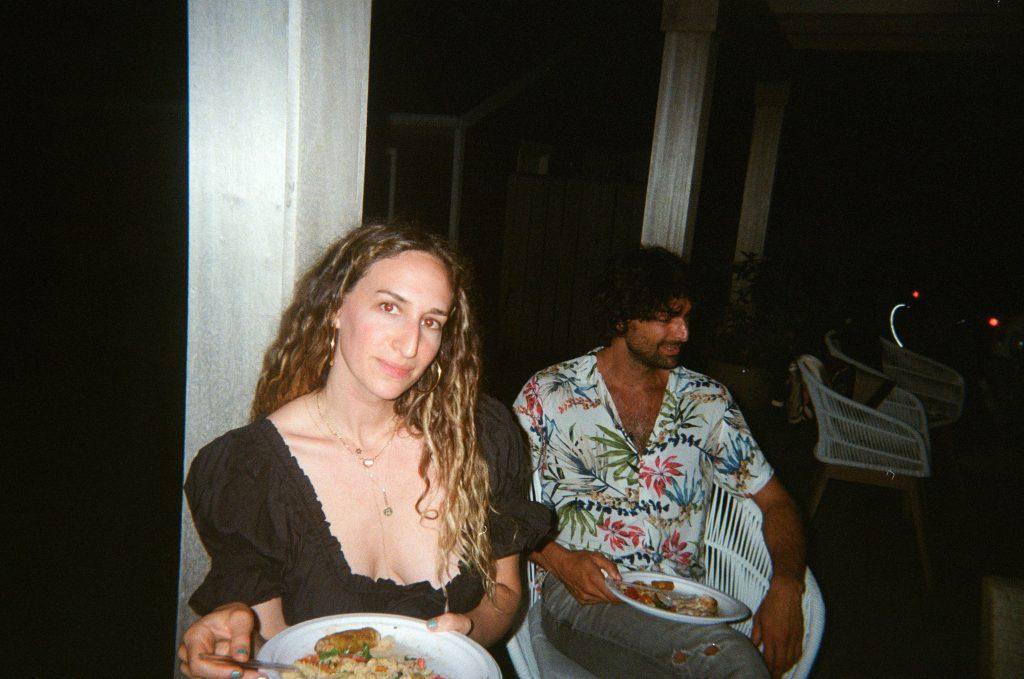 These are Audrey’s cousins and my friends Zoe Guttman and Thomas Guttman, who I’ve known since we were little kids. Her family lives my dream, always having a cast of characters over to their cool house. 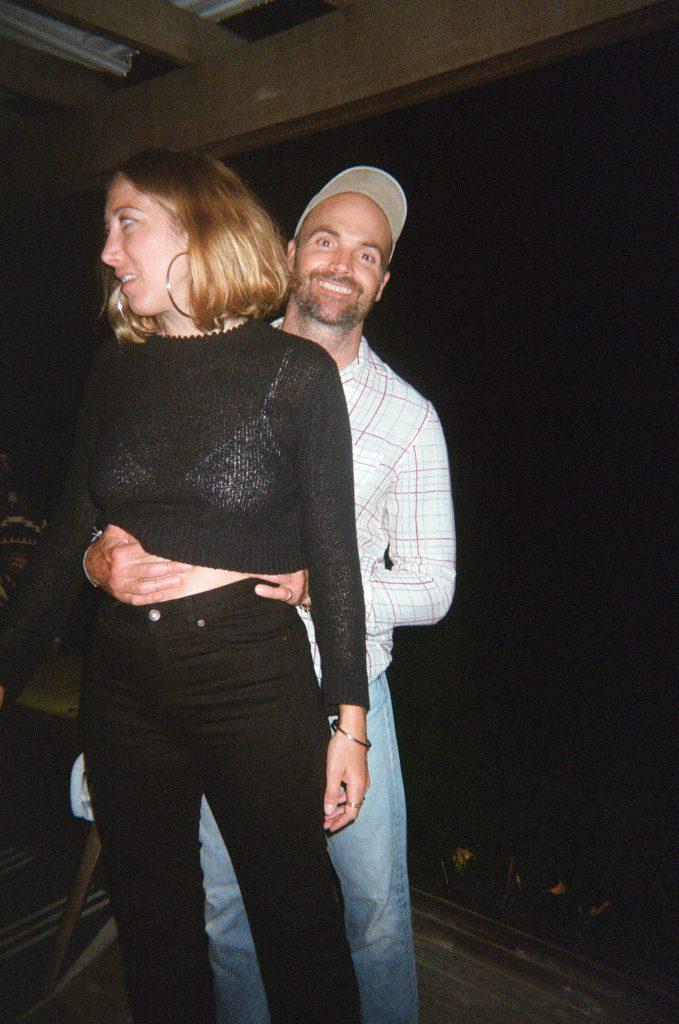 I love this picture of Kyle De Woody and her boyfriend Samuel Camburn. It’s giving me high school dance energy, which is totally the vibe I was going for tonight. 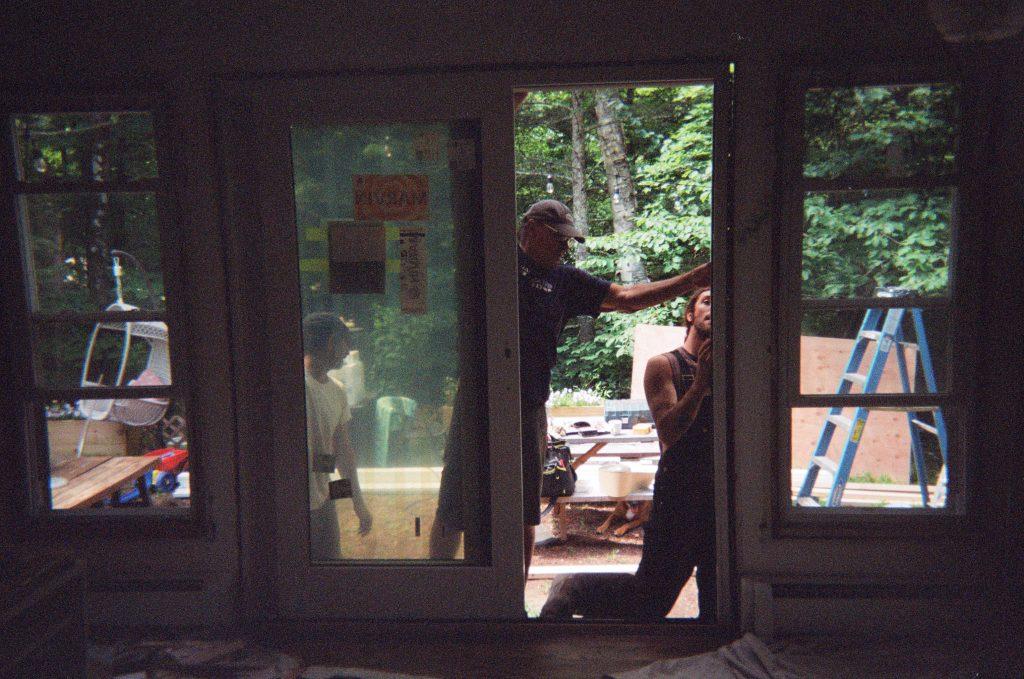 The next day, I went upstate to the Woodstock/Bearsville zone to see my twin sister, Coryn Nadeau, a clinical art therapist, her husband DJ Jacobs, and my cutest angel niece Indigo. It’s such a family affair in this creative little town. We are all makers, so my sister gets a lot of her renovation done on her house. She put my dad to work fast! He’s a fourth-generation master craftsman and can pretty much make, fix, or build anything. He’s easily the token cool guy in the room. 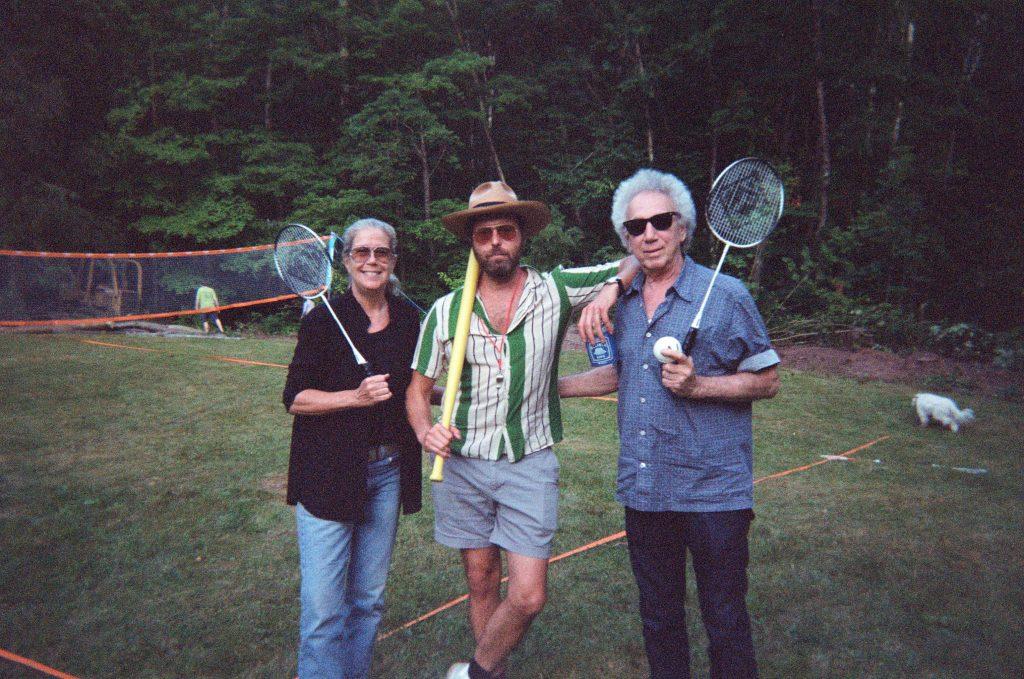 Later that day, I went to visit Casey Kelbaugh at Stony Clove in Edgewood This photo (right to left) is of Bob Gruen, Casey, and painter Elizabeth Gregory-Gruen. Nate Freeman showed up, who started Wet Paint and wrote it for three months from Casey’s during the beginning of Covid. He was there with his wife Lucy Charlesworth Freeman and their 11-day old daughter, Lady Charlesworth Freeman. Needless to say, it was Lady’s first party and maiden voyage into the Catskill Mountains. 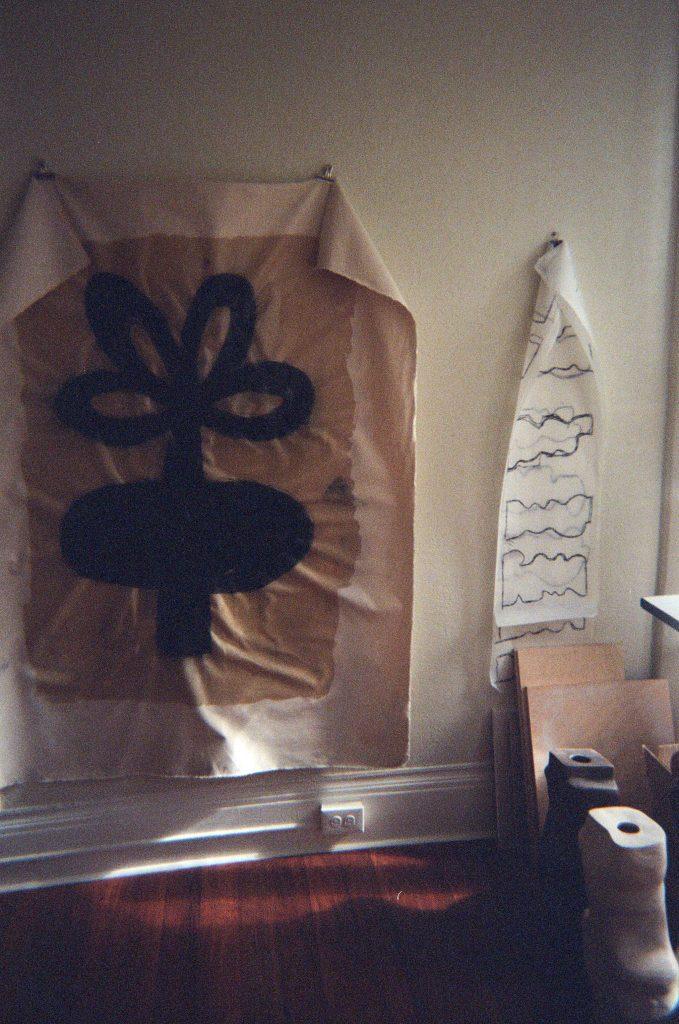 Made it back to my studio on the West Coast—thank God. This is a current work in progress I am exploring, sculptural paintings of canvas, charcoal, and resin. I love how the resin keeps the canvas creases permanent and looking wet.