Home News What Does K-Pop Star RM Collect? Here Are 8 Artists the Burgeoning... 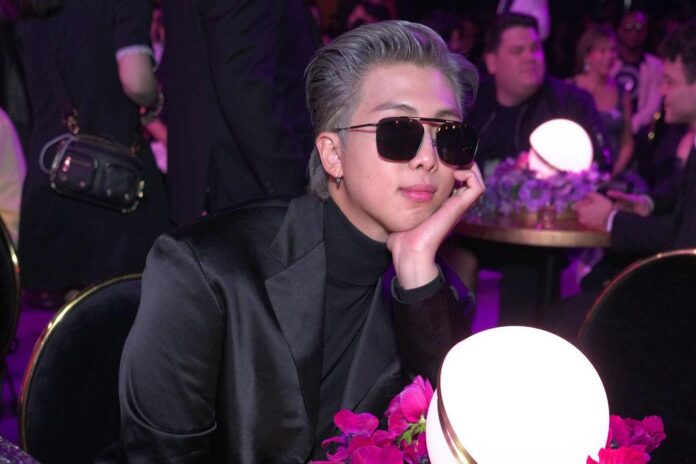 Kim Namjoon, more famously known as RM (short for “Rap Monster”) and a founding member of the mega-popular Korean band BTS, is equally adept in art galleries as he is laying down  tracks. The K-Pop star’s art adventures started when he was on tour in the American Midwest in 2018, he recently told Art Basel director Marc Spiegler, on the podcast “Intersections.” (RM also told Spiegler that he reads Artnet every morning, so—hello there RM!)

At the time, the singer found himself alone in a hotel room in Chicago. He hadn’t made many friends abroad, and doesn’t party much, so he set out to visit the Art Institute of Chicago, where he fell for Seurat and Monet.

Since then, fans have literally traced RM’s art-trekking steps via Instagram through the Getty in Los Angeles, the Metropolitan Museum in New York, and the Chinati Foundation in Marfa, Texas. They have also vicariously jet-setted with him to Basel, where he promoted the arts and culture of his home country on a global stage, and hopped with him between galleries, museum openings, and fairs across Korea. To celebrate his 26th birthday in 2020, RM donated more than $80,000 to South Korea’s National Museum of Modern and Contemporary Art.

Even his given name, Kim Namjoon, has become a verb, with fans taking part in his art-loving habits and calling it “Namjooning.”

And in just a few short years, RM has amassed a nuanced collection. He has also teased plans to open his own private exhibition space, with a cafe on the first floor—someday.

Until then, RM’s collection focuses on Korean artists and Impressionism, with a strong dash of contemporary art flash. And as BTS takes a hiatus, and RM sets off on his own next chapter as an arts patron, he aspires to emulate the reinvention and staying power of his art idols, like Phillip Guston and Donald Judd. Here are some of the other artists the Korean collector admires enough to own.

On “Intersections,” Spiegler asked RM what the first work of art he ever bought was. RM said he snapped up an untitled, ethereal painting by the late Korean artist Lee Daewon at auction, simply referring to it as “a small mountain painted in 1976.” RM considers this first acquisition as a spiritual experience: “When I set it up on my wall, then I understood what’s making a collection [versus] filling the walls,” he told Spiegler.

이승현, 시골인상
Lee Seunghyun, Countryside Impression
₩1,400,000
From Galleries Art Fair 2020 (he probably bought it there cause of the name sticker; they do it when a painting is sold) 🐨@BTS_twt #RM #알엠 #남준 #김남준 #BTS #Namjoon pic.twitter.com/kVdXToKWhz

Fans who can’t follow RM in the flesh document his movements online. In March 2020, one account tweeted that RM likely bought a modestly sized work of oil on canvas titled by Lee Seunghyun at Galleries Art Fair in 2020 for just over $1,000. Featuring RM in the gallery booth alongside his pup Moni, the tweet posits that RM “probably bought it there cause of the name sticker; they do it when a painting is sold.”

Painter Joung Young Ju Thanks BTS’s RM For Sending A Photo Of The Painting He Boughthttps://t.co/HHYNfCx7LD

In the spring of 2020, RM also acquired a luminescent landscape by Joung Young Ju. The contemporary Korean artist depicts traditional hillside villages, which have been disappearing due to urban development. She crafts their roofs, gates, and the stars above using traditional hanji paper. EconoTimes said RM bought the 120-inch acrylic art piece for $42,330. Young Ju took to Instagram to thank him. “I had a great time with such as respectful and bright young man,” she wrote, per Koreaboo. “He gave me strength during the hard times we are having now.” 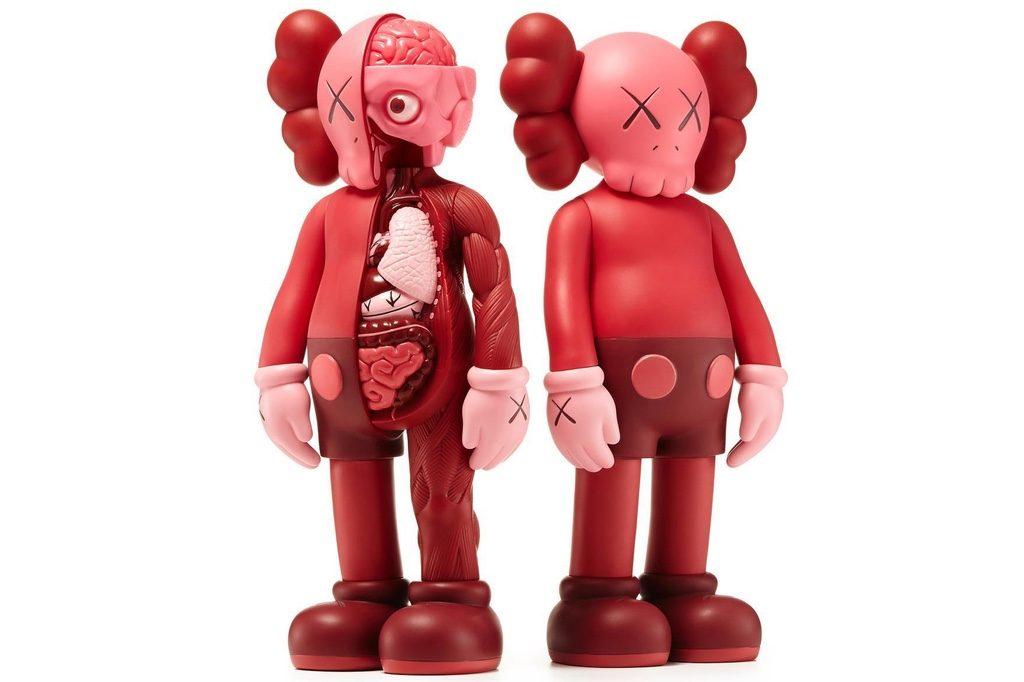 Two KAWS companions. The one on the right is similar to RM’s.

The just published an interview with RM contemplating the musician’s art explorations through the lens of his forthcoming 30th birthday—and the end of his viability as a boyband frontman. The publication peered into the work RM collects, including a “Companion” piece by KAWS. But that is not the only work by the artist he owns. In 2020, RM was also pictured holding a smaller, chrome-plated “Companion.” 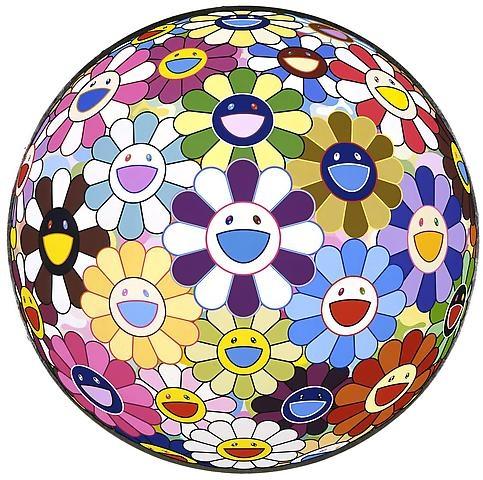 The exploration into RM’s studio also featured a rich patchwork of smaller pieces by mostly Korean artists, including Suh Seung-Won, Yun Hyong-keun, and Park Soo Keun, as well as the Swiss artist Ugo Rondinone. But Japanese legend Takashi Murakami crowns the quilt, with his ubiquitous beaming off the wall. Like KAWS, owning a Murakami is a status symbol—even if it’s a culturally rich one. RM’s not afraid to flex both arms at once. 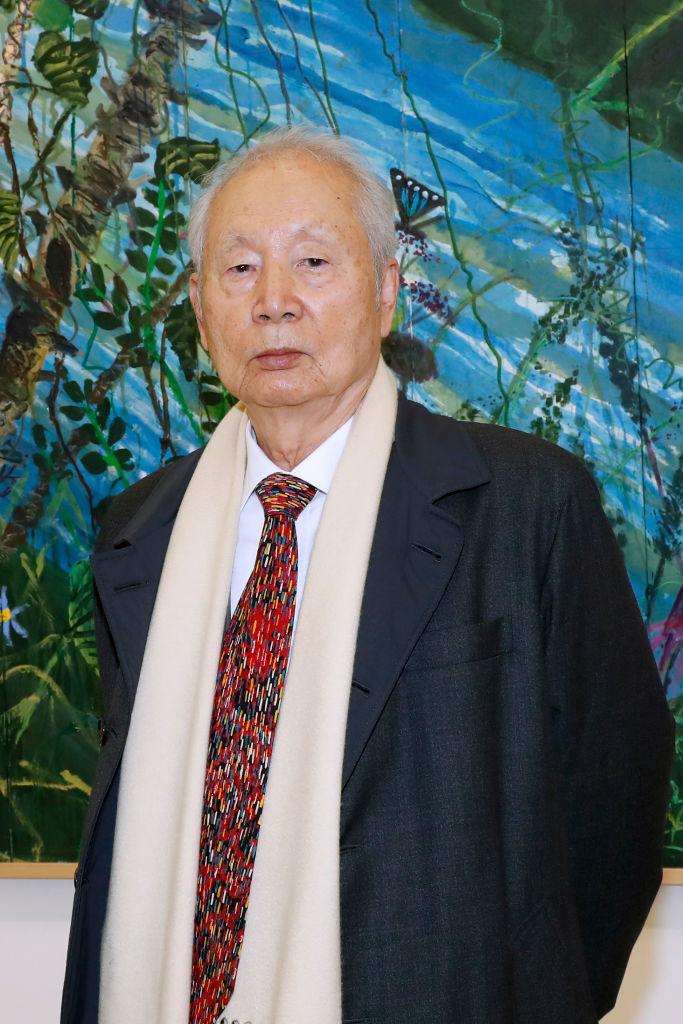 The Korean artist Kim Chong Hak also appears on RM’s studio wall in that profile. However, a tour through RM’s art collection posted in January 2022 by a user on the American website All K Pop shows RM has more work by Kim Chong Hak in his home. According to the 85-year-old artist’s bio, Kim often draws on the natural world in his canvases, including Mount Seorak, the third-highest mountain in Korea, found in the country’s east, as well as motifs such as flowers, insects, and weeds.

London-based French illustrator Thibaud Hérem displayed his latest artwork alongside its presumed new owner in an April 2022 Instagram post. “Herem x RM,” the caption reads simply. “Cherry blossom bunjae.” Fans have since wondered whether the BTS star commissioned the work directly from the artist. At nearly 120,000 likes, it’s by far the most engaged post on Hérem’s feed, an example of the outsized impact RM’s magic touch can have.

And that touch can translate to real money. When the website KBizoom reported rumors that RM collects Kim He-Soo’s work, it caused the contemporary Cubist painter’s sales to skyrocket at Art Bursan in 2022, where he allegedly sold “121 pieces within 3 hours of opening.” While we’d need to see the receipts to believe those numbers, one definite acquisition came in January 2021, when RM gifted his friend and fellow singer Colde with a canvas from the artist.