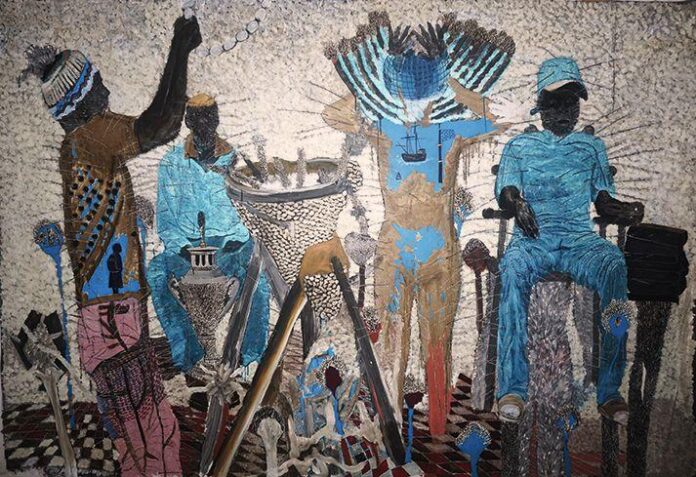 As if Covid-related shipping bottlenecks and changing import and export regimens had not already made international fair participation logistically daunting, four overseas galleries—three of which are concurrently showing in Armory Week fairs—are inaugurating new spaces in Manhattan this month.

Galerie Templon, which has locations in Paris and Brussels and a stand at The Armory Show, is taking over the former Kasmin storefront at the corner of Tenth Avenue and West 27th Street in Chelsea. “One of the goals of the new gallery is to promote our artists who currently do not have representation in New York,” gallery director Mathieu Templon says. The gallery’s inaugural New York show is a solo exhibition by Senegalese artist Omar Ba (7 September-22 October), who is also debuting a large-scale work at the Alliance Française and preparing for a show at the Baltimore Museum of Art in November. Templon adds, “His new paintings explore the perception of Black communities around the globe and one particular aspect looks at how the Black Lives Matter movement has had a direct impact on African youth.”

A few blocks south, the Manila-based gallery Silverlens is taking over the former Bryce Wolkowitz Gallery space on West 24th Street while also participating in The Armory Show. The gallery is inaugurating its New York outpost with solo shows by the Philippines-based video and installation artist Martha Atienza and the Malaysian artist Yee I-Lann (both 8 September-5 November).

The gallery’s co-owners, Rachel Rillo and Isa Lorenzo, say the move was “necessary because artists from our part of the world have almost no representation in New York”. They add, “We feel that it is the right moment as there is a huge interest in other artists outside of the Western canon—mixed race artists, diasporic artists, LGBTQI artists—and that is us.”

Across town, the London-based secondary market gallery Luxembourg + Co is showing works by Joan Miró at the Independent art fair and at its new outpost in the historic Fuller Building on 57th Street (7 September-26 November). The decision to launch the new location with Miró made particular sense, gallery partner Alma Luxembourg says, because “it was in the Fuller building in 1932 that Pierre Matisse opened Miró’s first exhibition in the United States, launching a hugely successful cross-Atlantic collaboration that would come to be recognised as a landmark in both the artist and the gallerist’s careers”.

And further uptown, the Berlin-, London- and Los Angeles-based gallery Sprüth Magers—which skipped Armory Week, but is coming off the inaugural edition of Frieze Seoul—is adding an Upper East Side outpost to its network. The inaugural show there, organised by former Los Angeles County Museum of Art curator Nana Bahlmann, showcases around 60 of the rarely-seen maquettes the late John Baldessari created as preparation for his large-scale works (9 September-29 October). The location, in a second-floor space on East 80th Street, is just steps from the Metropolitan Museum, where Baldessari’s career-crowning retrospective, Pure Beauty, opened in 2010.