Home Art market Cambodia Says the The Metropolitan Museum of Art Has Dozens of Its... 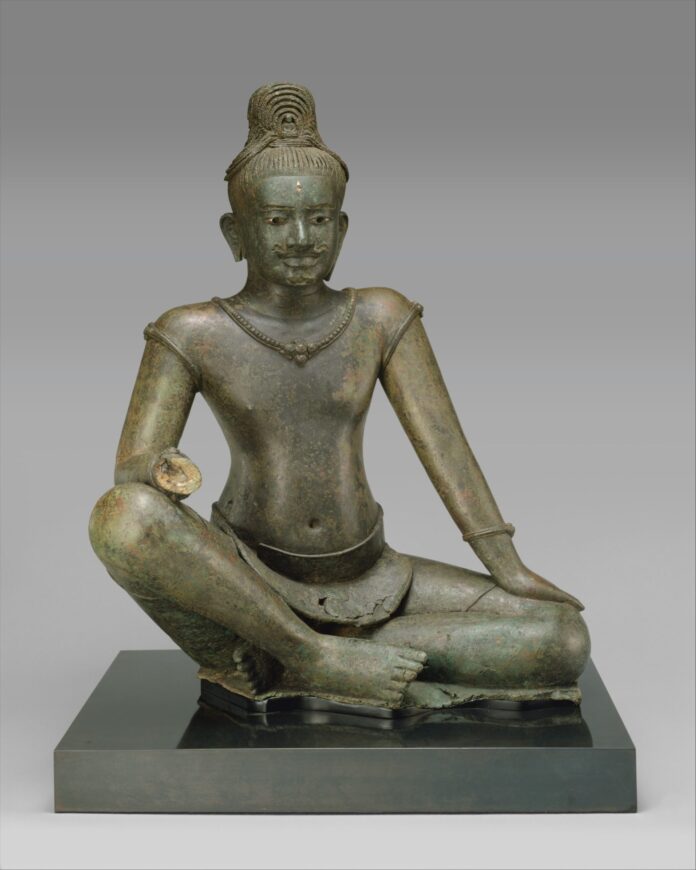 An investigation by the Cambodian government flagged 45 “highly significant” items in the museum’s collection as looted.

Responding to pressure from the government of Cambodia, the Metropolitan Museum of Art in New York said it has begun reviewing dozens of allegedly looted Khmer Empire artifacts in its collection.

According to the New York Times, representatives from the US Attorney’s Office, which has previously assisted Cambodia in recovering stolen antiquities, met with museum staffers earlier this month to request a review of the provenance of several items in the Met’s collection. This follows an investigation by the Cambodian government, which flagged 45 “highly significant” items in the museum’s collection as illicit artifacts that were pillaged during decades of civil war and genocide in the country between 1970 and 2000.

In a statement to Hyperallergic, a spokesperson for the Met said: “In light of new information on some pieces in our collection, we reached out to the US Attorney’s office — to volunteer that we are happy to cooperate with any inquiry.”

“The Met has a long and well-documented history of responding to claims regarding works of art, restituting objects where appropriate, being transparent about the provenance of works in the collection, and supporting further research and scholarship by sharing all known ownership history,” the statement continued, adding that the museum is committed to working “proactively” to respond to “new information or questions about any pieces.”

An investigation by the Washington Post, published on October 5, linked 12 Khmer artifacts in the Met’s collection to offshore accounts that belonged to indicted antiquities dealer Douglas Latchford. This information was revealed in the Pandora Papers investigation, based on a massive leak of hidden offshore accounts to the International Consortium of Investigative Journalists and shared with over 150 media outlets. Latchford, who was charged with trafficking in stolen and looted Cambodian objects by the US Justice Department in 2019, died last year before facing court. Following these revelations, the Denver Art Museum announced last week that it will return four pieces to Cambodia acquired via the disgraced dealer.

Erin L. Thompson, an associate professor of art crime at CUNY’s John Jay College of Criminal Justice who specializes in art theft and forgery, criticized the Met’s statement in an interview with Hyperallergic.

“The Met seems to claim it did the right thing by contacting the District Attorney’s office but never reached out to Cambodia,” the professor said. “Nor does it seem that the Met even provided any information to the DA. This is not helping stolen art return home. This is saying ‘catch me if you can.’”

“Latchford has long been notorious for dealing in looted antiquities,” Thompson continued, “So notorious that museums should assume that antiquities sourced from him were looted, and should repatriate them unless they can prove otherwise, rather than acting as though they had fulfilled all their ethical obligations by sitting back and saying they would be happy to hear others prove exactly when and where the artifacts were stolen.”

If the Met decides to repatriate the 45 items, it will follow a precedent set in 2013 when it returned two Khmer statues traded by Latchford to Cambodia.

Cambodian officials added that they questioned about 150 other artifacts in the Met’s collection beyond the 45 mentioned. They said that most of these artifacts were acquired by the museum between the years 1977 and 2003.

“It surprises me and disappoints me that there are so many statues of ours in the Met,” Cambodia’s Culture Minister Phoeurng Sackona told the Times. “We want to see the truth come out, we want to see all the facts come out about this. We want them all returned.”

Google Doodle It’s About Naziha Salim, One of Iraq’s Most Influential Painters

Palestinian Art and Identity Takes Centerstage in Venice During the Biennale