Home Events Fine art Edvard Munch: ‘Between the Clock and the Bed’ 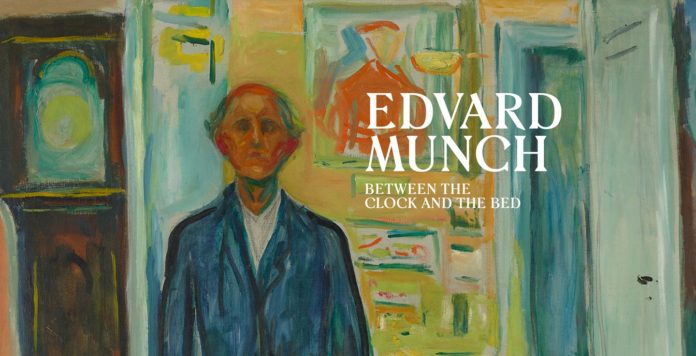 A new exhibition positions Edvard Munch as a revolutionary whose personal tragedies peppered his work, and made him more than a symbolist scream.

The thematic arrangement of the exhibition will reveal the frequency with which Munch revisited and reworked certain subjects. It will present him as an artist who was as revolutionary in the 20th century, as he was when he made a name for himself in the Symbolist era. Major themes and motifs of Munch’s last paintings can be traced back to his earlier works. Displaying his early and late works together allows visitors to identify innovations in composition, treatment, and technique.

Born and raised in Norway, Edvard Munch was one of the most celebrated and controversial artists of his generation. With only brief formal training in painting, Munch was largely self-taught. He was a prolific artist, creating approximately 1,750 paintings, 18,000 prints, and 4,500 watercolors, in addition to sculpture, graphic art, theater design, and film. Munch was associated with the Symbolist and Expressionist movements and their legacies. He exhibited widely throughout Europe, affecting the trajectory of modernism in France, Germany, and Norway. His influence can be seen in the work of such artists as Georg Baselitz, Marlene Dumas, Katharina Grosse, Asger Jorn, Bridget Riley, and Jasper Johns, among others.

Self-Portrait Between the Clock and the Bed (1940-43). Few artists have ever seen their own old age with such terrifying clarity as Munch. Compared with this illusionless recognition of imminent mortality, the late works of Rembrandt seem self-congratulatory. Time is ticking away in the shape of a solemn grandfather clock. A single bed, covered with a stylish modern pattern of diagonal lines, testifies to his solitude. The artist himself seems frozen, flattened, already seeing himself as a stiffened corpse. He was to die, soon after painting this austere farewell, in 1944.
The Sick Child (1907). The shadows that swarmed Munch’s imagination came to him in his childhood when his mother and sister both died of tuberculosis. The loss of his sister struck him terribly and is the theme of one of his first truly personal paintings, The Sick Child, which he originally painted in 1885-6 when he was in his early 20s. This unadorned and utterly heartbreaking deathbed scene haunted him so much he repainted it six times. In this 1907 version the colours are fired by the freedom of expressionism but the pain is as unbearable as it ever was.
Self-Portrait with Burning Cigarette (1895). Munch indulges his melodramatic side in this haunting image of fin-de-siècle sophistication and unease. Looking out of the shadows of the night, his face eerily illuminated as if by theatre lighting, he looks like a sinister character in a play. Standing on stage, cigarette in his fingers, he is about to tell us a ghost story or some other kind of chilling tale. This is the Munch who in paintings of vampires and skeleton lovers gave shape to the late 19th-century horror fiction of Bram Stoker and Robert Louis Stevenson.
Sick Mood at Sunset, Despair (1892). The same wooden railing, the same sweeping perspective and even a very similar blood red smear of sky over the stain-like blot of the fjord – this painting visibly anticipates The Scream, which Munch was to picture for the first time in 1893. Here we see the suffering of humanity from the outside, not the inside. The difference between the two images reveals how radically Munch broke with the romantic tradition when he replaced this sympathetic figure of introspection with a symbolist howling ghoul.
Self-Portrait in Hell (1903).This bold and strange self-image could scarcely tell us more clearly that Munch is in a bad place. The flames and smoke of hell itself rise around him – but is he a damned soul or a devil? Naked from the waist, his body golden in the firelight, his face a demonic red mask, he looks horribly at home in hell. Perhaps the true artist belongs there?
The Dance of Life (1925). Some people fall in love and their love is reciprocated. Others get caught up in sinister, scary, cruel relationships like the woman who’s dancing with a green-faced phantom. Some remain alone, like the woman in white, while others are widowed, like the woman in black. This painting expresses Munch’s view of life as a dance of desire and fate in front of an eerie pale moon reflected in the dead-still sea on a Scandinavian summer’s night. It was so important to him as a statement of his pessimistic philosophy that he painted it twice, first in 1900, again in 1925.
The Night Wanderer (1923-24). Munch exposes his own weakness and loneliness in this self-portrait stripped of all pomposity or self-regard. We see him not as artist here but simply an ageing, uneasy, isolated man walking around his house at night, peering at us with mystified unease. His hollow-eyed look makes him a walking embodiment of the empty blue night behind him, a man who the dark has got inside. Munch had painted nightmares in his youth in visions of terrifying symbolism like The Scream, yet the calm directness and observation of this later work is just as scary, if not scarier.
Self-Portrait with Bottles (1938). The old artist confesses yet another weakness, this time for booze. Toothless and red-faced, he reaches for an array of bottles. The colours are pretty and pale, in a way that makes your flesh crawl: for these purples, greens and yellows are desperate in their very brightness. By leaving parts of the picture surface uncovered by the thin layer of paint Munch suggests a superficiality to the brightness, a lack of conviction. Under the old artist’s attempt at colourful jollity, he makes plain, life is hell. No wonder he needs a drink.