Home News 10 Buzzy Gallery Shows Not to Miss in New York This Month,... 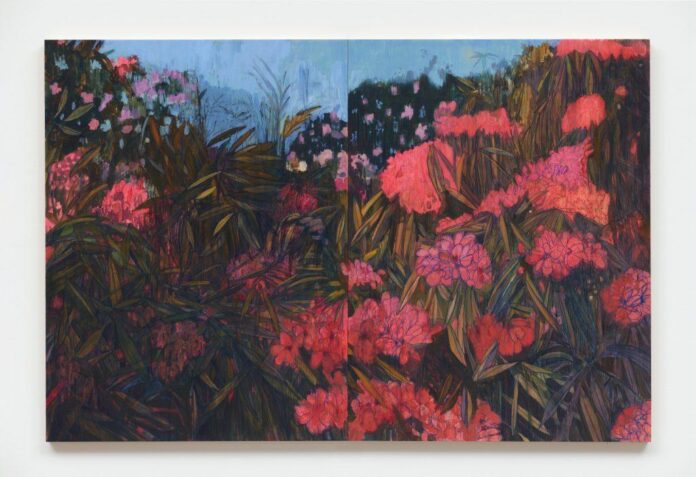 Now that the art world is back in full swing, we’ve rounded up 10 can’t-miss gallery shows taking place around New York City in the coming weeks. From conceptual photographic collages to a re-creation of a sun-drenched summer studio to lacy, laser-cut sculptures that act almost as lanterns, the slate is full of returning talents and fresh new voices. 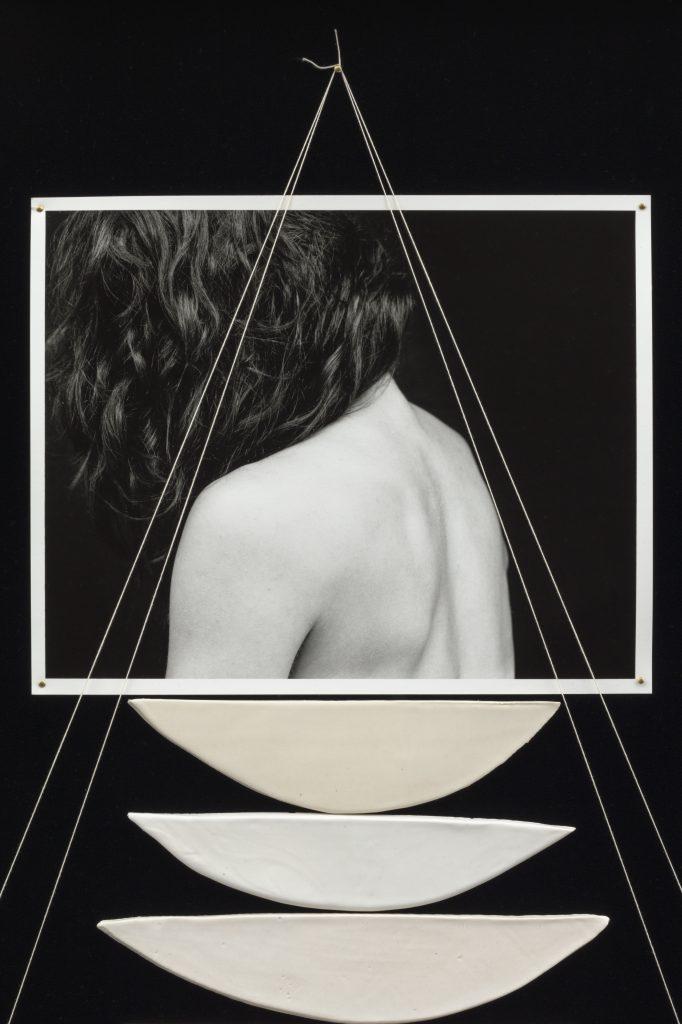 Iranian artist Sheree Hovsepian’s latest body of work builds on her interest in probing the limits of photography as a technical and conceptual medium. Against a stark black background, images collaged with wood, ceramics, velvet, and string combine to form shadowbox-like assemblages;  geometric lines are juxtaposed with fragments of the female body. 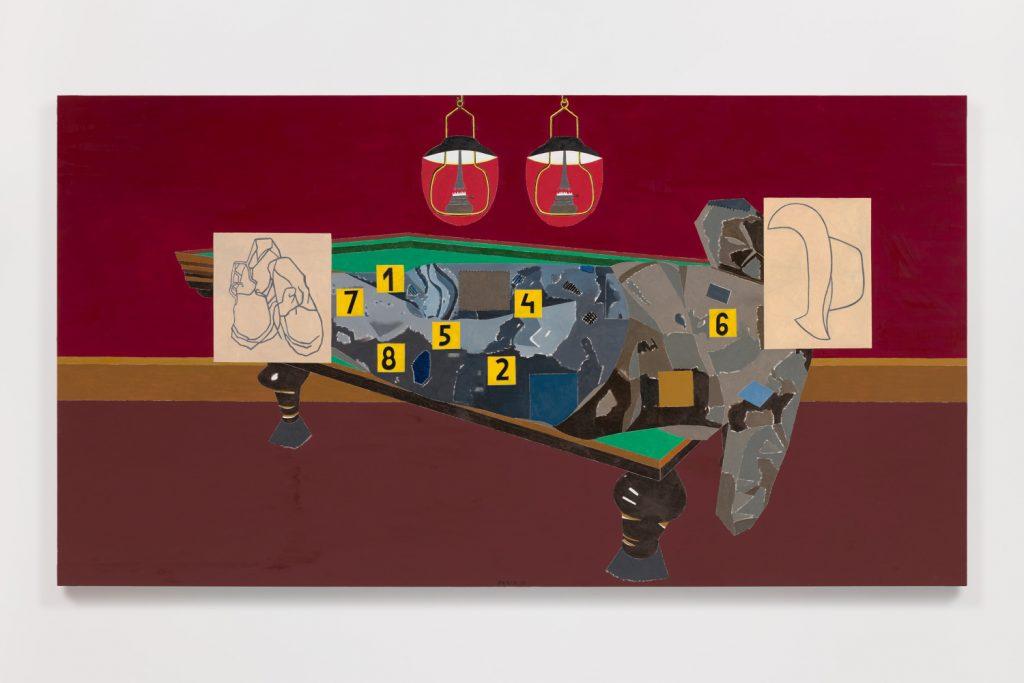 More than 70 works by the late Spanish artist are on view, spotlighting an important European artist not widely known in the United States. With irony and wit, Arroyo’s artworks nod to early 20th-century artists like Francis Picabia and Marcel Duchamp, but are cloaked in a Pop Art aesthetic.

For her fourth exhibition at 303 Gallery, the experimental abstractionist Mary Heilmann has turned the white cube into something of an extension of her Bridgehampton studio, filled with ceramics, paintings, and her signature painted plywood chairs and tables. A native of California, Heilmann distills the sea and sun into perfectly captured moments across her mediums.

“Anila Quayyum Agha: A Moment to Consider” at Sundaram Tagore
Through October 8, 2022 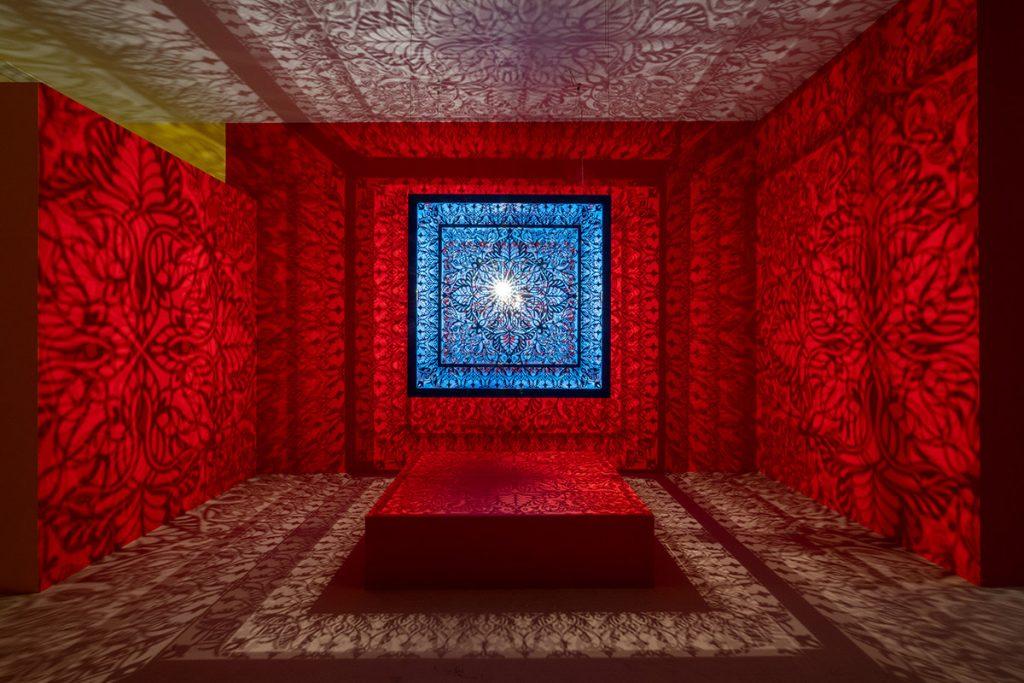 Anila Quayyum Agha, A Beautiful Despair,(2022). Courtesy of the artist.

Pakistani-American artist Anila Quayyum Agha has made a name for herself with large-scale steel cubes that she laser cuts with elaborate designs that reference Islamic geometric patterns, illuminating the sculptures to cast dramatic shadows. She’s brought one of those immersive installations, commissioned for a recent exhibition at Texas’s Amon Carter Museum of American Art, to her show at the gallery, along with embroidered drawings and a new series of resin paintings inspired by the art of pietra dura, or mosaics of cut polished stones.

“Jammie Holmes: What We Talking About” at Marianne Boesky Gallery
Through October 8, 2022 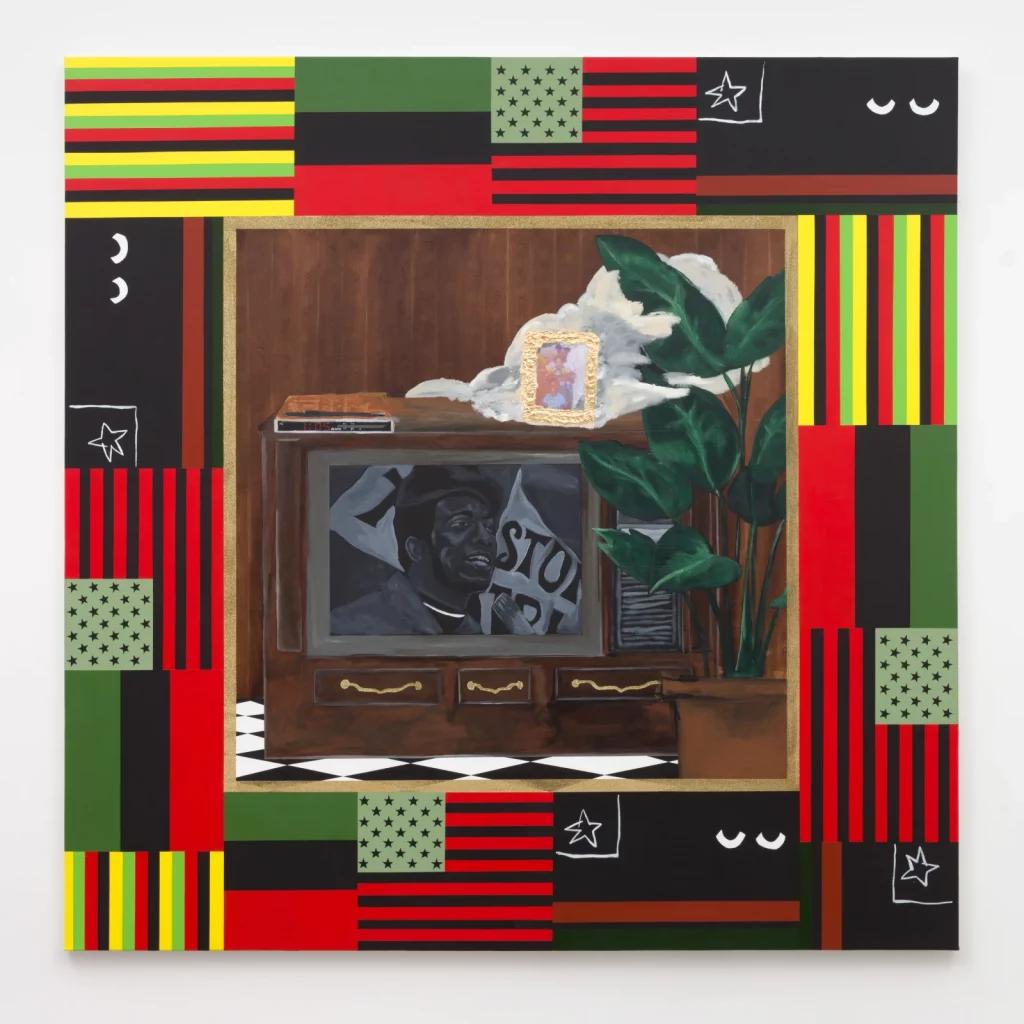 Self-taught painter Jammie Holmes’s portraits of Black subjects have become widely sought after—even though he never visited an art museum until after he turned 30. Initially inspired by the likes of Gordon Parks and Rashid Johnson, Holmes has looked to the Old Masters for these newest paintings. Placing them in ornate gold frames, the artist interrogates the term “master” though the lens of American history.

Julie Curtiss, Dancers in the dark (Moon), (2022). Courtesy of the artist and Anton Kern Gallery.

Julie Curtiss titled her latest New York exhibition for the French word for “sleepwalkers” for numerous reasons. It’s after a Federico García Lorca poem, but also a nod to her own struggles with insomnia, especially over the course of the past few years. And of course, there’s also the velvety, dreamy nature of her paintings, which seem to depict liminal states blurring the line between the real and surreal. 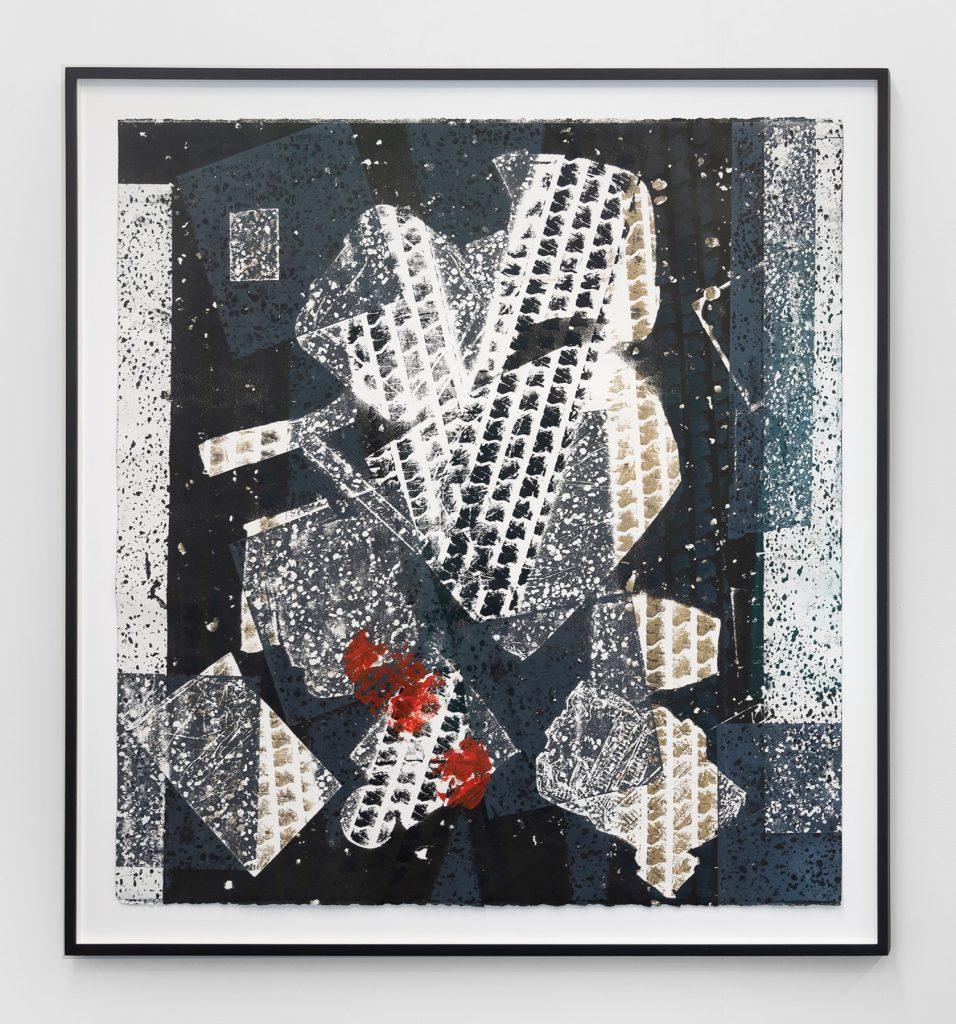 As the show’s title suggests, St. Louis-based artist Kahlil Robert Irving’s new body of ceramics and works on paper is rooted in the street, both as a physical material and the spirit of the city. Sculptures inspired by the Hellenistic city of Antioch are given a contemporary twist: created with “enameled trompe l’oeil urban refuse” like cardboard, air fresheners, and newspapers. In other works, prints of tire treads and discarded objects are aspects of the “overlooked surface of the street” that Irving says are “ignored by some, while others don’t have the option to ignore.”

“Pamela Phatsimo Sunstrum: I have withheld much more than I have written” at Galerie Lelong
Through October 22, 2022 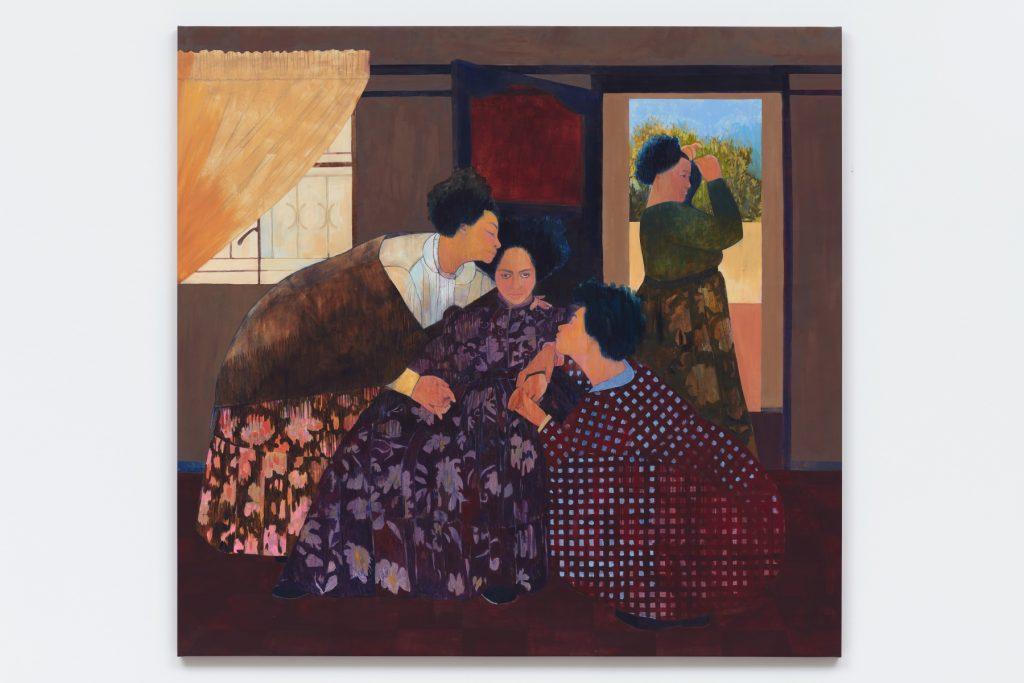 Hailing from Botswana, Pamela Phatsimo Sunstrum marks her first major New York solo show with a suite of paintings and a large video installation, Mumbo Jumbo and the Committee (2022). For this, the artist has created a theatrical setting in which to view the work, with the audience seated in wooden pews before the piece. She was inspired by Louis-Jacques-Mandé Daguerre’s dioramas, a cinematic forerunner that involved using special lighting techniques so that a single painting would appear to become a moving picture. 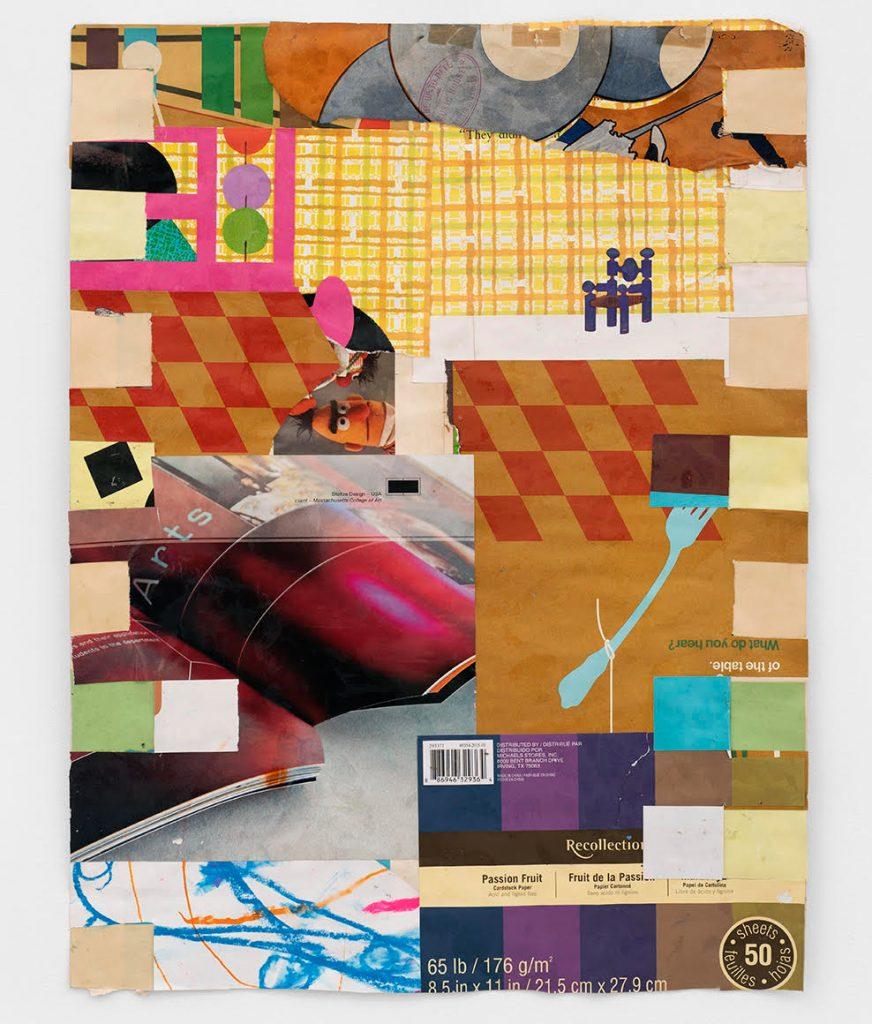 The artist, performer, and found-object enthusiast Brian Belott’s collages are a paradoxically rigorous jumble of shapes and colors, with just enough snippets of text or imagery to spark memories and make connections to objects or scenes. The title of the show is a reference to an idea the artist’s late father devised: an invention called the “reassembler” that could take shredded documents and make them whole again (in a prankish twist, the stitched papers, which presumably had been destroyed for a reason, would then be sold back to the owner on eBay). 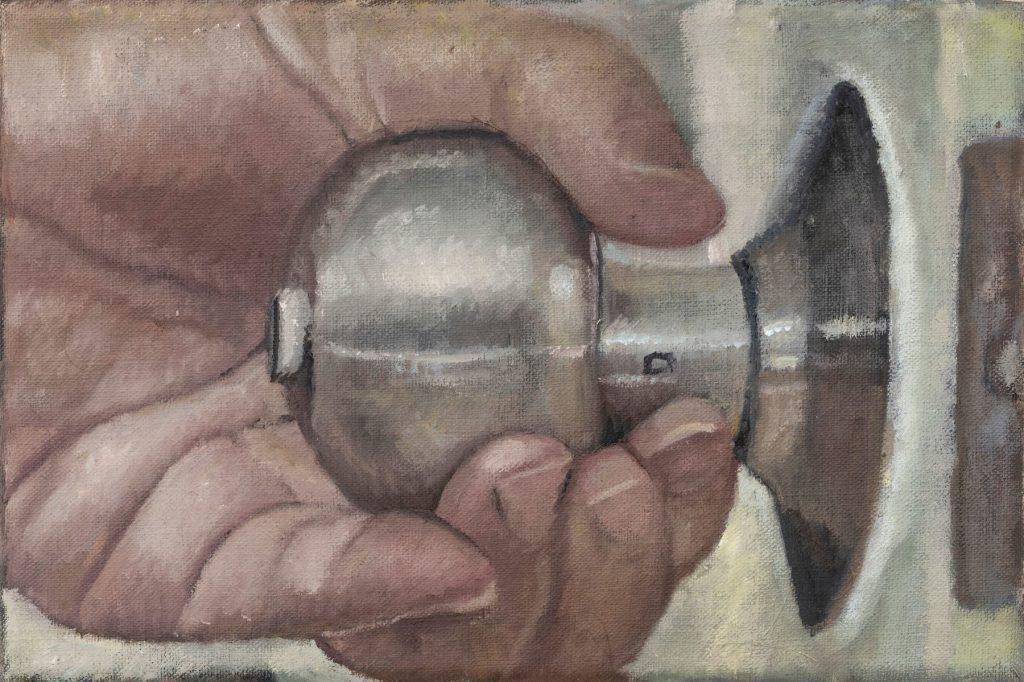 “What does ‘from life’ even mean in this day and age?” asks the musician and painter Issy Wood, though the answer could be her canvases themselves. Slightly blurred, even pixelated, and yet so clear, her paintings have a surreal tinge even as they isolate moments of banality.

Art Industry News: Tate Shells Out a Six-Figure Settlement to Artists Who Sued Over Discrimination + Other Stories

A New York Judge Has Ordered Pace Gallery to Pay $6.3 Million to a Real Estate Firm