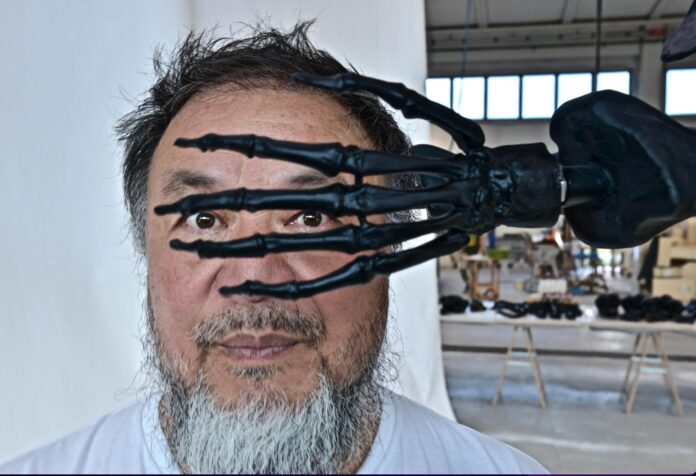 “No! it’s not about creating cute little beauty pieces” Ai Weiwei tells The Art Newspaper from his home in Lisbon. He’s referring to his monumental glass work The Human Comedy—one of the largest suspended Murano glass sculpture ever created. It is the centrepiece of a new show of 32 new and recent sculptures by the Chinese dissident artist, staged in a 16th-century church on the Venetian island of San Giorgio Maggiore.

At around 6 metres long and 9 metres high, the giant glass sculpture, which resembles a black chandelier, is composed of 2,000 handblown glass pieces, including human skulls, skeletons, internal organs, bones, crabs, bats, and surveillance cameras. Weighing in at 2,700kg, its title references Dante’s epic poem from the 14th century, the Divine Comedy. Though work on the sculpture began before the Covid-19 pandemic, it serves as a tribute to the many lives lost during this time.

“The theme of the show is death. The chandelier is made up of skeletons and the bones of humans, animals and mystical animals. It’s also about humanity” says Ai. “Death is always there accompanying us. But we don’t like to acknowledge it—we tend to think of it as something that happens to other people”.

This is the first time Ai will stage an exhibition of glass works, a medium he is not well-known for. The show is the result of a three-year collaboration with the Berengo Studio in the Venetian island of Murano, where much of Murano glass has been produced for the last few centuries.

For three decades, the studio, which is helmed by founder Adriano Berengo, has been working with artists from all over the world to realise projects in glass. “Ai has always known how to subvert and play with power structures and this work is no different,” Berengo said in a statement. He began smaller collaborations with the artist when he visited him under house arrest in Beijing.

But it’s not the first time the 64-year-old artist has worked with glass. “I am a collector of old ancient artefacts from China. So I have a long history in dealing with old glasses,” Ai says. Included in the show is his 2009 work Study of Perspective in Glass, a glass sculpture of a hand with its middle finger extended. “Glass is a material that is fragile and precious,” the artist says. “In ancient Greek tombs, glass was used to make tear bottles which contained the tears that the living shed for the dead.”

The exhibition also includes Remains (2015), which resembles an archaeological site and is composed of porcelain reproductions of human bones excavated from the site of a labour camp that operated under Mao Zedong in the late 1950s. “The human bones belong to my father’s generation. And there are so many exiled intellectuals that were just [left for] dead” Ai says, referencing China’s 1958 Anti-Rightist Campaign, which culminated in the purging of thousands of intellectuals including the artist’s father, the famous poet Ai Qing.

Elsewhere in the exhibition, the sprawling sculpture Glass Root shows the root system of the ancient Pequi tree, a critically endangered species indigenous to Brazil. The roots were left over from deforestation and natural causes. In order to produce cast-iron replicas, wooden sculptures were moulded. The work has added significance given that, Ai’s father, had written a poem about how trees could communicate with each other underneath the earth. From the age of 10, Ai lived in a dugout with his father.

Memories of his father are central to another exhibition Ai is involved with this year. He is curating a show of works created by prisoners and people across the UK’s criminal justice system at the Southbank Centre in London this autumn. “All these works allowed me to try and understand how people behave within limited spaces because of criminal punishment,” he said. The artist says he’s well prepared given his own life experiences with the penal system. The artist’s father was sentenced to six years imprisonment in the 1930s. Ai himself was secret detained for 81 days by Chinese authorities in 2011.

“Also in British prison, I visited Julian Assange, who is still in Britain’s most highly secured prison for no reason but as a political prisoner,” he says. In June, the WikiLeaks co-founder had his extradition from UK to US approved by the British authorities. If found guilty by a US court, he could be sentenced to 175 years in prison. It is evident that Ai is not slowing down on presenting political works that show the tension between liberty and freedom. For him, a crucial role of the artist is to cross boundaries, however perilous.

“If I see a boundary, the first idea is to cross it; to be on the other side. So of course that is dangerous and can cause hurt. The mass presumption cannot catch up with what an individual mind wants to do. But unfortunately, as an artist, that’s what we think is most important to do: to go through this uncertainty, and to tell people to be creative. It’s dangerous, but it’s necessary.”