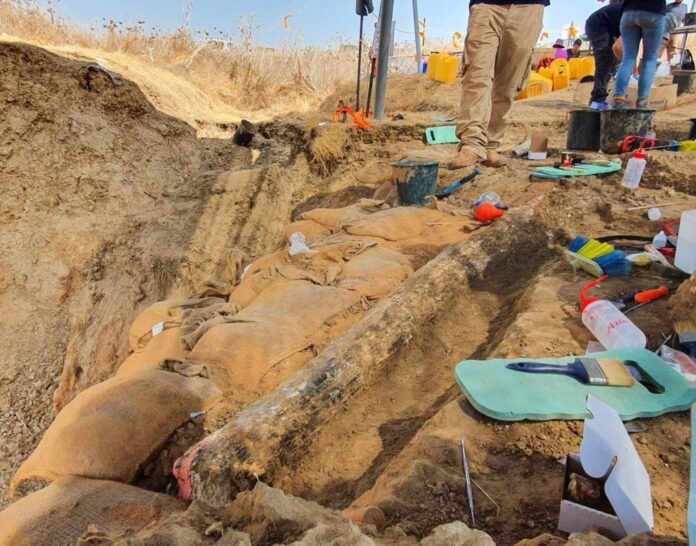 Archaeologists digging near a kibbutz in Southern Israel have come upon a giant prehistoric elephant tusk. The artifact belonged to a long-extinct straight-tusked elephant, which was hunted by early humans about half a million years ago.

According to Ari Levy, the field archaeologist at the Israel Antiquities Authority (IAA) who headed the dig, it is “the largest fossil tusk ever found at a prehistoric site in Israel or the Near East.”

The well-preserved relic measures more than eight feet in length and was first spotted by chance sticking out of the earth near Kibbutz Revadim by the biologist Eitan Mor.

After he reported it to the IAA, it took the team about two weeks to excavate it in an effort they nicknamed “Operation Elephant.”

“The fossilized tusk is extremely fragile and it is likely to disintegrate when exposed to the air and sunlight, and to human touch,” Israel Hershkovitz from the Dan David Center for Human Evolution and Biohistory at Tel Aviv University said.

The archaeologists already knew that the site had been settled during the Late Lower Paleolithic period, some 500,000 years ago, by dating stone tools and other animal remains that had been discovered previously.

The dry surrounding terrain, a plain that runs parallel to the Mediterranean coast, was probably a swamp or shallow lake during the huge elephant’s lifetime. Other large mammals that would have roamed freely at the time include hippopotami, wild cattle, and wild horses.

That the tusk has found detached from the elephant’s skull raises questions over whether it held social or spiritual meaning for humans. It remains unknown whether the tusk was intentionally brought to the site or if the elephant had been hunted in that spot.

The tusk is currently undergoing conservation and will eventually be exhibited to the public at the National Campus for the Archaeology of Israel in Jerusalem.

Marilyn Stafford, a pioneer of street and fashion photography, has died, aged 97

A Busted Trailer Listed on a Government Auction Website Turned Out to a Space Fan’s Dream: a NASA Command Vehicle