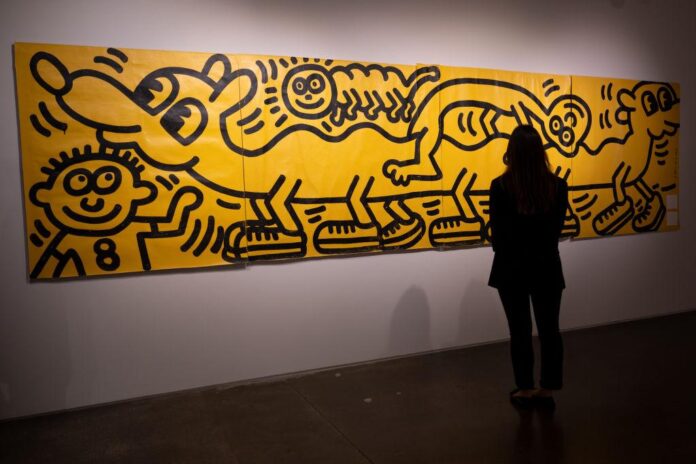 A mural once painted live by Keith Haring for the patients of the Mount Sinai children’s hospital in 1986 has been sold yesterday at Sotheby’s New York for $945,000, easily surpassing its $700,000 high estimate.

The large scale work was painted after a series of three visits to the hospital, during which the American pop artist met with individual patients on the wing to draw them their own personal artworks.

He got permission from the hospital to also paint a communal work directly onto the hospital wall. The yellow mural shows a boy in a football t-shirt waving at fantastical cartoon animals, one of which appears to be a two-headed sausage dog stretching along the painting’s 17-foot length.

“Hospitalization and illness can be traumatic for children, adolescents and families,” said Diane Rode, senior director of patient and family-centered care at Mount Sinai Kravis Children’s Hospital. “In his visits to Mount Sinai’s young patients, Keith Haring showed us the direct power and place of art, play, and imagination in humanizing healthcare.”

The work might easily have been lost to history, when the building it was housed in was demolished in 1989, to make way for a new campus. Thankfully, a staff member managed to preserve the work and it was kept in storage for more than 30 years.

A portion of the proceeds from the sale will be donated to programming and clinical care at the children’s hospital as well as outpatient locations across the city.

“We are generally not in favor of these works being sold and going into private hands because that’s not what they were meant to be,” Gil Vazquez, the executive director of the Haring Foundation, told The New York Times. But, Vazquez was pleased the mural had survived, he added, and would help fundraise for the hospital.

“The sale continues [Haring’s] spirit of generosity,” he said. “We’re happy about it.”

Haring was an activist and regular on the downtown New York art scene in the 1980s until his death in 1990 from AIDs-related complications. He produced many spontaneous murals in children’s hospitals, schools, and youth centers, as well as creating chalk drawings on the New York City subway that helped gain widespread recognition for his distinctive, playful style.

A mammoth 85-foot-wide mural that Haring produced on a wall of the Grace House, a Catholic youth center in Manhattan, was sold at Bonham’s in 2019 for $3.9 million. It was the first of his murals to hit the auction block—to the disappointment of his foundation, who did not want to see it end up in the hands of a private collector.